This is a virtual tour of the Palouse to Cascades State Park Trail, exploring the history along the route starting at Cedar Falls, WA and ending past the east end of the trail in Plummer, ID.

Each year, a group of horse riders known as the John Wayne Pioneer Wagons & Riders do a cross state ride, on the Milwaukee Road right of way across Washington State, now the Palouse to Cascades State Park Trail. They start in Easton on May 21 and end in Tekoa near the Idaho line, seventeen days later, on June 7.

In 2020, the ride was cancelled because of the pandemic. To soothe the disappointment, we partnered with the John Wayne Pioneer Wagons & Riders to hold a virtual ride on Facebook with daily posts of photos and memories that corresponded with the portion of the trail the riders would have traveled that day. Our posts focused on the history of the trail. We started the tour two days early to provide coverage of the whole trail as part of the tour.

The response to the virtual historical tour was so positive that we have published the daily content here for all to enjoy. You can click on the name of a location below to jump to a specific day of the tour or start at the first day and click the link for the next day at the bottom of the page.

Below the links you’ll find information about the people who helped pull this together, led by Cascade Rail Foundation Vice President Mark Borleske. It was Mark’s idea to provide this tour.

Stay tuned because we plan to continue adding material to this tour and also providing similar tours for other parts of the Milwaukee Road in Washington.

This virtual journey is dedicated to Milwaukee Road employees, their families and descendants. They left us with a rich legacy of history that extends across the state. 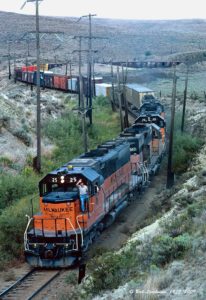 The late Milwaukee Road conductor George Katalinich can be seen waving from the lead unit on westbound train 201C as it ascends through the Heartbreak Curves toward Boylston on August 16, 1979. 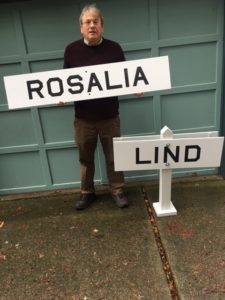 Mark Borleske is a founding member of the Cascade Rail Foundation (predecessor Friends of the South Cle Elum Depot ,1999). He has followed his passion for railroad history, outdoor recreation, and bicycling by exploring and writing about the route of the former Milwaukee Road in Washington. Much of the route is now the Palouse to Cascades Trail. Since the threatened closure of the trail in 2015, he has become an advocate for the trail on behalf of Cascade Rail Foundation and the Palouse to Cascades Trail Coalition. As a Cascade Rail Foundation volunteer he is currently involved in two trail projects in cooperation with State Parks: Renslow Trestle interpretation and the station sign project. He earned his White Scarf Award from the John Wayne Pioneer Wagons & Riders on the 2016 cross-state ride, traveling on bicycle and horse-drawn wagon.

With his wife, Kathie, they manage a small parcel of property in the Palouse hills known as Thunderhawk Ranch, along the former route of the Milwaukee Road. 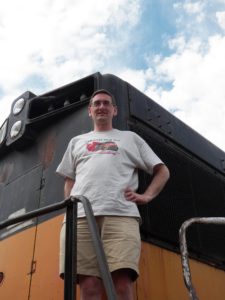 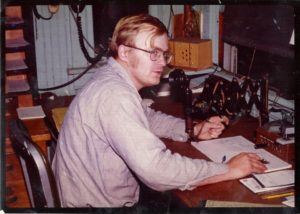 Allen Miller was a former operator/relief station agent for the Milwaukee Road. He is also a historian and artist. His drawings and cartoons of Milwaukee Road life were seen around depots, in addition to some of his poems about railroading. His maps, such as those that appear in this series, are exceptional. Allen’s insights into Milwaukee Road history, especially during the construction era and early decades, provide an amazing level of understanding. His captions to many of the historic photographs have brought the subject to life for many on this virtual tour. He has an unmatched depth of information about Milwaukee Road history in Washington, especially in very remote areas.

Allen examined engineering data and station map documents for the station sign site visits. He provided distances from key landmarks, calculated and described for each site. Out in the field, the site team was about to locate depot sites and station sign locations from Allen’s calculations.

(Photographer unknown) : Allen Miller at work in the Kent depot. 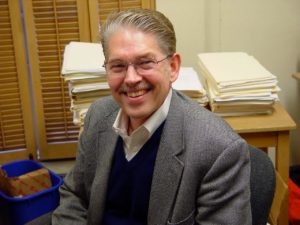 Rob Leachman is a Professor of Industrial Engineering and Operations Research at the University of California at Berkeley, as well as CEO of Leachman & Associates LLC, providing consulting and software for operations and supply chain management to corporations worldwide. During the period 1970-1975 Rob worked in the Operating and Marketing Departments of Union Pacific Railroad, often on assignments in the Pacific Northwest. These assignments provided him with opportunities to photograph Milwaukee Road Lines West. Rob also is Vice President of the Union Pacific Historical Society; he has published numerous articles in The Streamliner, quarterly magazine of the society, as well as two articles in The Milwaukee Railroader, magazine of the Milwaukee Road Historical Association.

Blair Kooistra describes himself as “just a teenager who wandered into Tideflats Yard at age 16 in 1976 and found a favorite railroad.”  Continuing, he shares that he “never left the Milwaukee–it left me when I was just about to turn 20 in March 1980. Now I’m middle age, my interests include sharing my photos and adventures along the Milwaukee Road with a generation that only knows it from old books and magazines and abandoned rights of way.” 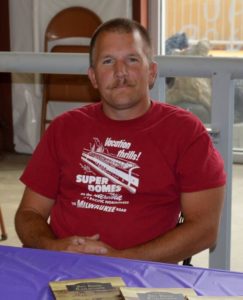 Dan Bolyard is an avid railroad historian of the Central Washington state area. He hails from deep in the heart of Northern Pacific country at Coulee City, WA.

Dan is the author of a book about the history of railroads in the Big Bend area of Washington called Big Bend Railroads. For more historical information about the Milwaukee Road and other railroads, visit Dan’s website on Central Washington railroad history at http://www.bigbendrailroadhistory.com/ 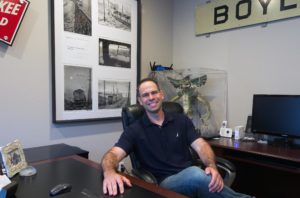 Greg Lussier provided research and captioning assistance, especially on the Renslow to Beverly part of the tour. He is known for his extensive railroad research on Boylston Hill, known as “Desolate Bliss”. His passion and curiosity for what life was like for those that lived where they worked in such a remote area fueled his interests to learn more about a railroad that he never knew personally. His knowledge extends with an emphasis on the relationships and interactions between the railroad and its neighbors, including some of the earliest settlers in the area.

Ryan Reed of Cheney provided research and capiton assistance. His favorite territory of the Milwaukee Road is “the Gap”, from Othello through eastern Washington to Avery,Idaho.