Our virtual tour on the Milwaukee Road takes us further east into the scenic Palouse countryside to Tekoa and its towering trestle. We pass through hills, traverse a sweeping curve, cross a short but impressive steel bridge at an old country road crossing, pass a classic grain elevator, and arrive in the community of Tekoa. At Tekoa, we virtually travel across an expansive steel trestle. Miles of history continue to unfold as we pass through scenic landscapes of the Palouse on the route of the Milwaukee Road. 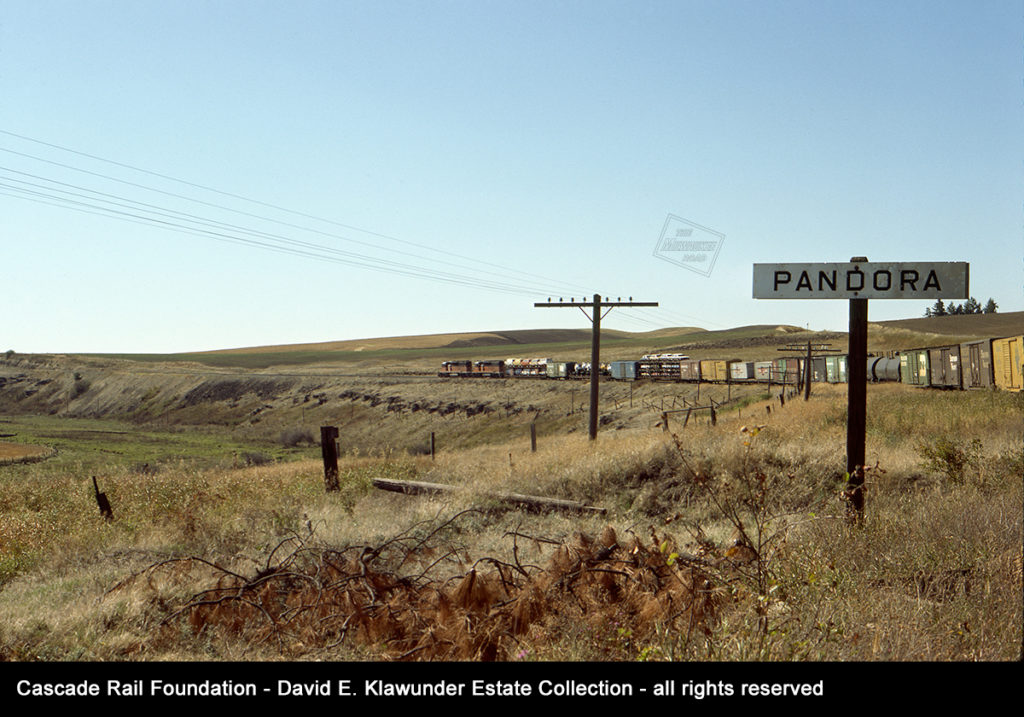 A westbound freight  rounds a sweeping curve as it passes the station sign at Pandora on September 21, 1975. This was the east end of a passing track.

Turning to look east, near the east switch of the passing track stood the station sign. Beyond the station sign is a typical Milwaukee-style phone booth and the distinctive pine tree that was a landmark for this remote spot. To the right of the station sign is the bridge over Cabbage Creek, EE-80, described as a 14-span ballasted deck bridge. The pole to the right carries communication lines for the company telephone system. In an earlier day, it carried telegraph lines.

To the left of the phone booth, the “V” shaped marker on a signpost is for flanger operator to raise the blade of his plow to avoid striking an obstacle. Flanger markers identified grade crossings, track switches, guardrails and other obstruction hazards to snow flangers plowing between the rails in wintertime. In this case, it marks the location of the siding switch.

This photograph was taken the same day as the photo above, September 21,1975. 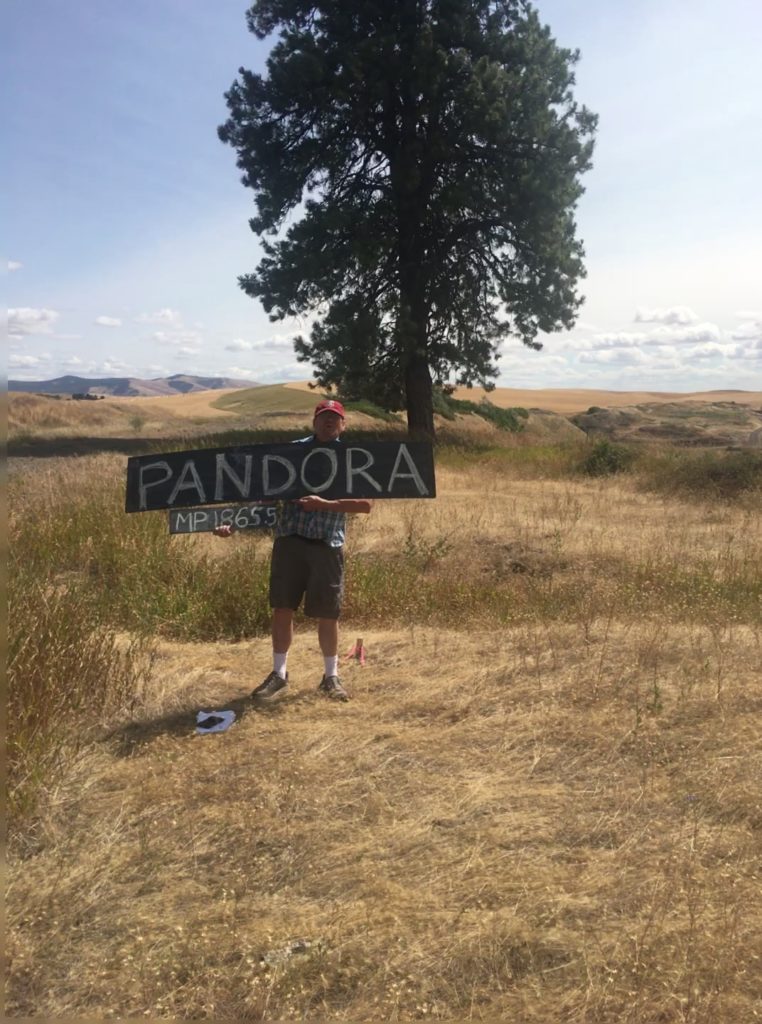 This is a more recent view at Pandora, looking east from a similar vantage point as the photo immediately above. The pine tree still stands out as a distinctive landmark for this location. Note to the right, the grade abruptly dips where the Cabbage Creek Bridge was removed. This is just one minor detour of several to accommodate missing pile bridges in the area.

Here we’ve turned west to look at Pandora curve. This location was a favorite for David Klawunder and other photographers. This view shows the wide sweep of the curve, comparable to the Klawunder photo above of a westbound train some 43 years earlier. 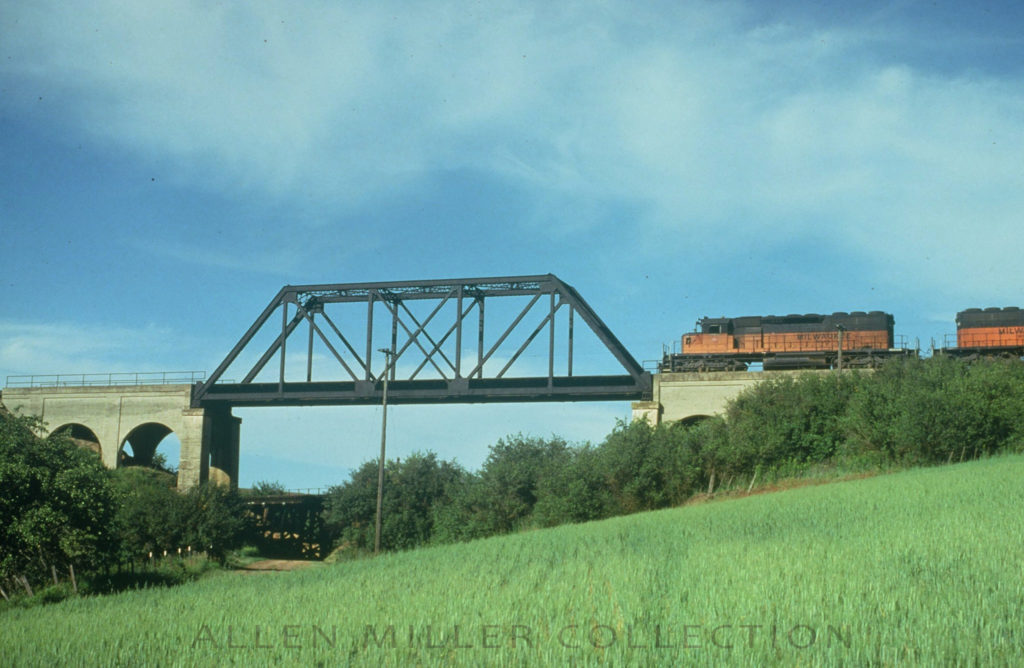 Westbound Milwaukee Road freight train 201 crosses the distinctive steel bridge at Seabury in this June 28, 1979 view. Like many of the Milwaukee Road bridges in this area, the North Fork Pine Creek crossing of bridge EE-70 started out as a 46-span timber trestle, 721 feet long and 67 feet high. At some point it was rebuilt and divided into bridges EE-70A and EE-70B.

EE-70A is the more prominent structure, consisting of a 130-foot long steel span bracketed by two concrete approach structures. One of the approach structures is 86 feet long and the other is 66-feet long. It was built to carry the Milwaukee Road over the line of the Spokane & Inland Empire interurban.

EE-70B is a “Y” shaped concrete arch culvert, with a 148-foot main culvert under the Milwaukee Road mainline and two branches.  The west branch is 108 feet long and the east branch extends 133 feet, going under the Spokane & Inland Empire line.

Narrative information from Allen Miller and photo from his collection. 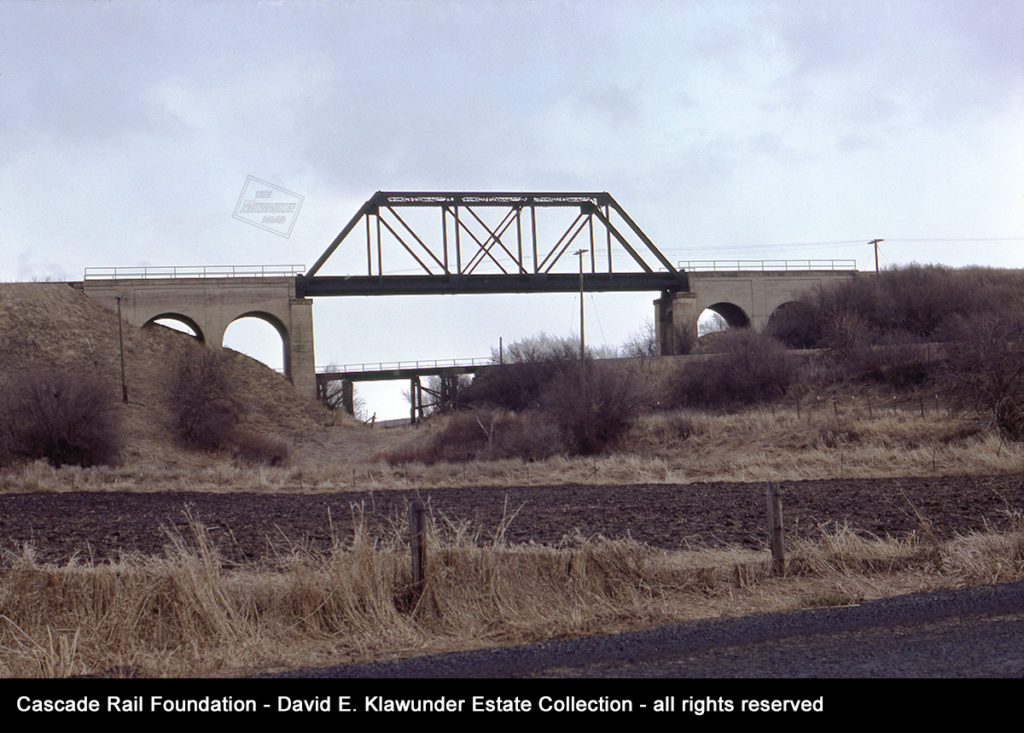 In this March 23, 1975 view of Seabury, we can more clearly see the Spokane & Inland Empire interurban  The pile bridge of the interurban is visible below bridge EE-70A. A farm road goes under the interurban bridge,creating a three-level crossing. By this time, the former interuban route has become a branch line of the Burlington Northern system. 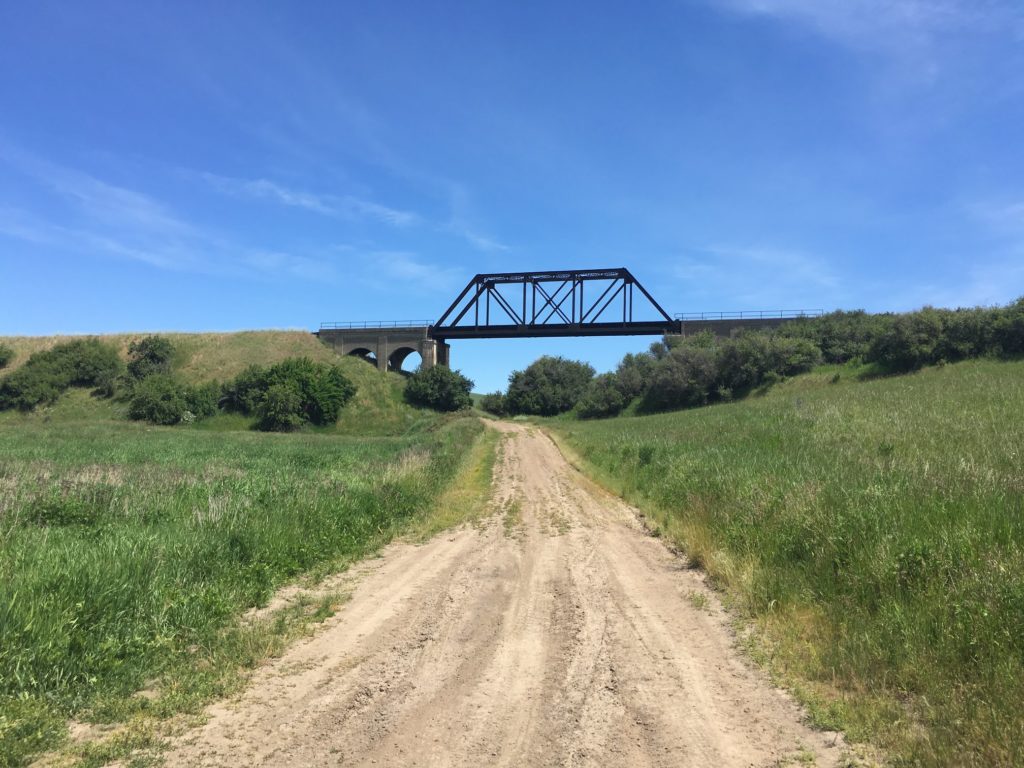 Today, the former interurban route at Seabury is long gone. The Milwaukee Road is gone too, replaced by a trail. The farm road in the foreground is the only part of the distinctive three-level crossing still being used for its original purpose. 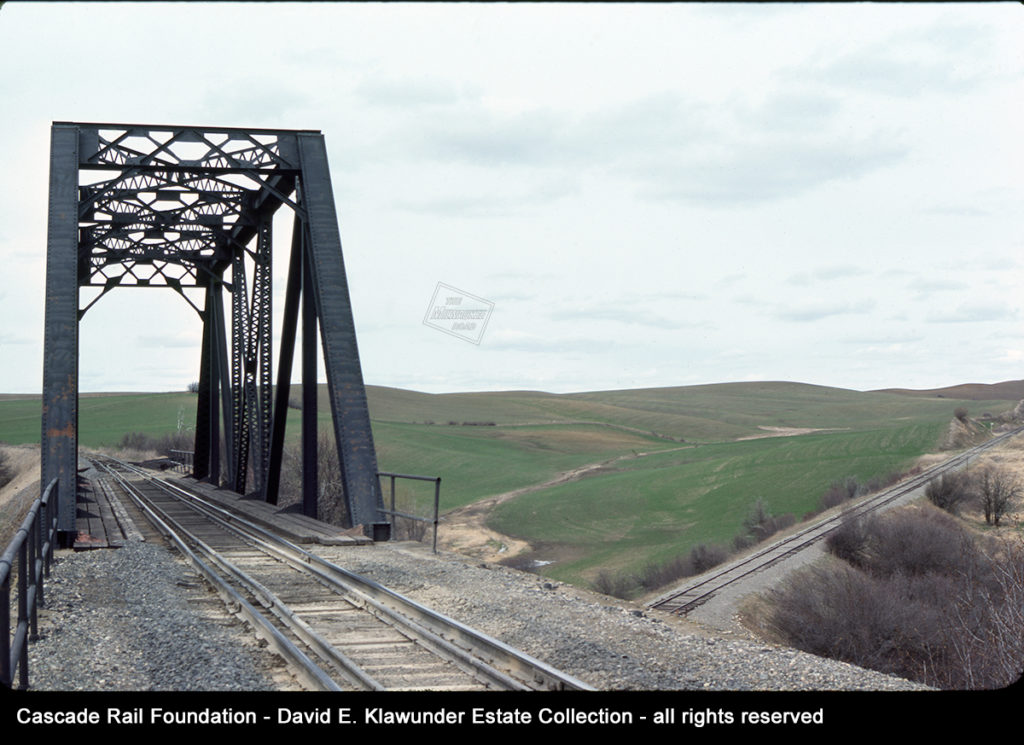 For a different perspective, here is the view looking east from bridge  EE-70A at Seabury on April 11, 1976. Below is the former Spokane & Inland Empire Interurban line to Palouse and Moscow, Idaho. This is one of two Spokane & Inland Empire had into Whitman County from the north, and the Milwaukee crossed above both of them. The other went through Rosalia to Colfax, which the Milwaukee crossed on the Rosalia Concrete Arch Bridge. 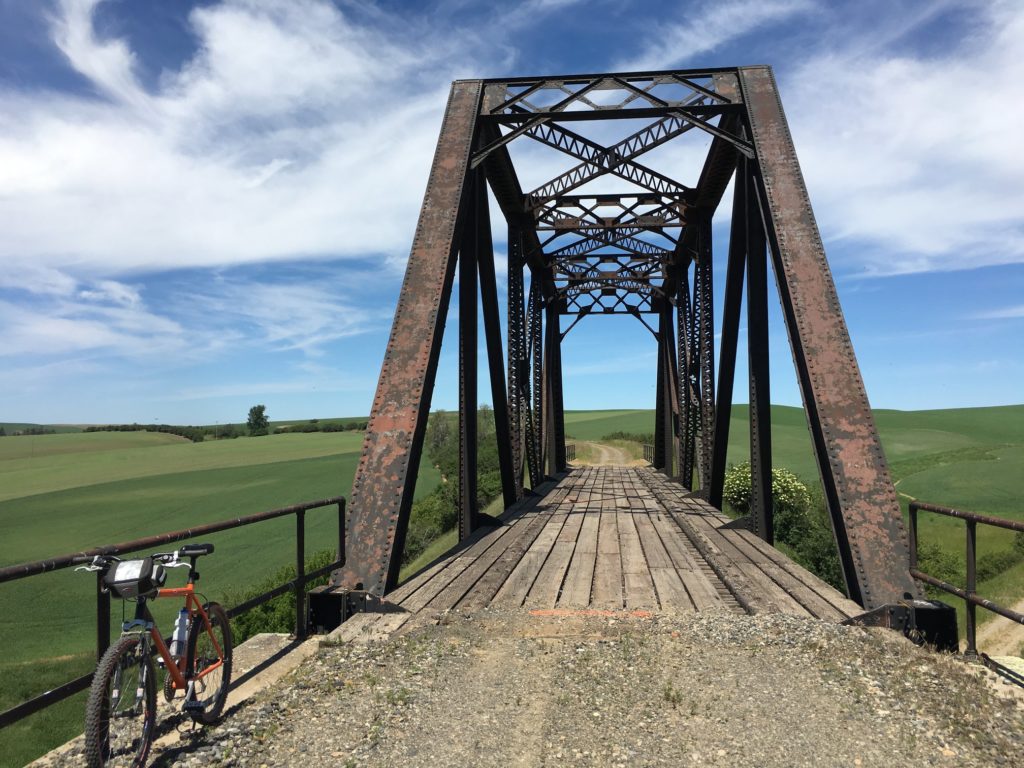 Here is a 2016 view of the bridge at Seabury, looking west on the Palouse to Cascades Trail. That orange & black bicycle has traveled many miles on the Milwaukee Road right of way over two decades.

There is something both inspiring and meditative about these journeys on the trail in the Palouse.

The defining visual landmark of Lone Pine is its grain elevator, seen here viewed from the road in 2016. This is a classic old elevator, wooden with a metal clad siding. The construction contractor proudly painted below the name of the elevator “Atlas Const. Co. Builders, Spokane, Wash.” Unlike several elevators that we have passed that lost their rail connection and are served by truck, this elevator does not appear to be in operation. 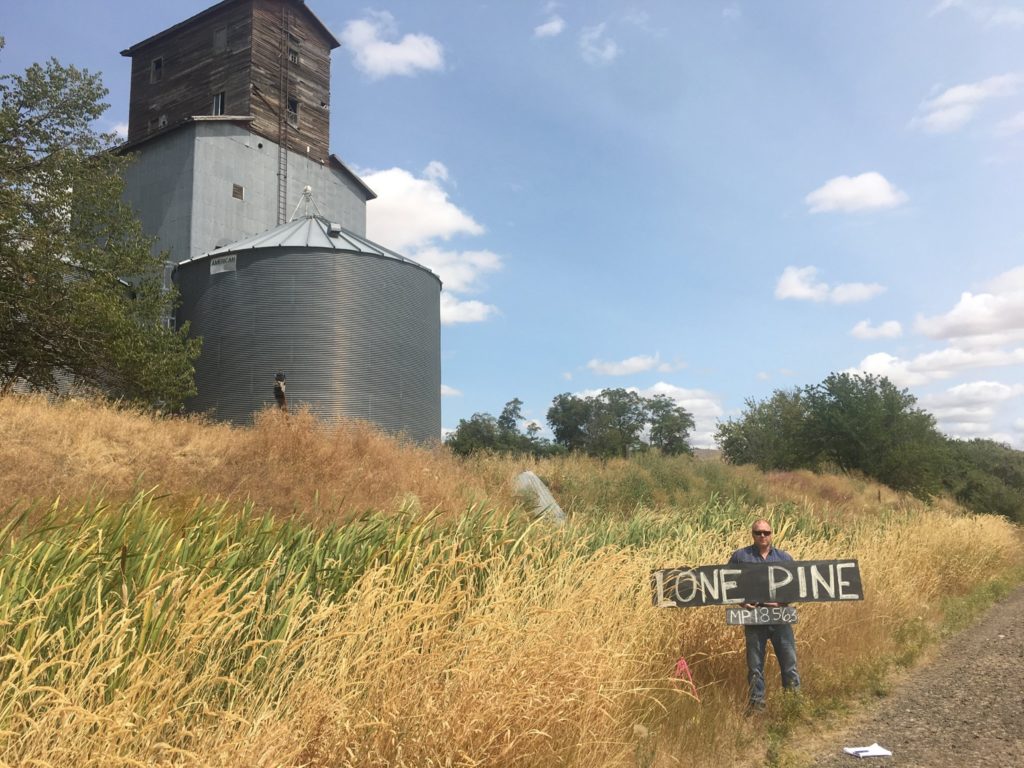 This is the railroad side view of the Lone Pine elevator in 2018, viewed from the former Milwaukee Road right of way. There was a 1002-foot long spur to service this country elevator. Preston Cliburn is holding the sign during an August 2018 station sign project site visit.

Heading east from Lone Pine, Mount Tekoa becomes a prominent feature in the landscape. This freight train is heading towards it on April 11, 1976. This photo was taken from a wooden overhead wooden bridge, designated EE-66 by the Milwaukee Road and described as “overhead highway bridge”.  It is actually a farm road. This was a good vantage point for photographers. 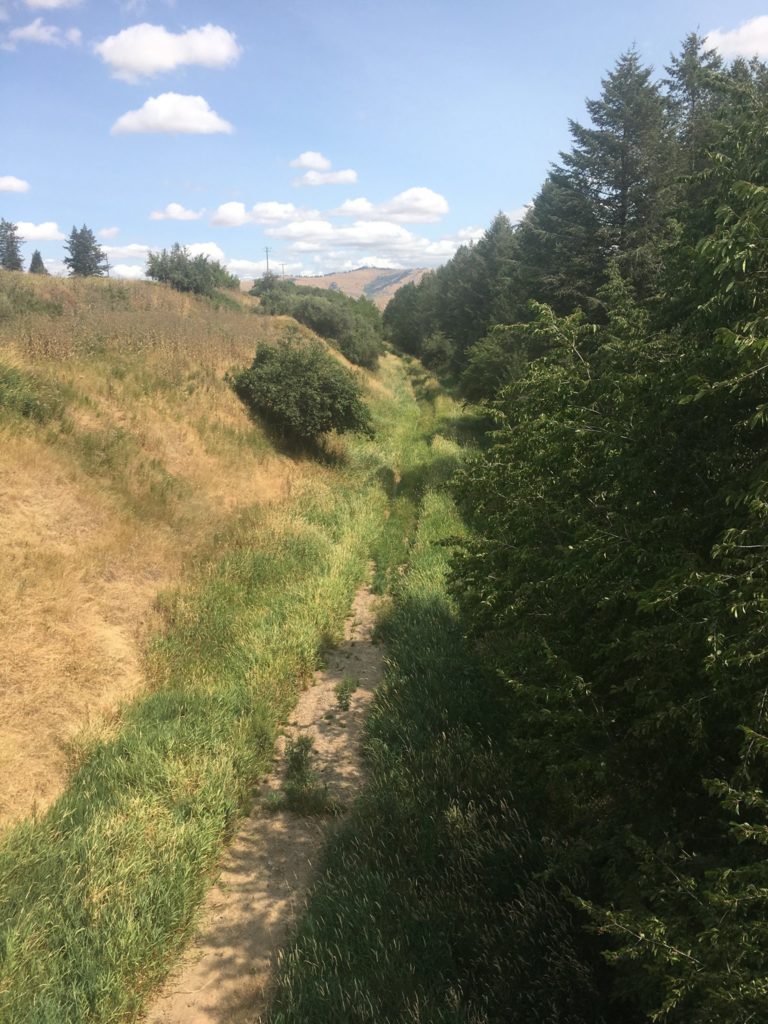 We are at Lone Pine looking east towards Mount Tekoa in August 2018. Bridge EE-66 still carries the farm road over the Milwaukee Road right of way and provides a vantage point for photographers, but no more trains are to be seen here.

This is an area known to trail users as “the swamp”. It had drainage problems from the days of the Milwaukee Road. The line was relocated through here between mileposts 1855 and 1858. The engineering profile has a note near milepost 1858: “130′ hill slide 3-1949”.

This view, looking west at bridge EE-66 in June 2018, shows how high the grasses can grow in “the swamp” of Lone Pine. State Parks has addressed the drainage issue and put down gravel in this section of the trail since this photo was taken.

The construction of the Tekoa Trestle was a major undertaking for the Milwaukee Road. During its construction, a moving crane known as the “Traveler” was used to move large pieces of steel. It could pick up bridge parts off of rail cars placed beneath it, move them out past the end of the partially completed bridge, then lower the parts in place. In this photo, taken around 1908, the Traveler is placing the final pieces of the bridge as it nears completion. Similar to views seen of construction at Rock Lake during our virtual tour, local citizens are taking in the sights from the embankment. Parasols are evident to protect the fair complexion of the ladies from the hot sun. 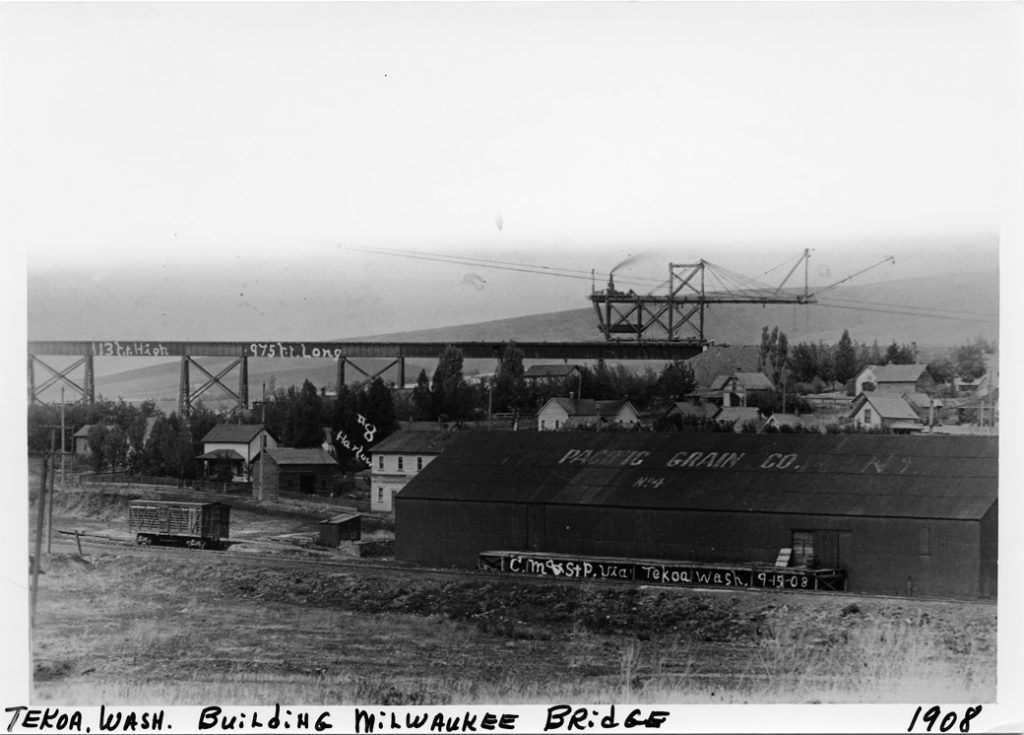 In this view of the Tekoa Trestle on September 15, 1908, the Traveler has completed its work. Below the trestle, the Union Pacific had a rail yard and locomotive servicing facility, including a roundhouse. 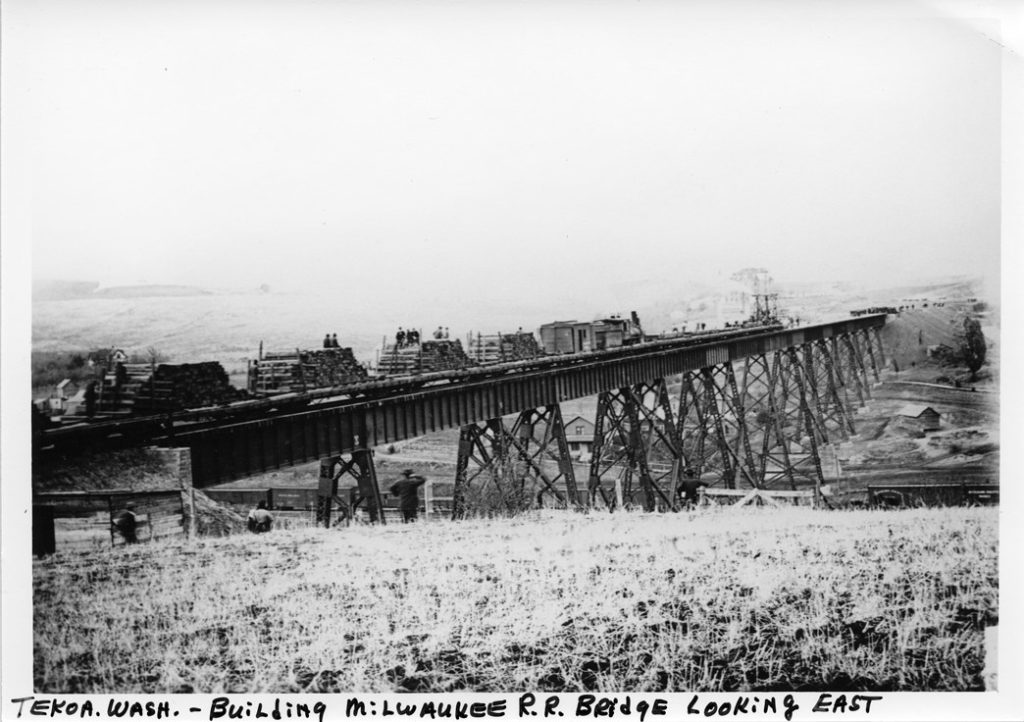 Once the girders were in place, a construction train like this would bring forward track laying materials, including crossties and other hardware for track construction. The materials would be brought forward on a conveyor system seen on the side of the cars, locomotives and crane in the front. This view is looking east in 1908. Rail cars can be seen on the Union Pacific line below the bridge.

Here is a photo of the completed Tekoa Trestle, circa 1940. The railroad designated it as bridge EE-62. It is a 976-foot long, 17-span steel bridge. This perspective from below the bridge provides a good view of the Oregon-Washington Railroad & Navigation Company (a subsidiary of the Union Pacific) facilities. 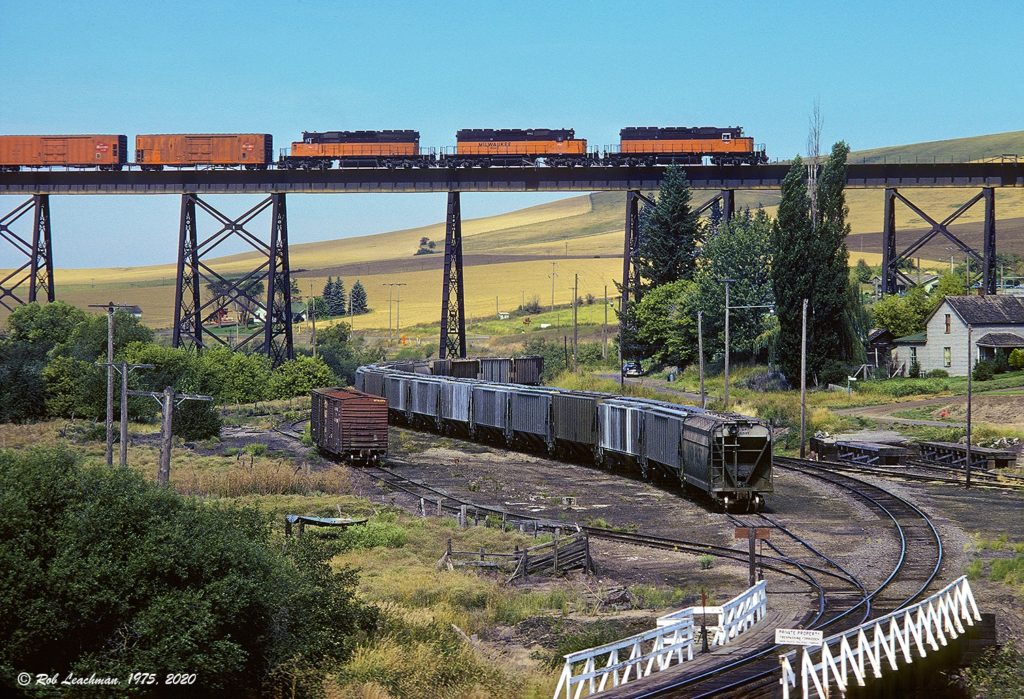 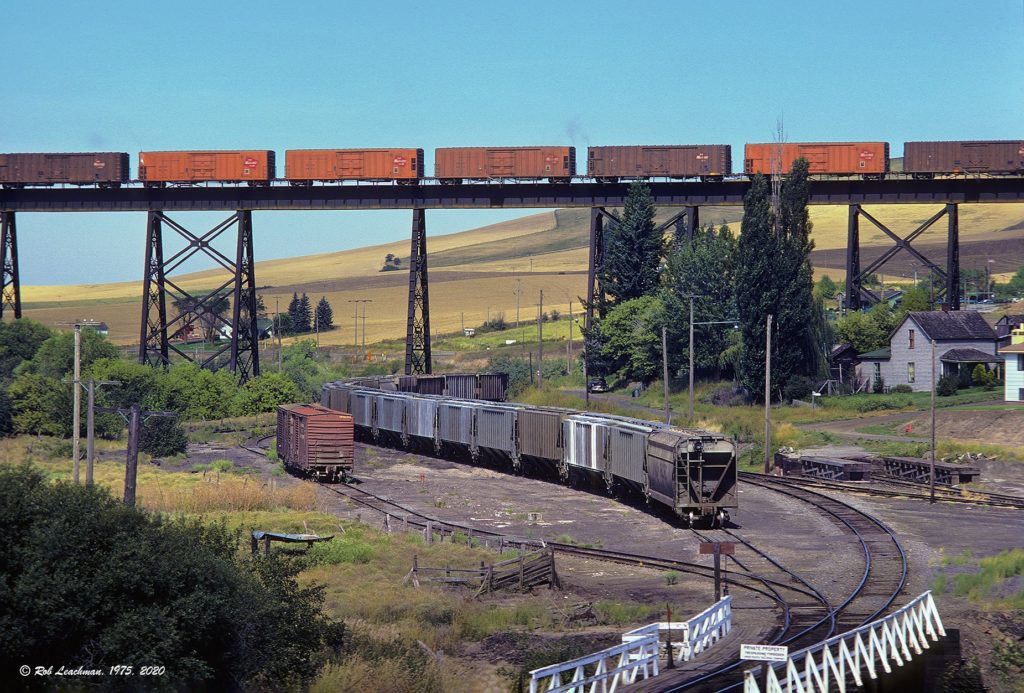 Rob Leachman captured a stunning series of photos showing Milwaukee Road trains on the Tekoa Trestle as well as activity below in the Union Pacific yard. From his lower vantage point near the Union Pacific, Mr. Leachman was able to provide a photo essay of what train time in Tekoa was once like.

Rob tells the story as the action unfolds:

“Here is the whole sequence at Tekoa I got on 27 August 1975 while I was the UP agent at Tekoa. First, Milwaukee 200 steps out on the bridge, a healthy block of mechanical reefers loaded with Moses Lake and Othello potatoes near the front of the train.” 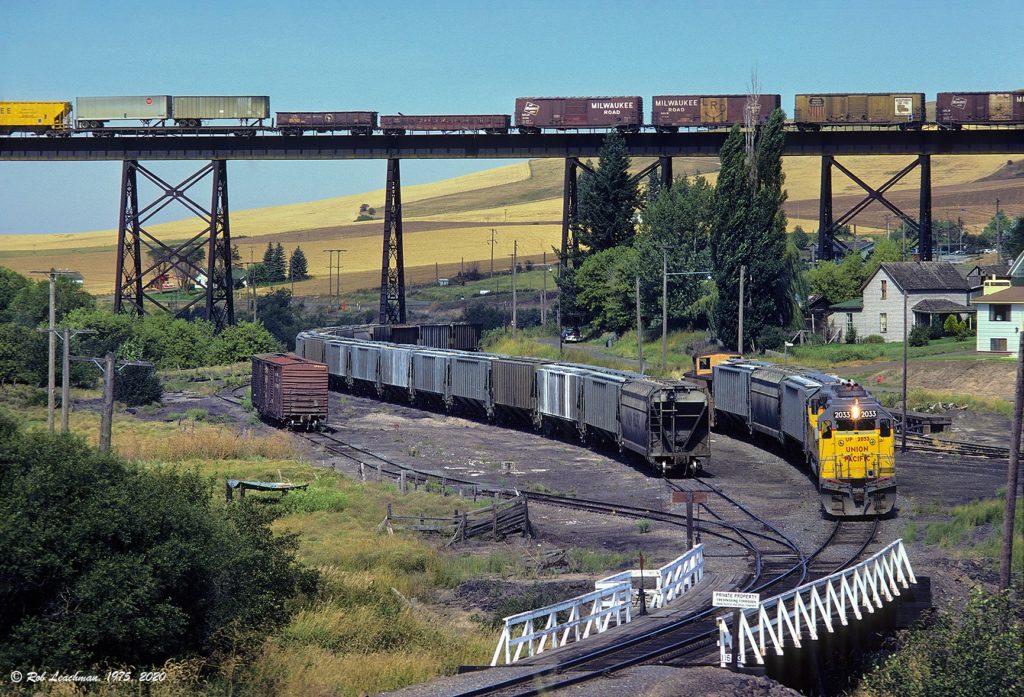 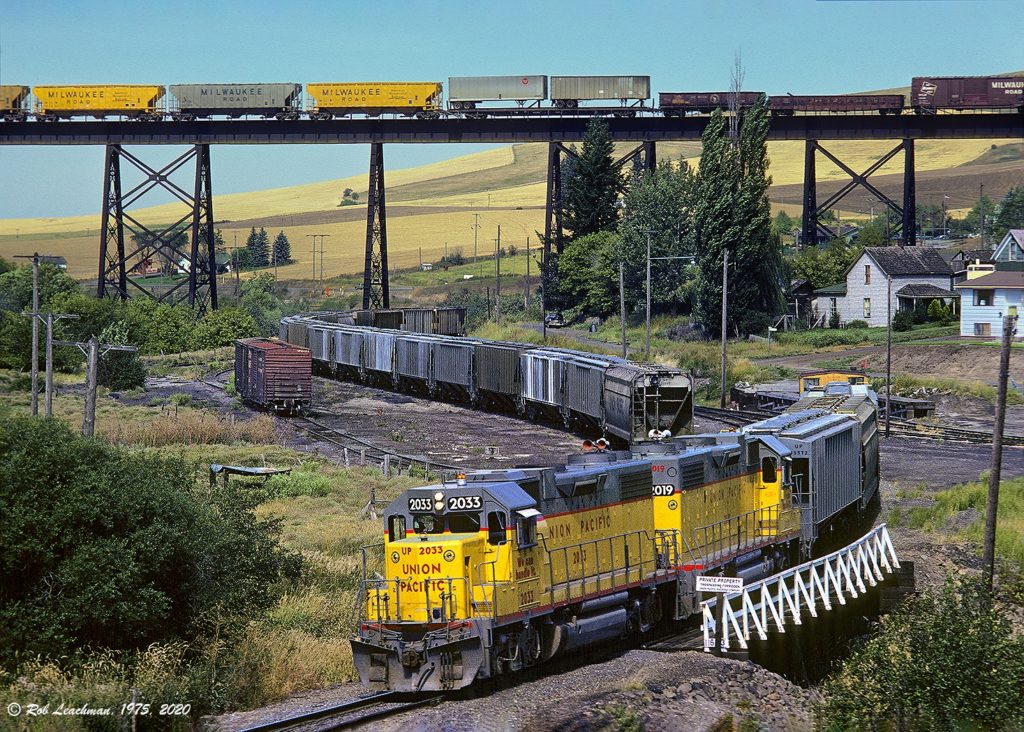 “As 200 continued to roll across the bridge, UP 391 passed underneath. They stopped and spotted the UP grain shuttle block visible in the photo, spreading it among the elevators in Tilma, Tekoa, Warner and St. John. “ 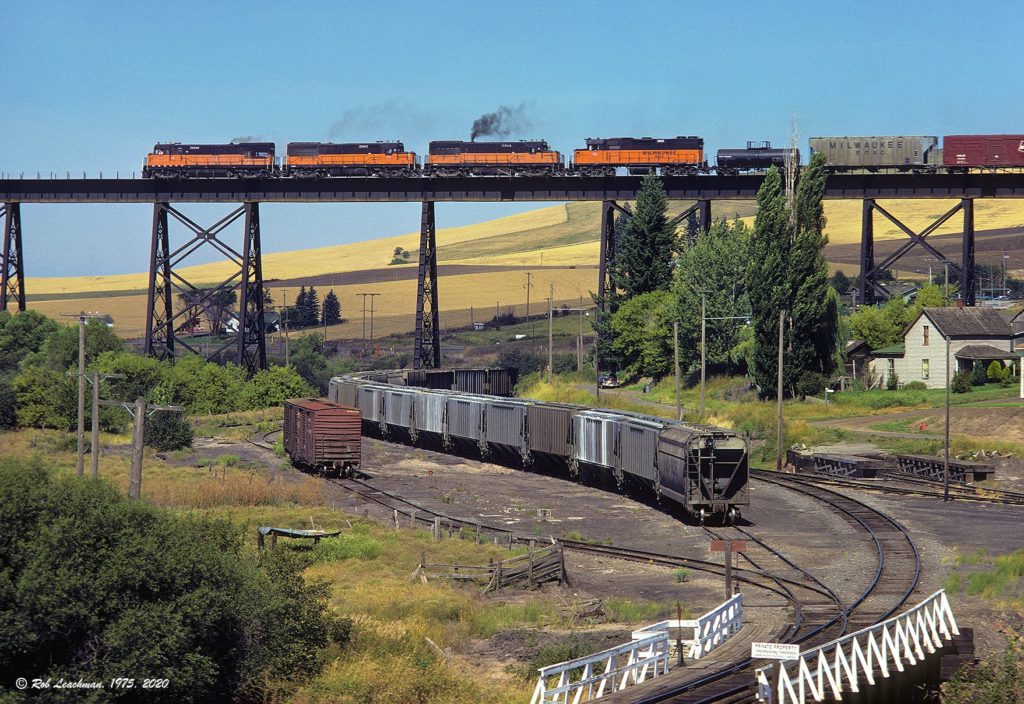 “After 200 cleared, Milwaukee 205 came out of the Milwaukee’s Tekoa siding and crossed the bridge. A St. Maries local unit, on its way to Othello for servicing, was tucked in behind the customary brace of GEs powering the westbound dead freight.”

Tekoa Trestle now stands closed and unused, but it is about to receive decking and side railing in a rehabilitation project by State Parks thanks to advocacy by members ofthe Tekoa community. We can look forward to crossing this bridge as a traveler on the trail, overlooking the Hangman Creek valley and taking in the magnificent vistas of the Palouse. This will be another historic gem on the route of the Palouse to Cascades Trail. 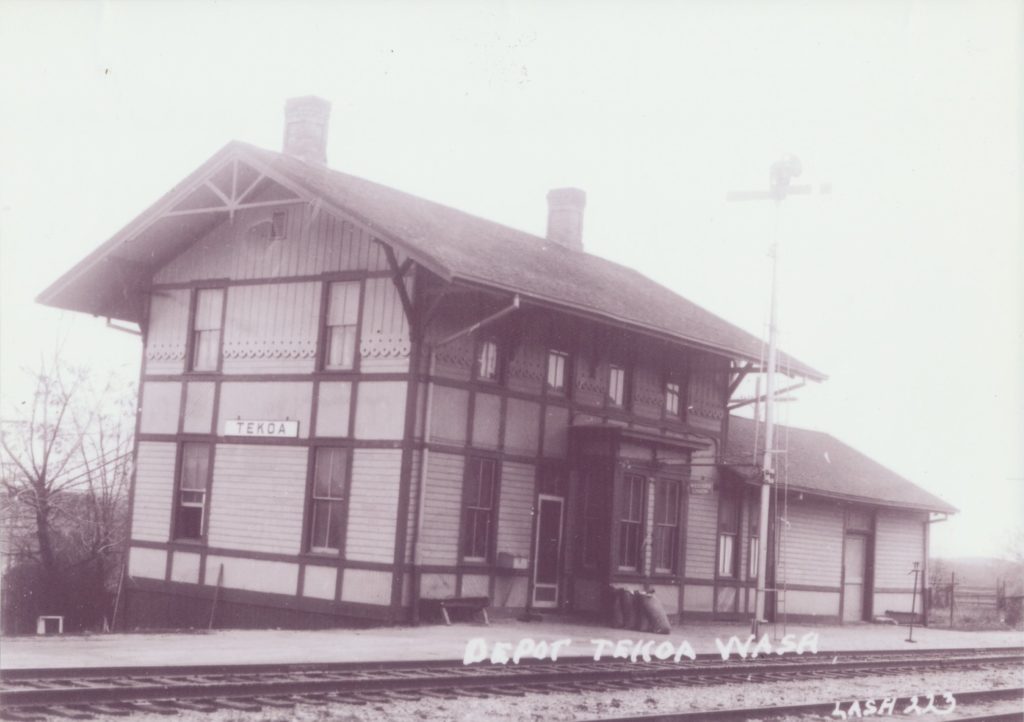 The Tekoa depot was across the trestle at the east side of town.

Allen Miller writes; ” Tekoa depot was another Class “B” depot virtually identical to Lind. It was opened July 3, 1909 and the agent for the first years was Hiram R. Parker, who was nicknamed “Dad” because he was, I think, the eldest, age-wise, agent on the Columbia Division. He was the first on the extension to join the Order of Railroad Telegraphers (ORT) and held the oldest card on the “Puget Sound”. Tekoa was closed by 1960 and the building demolished by the mid to late 1960’s.”

This is the site of the Tekoa depot, looking west. The east end of the Tekoa Trestle would be just out of sight down the right of way in this view.

Tomorrow our virtual railroad journey takes us across the state line and into Idaho. We’ll stop and tie up at Plummer Junction.