Today our virtual tour takes us to Revere as we continue into the channeled scablands. This is one of the most remote sections of our journey. Our destination of Revere will be marked by a grain elevator that stands as a sentinel over the countryside. Grain has been and remains a key to the agricultural economy of this area of dryland farming. For the rest of our journey in Washington state we will be in Whitman County, with a brief visit to Spokane County.

Carlmar was a five-car spur established in the early 1940s and removed by June 1967. Dan Bolyard photo from the June 2018 station sign site visit. 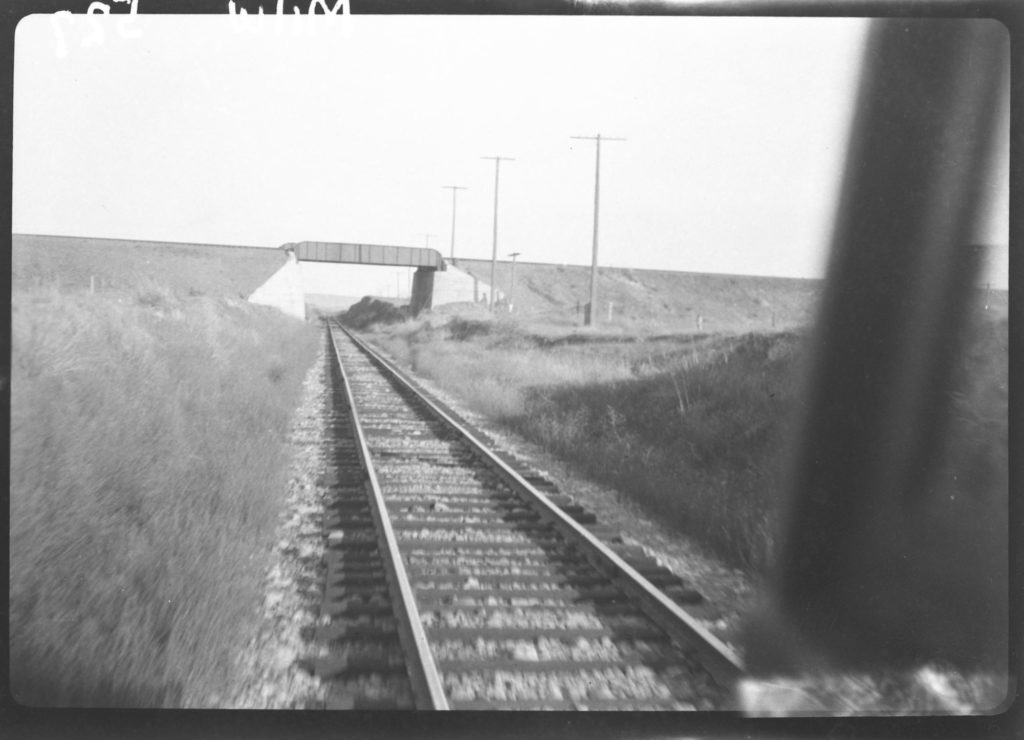 In this photo taken by John W. Barriger III in September 1936, we look east and see the Spokane, Portland & Seattle (SP&S) overcrossing of the Milwaukee Road. This 50-foot steel girder bridge was made by American Bridge Company, of New York and installed in 1913. The SP&S was one of the Hill Lines, affiliated with Northern Pacific and Great Northern. Its route ran from Spokane (to the left) through Pasco to Portland (to the right). The route became part of Burlington Northern in 1970 and subsequently abandoned. Although there never was a rail connection or interchange between the Milwaukee and the SP&S at this location, the SP&S had a station here called Waukee (as in “Milwaukee”) which was renamed McCall in 1916. Photo from the John W. Barriger III National Railroad Library. 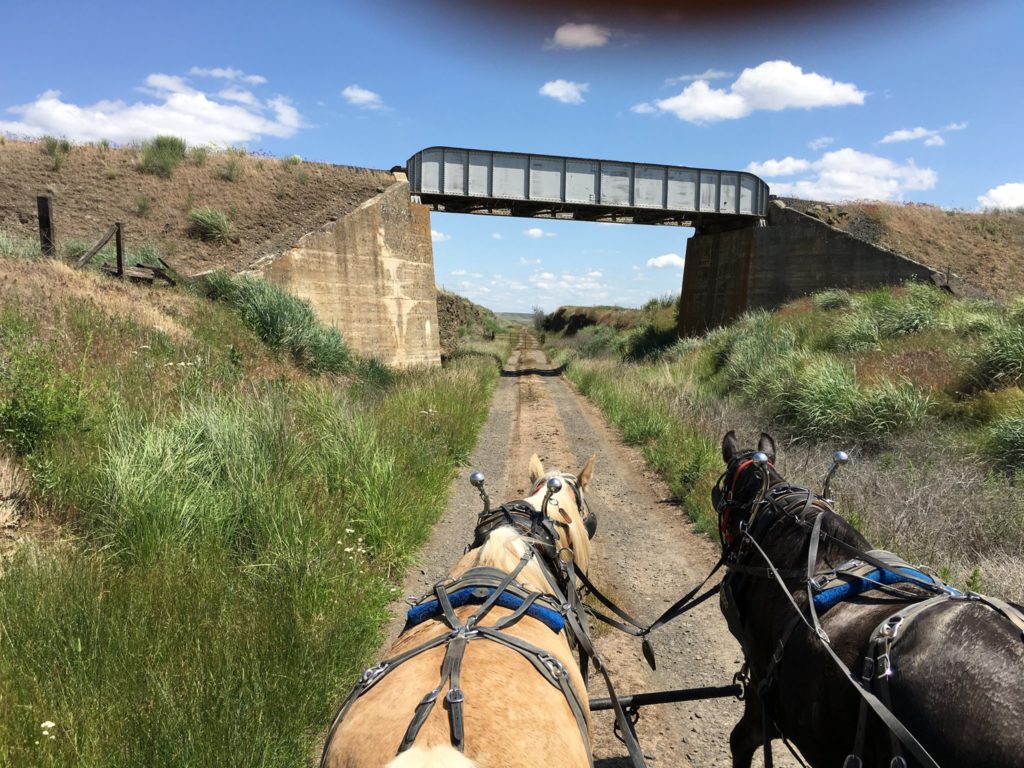 What was once the crossing of two railroads is now a crossing of two trails. This view during the 2016 John Wayne Pioneer Wagons & Riders cross-state ride captures the crossing of the Columbia Plateau Trail across the former Milwaukee Road right of way. The Columbia Plateau Trail is the former Spokane Portland & Seattle Railway mainline between Ice Harbor Dam near Pasco and Fish Lake near Spokane. At the present time (2020), the trails do not connect at this location. Photo by Mark Borleske. 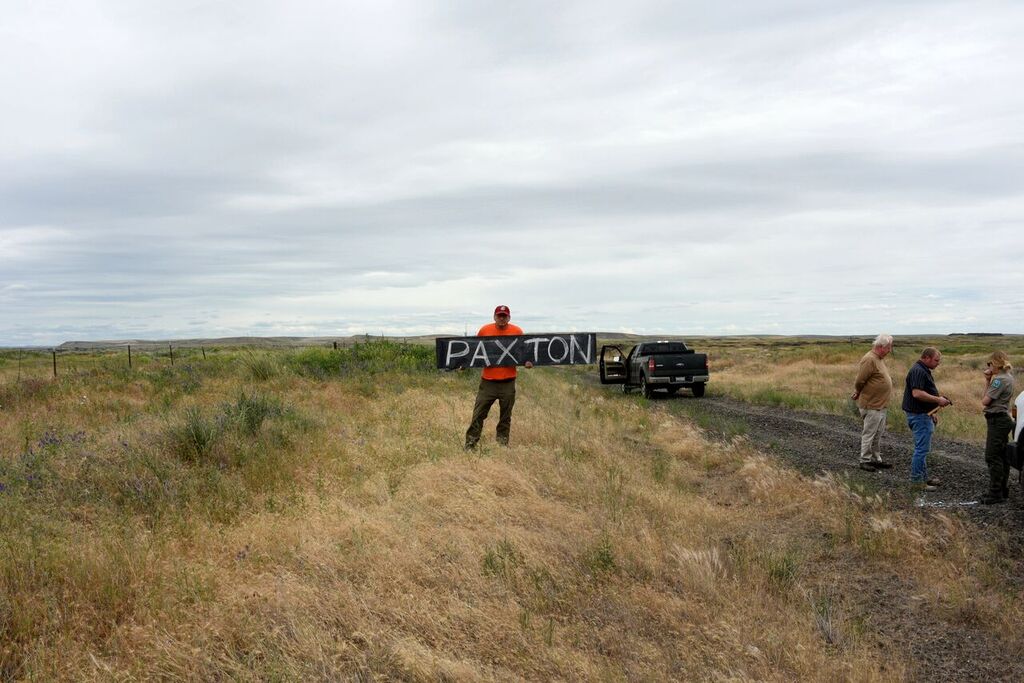 Paxton was the location of a passing track and small stockyards. This photo was taken during our station sign site visit in June 2018. Left to right; volunteers Mark Borleske, Dan Brady and Preston Cliburn and State Parks Ranger Jessica Springer Villardi. Photo by Dan Bolyard. 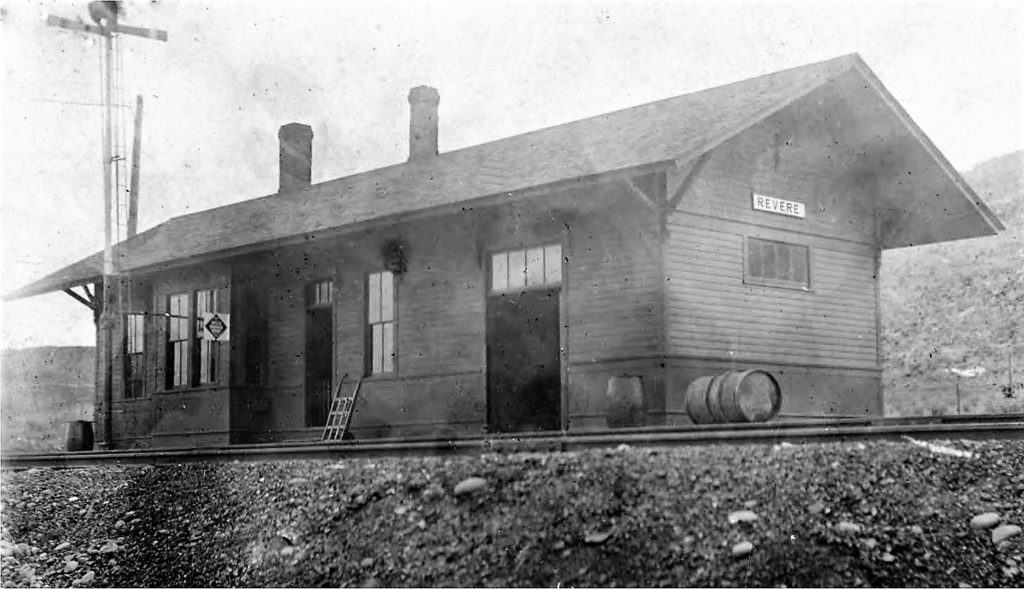 Here we see the Revere depot. The agent at Revere for its entire existence was Horace R. “Homer” Stephens, who opened the station on May 23, 1910. His wife Eithel, started work as night operator on June 15, 1910. When the 8-hour day was established, their son Homer B. Stephens started working the third shift on September 20, 1912. Mrs. Stephens had a hobby of collecting rattlesnakes, which she sold as pets. She made enough money to buy a piano to grace the living quarters within the depot. The section foreman’s daughter, Lagula H. Tilger, also worked here as night operator in 1913, but she married and resigned in 1915. When Revere was closed in 1922, agent Homer Stephens bumped into the agency at Dalkena, on the Pend O’reille Line. Photo from Whitman County Library, Whitman County Heritage. Caption information from Allen Miller. 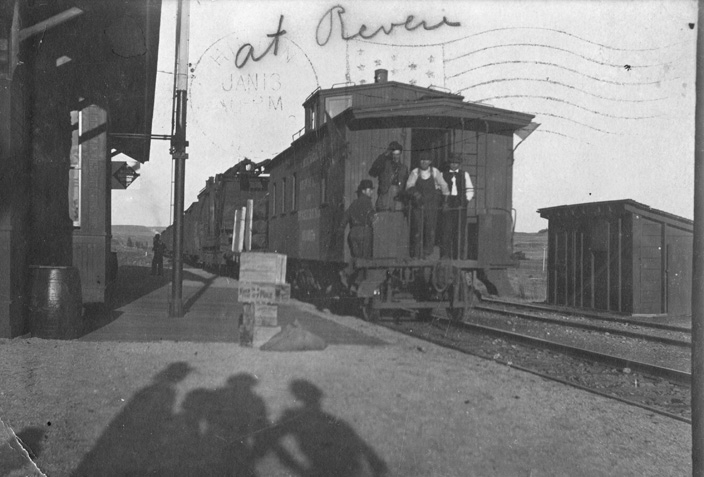 This way freight is departing Revere, heading eastbound, after dropping off some articles on the depot platform. The photo was taken prior to April 1912 because the caboose is displaying two green flags as rear markers. After 1912, marker lamps (unlighted) were designated as rear end markers for daytime use. Photo from Whitman County Library, Whitman County Heritage. Caption information from Allen Miller. 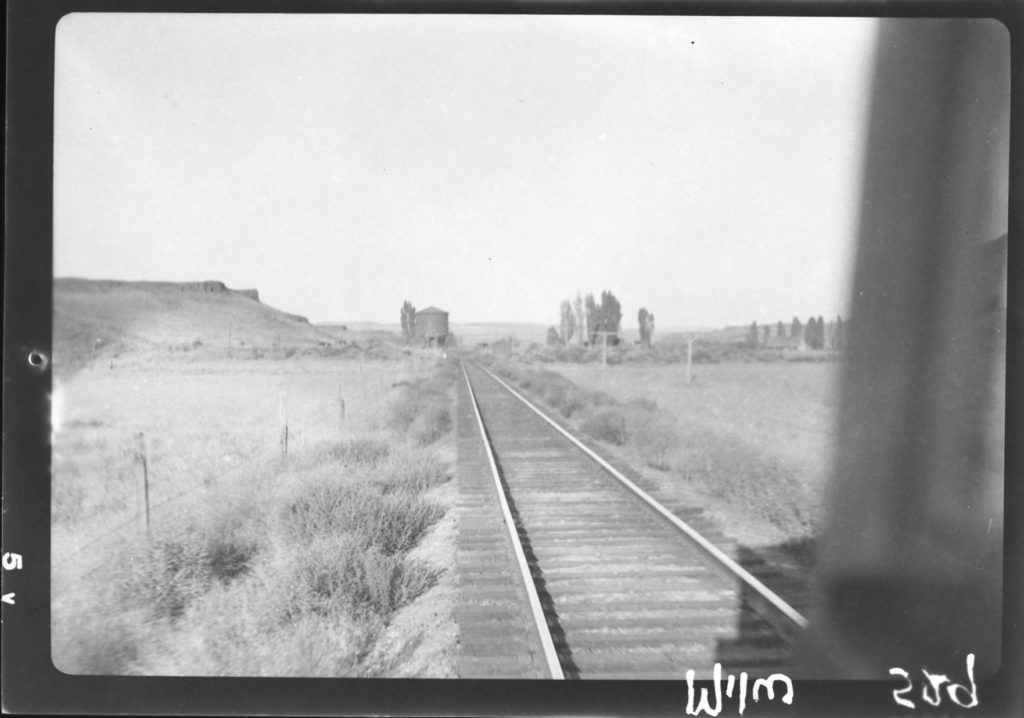 John W. Barriger III captured this view of Revere, seen approaching eastbound, in September 1936. The depot was closed in 1922, but may still stand at this date. It would have been beyond the water tank seen to the left of the tracks. Often these depots with living quarters were used as section foreman dwellings after being closed as an agency. Photo from the John W. Barriger III National Railroad Library. Caption information from Allen Miller.

Here we’re standing in Revere at the site of the former depot, looking east. The grain elevator was designed and built by General Construction Company of Spokane in 1948. Dan Bolyard photograph, June 2018. 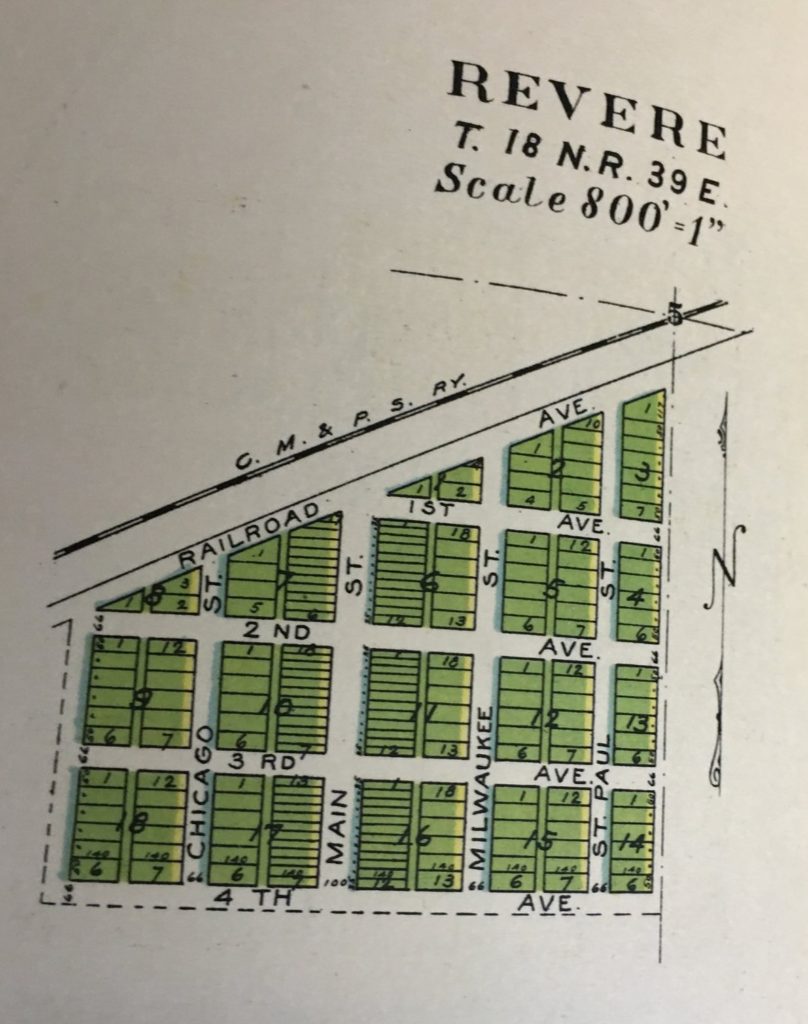 In this plot map of Revere, we see Railroad Avenue running parallel to the tracks, with cross streets Chicago, Main, Milwaukee, and St Paul. No question who laid out this town. The Milwaukee Land Company was organized to sell lots on behalf of the railroad. Plot maps like this were drawn up for numerous remote locations along the route of the new railroad. These maps were often extremely optimistic – the community never materialized as envisioned here. Map from the Tekoa Library & Museum collection. 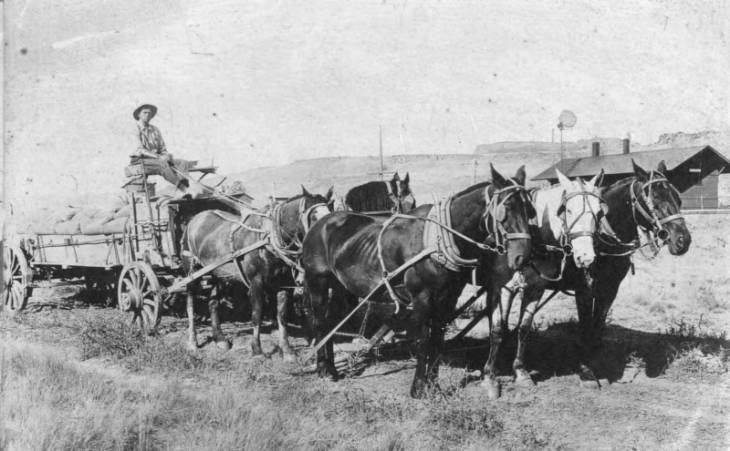 This team of horses is hauling grain to Revere, part of the journey from the farm, to the sack house, and then to the railroad. The depot can be seen in the background of this photo, taken circa 1910. Photo from Whitman County Library, Whitman County Heritage. 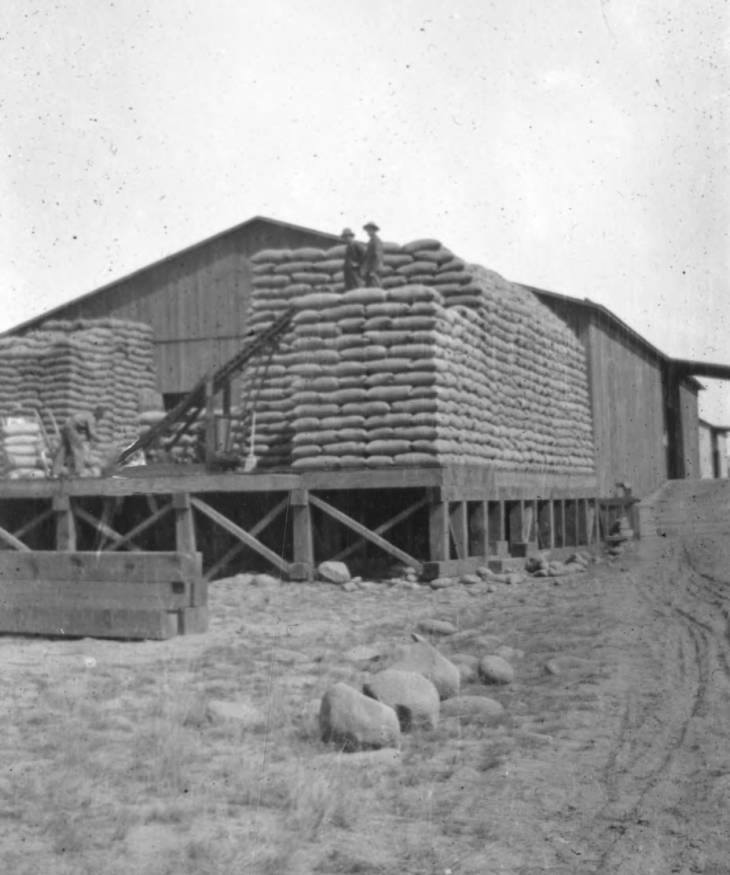 This is the Revere Grainery, circa 1920. Sacked wheat is stored and ready to be loaded into boxcars for shipment on the rail. Handling sacked wheat would disappear as bulk shipment of wheat from elevators became common in the future. Photo from Whitman County Library, Whitman County Heritage. 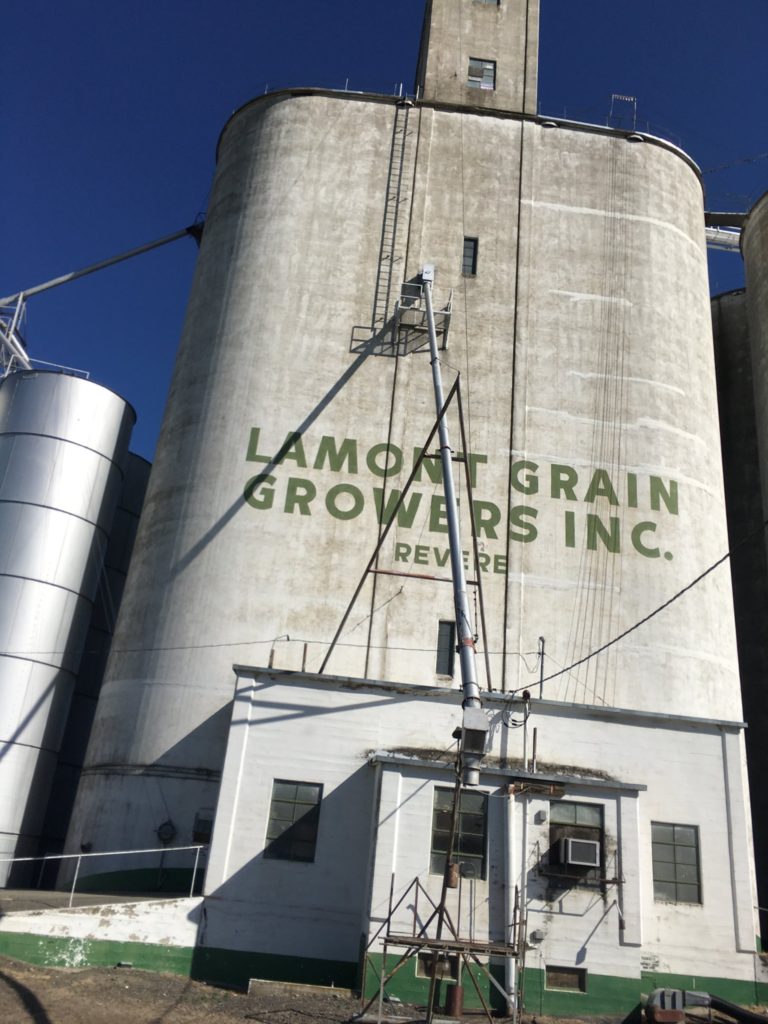 The railroad is gone, but the grain elevator at Revere still towers above the countryside. This elevator was designed and built by the General Construction Co. of Spokane in 1948. Mark Borleske photo, 2016.

A parting glance at the Revere elevator as the John Wayne Pioneer Wagons & Riders 2016 cross-state ride moves onward. The railroad ran to the right of the elevator in this view, with a siding serving the elevator, a passing track, and the main line. Mark Borleske photo.

NEXT STATION…
Tomorrow we continue our trek east past an impressive rock formation and a small waterfall on the way to Ewan.