On our tour of the Milwaukee Road, we have the benefit of virtually crossing over the Columbia River Bridge to Beverly. Hopefully we can do that in reality soon, as the bridge will again serve as a transportation artery once it is reopened for trail use. After crossing the river, the Milwaukee entered the Crab Creek drainage, nestled below the Saddle Mountains on our way to Smyrna and Taunton substation. Rails are still in place between Royal City Junction, Othello, and Warden.

Here is the Beverly Bridge under construction just before Chritsmas in December 1908. The steamer St Paul would haul men, material, and fuel to the Beverly Bridge site from Vulcan, WA . Vulcan was a station on the Great Northern railroad near Wenatchee. The steel for the bridge was brought in from Pennsylvania. Photo courtesy of the Othello Community Museum. 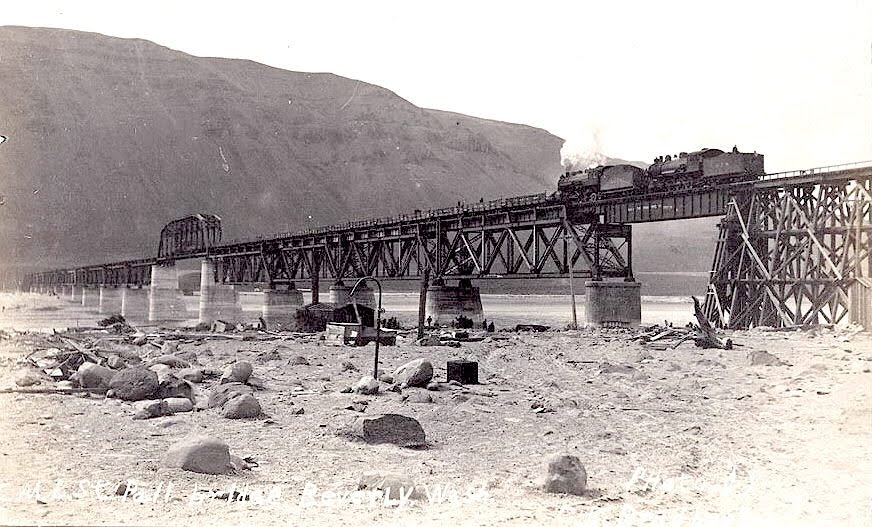 Two steam locomotives with a train on Beverly Bridge seen from the Beverly (east) side of the river. The wood pile trestle approach structure dates this photo prior to 1915, when it was replaced by a concrete and steel structure. (photo source unknown) 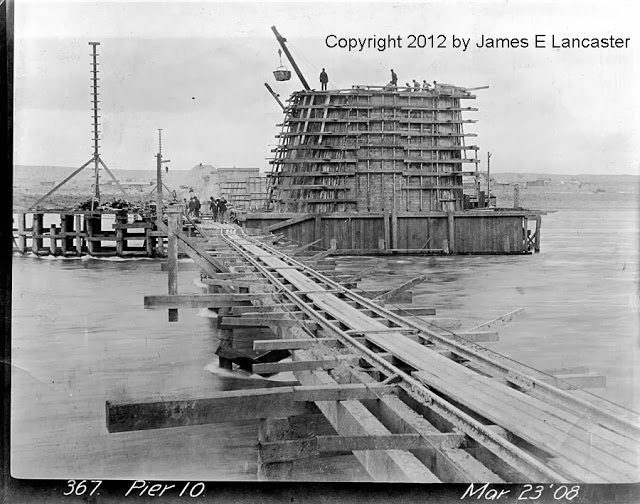 This view of the bridge was photographed close to river level in mid-span on March 23, 1908.  Here we see the coffer dams used to set the masonry piers on bedrock below the river floor. Photo copyright, James E. Lancaster.

Looking north, in order of appearance, the Milwaukee Road’s Beverly Bridge, Wanapum Dam, and the Vantage Bridge (I-90). The community of Beverly is on the right. Photo taken from Sentinel Gap, near Mattawa, WA, by Dan Bolyard.

Electric boxcab motors in a 4-unit set lead eastbound train 264 on the bridge. The Beverly box motor helper is entrained towards the far end of the bridge. This is a rare late-1950s color photograph. Starting in 1960, there would be GP9s (diesel locomotives) behind the boxcab motors on this train. Photo from Cascade Rail Foundation Walt Ainsworth collection with caption information from Rob Leachman. 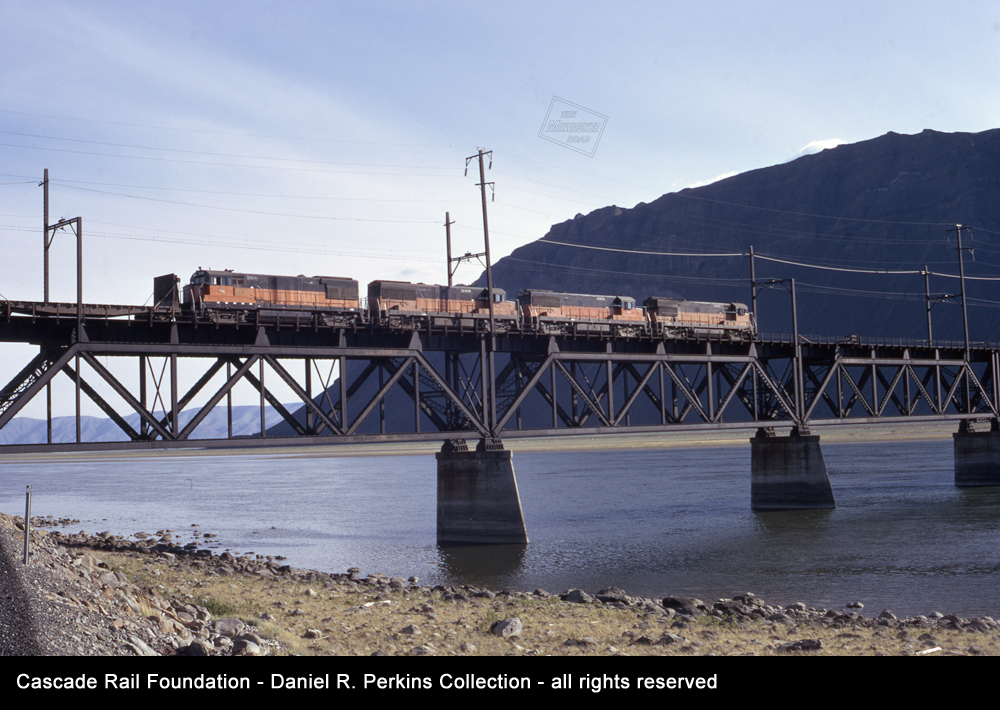 Milwaukee Road General Electric diesel locomotives 5507, 5008, 5009, and 5508 power a westbound freight across the river to take on the ascent up the Saddle Mountains on Boylston Hill. Photo taken at Beverly, WA on April 28, 1973 by Daniel Perkins. (Source: Cascade Rail Foundation, Daniel Perkins collection) 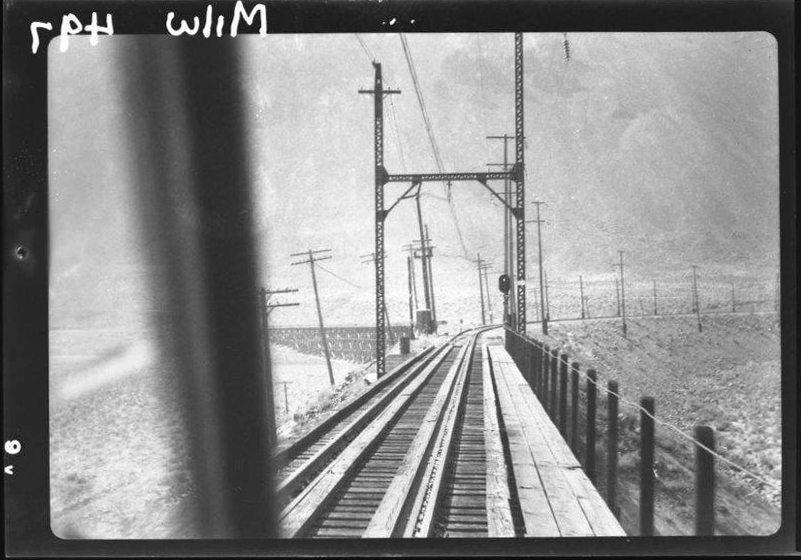 John Barriger III took this photo looking west towards Beverly Junction on his 1936 inspection trip. The Hanford Branch split off from the steel bridge on the wooden trestle to the left, The main line curved to the right (north) to begin the ascent up Boylston Hill. Photo from the John W. Barriger III National Railroad Library. 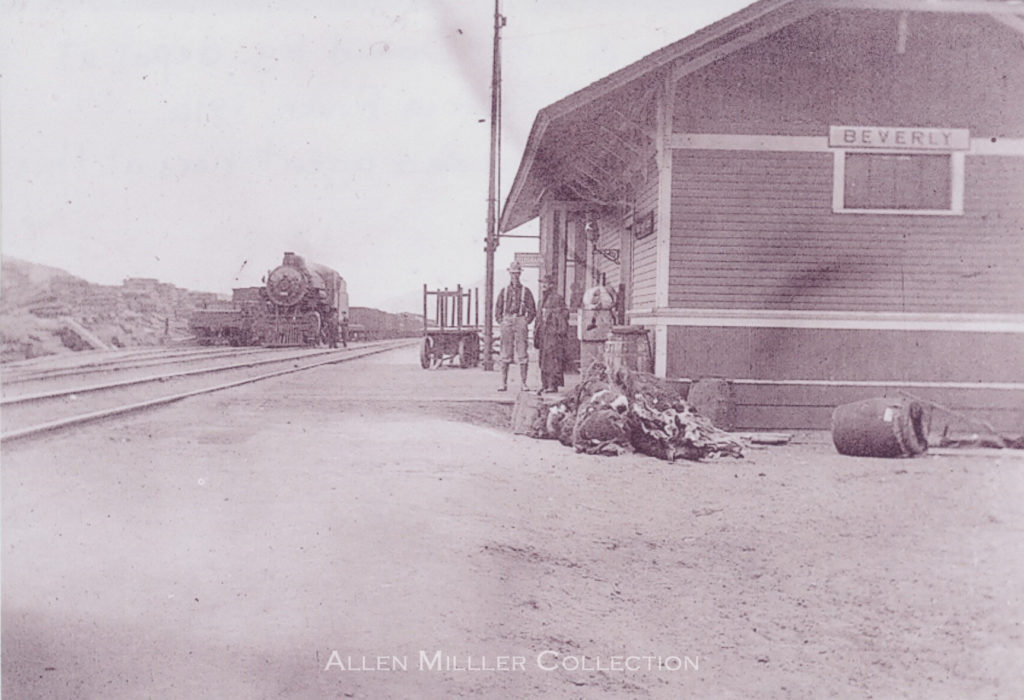 Here is a view looking eastward at the Beverly depot in 1910. Behind the locomotive was the “Sand Spur” where locomotive sand was shipped to points all over the Milwaukee system for a time. Photo and caption information from Allen Miller.

This is another view looking east at the Beverly, WA depot and yard, taken in April 1976. This shows the depot as it looked after a windstorm that hit the depot with an estimated 100 mph gust. The wind tore off the roof overhang on the west end of the building and damaged the train order semaphore. The repair crew just cut the rest of the overhang off so that the wind couldn’t get under it again. Photo probably taken by Stan Styles, in the Cascade Rail Foundation Gary Oliver collection. Caption information from Allen Miller.

This August 1969 view captures the essence of Beverly. Looking west, we see the depot and the Beverly helper, an electric boxcab motor set used to assist trains going up the Saddle Mountains seen in the background on the other side of the Columbia River. The depot annex in the foreground was added to accommodate the busy agency work brought on by the secret World War II atomic bomb project that was underway on the Hanford Branch. Photo probably taken by Stan Styles, in the Cascade Rail Foundation Gary Oliver collection.

Westbound train 201C is seen approaching Beverly from Smyrna May 19, 1979. The Milwaukee ran through the Crab Creek Valley, nestled along the Saddle Mountains, between Othello and Beverly. Blair Kooistra photograph. 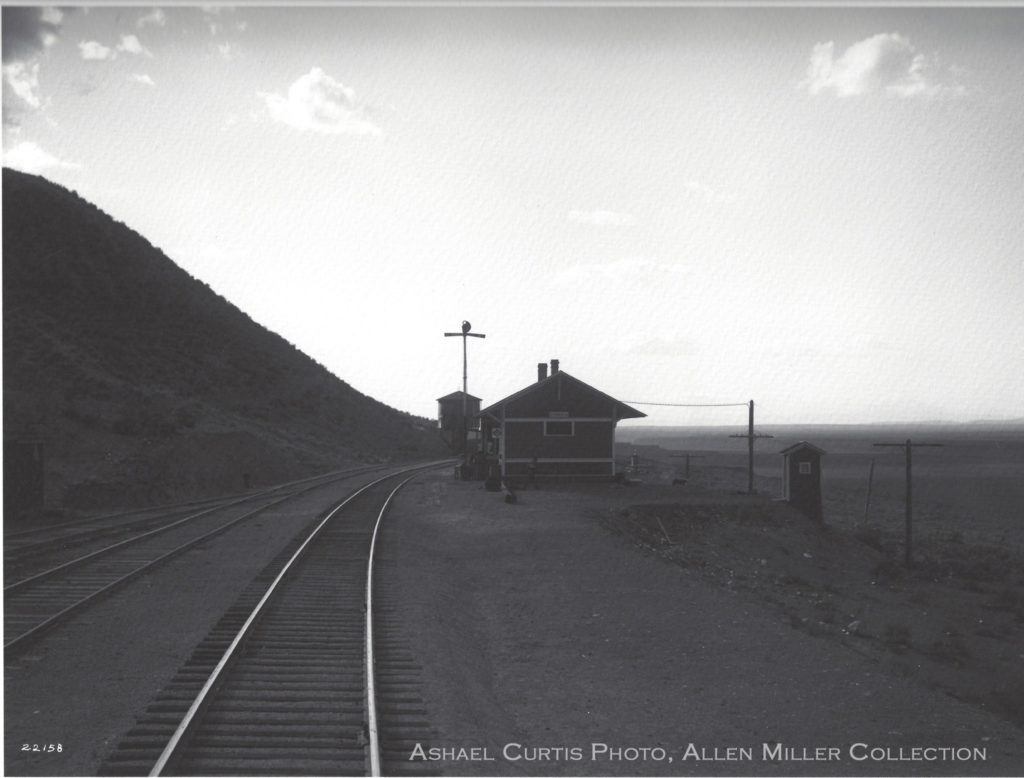 In this photo we are looking west at the Corfu depot in 1910. Ashael Curtis photo courtesy of Allen Miller. 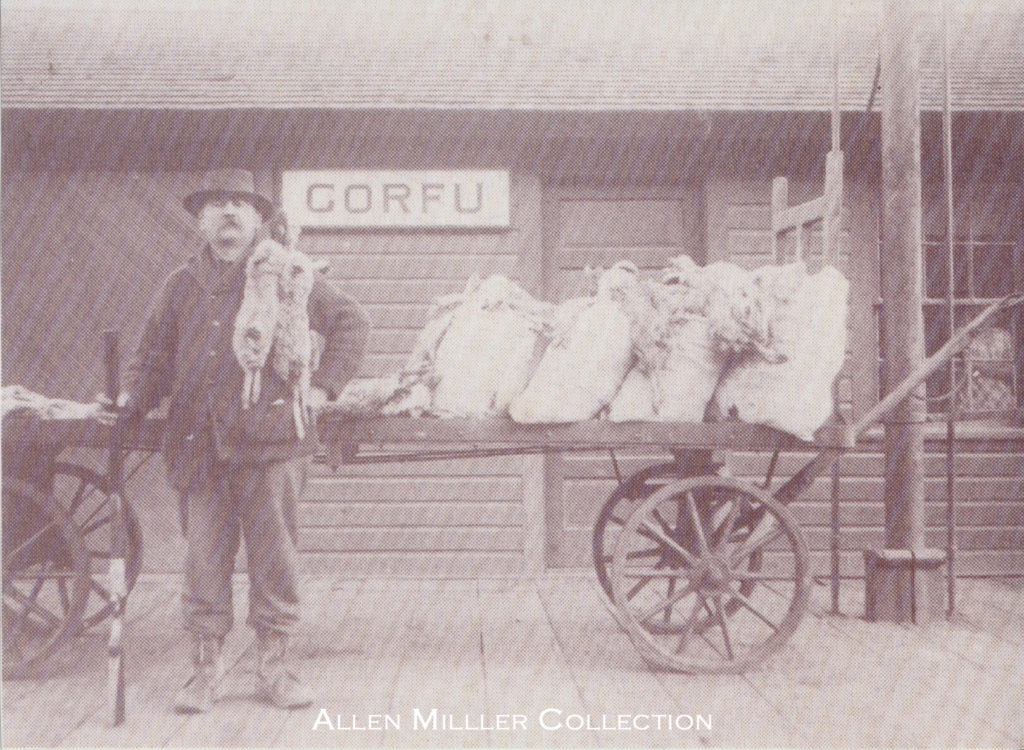 Rabbit drives were a popular yearly event at places along the Milwaukee like Corfu, Warden, and Ewan. In an effort to rid the prairies of bothersome jackrabbits, groups of hunters were transported by train to these events. They would form a large half-circle and drive their quarry ahead of them until they were impeded by a natural obstruction like a cliff or wall, then the hunters would blast away – “just like shootin’ fish in a barrel”. Here we see Fred Muster, of Cle Elum, with his “bunny bags” ready to be checked onto the return train in the Corfu Rabbit Drive of January, 1921. Photo and caption information from Allen Miller. 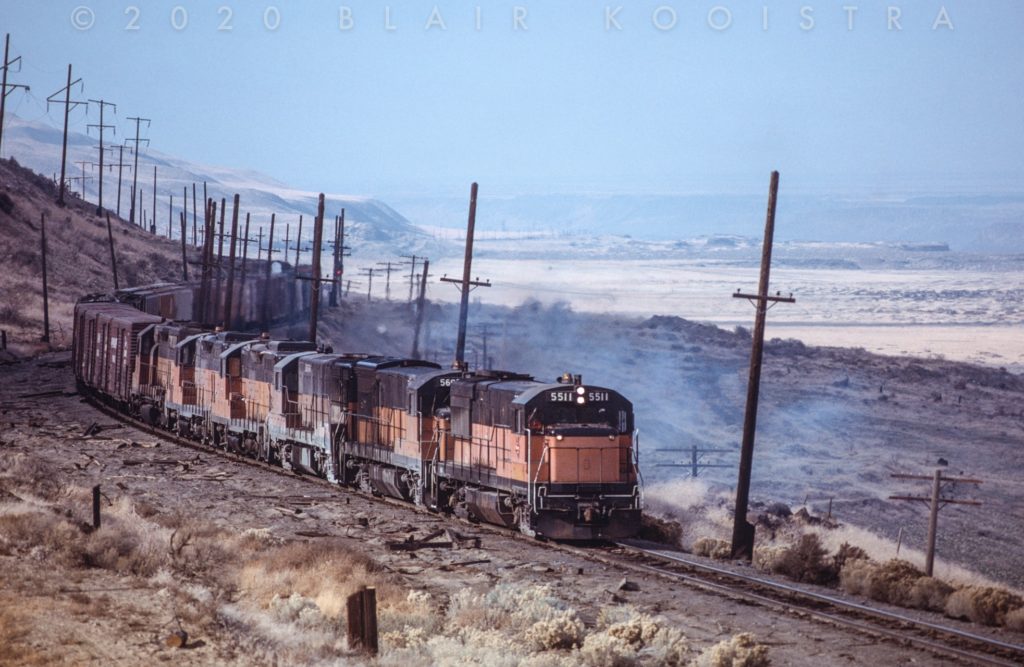 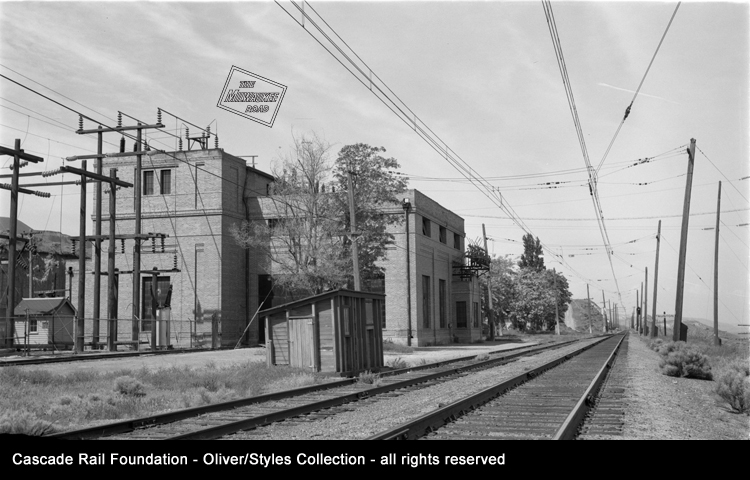 The substation at Taunton, located 9 miles from Othello, the east end of the Coast Division electrification. This May 1969 view, looking west, captures the classic brick building nestled against the foothills of the Saddle Mountains. The building still stands, although forlorn and deteriorated. Photo from the Cascade Rail Foundation Gary Oliver Collection, probably taken by Stan Styles. 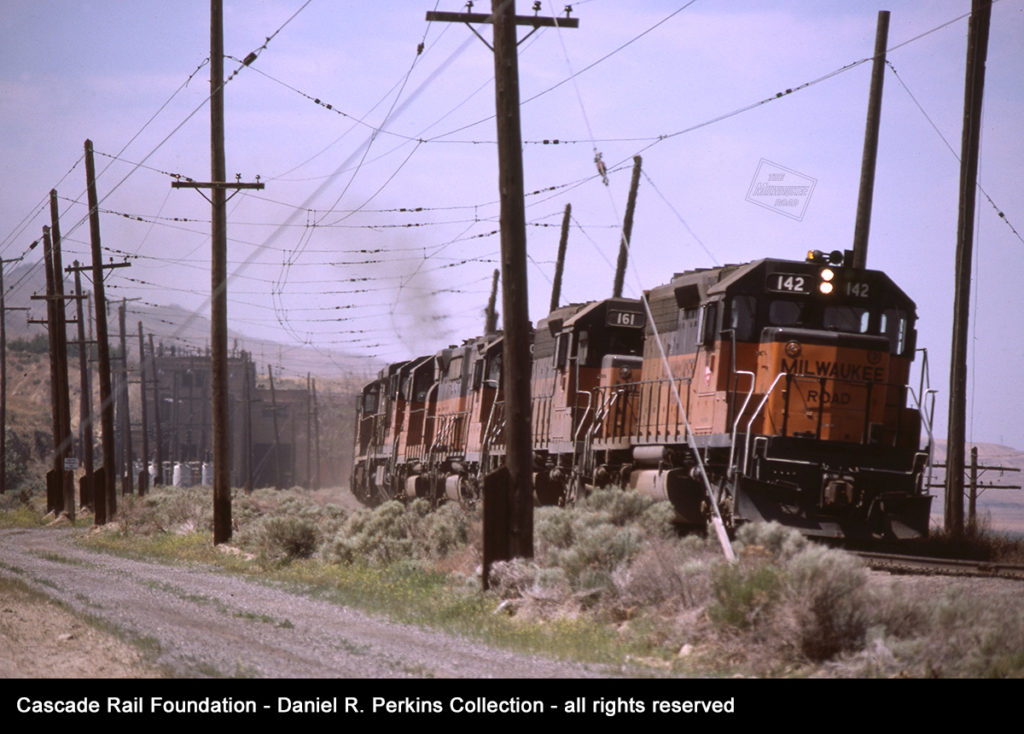 Tomorrow we visit Othello, an important Milwaukee Road location, with a yard, roundhouse and crew change point. Othello is the east end of Coast Division electrification. Beyond Othello we continue on the unelectrified section, known as the “the Gap” to Warden.