May 25 (Memorial Day) – this is a memorable day on our virtual tour of the Milwaukee Road Coast Division. We are traveling from Ellensburg through the Kittitas valley, the town of Kittitas, and climbing up the hill towards Boylston. Lush irrigated fields are replaced by volcanic rock and sagebrush, the hues of the landscape change from green to beige and brown. We cross the Johnson Creek valley over the magnificent Renslow steel bridge. We will end our day’s journey at the south end of the bridge. 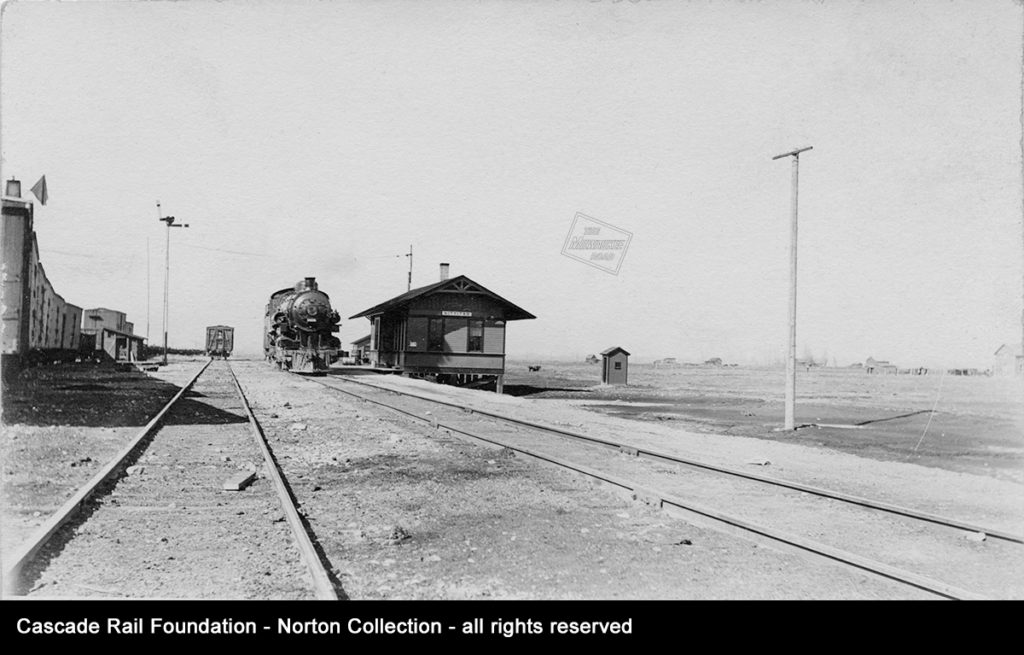 Kittitas in the summer of 1909 when the depot first opened, they haven’t finished putting in fill around the backside. The train in the yard on the left has one of the CM&PS’s boxcar cabooses and the green flag is one of two rear end markers for daytime use. These cabooses didn’t have a cupola but, instead, had a narrow bench on
the roof for observation purposes. A pair of green flags served as daytime rear end markers prior to 1912, when unlit marker lamps replaced them. One of the flags can be seen in the photo. 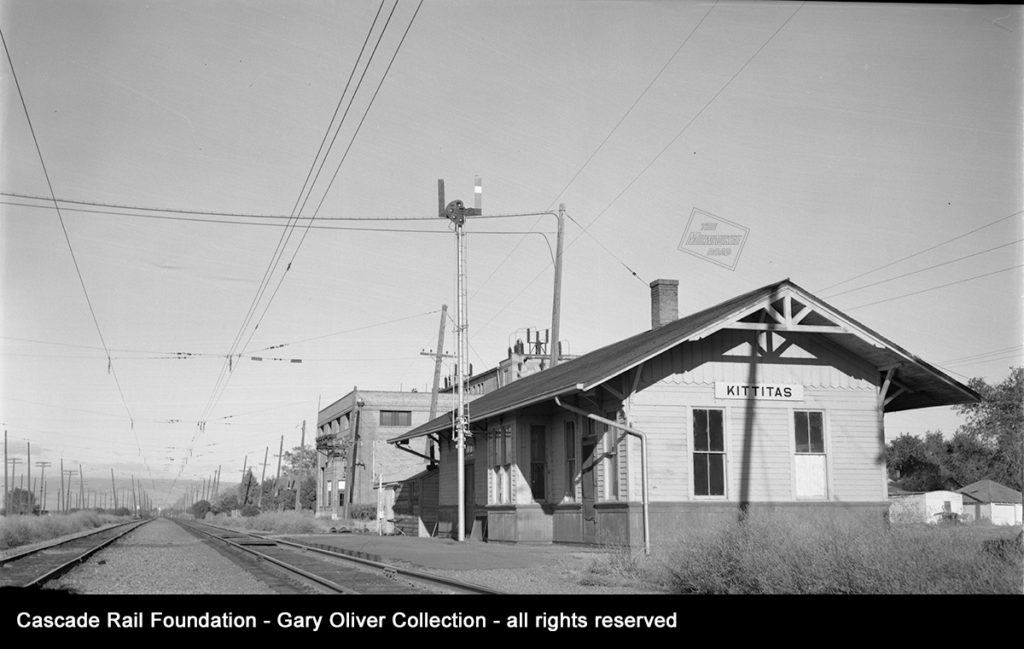 This August 1975 scene looks westward at Kittitas and includes the depot, the brick substation. Out of view behind the substation, facing the tracks, is a row of three company houses, or bungalows. Today the depot still stands and the substation is gone – just a concrete slab to remind us its role as a part of the railroad electrification. The three bungalows remain in place as private residences.

Kittitas was a major shipper of agricultural products and a destination for farmers receiving their supplies on the Milwaukee. Unlike Ellensburg and towns to the west, the Milwaukee Road served Kittitas exclusively and didn’t have to compete with the Northern Pacific for traffic here. 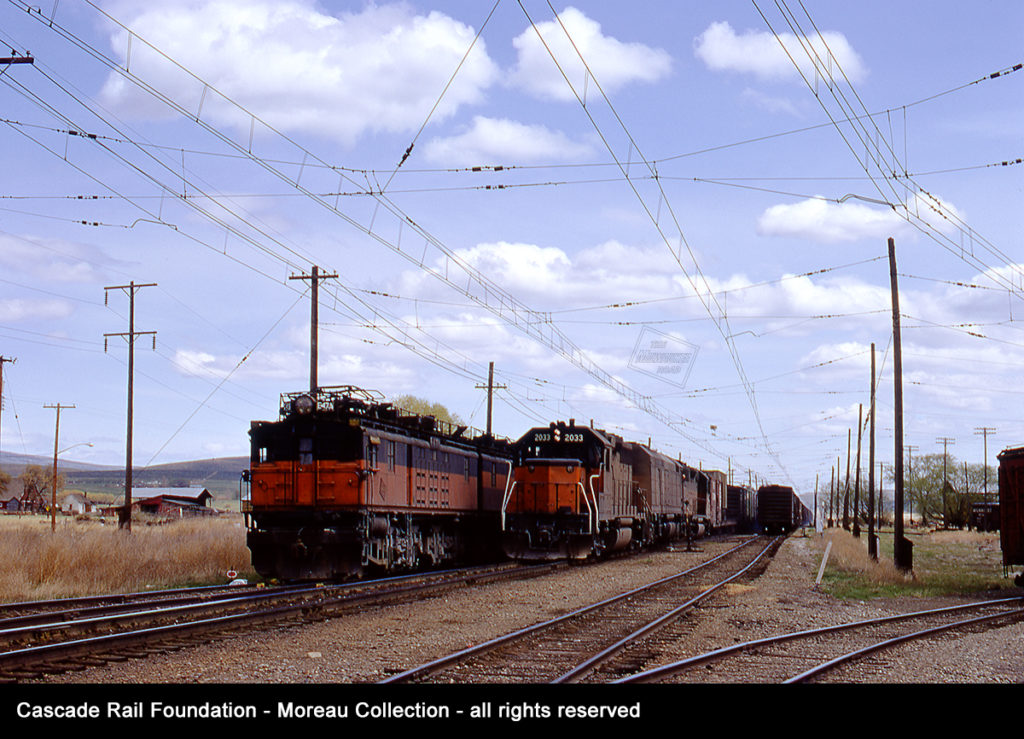 A westbound diesel powered freight led by MILW 2033 rolls past the electric E47A/E39A motor set just east of the Kittitas depot on April 29, 1971 in this Jeffery Moreau photo. 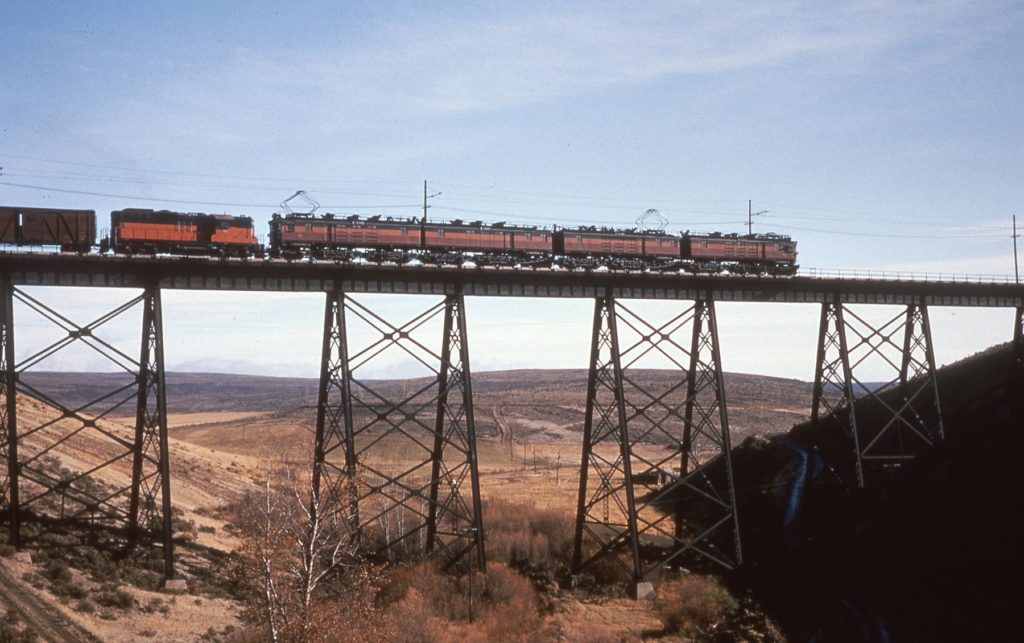 Renslow Trestle is a steel viaduct that spans the Johnson Creek Canyon. The crossing of the valley was initially a temporary wooden trestle, in use by 1909. In 1910, the wooden trestle was replaced by the steel span currently in place. The structure is 678 feet long, 12 span steel bridge, towering some 110 feet above the valley floor.

This eastbound freight, train 264, powered by a 4-unit electric motor set and accompanied by a diesel locomotive rumbles over the bridge in November 1964. Below the bridge is just a path through the sagebrush, but future Interstate 90 construction will be underway in 1968. Tom Gildersleeve photograph. 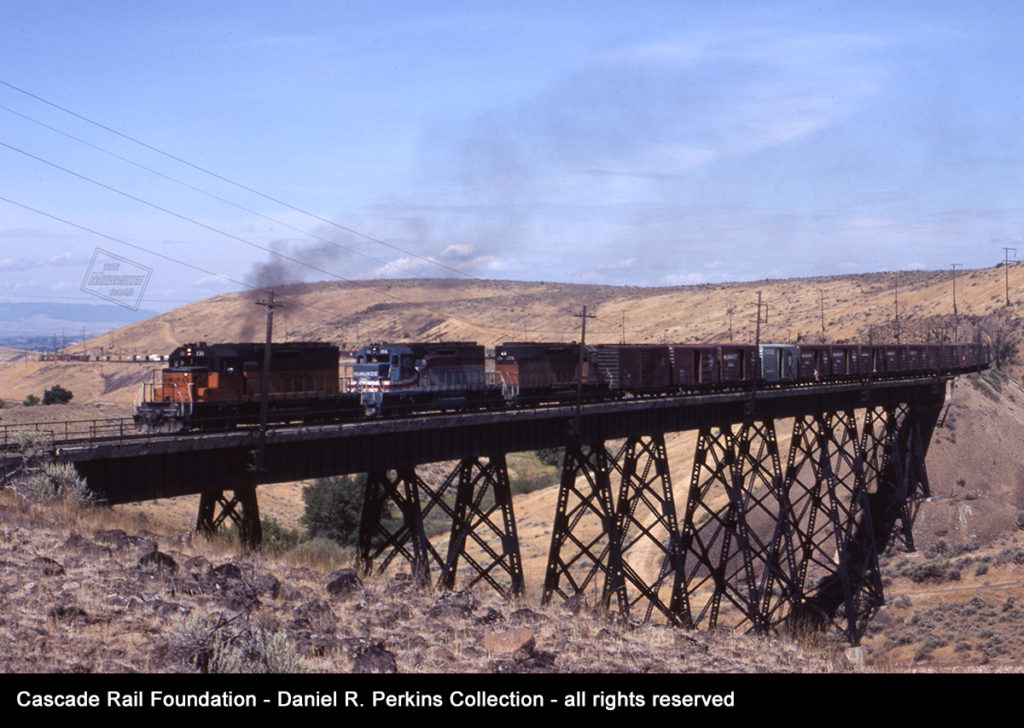 An eastbound freight crosses the Renslow Trestle as it climbs Boylston Hill on August 27, 1978. The second unit, #156 was a distinctive locomotive for the Milwaukee. The 156, seen in it’s special bicentennial paint scheme, was repainted in the patriotic colors in December 1974. It’s first run in red/white/blue paint was to lead train #201 departing Bensenville for Tacoma on December 6, 1974. The locomotive was repainted to the Milwaukee Road orange and black by November 1978. 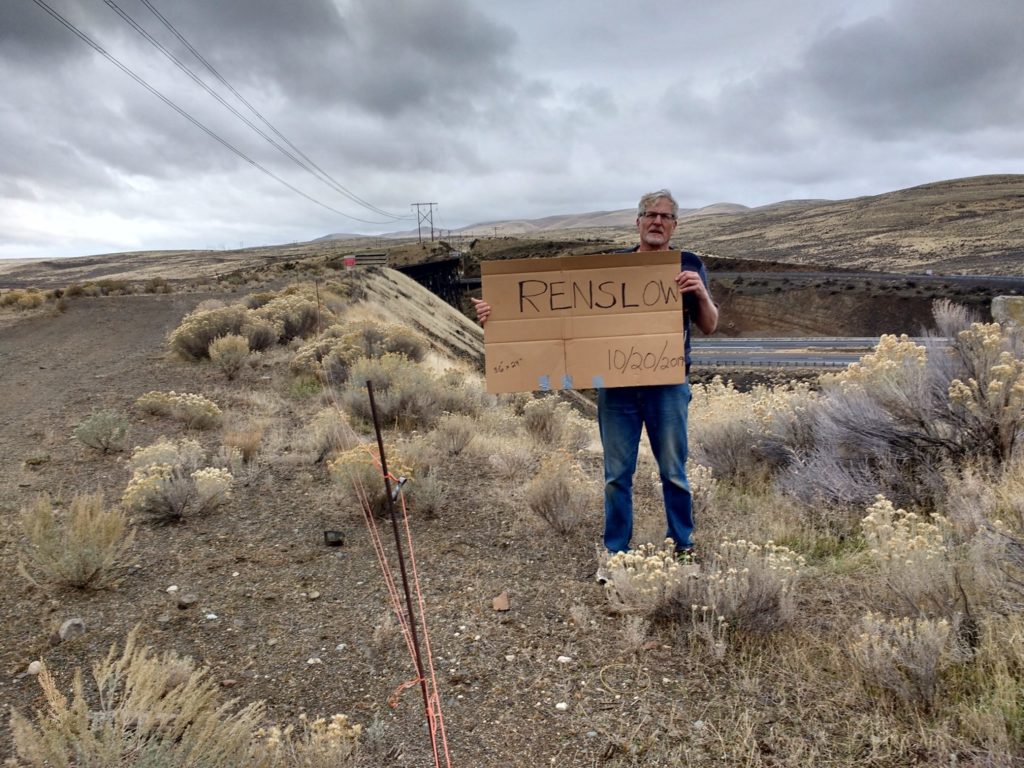 Washington State Parks is about to work on making the Renslow Trestle a transportation artery again. Decking and side railing will be installed on the bridge to accommodate non-motorized recreational traffic on it as part of the Palouse to Cascades State Park Trail. As part of this project, Cascade Rail Foundation and Milwaukee Road Historical Association are dedicated to providing volunteer interpretive support and content. In October 2019, Chris Scarlett holds a template of a future interpretive sign, seen on the north side of the bridge. 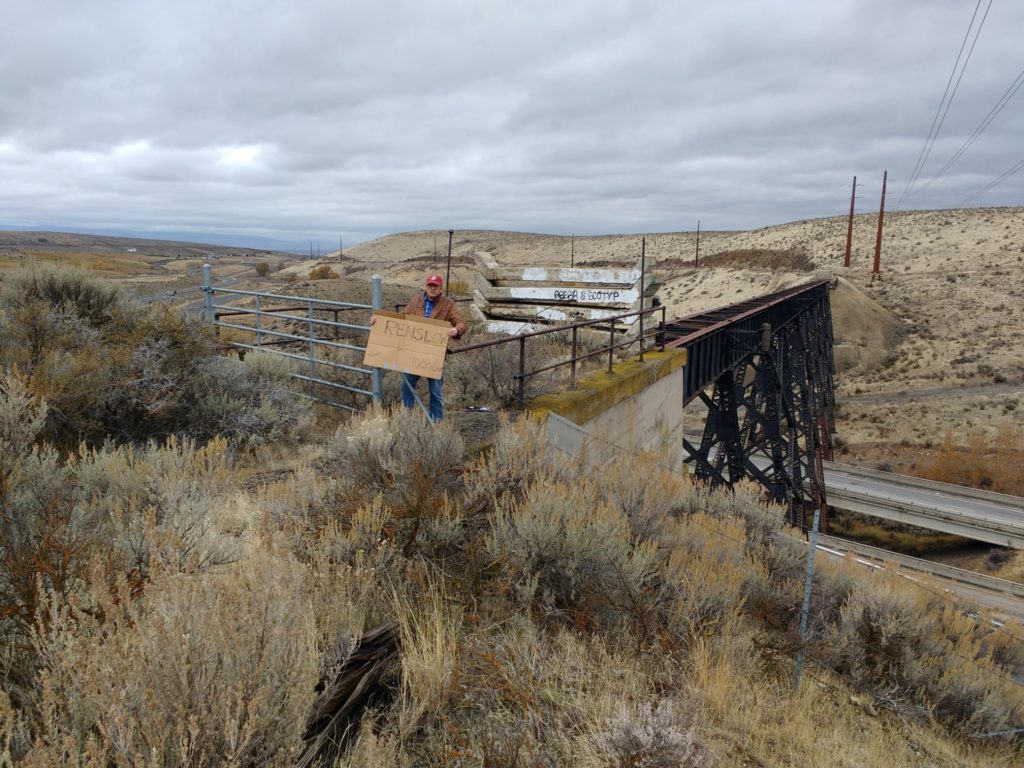 Tomorrow we head up Boylston Hill to the summit of the Saddle Mountains and descend down to the Columbia River.

Cascade Rail Foundation thanks Allen Miller and Rob Leachman for providing historical information about these photos.