Our virtual tour of the Milwaukee Road takes us along Pine Creek and into the valley it carved out through the Palouse. From Malden it takes us northward into a big loop, even briefly entering Spokane County, before heading south into Rosalia.

Compared to the landscapes of earlier, the hilly pine woods, croplands, and meandering river valley provides shade, calm, and a relaxing change of scenery.

Rosalia is a community with a history that precedes the arrival of the Milwaukee Road. It was visited by three railroads; the Northern Pacific P&L line, the Spokane & Inland Empire interurban, as well as the Milwaukee.
Passing along the hillside to the west of downtown Rosalia, we continue south and then enter a curve that once again sends us east.

To culminate the days tour we will cross the iconic Rosalia Concrete Arch Bridge, over two railroads and Pine Creek, and enter a deep cut that marks a daylighted tunnel. The trains are long gone, but the Milwaukee Road still provides an impressive show of railroad building across the beautiful countryside of the Palouse. 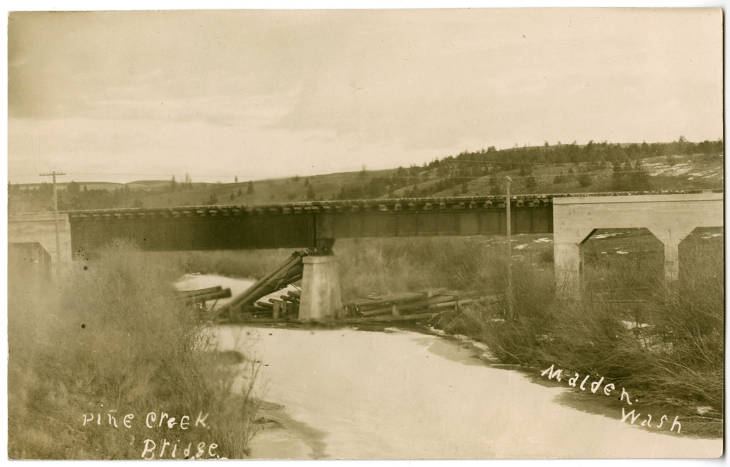 This is bridge EE-108 over Pine Creek. The bridge is 140-foot, two-span steel bridge with two 55-foot masonry abutments. In this photo, it appears to be getting the finishing touches as the construction of the railroad continues west. 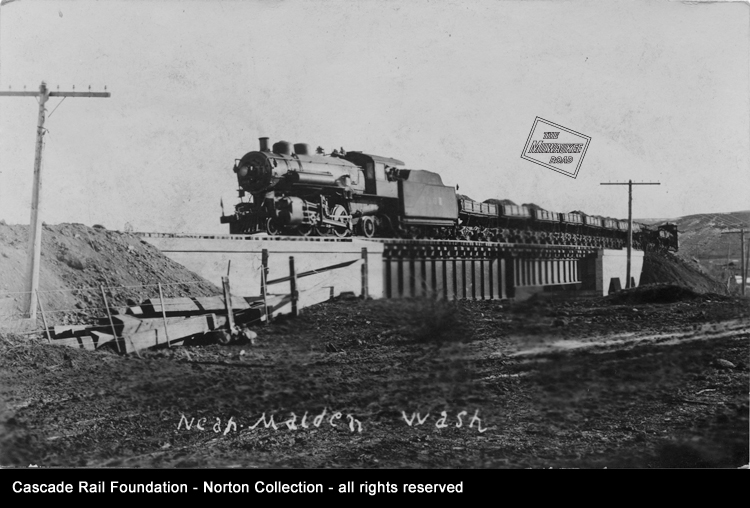 This postcard captures a construction train moving dirt and fill material as it crosses bridge EE-108 near Malden. The train may be part of the work to daylight the nearby tunnel. 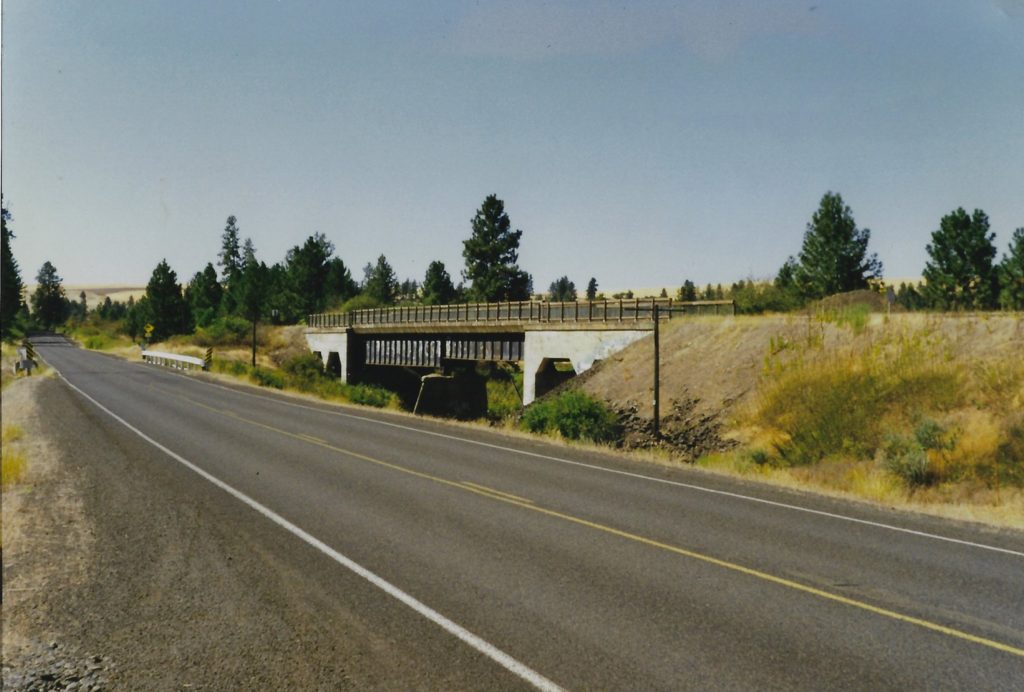 Here’s a more recent view of bridge EE-108, seen from Pine City-Malden Road east of Malden. This is one of several Milwaukee Road bridges crossing Pine Creek that can be seen from the road.

Continuing east we arrive at Squaw Canyon and see an eastbound freight passing the grain elevator and siding on April 11, 1976.. The station sign is attached to the signpost with a small telephone box on the the left. 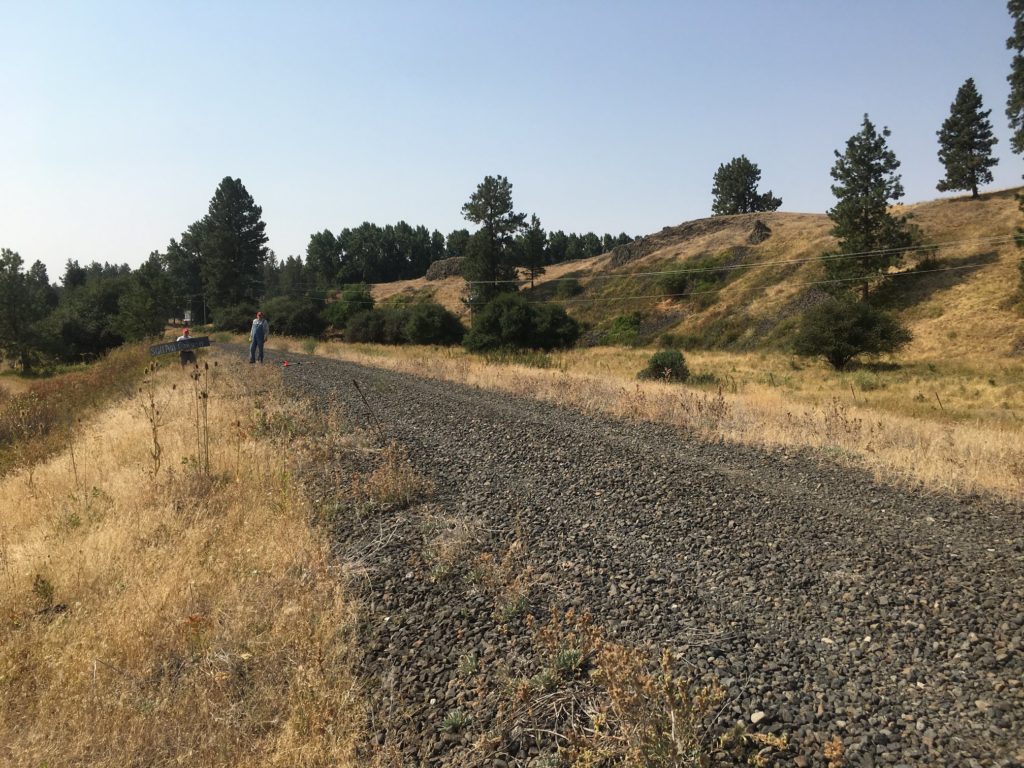 Here is Squaw Canyon as seen during the station sign project site visit in 2018. The grain elevator lasted decades after the 1980 railroad abandonment, but it also faded away. 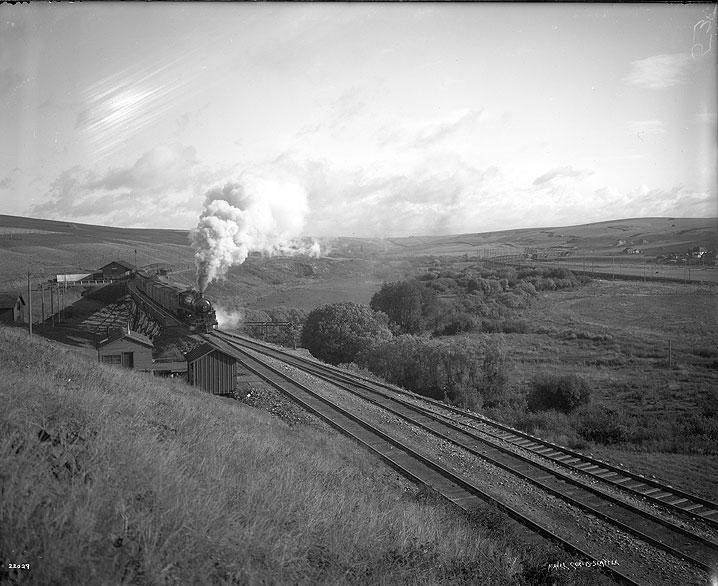 This train is approaching the Rosalia depot. The depot was north (west, on the railroad) of town. This early vintage Asahel Curtis photograph shows a passenger train crossing the bridge just south of he depot. To the right in the background is the curving trestle for the Spokane & Inland Empire Interurban line from Spokane to Colfax.

The Rosalia depot was a 24′ x 80′ Class “A” design built in the late summer of 1909 to replace a temporary depot. The agent for the first few years was E. P. Thomas. The second trick operator for several years was J. Pearl “Pete” Taylor, who had earlier worked for the Northern Pacific and held a night operator’s position at the N.P. Rosalia depot. 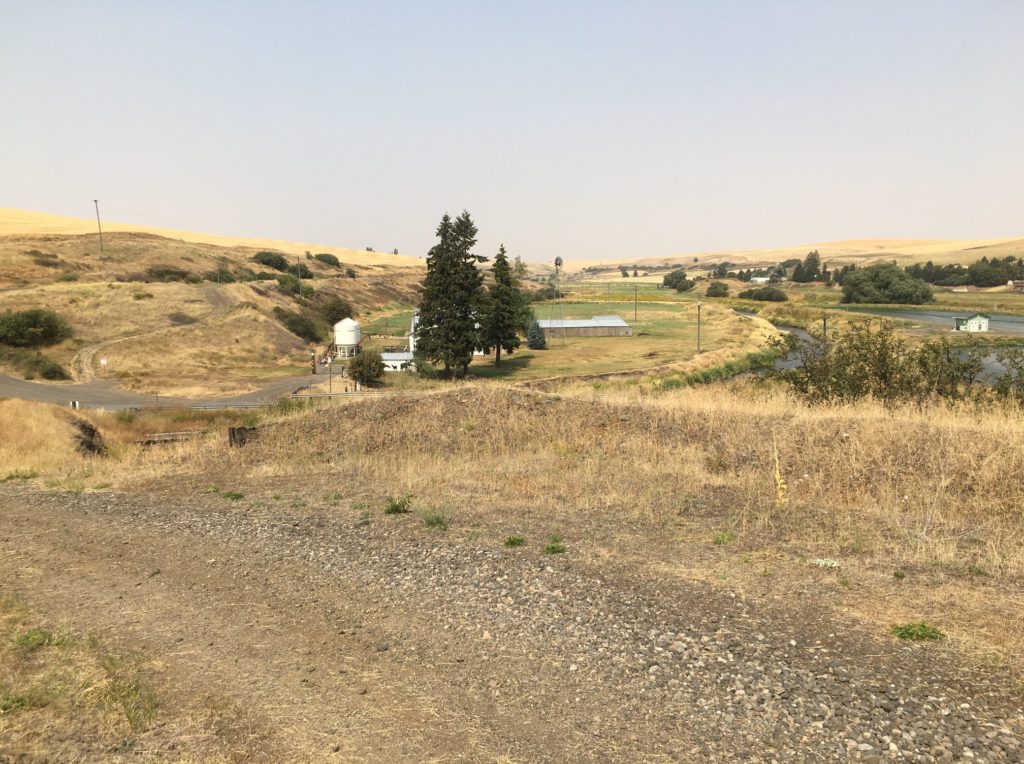 In a view similar to the one above, we are looking at the site of the Rosalia depot and the removed bridge near Gashous Road in Rosalia.

Photographed by Mark Borleske during the station sign project site visit of 2018. 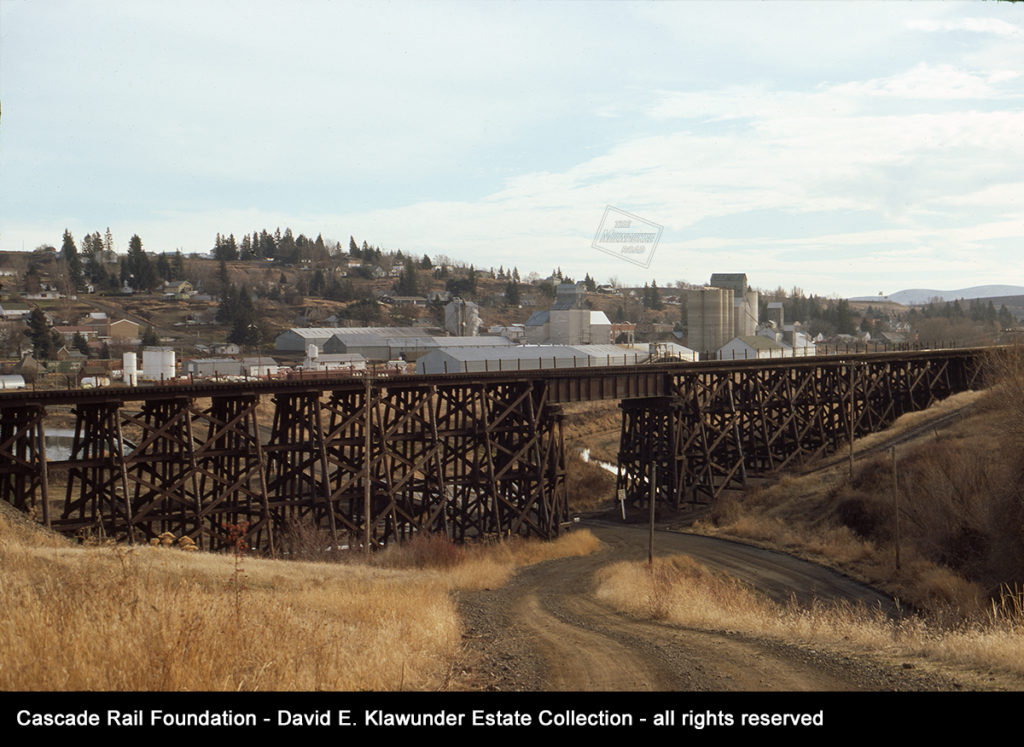 This is bridge EE-96, a 14-span pile bridge with a 50-foot deck girder span over Gashous Road, photographed on November 29, 1974. Downtown Rosalia can be seen in the background. Unfortunately this bridge was lost in a fire after abandonment. 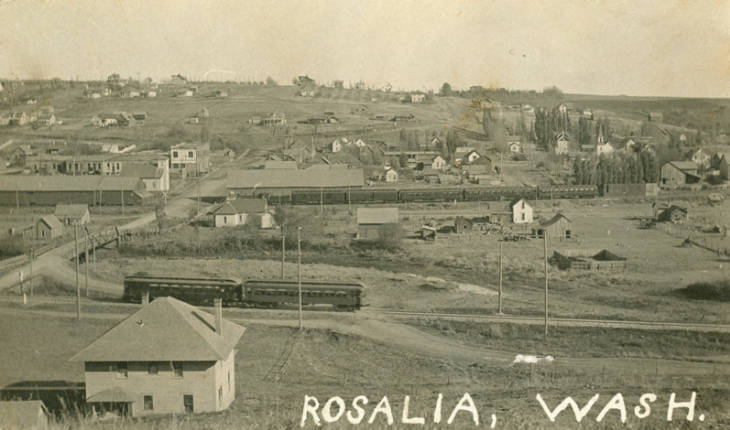 Rosalia circa 1920, with a view looking down on two railroads, taken from the third. From the Milwaukee Road grade we are looking east. The two car interurban electric of Spokane & Inland Empire ran between Spokane and Colfax. Further down is the Northern Pacific and their Palouse & Lewiston line (the “P&L” as it was commonly known). 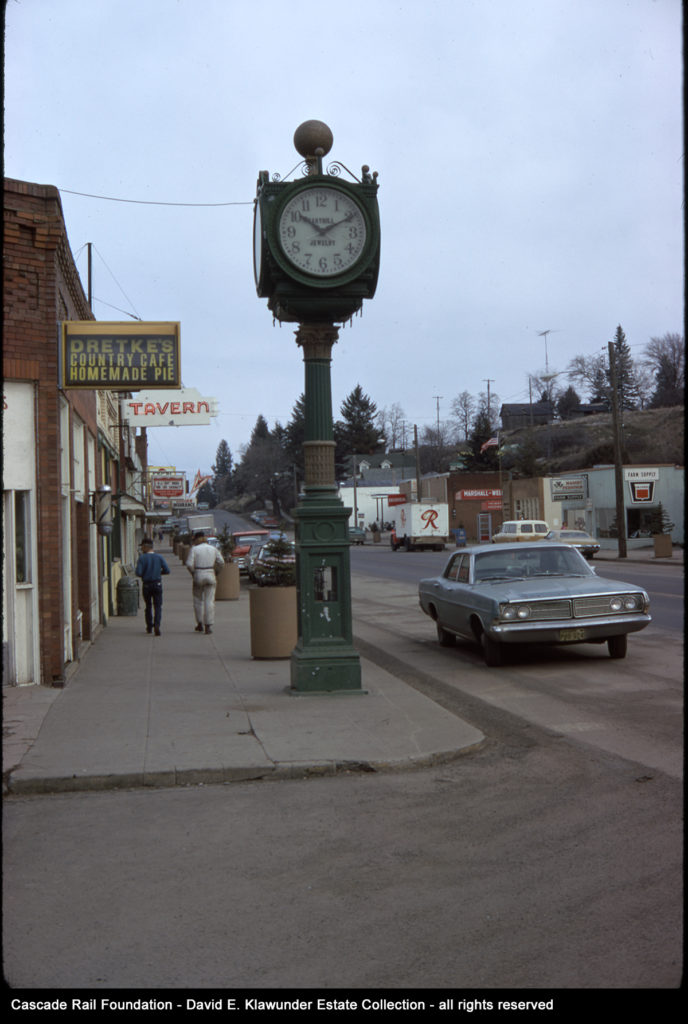 Rosalia is a picturesque and historic small town. On February 12,1974, David Klawunder captured this street scene in Rosalia, looking north on Whitman Avenue, the main street.

On the first Saturday of June, in normal times there would be a parade down this street, including the John Wayne Pioneer Wagons & Riders parading through town with their horses, wagons and accompanying bicyclists on their way to Tekoa. After the parade there are street dances, art fairs, a car show, pinup girls, a rodeo, and barrel racing – all a part of Rosalia’s Battle Days celebration. We look forward to Battle Days in 2021.

This Milwaukee Road eastbound train is just south of Rosalia and running through cuts along the rolling Palouse hills on the way to the Rosalia Concrete Arch Bridges. Photo taken on March 29, 1975. 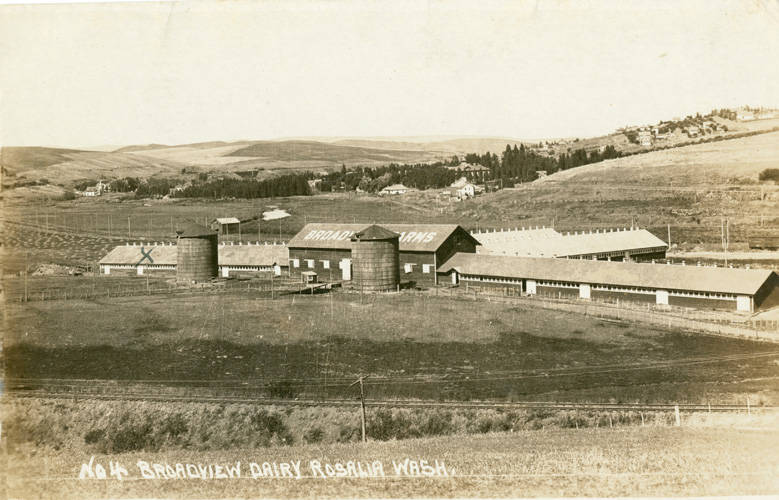 South of Rosalia was the Broadview Dairy Farm. It had a milking barn with stalls for 625 cows at a milking, reputed to be the world’s largest at the time. This photo was taken in the 1913 to 1925 timeframe.

Looking northeast towards Rosalia, the tracks in the foreground are the those of the Milwaukee Road. The electric poles of the Spokane & Inland Empire interurban accentuate their route on the other side of the dairy complex. The interurban has a stop and a milk can loading platform named Broadview, where shipments would go to the Broadview Dairy Plant in Spokane. Beyond, the faint cut in the hillside of the Northern Pacific P&L Line. Note the large lettering: BROADVIEW FARMS on he roof of the dairy barn. 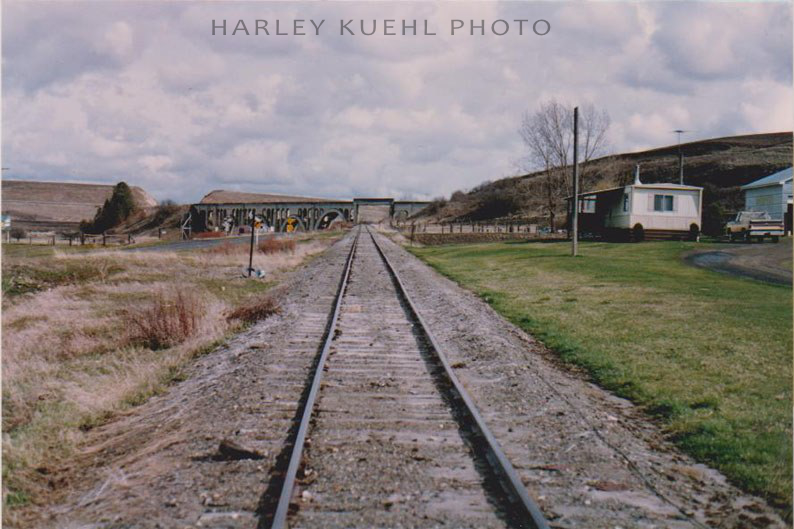 This photo was taken looking south on the former Spokane & Inland Empire, in the general vicinity of the Broadview Dairy stop. The undercrossing of the Milwaukee Road at the Rosalia Concrete Arch Bridge is straight ahead.

The Spokane & Inland Empire interurban electric rail line began service in 1907, ended interurban passenger service in 1937, and dieselized in 1940. It became the Great Northern line to Colfax and became part of the Burlington Northern in 1970. This branch line was eventually abandoned. 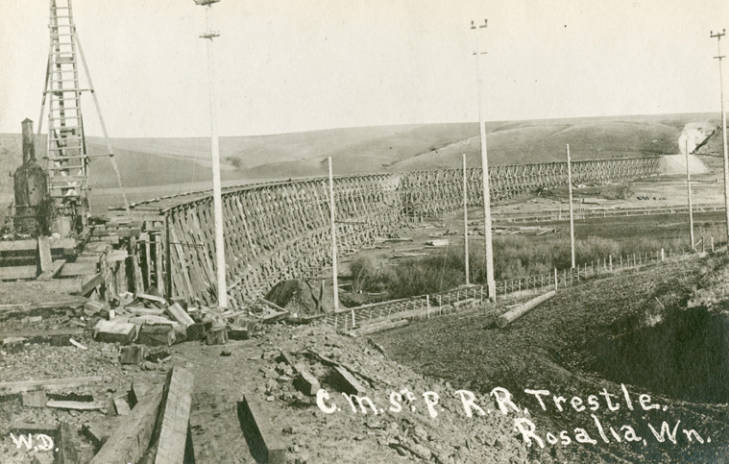 This is bridge EE-90, the original timber bridge built by the Milwaukee Road across the Pine Creek Valley. It was a curved temporary wood trestle, 2,177-feet long, built in 1907. This wooden structure served as a temporary expedient to get the railroad open to traffic from the Missouri River valley to Puget Sound in just three years.  It carried the Milwaukee Road above the Spokane & Inland Empire interurban line, Pine Creek, and the Northern Pacific P&L Branch.

The bridge served the railroad well, until the railroad replaced it with a permanent bridge during 1914 and 1915. The replacement bridge consisted of two separate concrete arch bridges separated by a 334-foot section of earthen fill embankment.

Just east of the bridge was Tunnel 42. It collapsed in 1911 and was “daylighted” by removing the top of the tunnel, resulting in a deep cut instead. Some of the fill material used for the new bridge came from the removal of the tunnel. 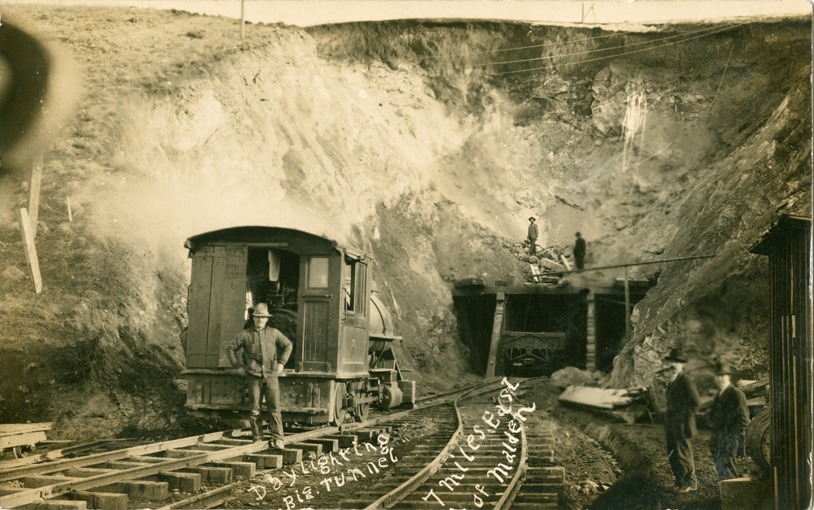 Tunnel 42 was south of Rosalia and just east of where Highway 195 crosses over the Milwaukee Road right of way. When the tunnel was daylighted in 1911, the material was used to partially fill the adjacent bridge EE-90, turning it into bridges EE-90A and EE-90B. Three years later they were converted into the two beautiful concrete arch bridges we see today. 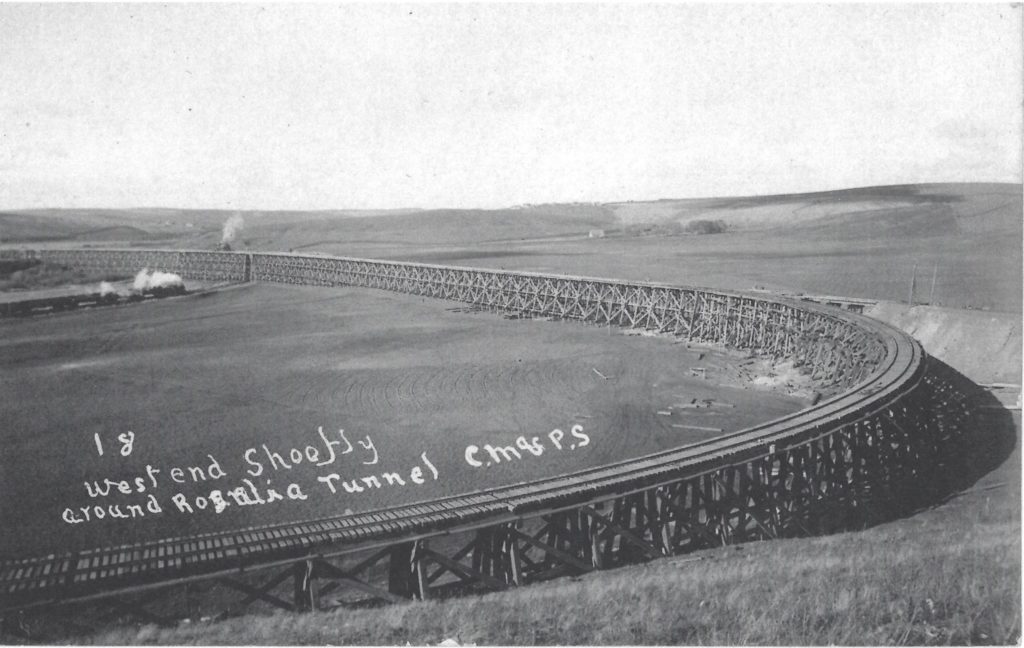 The sweeping curve on the wooden trestle in the foreground is the ‘shoefly’ detour built to get trains around the  collapsed Tunnel 42, out of view to the right. The track on the fill to the right will be the eventual mainline grade that will go into the cut created by daylighting the tunnel. This shoefly dates the photo to 1911.

Notice the Northern Pacific steam train heading north about to go under the bridge towards Rosalia. There is a plume of smoke from a Milwaukee Road construction locomotive above it, on the bridge.

The photo orientation is looking north, with the long straight bridge piers, left to the west, becoming the eventual alignment for the new Concrete Arch Bridges and fill.

Photo courtesy of Dan Brady, from his collection. 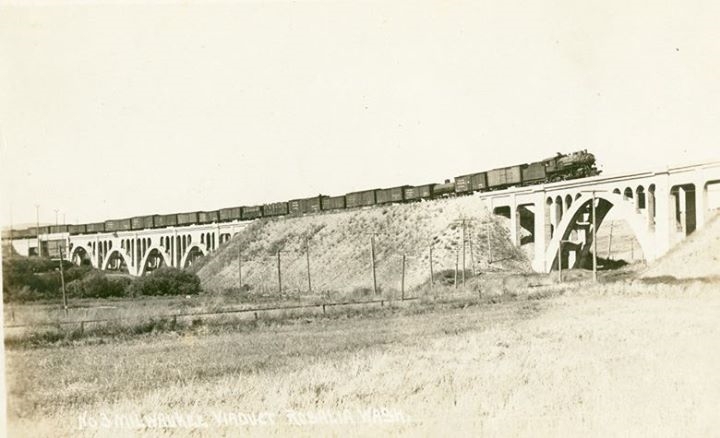 This 1920s vintage photo shows an eastbound freight train crossing the two components of the Rosalia Concrete Arch Bridge. The steam locomotive is just about to cross the Northern Pacific P&L Line. The concrete arches for this bridge were created for aesthetics as well as functionality. The appearance had to be considered important in the design, crossing two railroads, a county road, and a creek. 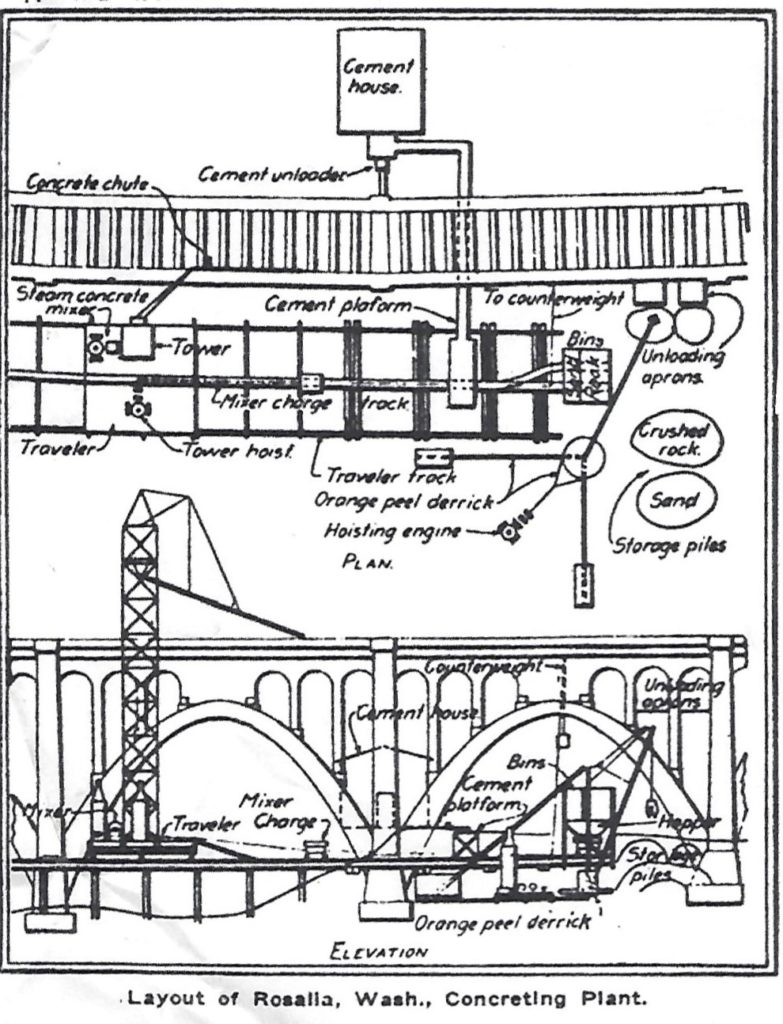 The unique construction of the bridge was covered by trade journals and the railroad engineering and construction industry. The construction was noted in the Railway Age Gazette (February 1916), as well as the book Bridge Engineering by J.A.L. Waddell, published in 1916.  This illustration shows how concrete was mixed onsite and moved to where it was needed.  A crane on was installed on rails temporarily set on the valley floor. The concrete was sent up to the towering structure, where the chute would direct the concrete pour below.

Drawing courtesy of Mark Borleske, from his collection. 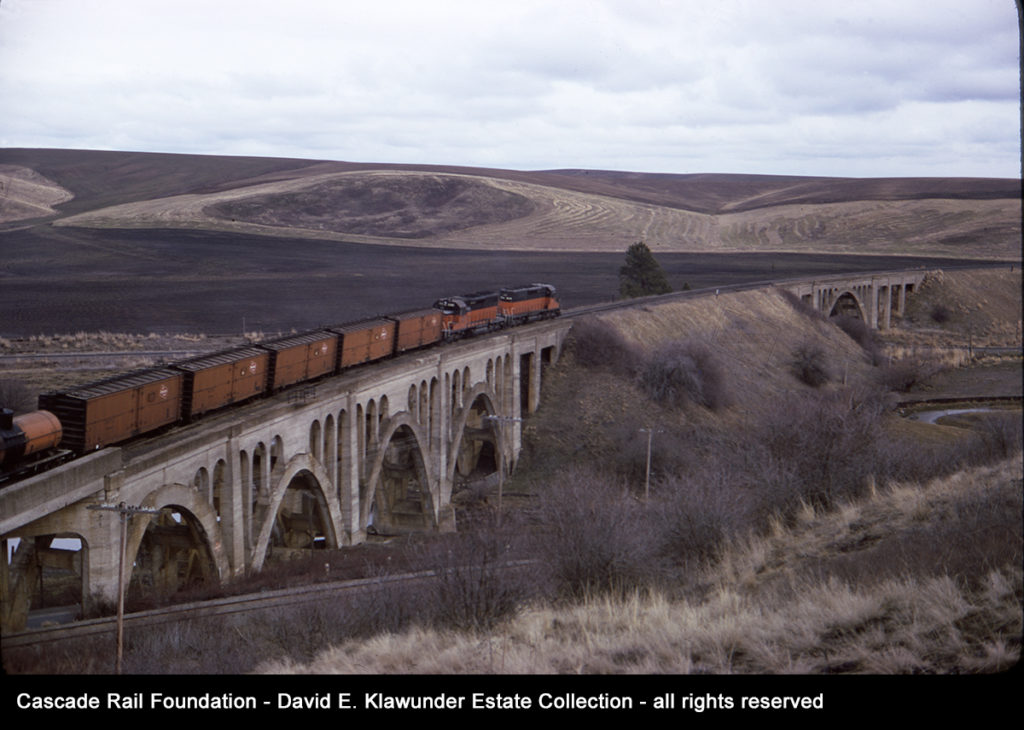 An eastbound Milwaukee Road freight train passes over the Rosalia Concrete Arch Bridge on February 12, 1974. On the head end are ice bunker refrigerator cars of perishable traffic, likely from the Othello and Warden area, for eastern destinations. .

Meandering Pine Creek can be seen below. This bridge was sometimes known as Pine Creek Crossing #1. being the first of many crossings of Pine Creek that included Rosalia, several on the way to Malden, Pine City,  and just before the Pine Creek outfall into Rock Lake. 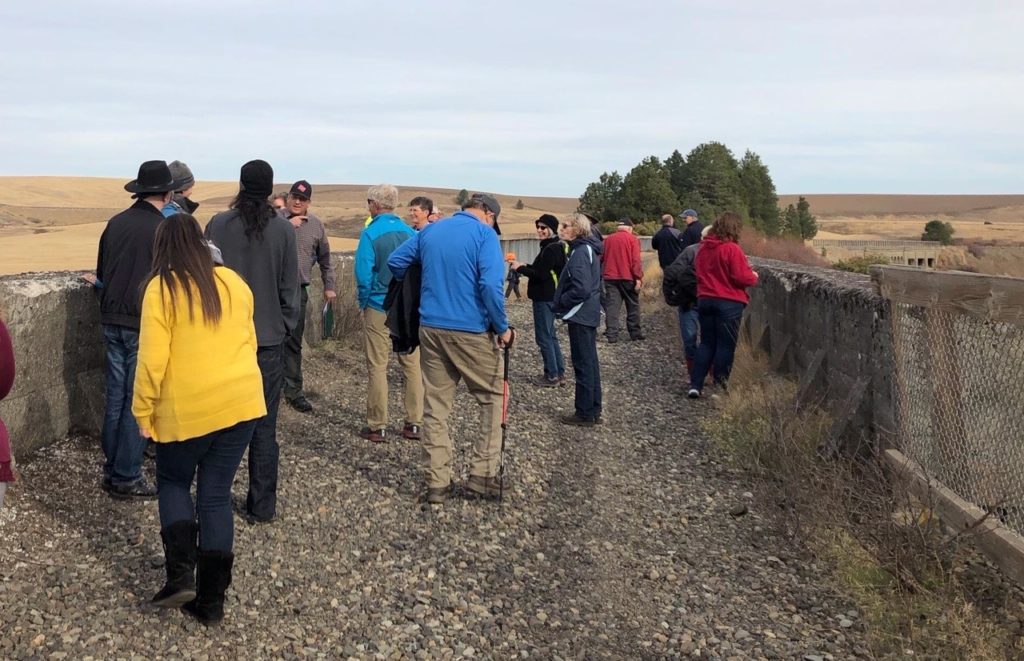 Each Fall since 2017, Cascade Rail Foundation and Whitman County Library have sponsored Bridge Days. The event includes a “history hike” out on the historic Rosalia Concrete Arch Bridges. This tour covers a short section of what is now a very long trail rich in history. The Rosalia Railroad Bridge is designated on the National Registry of Historic Places .

The Rosalia Concrete Arch Bridge is an outstanding lasting reminder of railroad engineering and aesthetics from the early 20th Century. It is a fitting way to cross Pine Creek in the setting of the lush hills of the Palouse. Today, instead of trains, it carries people using the Palouse to Cascades Trail. Here we are looking westward down the trail. 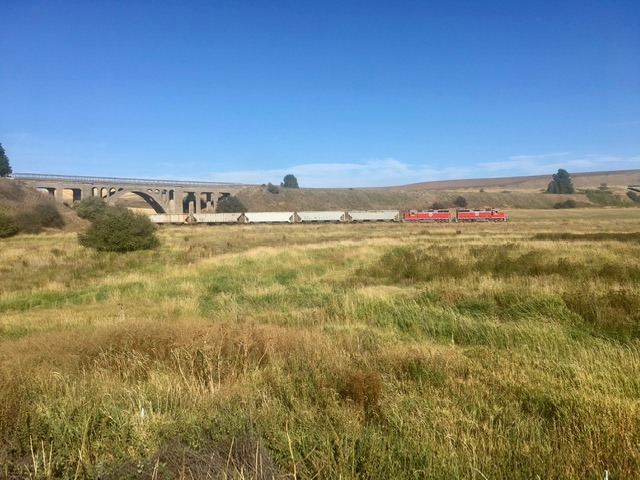 While the Milwaukee Road is gone, trains can still be seen at the Rosalia Concrete Arch Bridge. This freight train of empty grain hoppers is heading south under the bridge. The large unit train loadout at McCoy has been the saving grace of this section of the former Northern Pacific P&L Line. The line is now owned by the State of Washington and managed by the Washington State Department of Transportation. A succession of shortline operators has operated the line. The current operator is the Spokane, Spangle & Palouse.

Tomorrow we travel through more of the scenic Palouse landscape to Tekoa, Washington, where a massive steel trestle serves as a symbol of the community.