Our Milwaukee Road Coast Division virtual tour across Washington continues as we travel from Warden to Lind. The landscape changes as we move east, leaving the irrigated croplands of the Columbia Basin Project and entering the Channeled Scablands. The railroad went up the Lind Coulee, scoured out by the Ice Age Floods. It can be lonely country, yet the stark features of the hills, valleys, rock formations and big horizon views offer a sense of drama to these seemingly quiet places. As we continue east, we are traveling through wheat lands, where every community, regardless of size, has a grain elevator – part of America’s breadbasket. 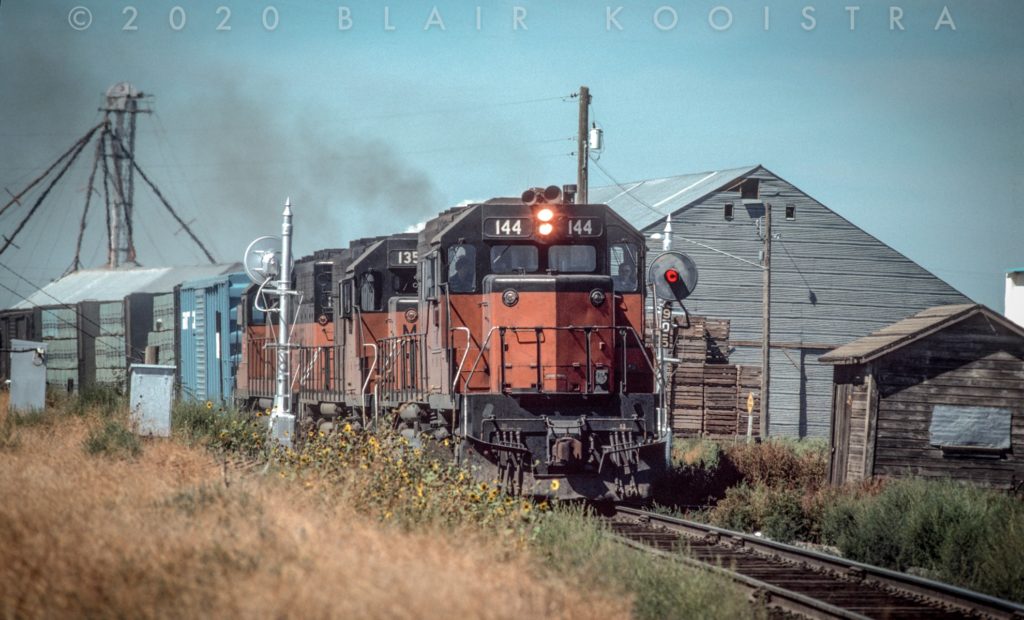 On August 29, 1978, train #200 is seen blasting through Warden past the feed mills and seed houses as it splits the GRS short-mast searchlight signals. These signals were part of the Automatic Block Signal protection for trains found between Marengo and Othello. When originally installed as semaphore signals, they allowed higher speeds for passenger trains than the unsignaled “dark” section of railroad from Marengo to Plummer Junction.
Blair Kooistra photo and narrative. 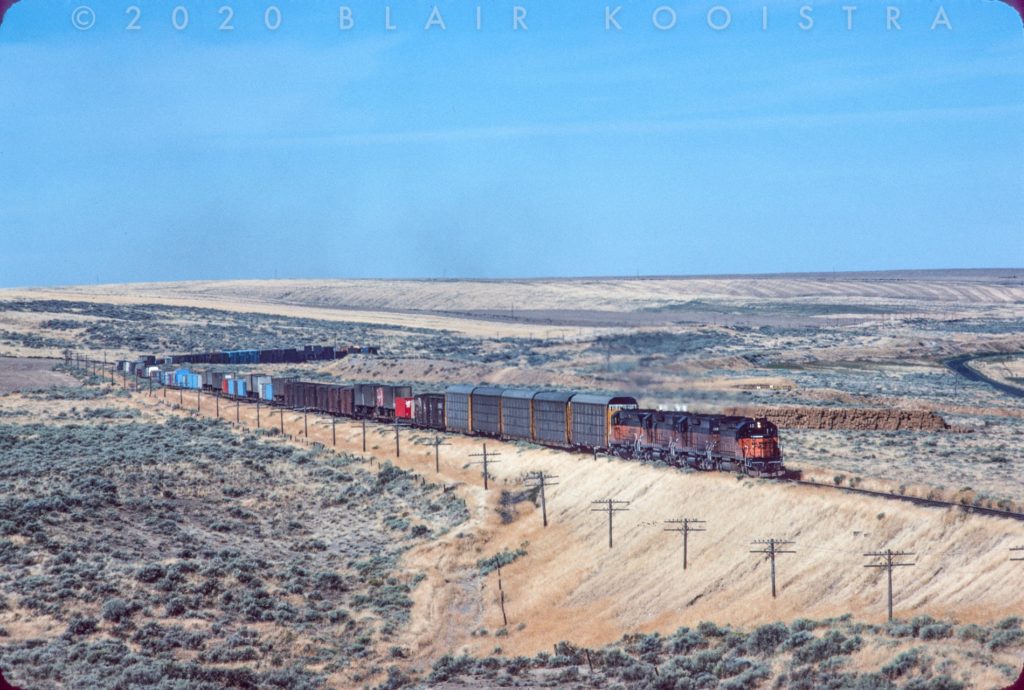 A few days earlier than the photo at Warden above, train #200 is captured between Warden and Roxboro crossing the big fill on August 26, 1978. A prosperous train for this late date, the head end cars are probably the setout for Spokane at Plummer, followed by the refrigerated cars of potatoes picked up in Othello, and then a nice string of containers and trailers from the Port of Seattle picked up at Black River. Blair Kooistra photo and narrative. 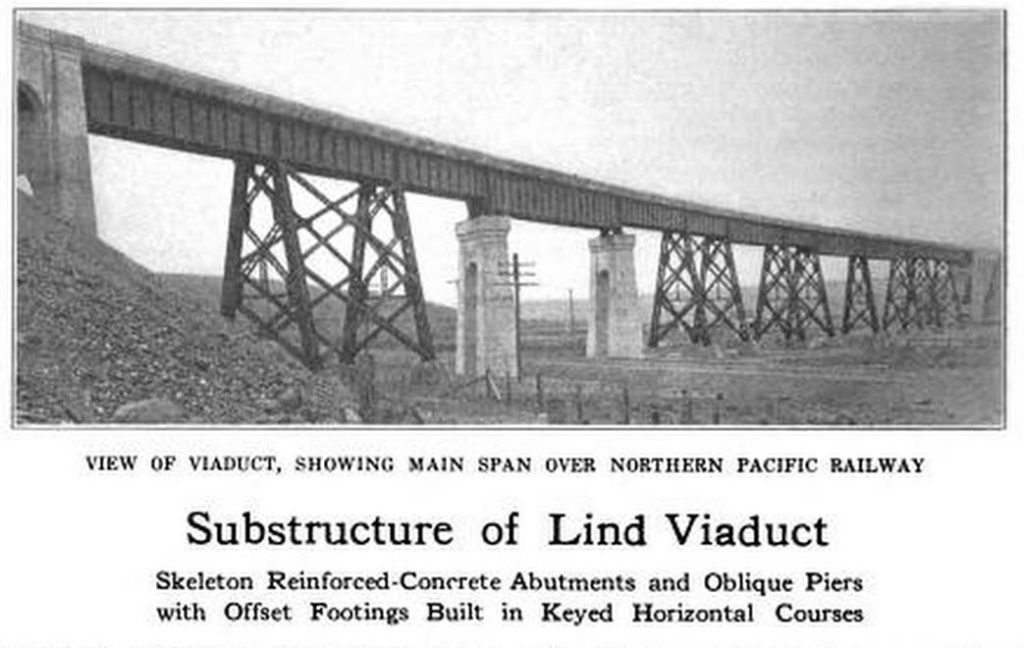 In 1909, the Milwaukee Road crossed over the Northern Pacific Railway’s main line. The initial bridge was a large wooden trestle. As done elsewhere, the Milwaukee replaced the temporary wooden bridge with something more substantial, in this case a steel bridge.  The railroad designated it Bridge EE194A, an 830-foot long structure on 13 spans. The concrete piers in the middle marked the overcrossing of the Northern Pacific Pasco-Spokane main line on its route to Seattle. This view was published in an article from Engineering Record published on September 26, 1914. Thanks to Ryan Reed for locating and sharing it. 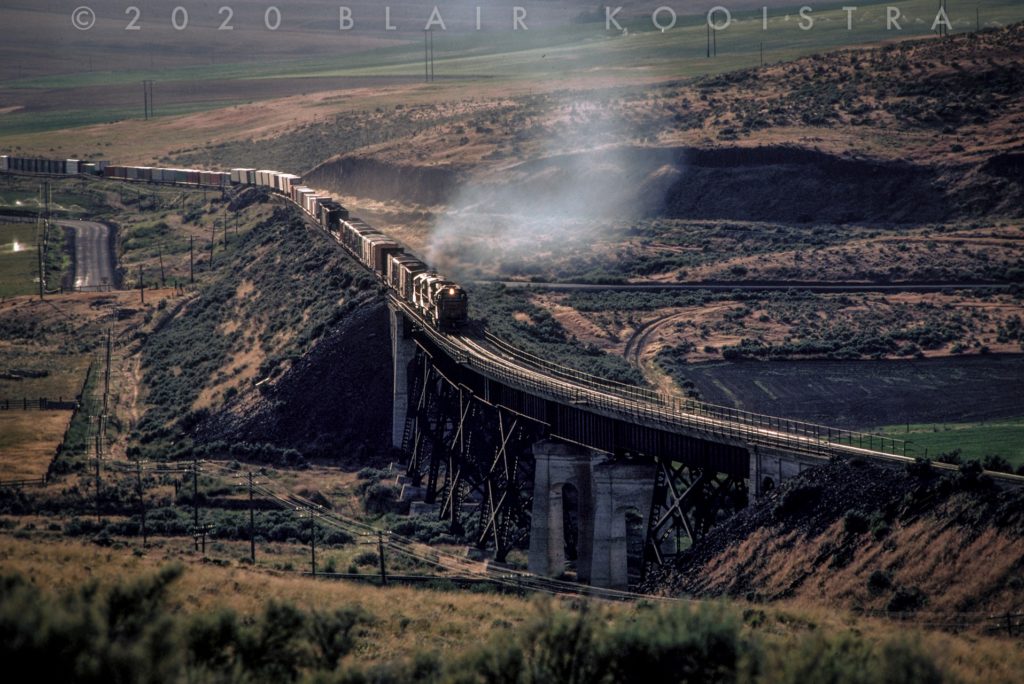 And here’s a favorite, another view of train #200 taken at Lind in June 1979. By this time, this was the last “scheduled” freight on the railroad (extras, or “dead freights”, also operated several times a week) as traffic had shrunk. Running several hours later than it had the year before, train #200 is crossing the big steel bridge across Lind Coulee and the Burlington Northern mainline (formerly the Northern Pacific) late in the afternoon. The train is still assembled the same way, with an Othello pickup on the head end followed by the Seattle intermodal pickup from Black River, and a few British Columbia Railway lumber boxcars are visible as well. Photo and narrative by Blair Kooistra. 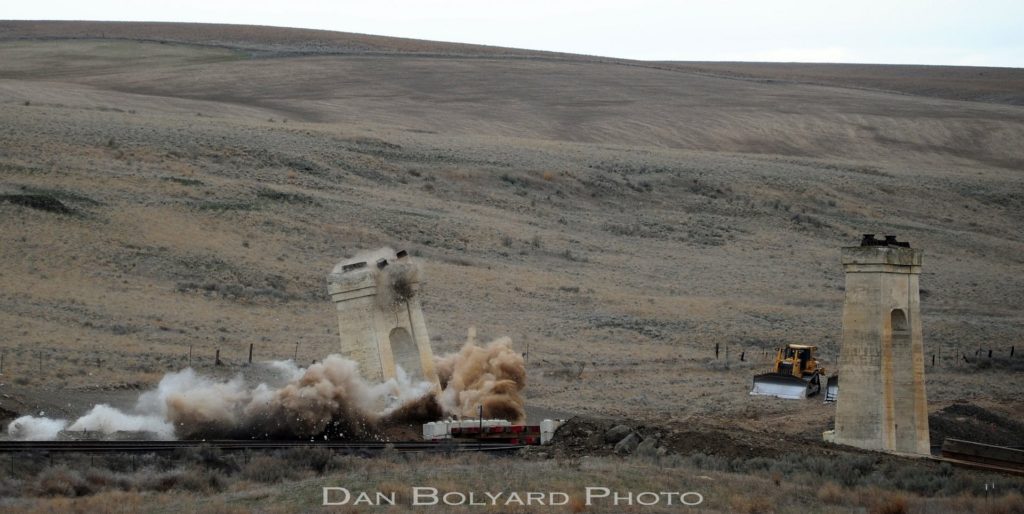 On March 15, 2014, the demolition crew working on behalf of BNSF Railway had finally finished preparations to remove one of the pillars of the Milwaukee Road bridge at Lind. It was in the way of a double-track project, adding second main track on the old Northern Pacific line over Providence Hill. While the initial blast had been set for like 7 a.m., it wasn’t until after 1 p.m. that the blast finally was let off. Photo and narrative by Dan Bolyard. 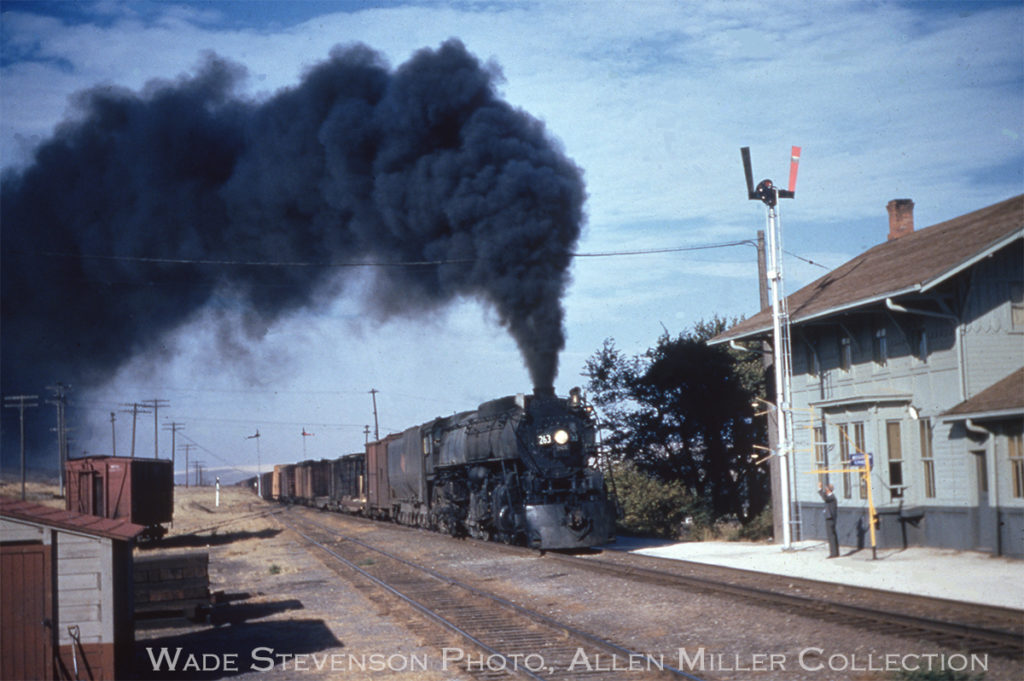 An eastbound freight with a modern steam locomotive, 4-8-4 #263, races past the depot at Lind. The agent/operator is dutifully standing on platform to do a roll by inspection of the train. The train order signal at vertical position means no train orders, but the train order stand (yellow) with the delivery forks holds messages to be picked up by train crew at speed. The top fork is the message for the head end crew (engineer, fireman, head end brakeman) and the lower delivery fork has message for the rear end crew (conductor, rear brakeman). The blue sign near the bay window advertises this as a Western Union telegraph office, where commercial telegrams could be sent. The semaphore signals at the west end of the siding can be seen in the distance. Mark Borleske narrative. Wade Stevenson photo from the Allen Miller collection. 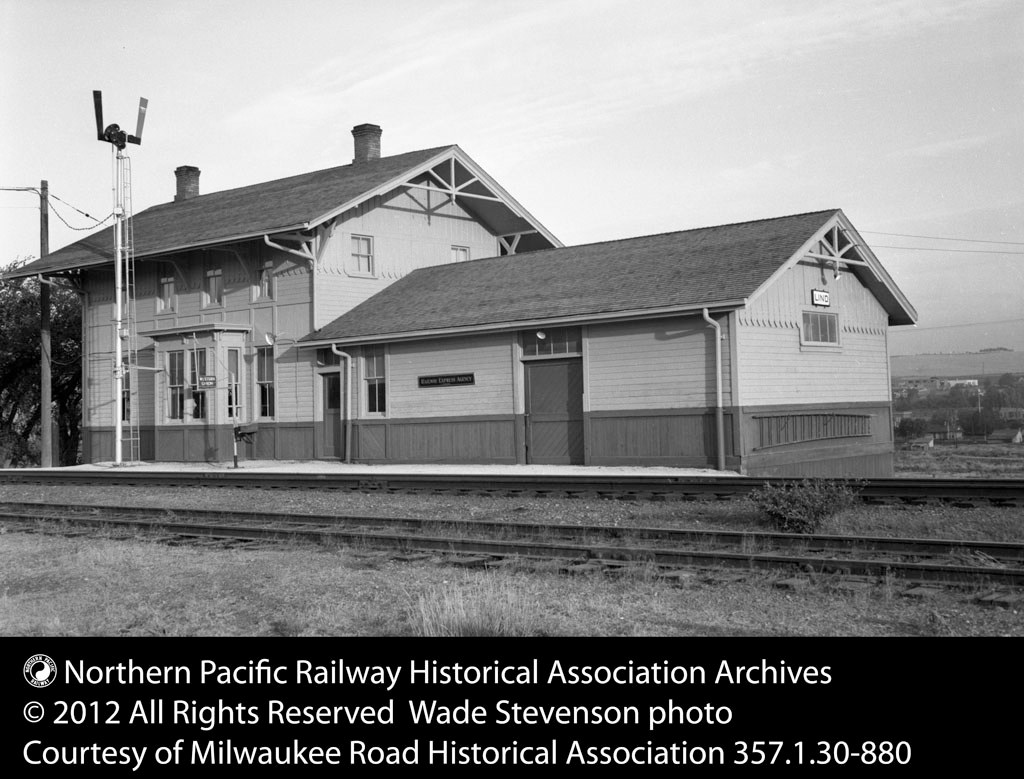 The two-story depot at Lind had living quarters for the agent upstairs. Depots with accommodations were used by the Milwaukee on the Pacific Coast Extension in a number of locations, including several in the Dakotas. Wade Stevenson photo from the Northern Pacific Railway Historical Association archives. 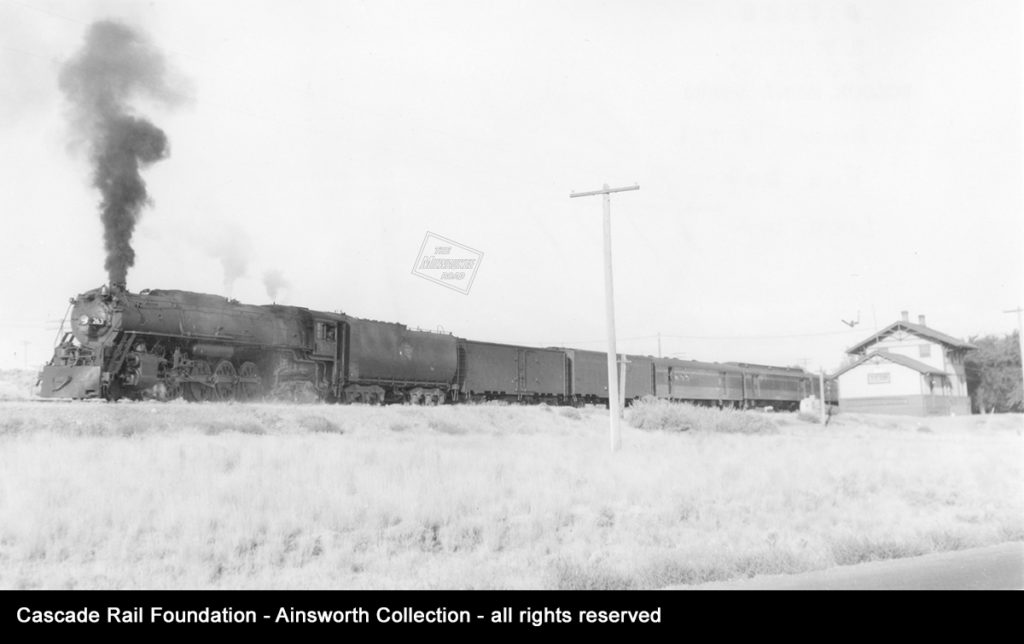 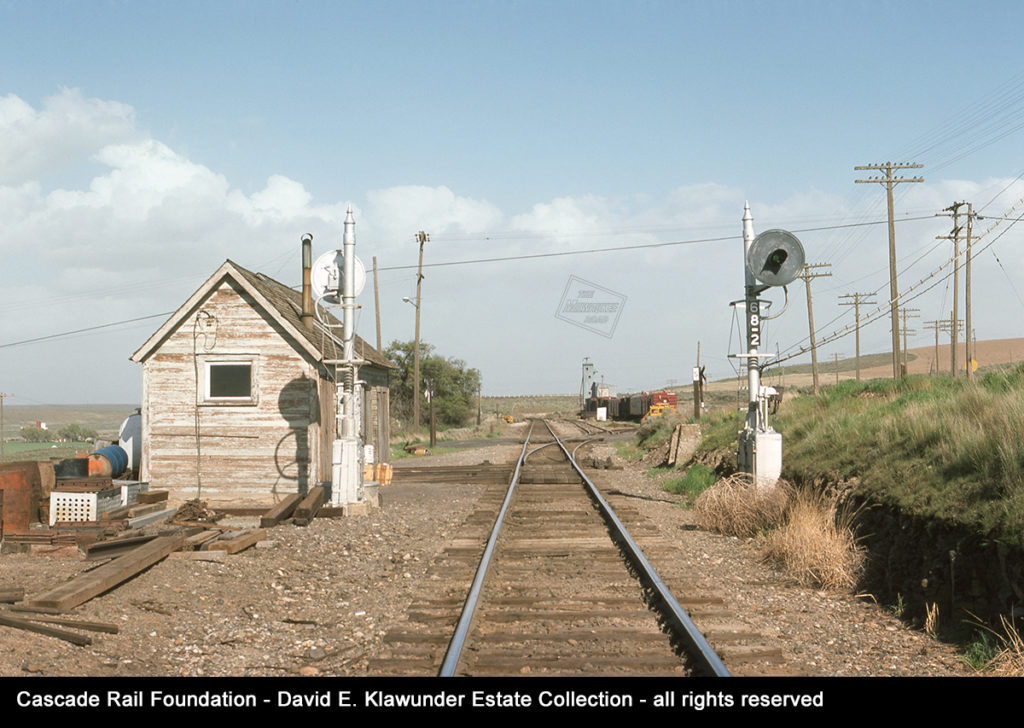 This view is looking east to the end of the passing track at Lind on May 2, 1976. The Lind depot site is among the shade trees on the left. The block signals have replaced old style semaphore signals from an earlier photo, using the shortened masts from the semaphores. David Klawunder photo in the Cascade Rail Foundation David E. Klawunder Estate Collection.

Tomorrow we will travel through the land of the Ice Age Floods from Lind to Ralston.