Continuing east on our virtual tour across Washington, today we travel through Kenova to the community of Pine City on our way to Malden. 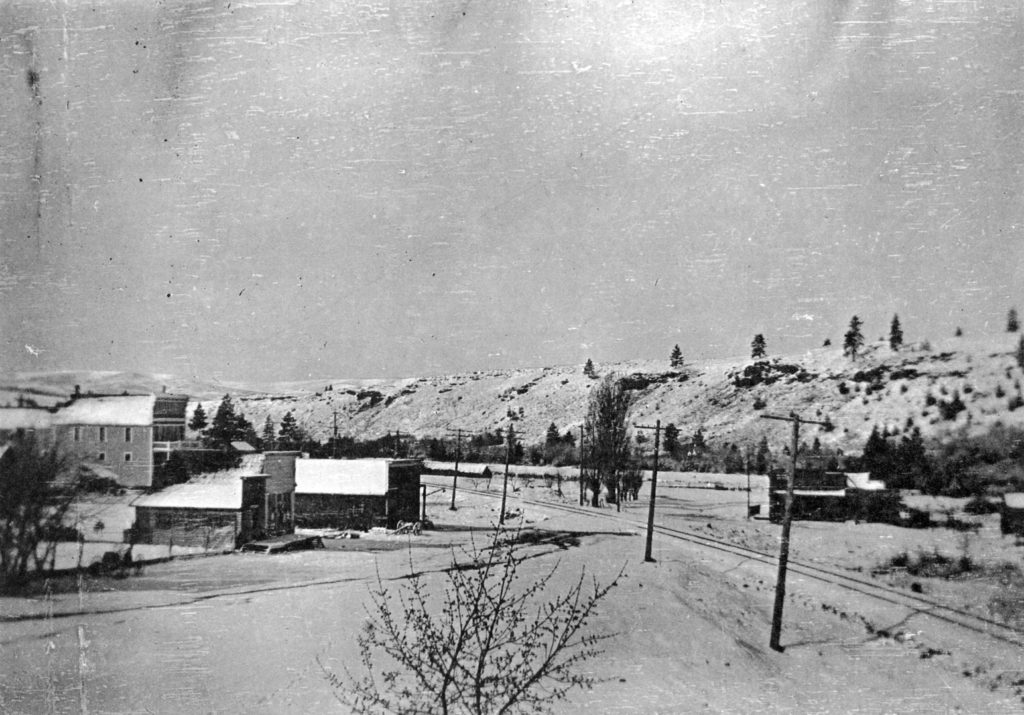 Pine City was established before the Milwaukee Road arrived, plotted between 1878 and 1881.  It was located on a strategic north-south trail between Walla Walla and Colville. The town had a flour mill that was moved to accommodate the location of the new railroad. Here we see Pine City circa 1910, shortly after the railroad opened. This view is looking east, with Pine Creek at the base of the hills. 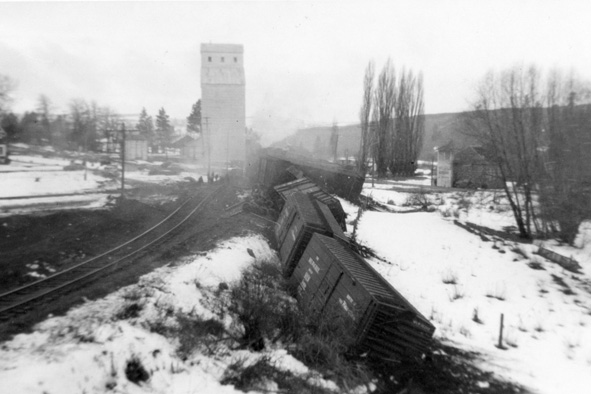 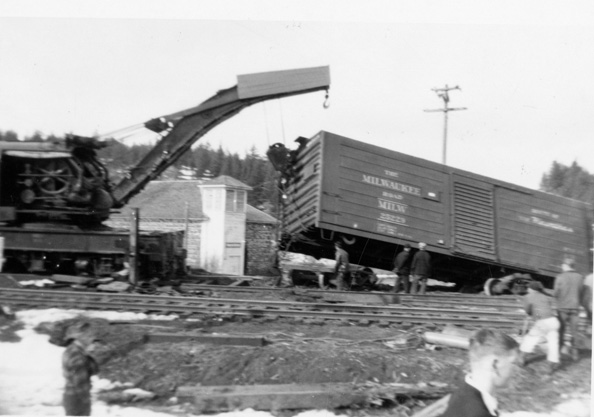 Here is another view of the March 1950 derailment. The stone church in the background is now the home of Pine City Historical Society. It looks like a lot of snow melted from the previous photo. 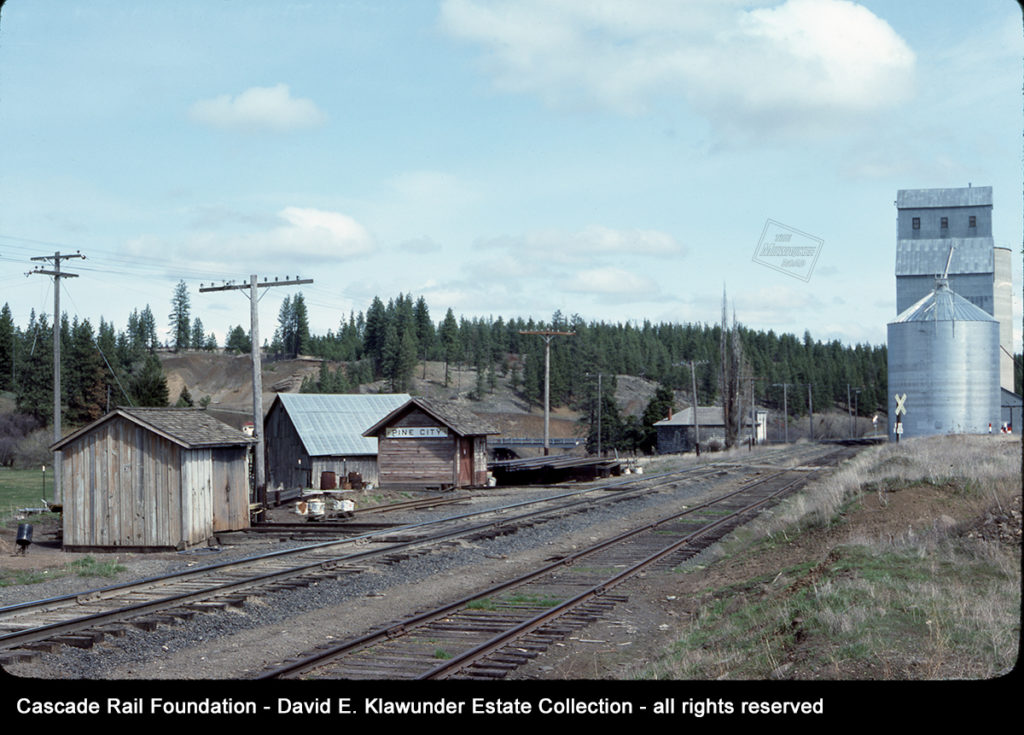 Malden originally started out as the headquarters for the Columbia Division. The division stretched out for 300 miles from Avery to Cle Elum. Because of its minimal grades and long straight stretches through eastern Washington, the Columbia Division was looked upon by management to get late running trains back ‘on time’.

Malden intially had many railroad employees based there. It had a Division Superintendent, Trainmaster, Roadmaster, Chief Train Dispatcher and trick dispatchers. There were also railroad employees staffing a very busy relay office, a roundhouse, a car department, and a group of section men who maintained the track and structures. There were also train and engine crews working both east and west from Malden, a call boy, and workers serving food in the Interstate Beanery.

Since it was ‘home terminal’ for everyone working out of there, Malden didn’t have a bunkhouse like Othello and Cle Elum. Most established crewmen had a house in town, boomer trainmen slept in their caboose or got a room in one of the several hotels in Malden. Hotels had ‘railroad rates’ in those days that were very affordable. 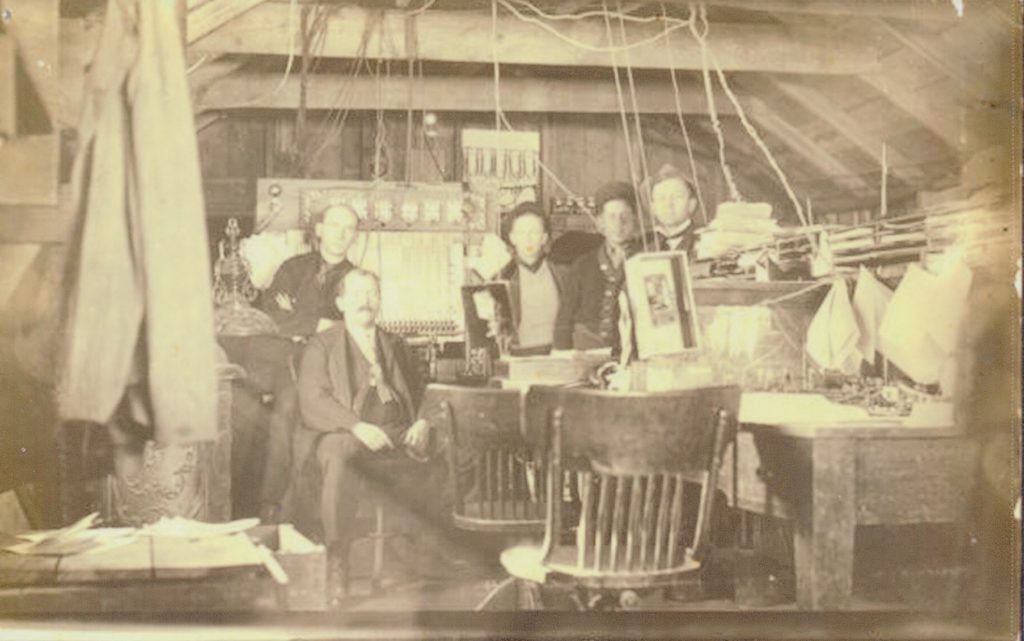 This is an interesting view of the Malden dispatcher’s office, evidently located in the attic of the Malden depot before the headquarters building was constructed in 1911. Note that there are two stoves for heat as it must have been mighty cold up there in the winter and blazing hot during the summer. 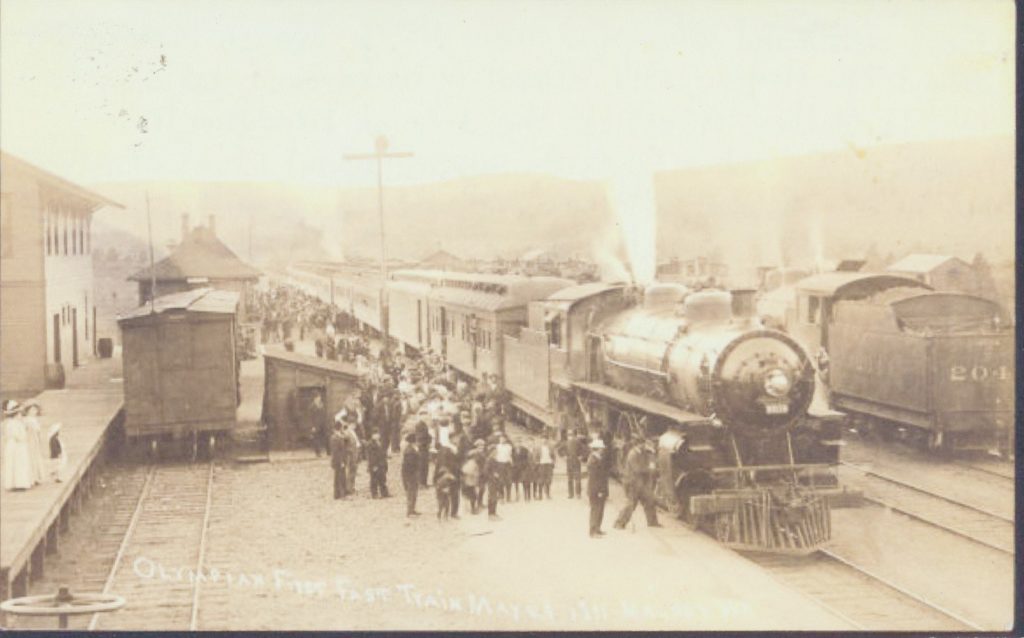 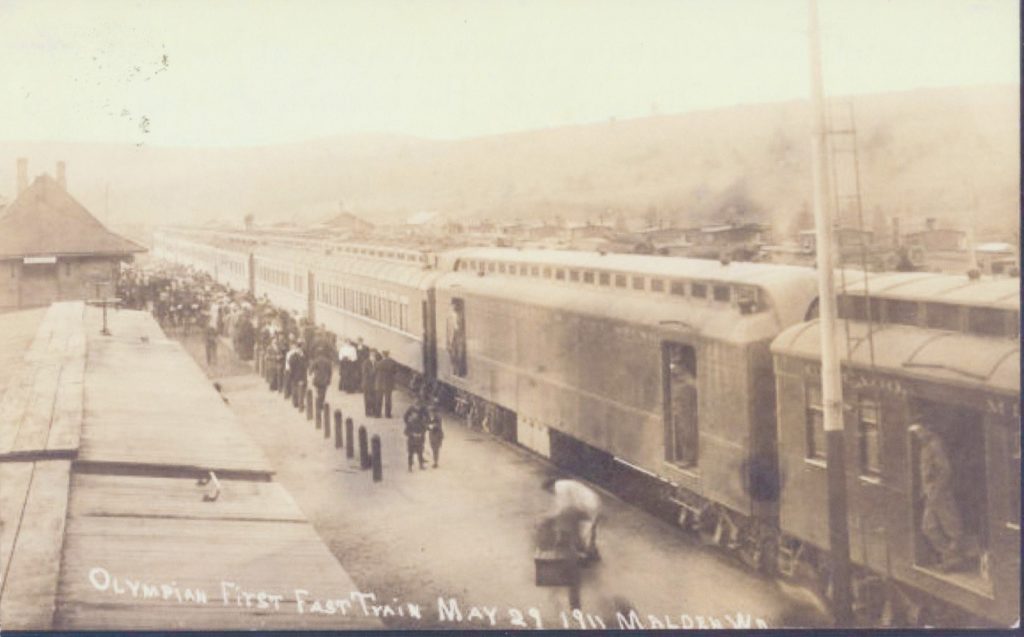 A crowd has gathered at the Malden depot on May 29, 1911 to see the first Olympian passenger train.

Photos courtesy of Allen Miller, from his collection. 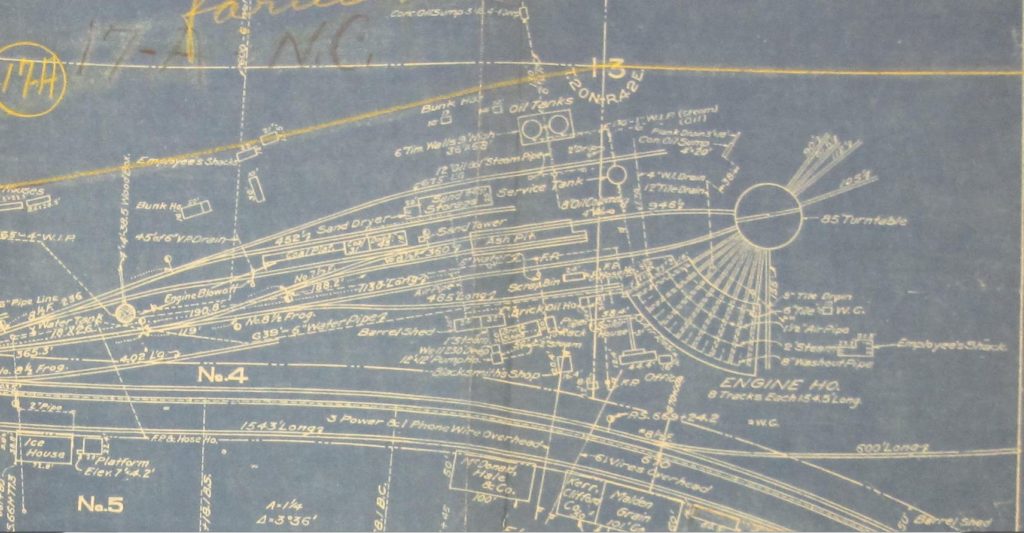 The Malden engine terminal included an 8-stall roundhouse with an 85-foot turntable. Contrary to a popular story, Malden never had the largest turntable in the country or the world – not even close.

Map excerpt courtesy of Allen Miller, from his collection. 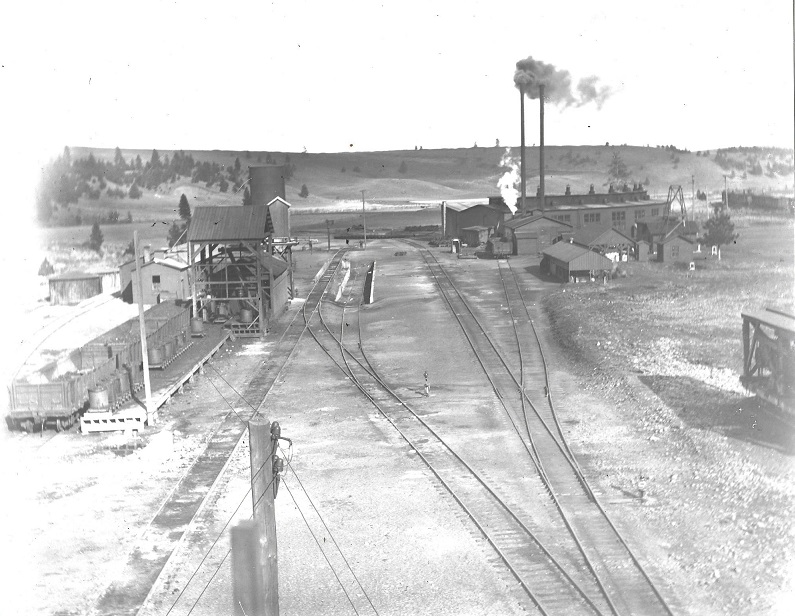 This view looks east to the roundhouse. There are two turntable lead tracks and the spur to the ash pit coming off of the crossover. To the left is the coaling elevator and the coal storage crib. Further to the left s the sand drying house and the sand storage building. The sand tower can be seen beyond the coal bin. Beyond that is the fuel oil tank. 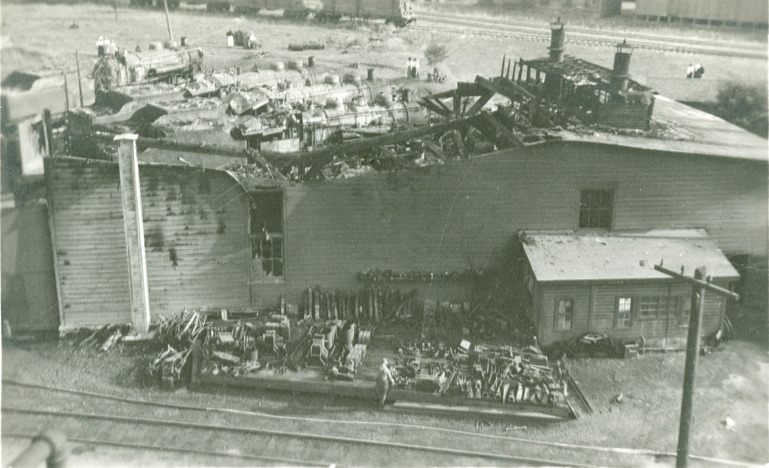 The Malden roundhouse caught fire on September 23,1915. It was rebuilt and reopened on January 20,1916. Run-through operation of steam locomotives was implemented in 1926.  As a result, locomotives were no longer changed at Malden and the roundhouse was not needed. It closed in December of that year. The only mechanical forces remaining were three boiler house foremen. 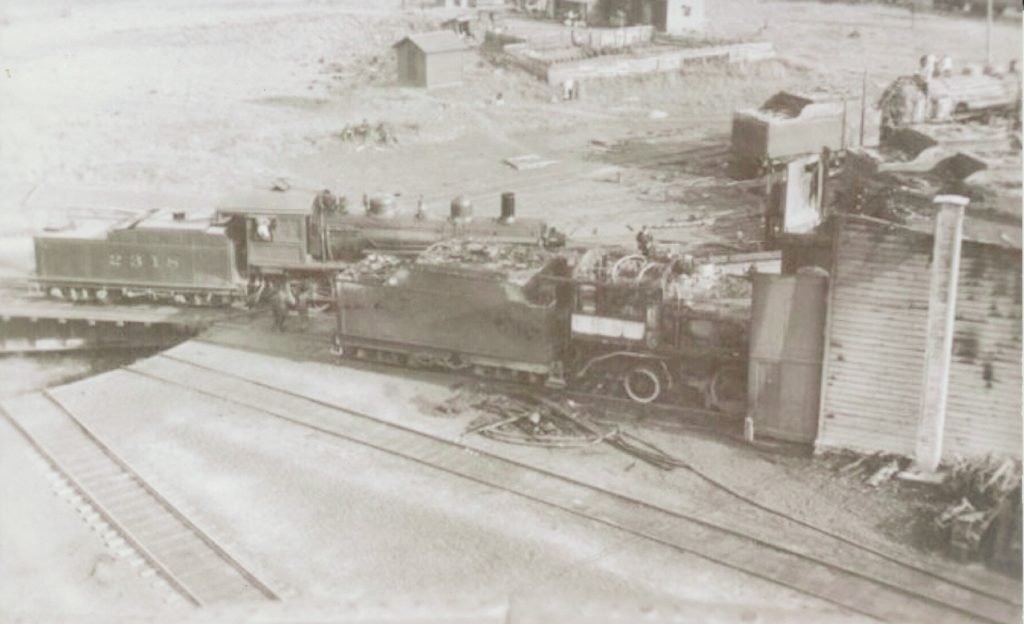 Another view of the Malden roundhouse after the fire of 1915. Unfortunately the fire caught the roundhouse completely full with a locomotive in each of the eight stalls.

Narrative provided by Allen Miller and photo from his collection. 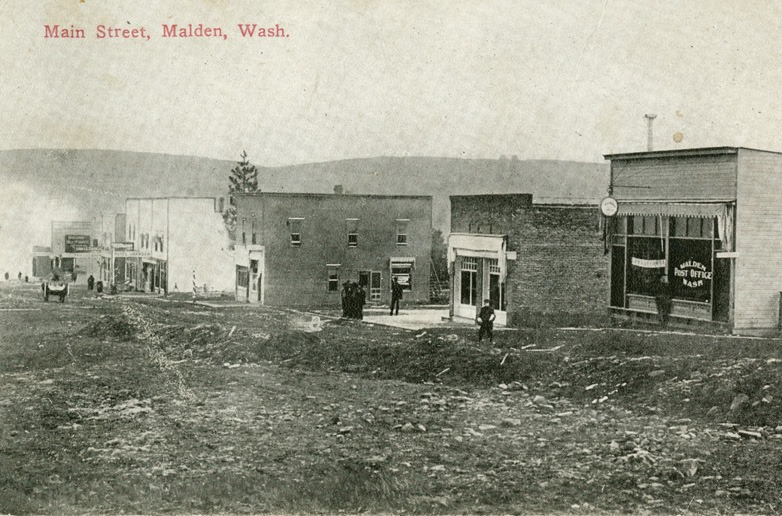 The Town of Malden was established in 1909, with the coming of the railroad. It had a thriving downtown as seen in this view circa 1910. Note that the building to the right is the post office. It has since been relocated and still serves the community today.

In 1928, this building in Malden housed the post office, a pharmacy, and other businesses. The population of Malden was 2,500 people at that time. The post office at the corner is a recognizable landmark of Malden. 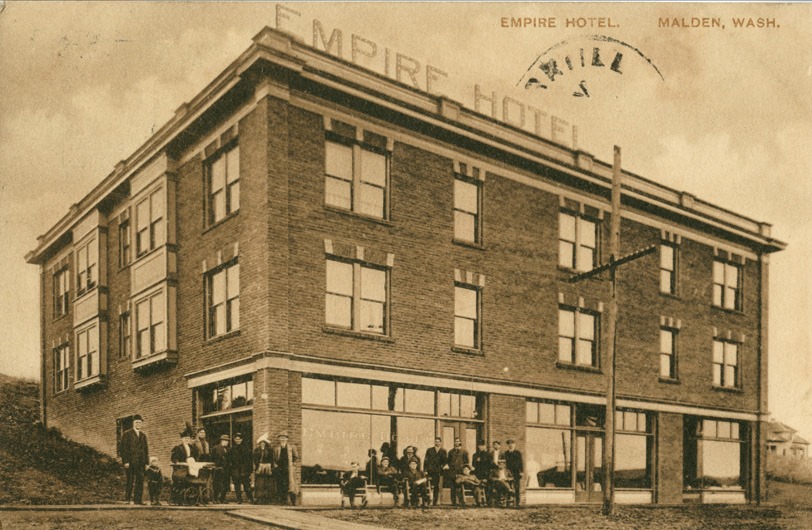 The Empire Hotel, seen here circa 1920, was a magnificent building that gave Malden a cosmopolitan flair.

Malden was once one of the largest and fastest growing communities in the Palouse region thanks to the headquarters for the Columbia Division of the Chicago, Milwaukee and St. Paul Railway. Malden was relatively unsettled before 1909, when the railroad opened. The town continued to grow until the 1920’s when the railroad moved most of its operations out of Malden. 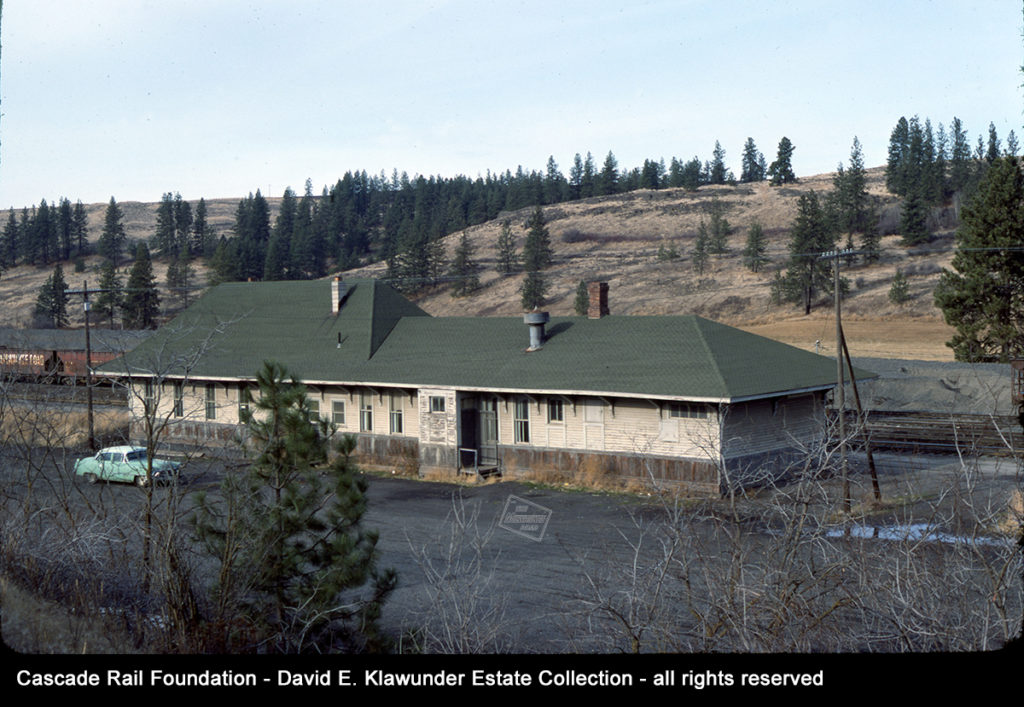 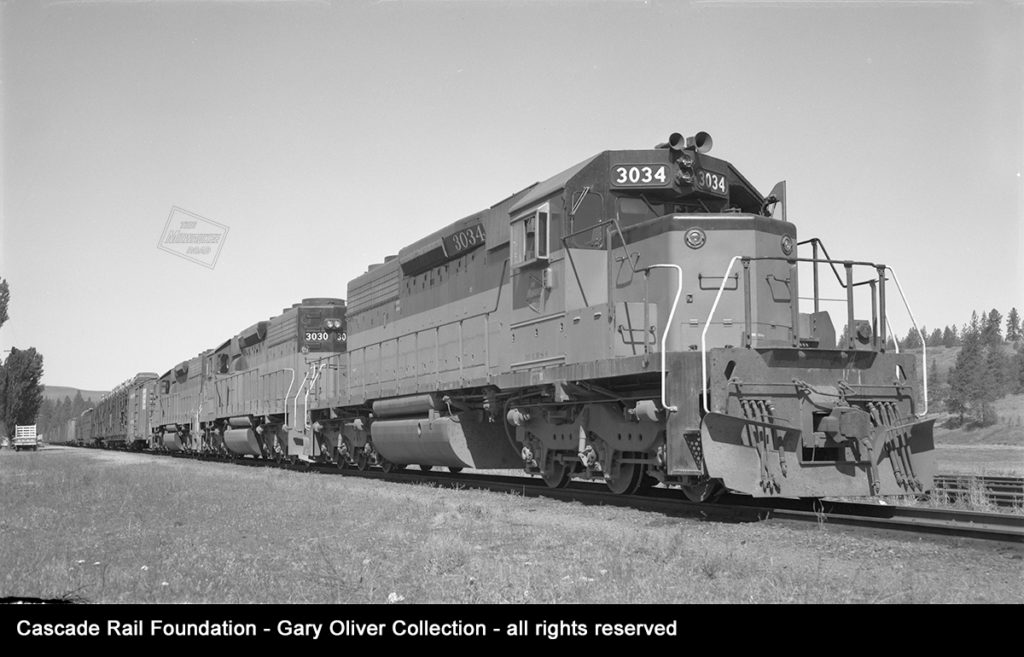 This eastbound freight is ready to depart Malden in May 1973. 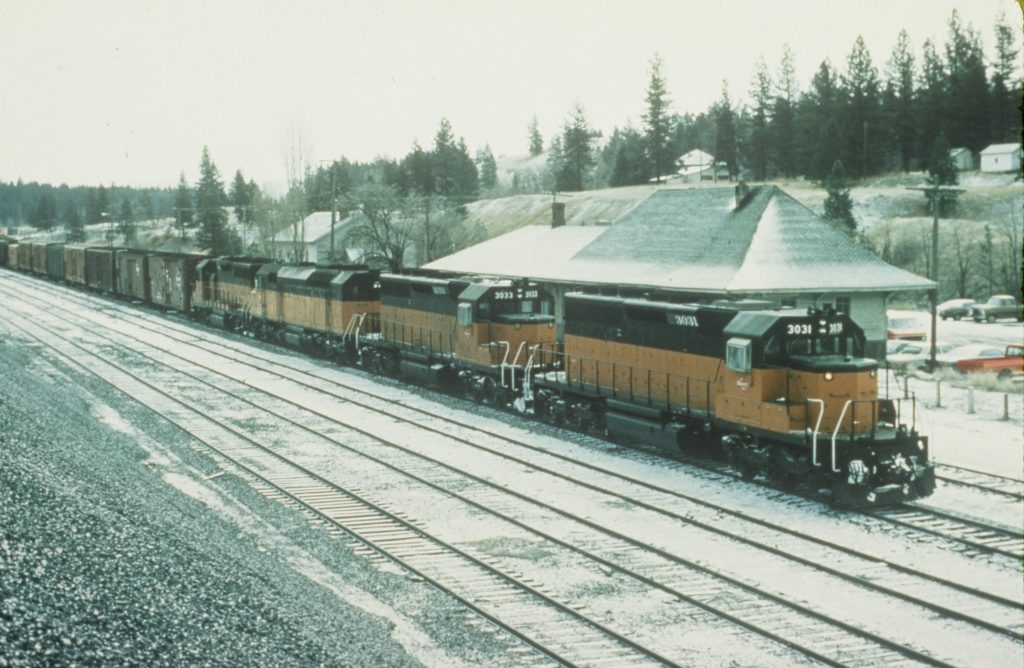 In this view during the winter of 1973-74, a westbound freight stopped at Malden with SD40-2 locomotives in their original 3000 series numbers and also a rare FP-45 in the consist. The town of Malden is uphill and off to the right in this photo. 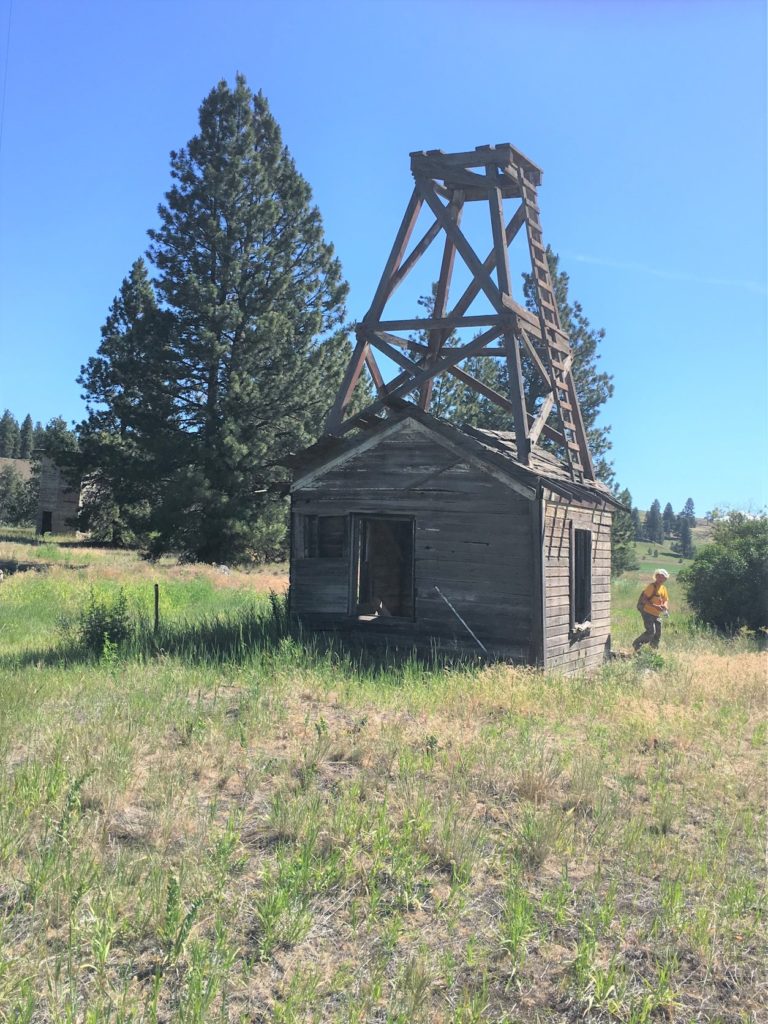 Malden still has a few remnants of its railroad past. This is the pumphouse for the water supply in the rail yard.

The foundations for the 8-stall turntable remain as a silent tribute to the scores of employees that keep steam locomotives serviced and maintained in Malden, as well as the engineers and train crews that made their runs to Othello and Avery, Idaho. The roundhouse was closed ninety years earlier, in December 1926. 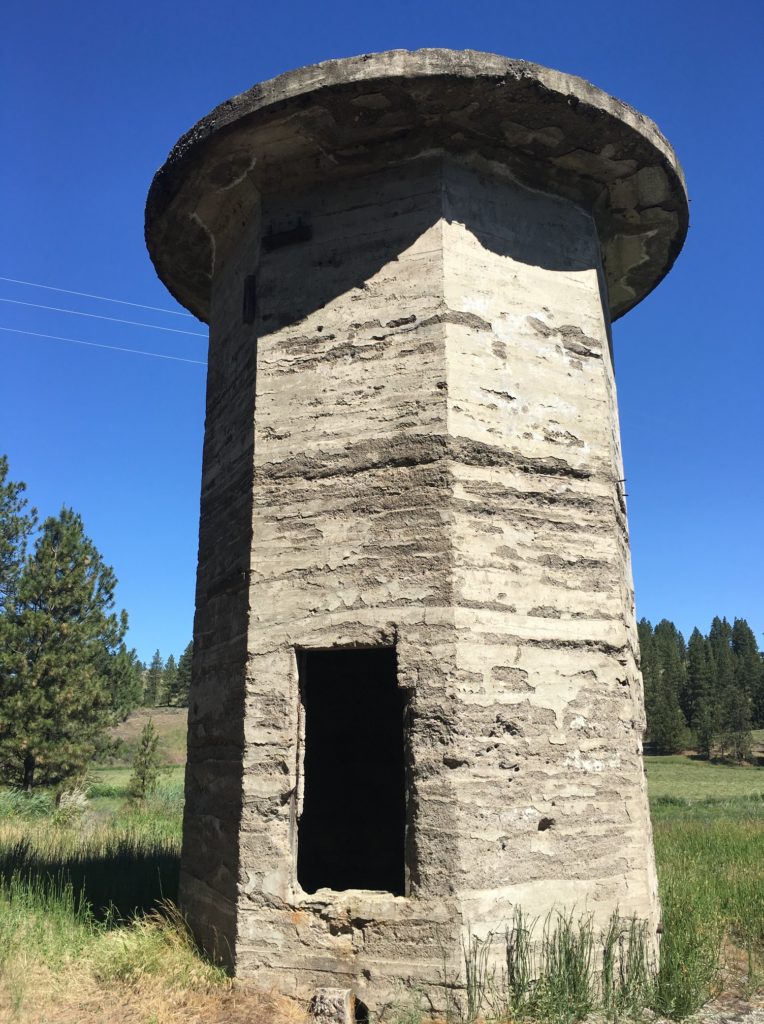 This concrete base was a platform for a tank used to store oil used for fueling steam locomotives.

Tomorrow we continue on to Rosalia, Washington.