Today our virtual tour takes us from Ralston, over the illusive Cow Creek Bridge, and then to the remote but important junction of Marengo. Cow Creek Trestle has been removed, forcing our counterparts from the John Wayne Riders to detour between Ralston and Marengo. They will continue on to Revere, and we will rejoin them tomorrow on their rest day.

Traveling eastbound on an inspection trip, John W. Barriger III captured this view while crossing the Cow Creek Bridge in September 1936. This small watercourse is made dramatic because of the canyon scoured out by the Ice Age Floods. Note the semaphore block signal to the left. The block signal system will end east of Marengo, the next station ahead. Photo from the John W. Barriger III National Railroad Library. 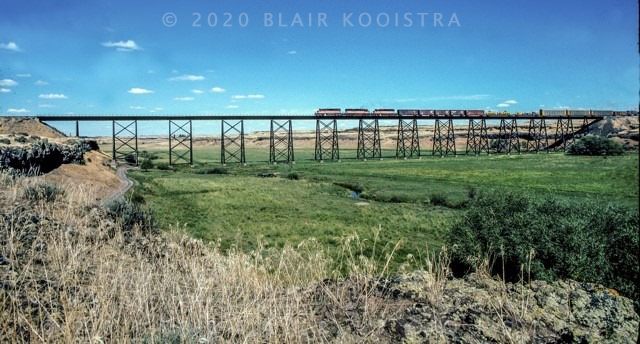 Cow Creek Bridge, EE 164 was a 27-span steel bridge, a 1,401 foot long, 100 foot high monument to Milwaukee Road construction engineering. This bridge was built with a traveler crane, working its way across while moving on rails on top of the bridge by extending its reach out, one span at a time. The watercourse of Cow Creek can be seen in the foreground, overwhelmed by the valley the Ice Age Floods created. Photographs of the Cow Creek Bridge are extremely rare. Blair Kooistra caught this westbound freight on film as it crosses the bridge. 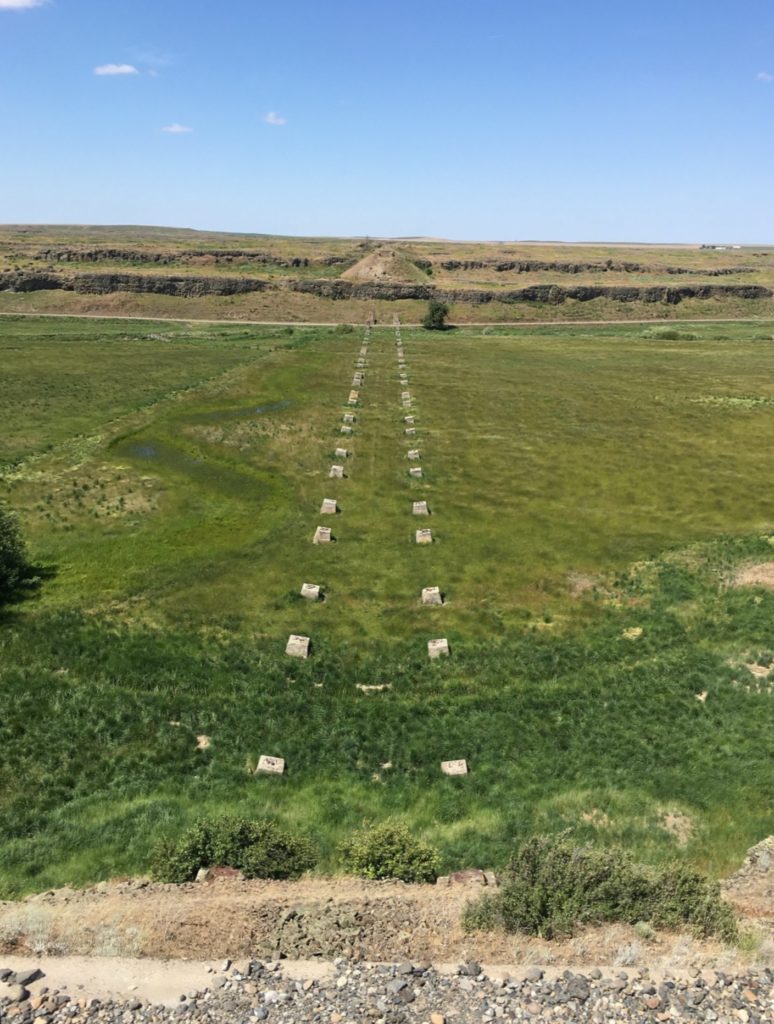 The removal of the Cow Creek Bridge was a major loss. It creates a significant obstacle for people traveling on the Palouse to Cascades Trail and robs future generations of the ability to experience a well-engineered Milwaukee Road bridge. This view is on the east side of the Cow Creek valley, looking towards Ralston. On the bottom of the canyon floor are the concrete foundations for the bridge supports, all that remains of this once magnificent crossing. Photo taken during an out and back side trip from Marengo on the John Wayne Pioneer Wagons & Riders cross-state ride in 2016. Mark Borleske photo. 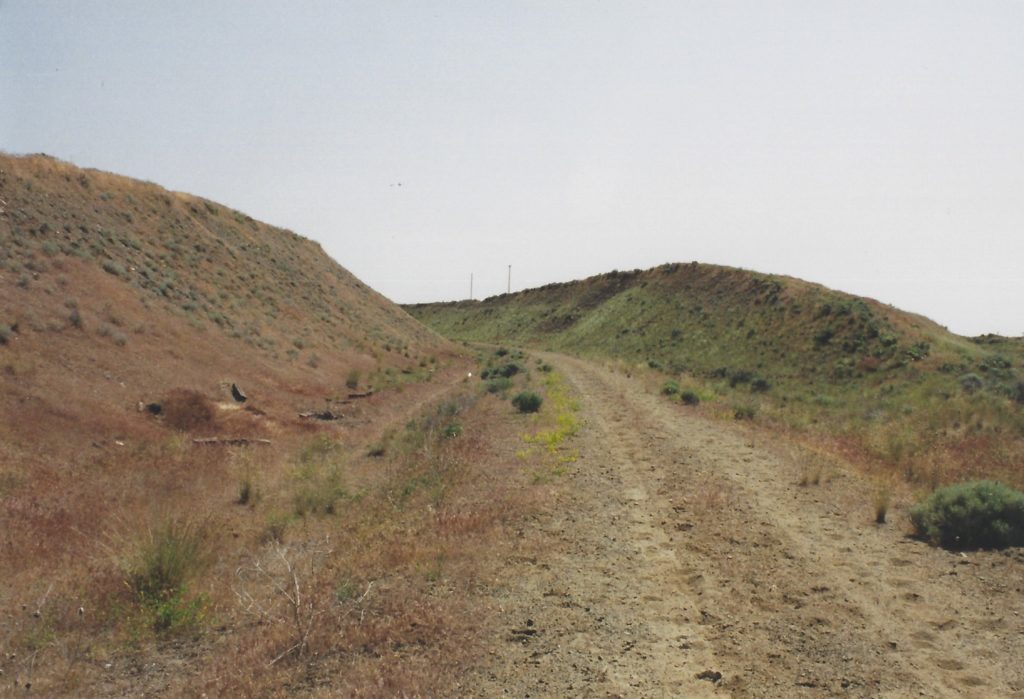 After crossing the Cow Creek Bridge, the right of way curves eastbound towards Marengo. This was where the  the first eastbound Columbian passenger train derailed on May 30, 1911. It was generally believed that engineer E.G. Tallmadge was so excited about being assigned to this brand new all-steel passenger run that he got caught up in the moment and went into the curve at too high a rate of speed. Killed in the wreck were engineer Earl Tallmadge and fireman Harry Schillinberg. The route was realigned through here with a cut and a 3 degree curve pictured here in 2003. This is part of Palouse to Cascades Trail, however it is an out and back from Marengo, abruptly ending at Cow Creek. Mark Borleske photo, caption information from Allen Miller. 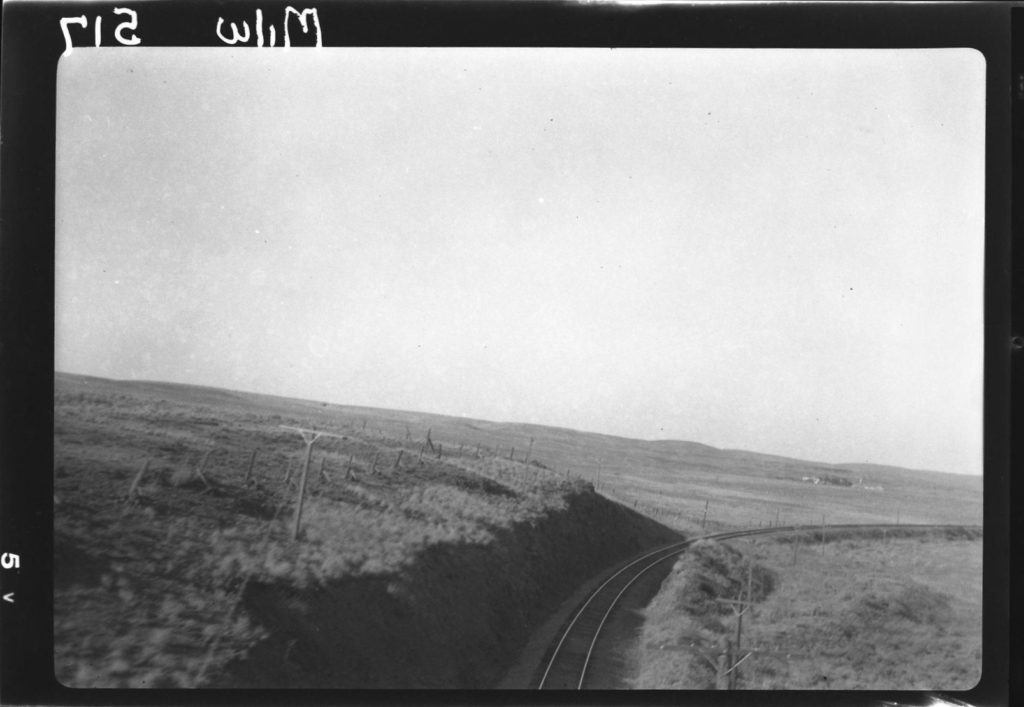 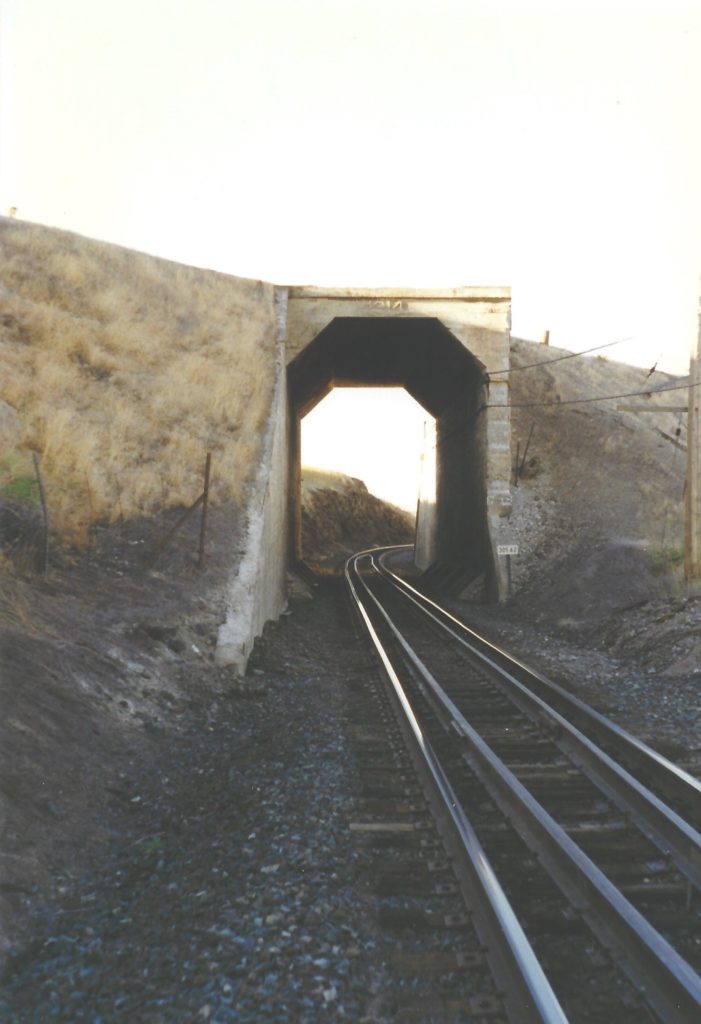 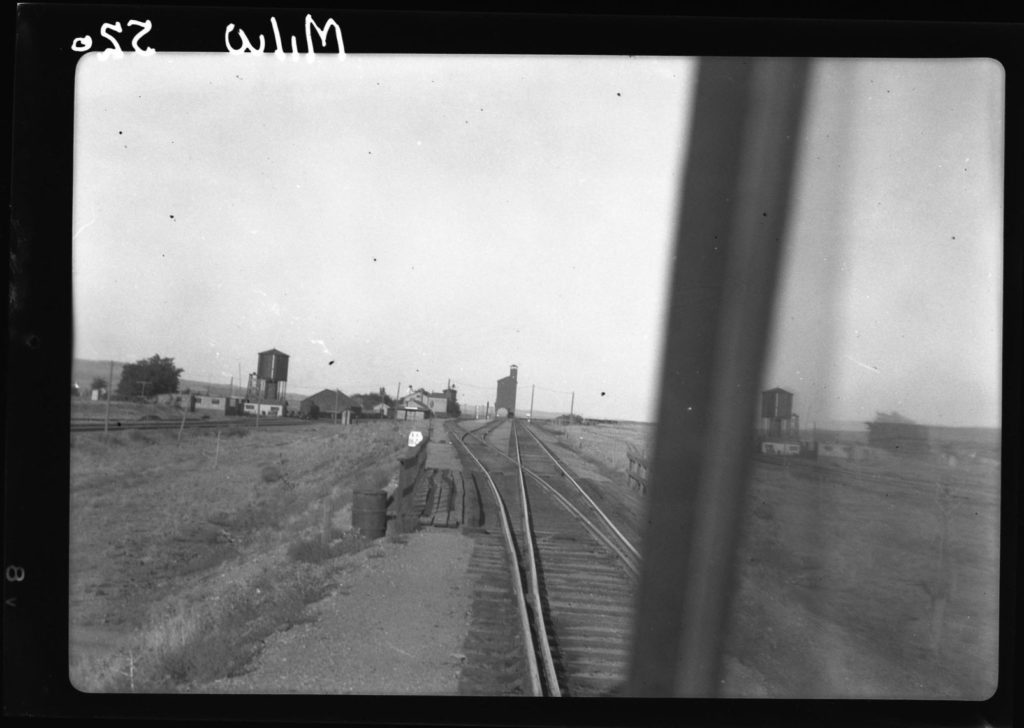 After the 1914 trackage rights into Spokane on the Union Pacific, passenger service via Malden and Rosalia on the Milwaukee Road was local and eventually eliminated. The Marengo to Plummer Junction, Idaho route via Malden would be referred to as “the freight line”. Also, there were no block signals between Marengo and Plummer Junction – this was considered “dark territory”.

The Milwaukee Road is at the upper elevation and the Union Pacific to the left at the lower grade in this September 1936 photo by John Barriger III. Photo from the John W. Barriger III National Railroad Library. 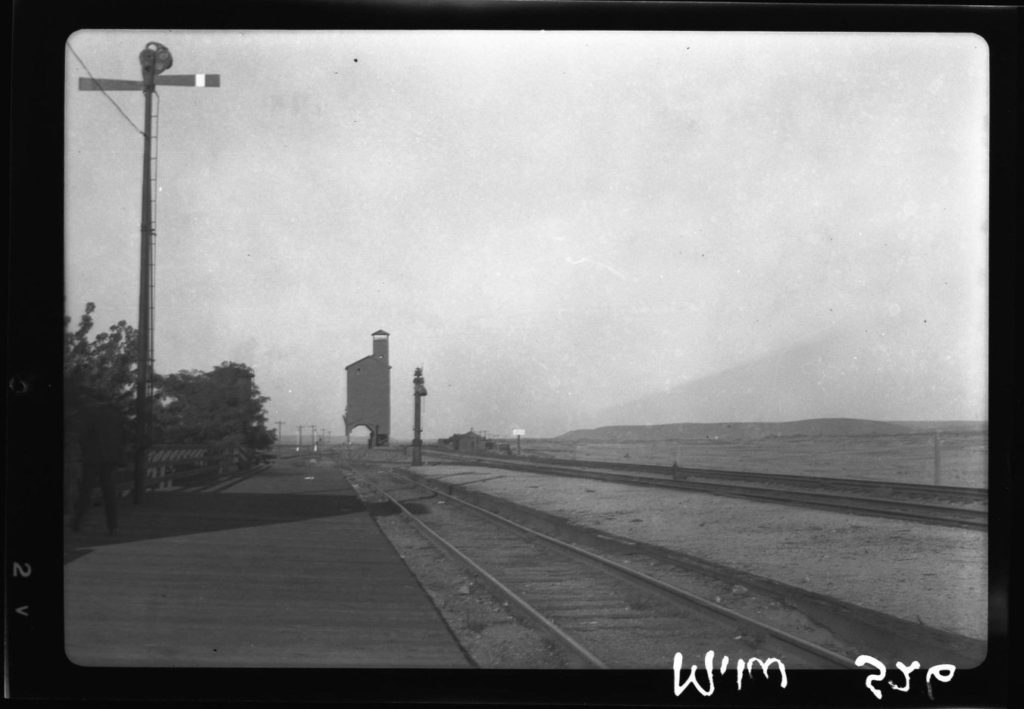 John Barriger III took this photo of Marengo in September 1936 from the Milwaukee Road side of the station platform, looking east toward the coaling tower. The coaling tower was built in February 1918 because there was a shortage of oil, probably a result of WWI. The Milwaukee converted a fleet of oil burning steam locomotives back to coal to operate through the Gap between the electrified sections that ended at Othello and Avery, ID.  That’s a water spout seen just to right of the coaling tower. Photo from the John W. Barriger III National Railroad Library. Caption information from Allen Miller. 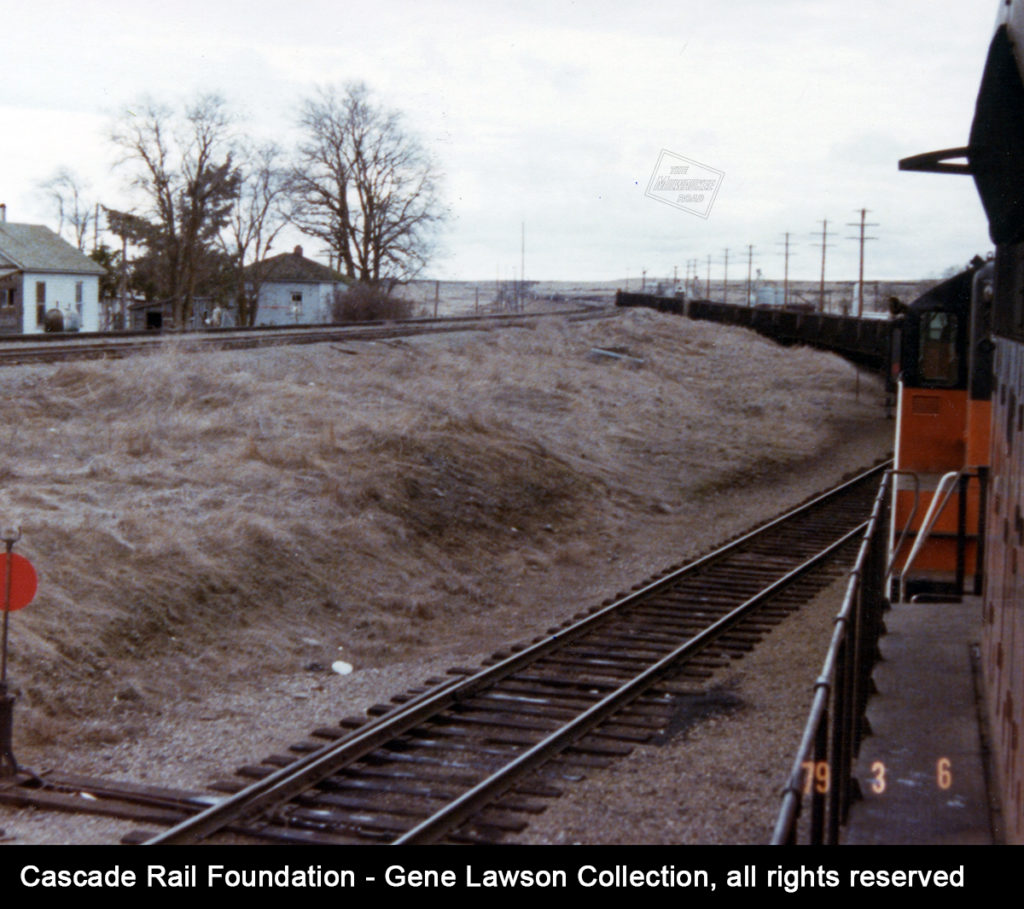 This is probably a Marengo Turn, setting out empty hoppers on the Union Pacific interchange track. The hoppers were used to haul coal loads from Wattis, Utah to the U&I plant at Scalley, WA. This was an unusually large number of hoppers moving at once. Looking east, the Union Pacific section houses are on the left. Photo by Milwaukee Road engineer Gene Lawson, circa 1979. 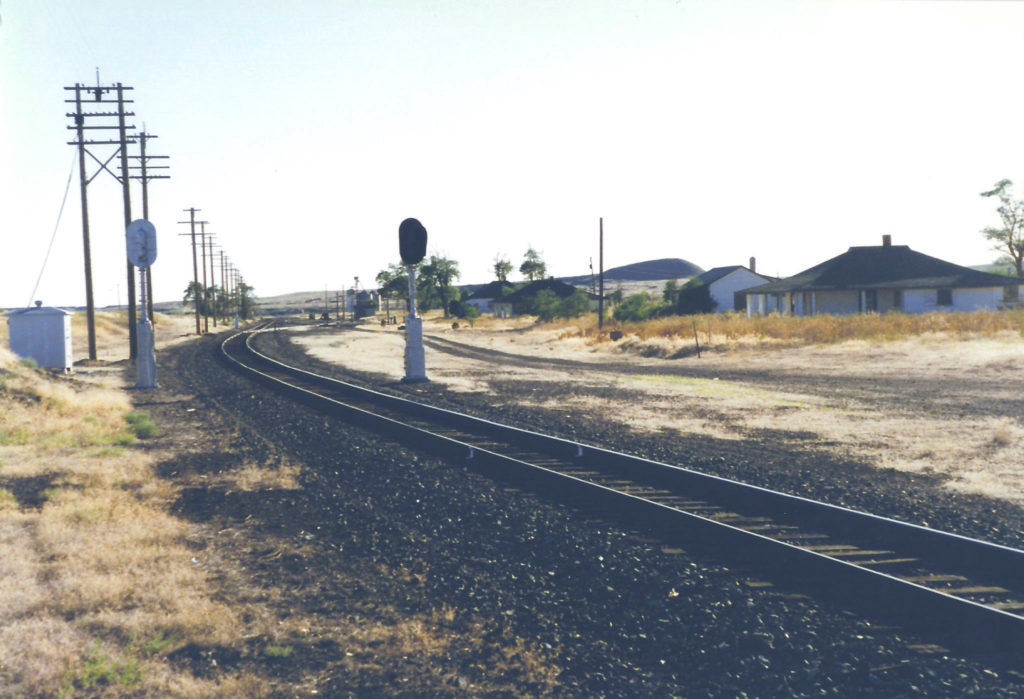 This is a view of the Union Pacific looking westbound in 2003, with vacant section houses to the right. The Milwaukee Road grade is up to the left, slightly elevated. The Union Pacific/Milwaukee interchange pictured above by Gene Lawson is behind the photographer. The section houses are a common reference point for both photographs. Mark Borleske photo 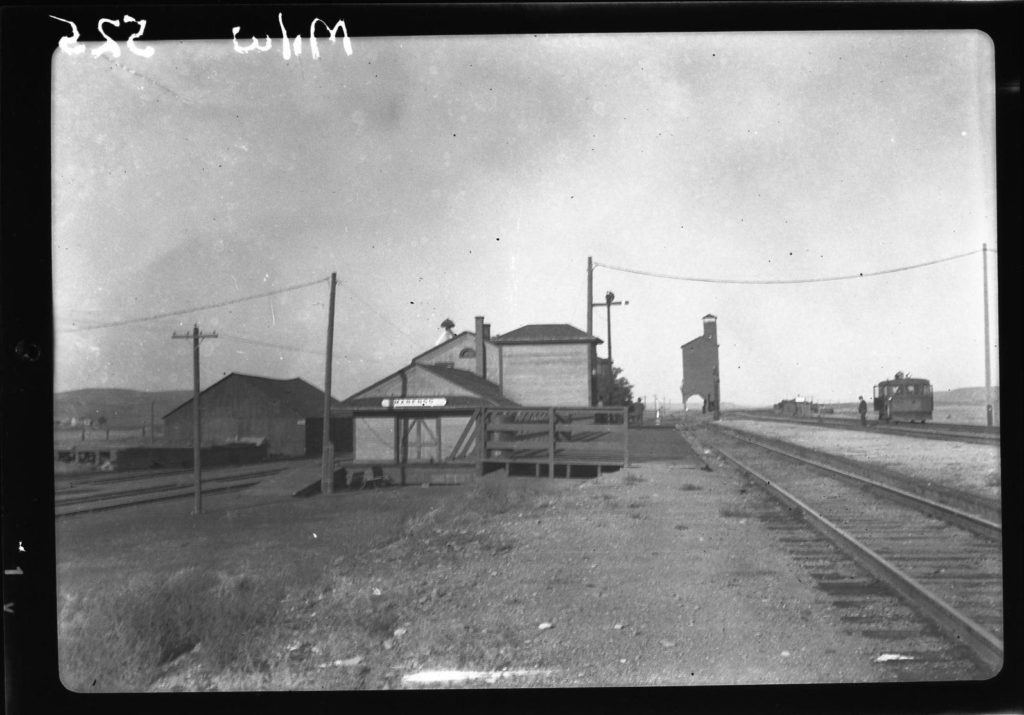 A closer look at the joint agency depot at Marengo, looking east by John Barriger III in September 1936. The Milwaukee Road is to the right and the Union Pacific is below to the left. Note on the right is the rail inspection vehicle used by John Barriger III on his inspection tour across the Milwaukee Road, as seen in many photographs in this series. 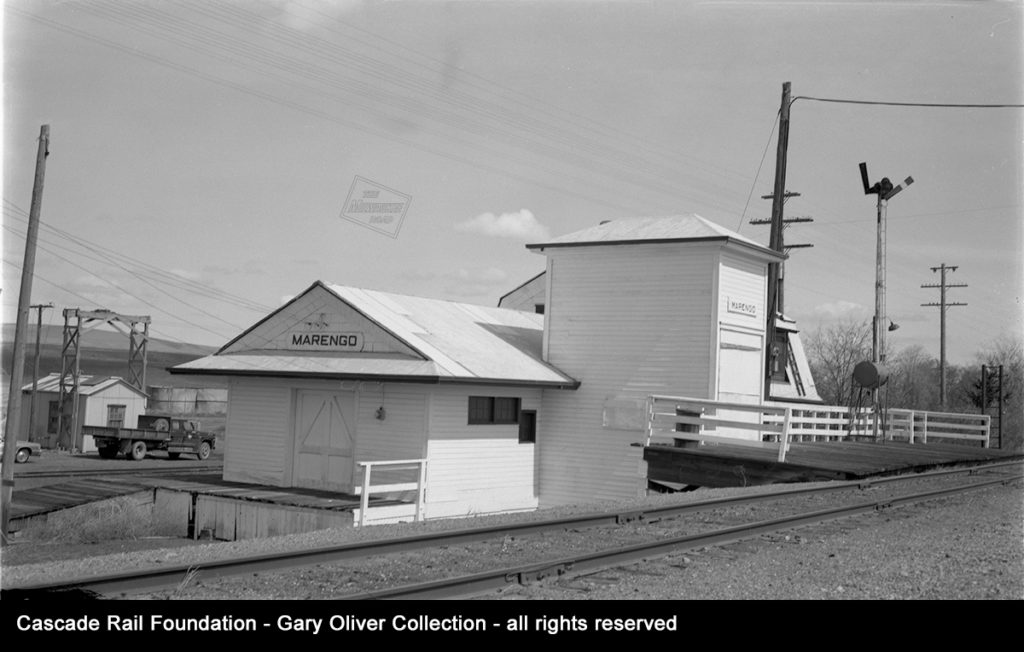 Here is the joint Union Pacific/Milwaukee Road agency at Marengo in April 1976.. This was staffed by a Union Pacific agent/operator. The tall tower is an elevator, used to transfer baggage, express and material from the Milwaukee platform, down to the lower UP level. The building had Union Pacific style station signs on each end, as well as a Milwaukee Road station sign on the front of the elevator, facing the Milwaukee track. Photo probably taken by Stan Styles, in the Cascade Rail Foundation Gary Oliver collection. 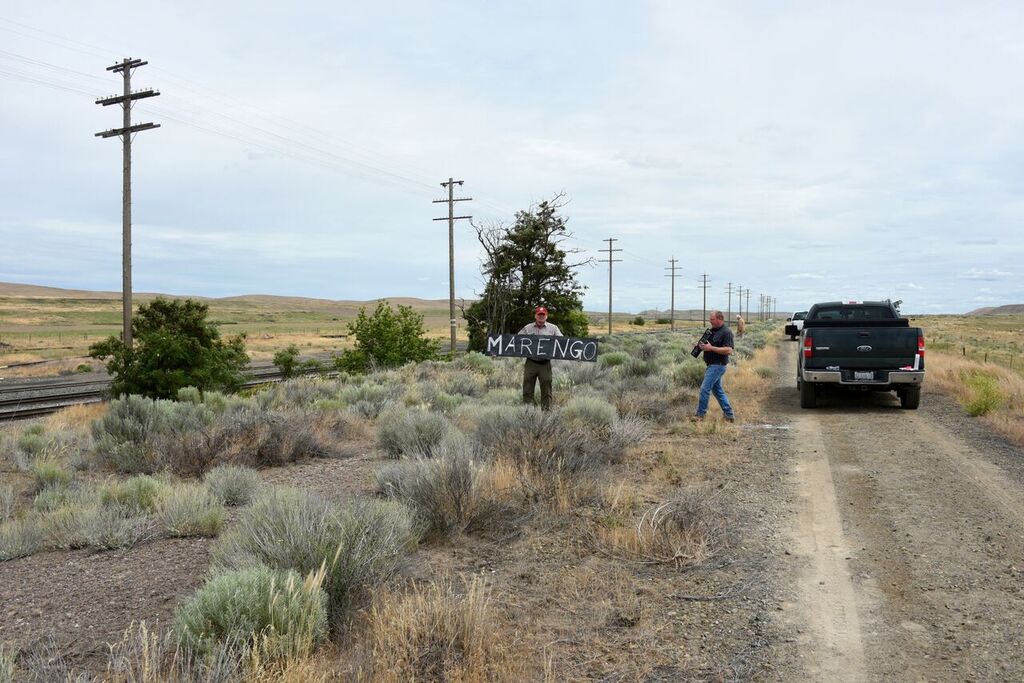 We’re at Marengo during a June 2018 site visit, documenting and locating the site of the depot as a part of the station sign project. Left to right, Mark Borleske, with sign, Preston Cliburn and Dan Brady in the distance. Dan Bolyard was the official photographer

Tomorrow : Marengo to Revere, more of the channeled scablands and the lands of the Ice Age Floods.