Today our virtual journey through space and time takes us over Boylston Hill and down to the Columbia River at Beverly Junction. 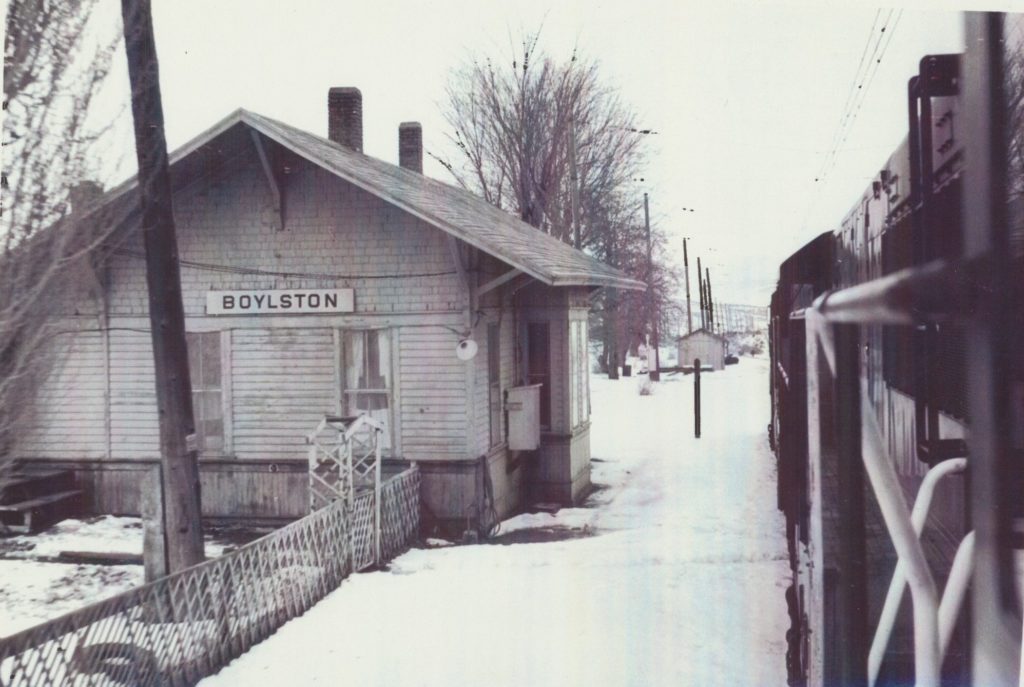 The Boylston depot was a remote outpost near the summit of the Saddle Mountains. This view is looking west from a passing train towards Renslow. This photo taken on January 13, 1966 by engineer Pat Chester. On this day Pat ran a light engine movement from Othello with recently built General Electric U-25B locomotives (384, 391, 388, and 385) to Cle Elum to pick up 261’s train. The 388 would be renumbered 5057 and be purchased by Cascade Rail Foundation many years later for eventual display at the South Cle Elum Rail Yard.  Photo and caption information courtesy of Allen Miller.

Eastbound train 200 is climbing up the grade from Kittitas and is about to enter the Boylston Tunnel, a 1,973 foot long bore, on September 12, 1979. The trees to the left mark the former location of the Boylston depot. Rob Leachman photo, all rights reserved, used by permission.

Boylston Hill in the Saddle Mountains was the Milwaukee Road’s steepest mainline grade at 2.2%. There were a number of runaways on both sides of the hill, sometimes with tragic results. In this photo, a contractor’s work train got away from the crew four miles from Rye and demolished the Rye depot and killed 5 persons, December 29, 1910. The depot at Rye had a husband and wife telegraph team. Bertrand Bradford Ridgley worked the day shift and his wife, Nellie, worked the night shift. The Ridgley’s had several children and they all lived in that depot. Fortunately, when the work train ran away in December 1910, the Ridgley’s were on vacation at relatives in Elkhart, Indiana. The relief man and his family were sleeping in the spare room in the back of the depot and escaped without a scratch. CRF Ruthie and Frank Norton collection, photographer unknown. Caption information provided by Allen Miller.

The electric substation at Doris was a remote and lonely spot. As the daughter of substation operator Hutchinson,a very young Gladys Para would carry a tray of food her mother prepared from home (a bungalow next door) and bring it to the substation office where she would enjoy lunch with her father. This was a highlight of the day for both of them. Gladys Para revisited Doris decades later, riding in a horse-drawn wagon during a John Wayne Pioneer Wagons and Riders cross state ride. (Gladys Para as told to Mark Borleske). Photograph from the collection of Allen Miller. 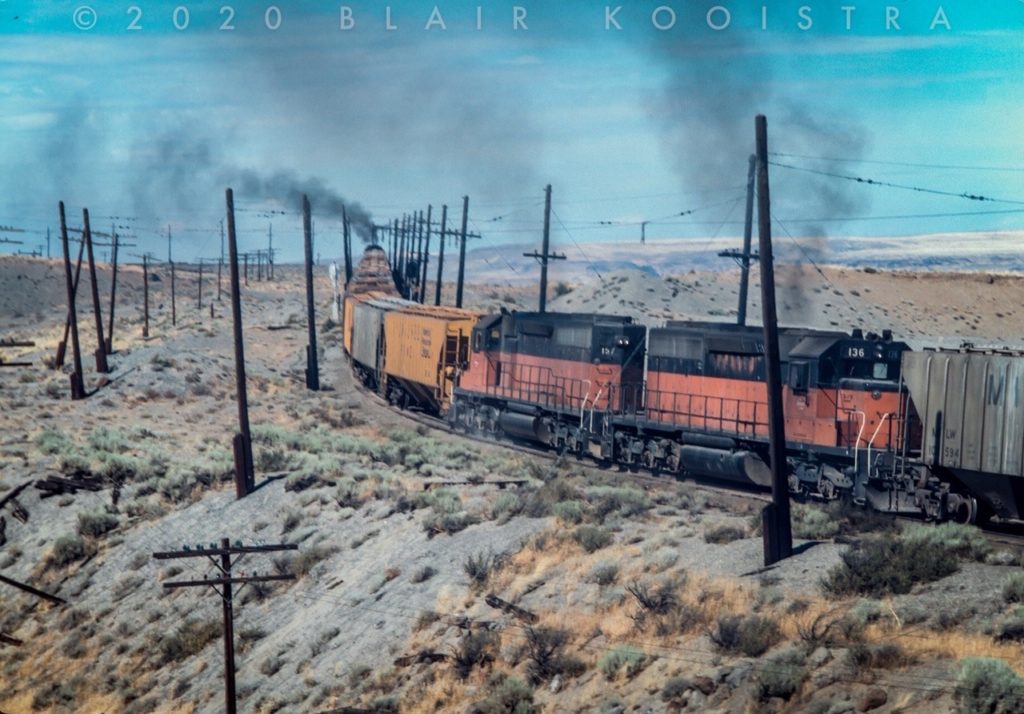 Westbound train #205 climbs the Saddle Mountains past the abandoned gravel pit at Cohasset on August 28, 1978. Two SD40-2’s and an SD45 are up front; 32 cars back is the Beverly Helper, and there’s another 37 cars to the rear. Helpers on Beverly Hill largely died with the end of the Electric era; a severe power shortage because of a high bad-order ratio of power in 1977-78 brought the helpers back on heavy scheduled freights, with heavy-tonnage dead freights often called as “Kittitas doublers” to eliminate the need for helpers over the Saddle Mountains. Photo by Blair Kooistra, used with permission.

Milwaukee Road engineer Richard ‘RJ’ Jones snaps a photo looking back at his train as it crosses the Columbia River and rolls through Beverly Junction as it heads west in this undated photo.

Tomorrow’s journey will take us across the Columbia River on the Beverly Bridge, into Beverly, along Crab Creek and the Saddle Mountains to Smyrna and Taunton.