Our Milwaukee Road virtual tour continues today through the channeled scablands, a land of volcanic rock  scoured out by Ice Age Floods. Castleton, with its towering rock formation, is a memorable landmark. The bridge over Rock Creek, an outlet from Rock Lake, presents a view of a waterfall. Finally we reach the historic community of Ewan and the west end of Rock Lake, discovering the rich history of a tiny community that was there before the railroad arrived. 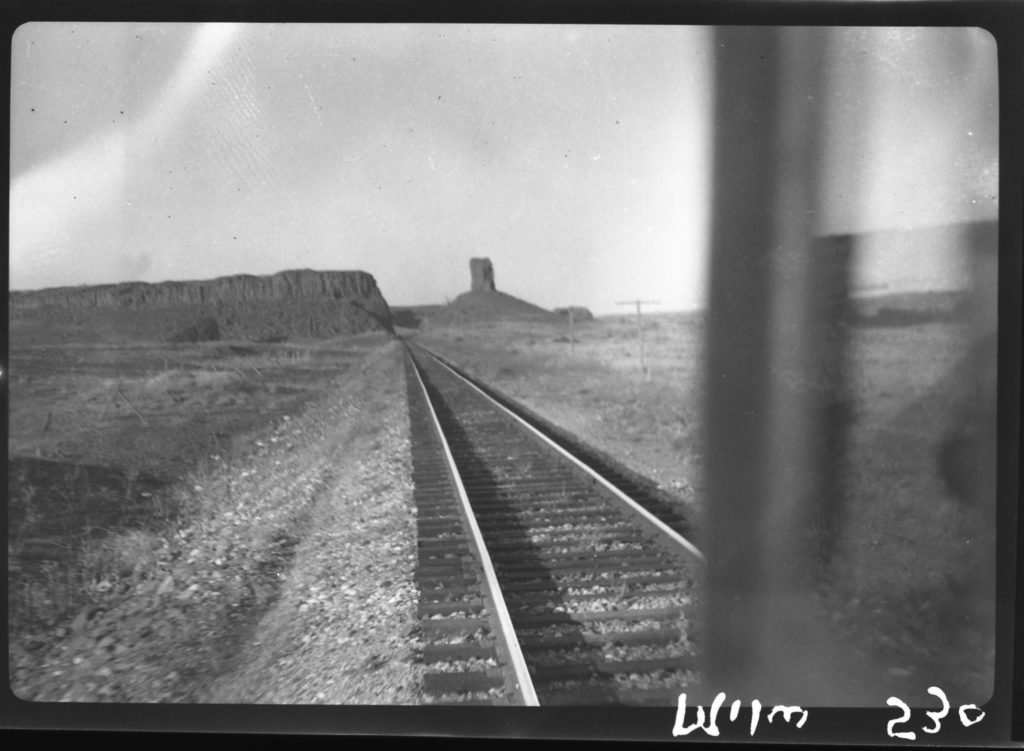 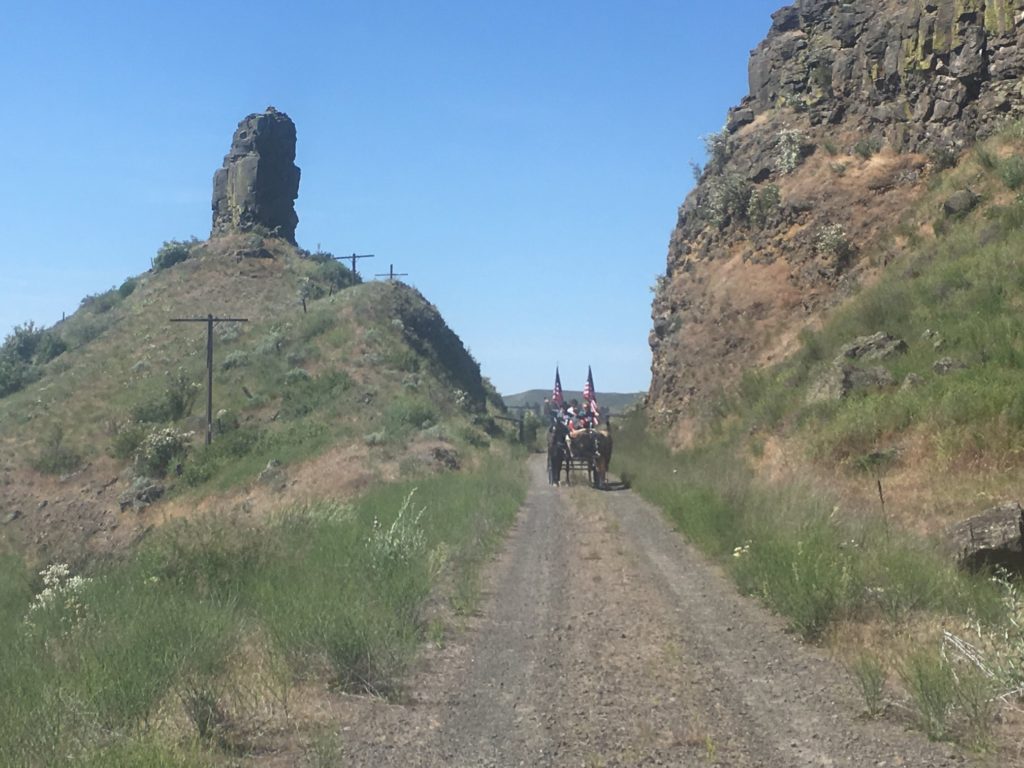 The rock formation at Castleton is distinctive and unique, showing the clear interaction of volcanic rock and the effects of Ice Age Floods on the landscape. Mark Borleske photograph taken during the John Wayne Pioneer Wagons and Riders 2016 cross-state ride. 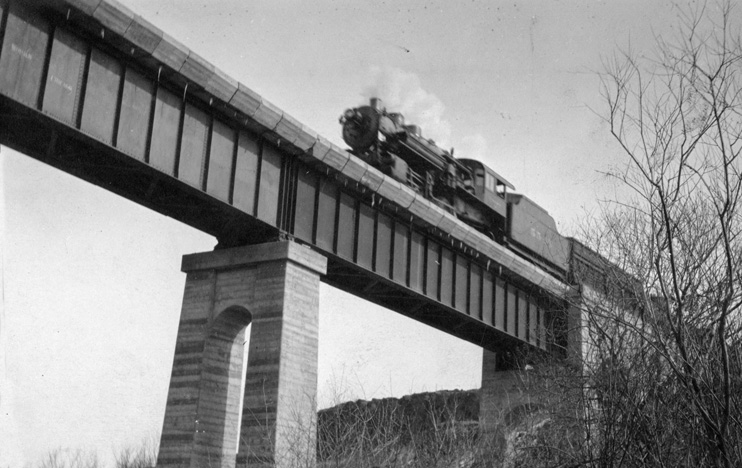 In this view, we’re looking up at a train crossing Rock Creek Bridge in the 1920s. The railroad designated the 160-foot two-span girder bridge as EE-144.  Rock Creek is an outlet from Rock Lake. 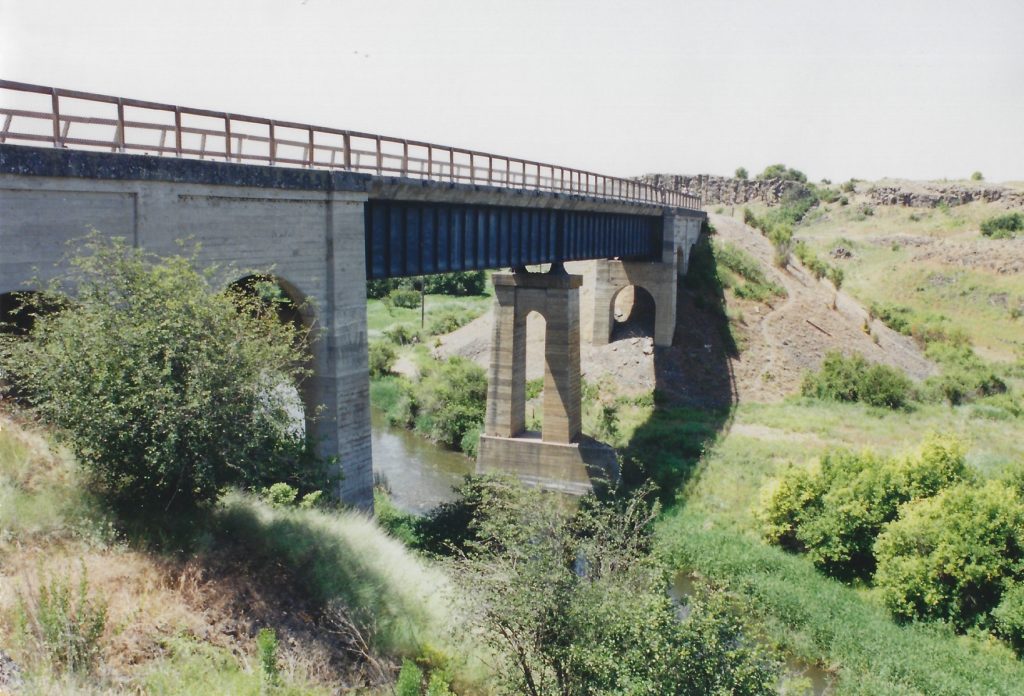 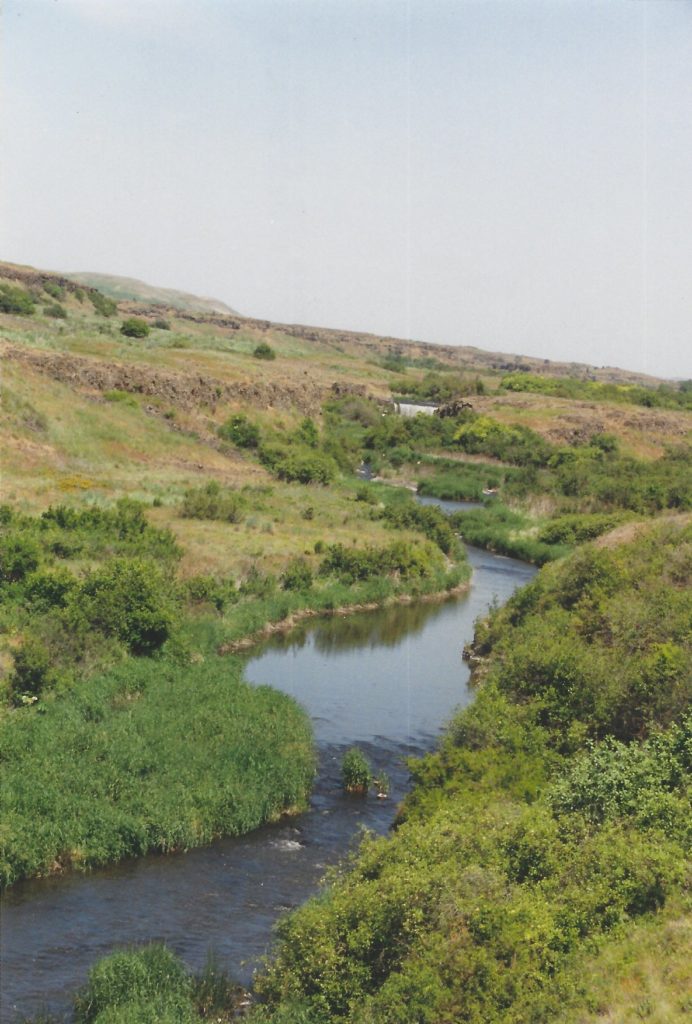 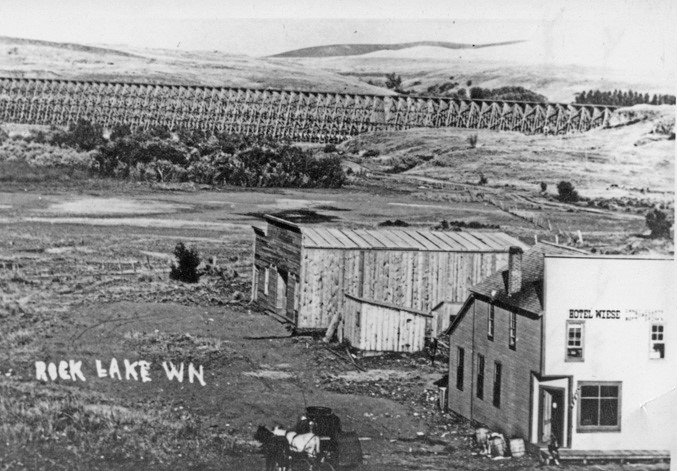 In this view of Rock Lake City, you can see bridge EE-142 in the background. This trestle was located on a portion of line that was relocated. There was a siding established here early, originally spelled “Ewings Siding” in employee timetables as early as 1910. By May 1911 the name was revised to “Ewan’s Siding”. The location of Rock Lake City was abandoned after a 1910 flood. With a line change between milepost 1901 and milepost 1902, a new station of “Ewan” was established 0.4 miles east of the old Ewan’s Siding location in September 1911. 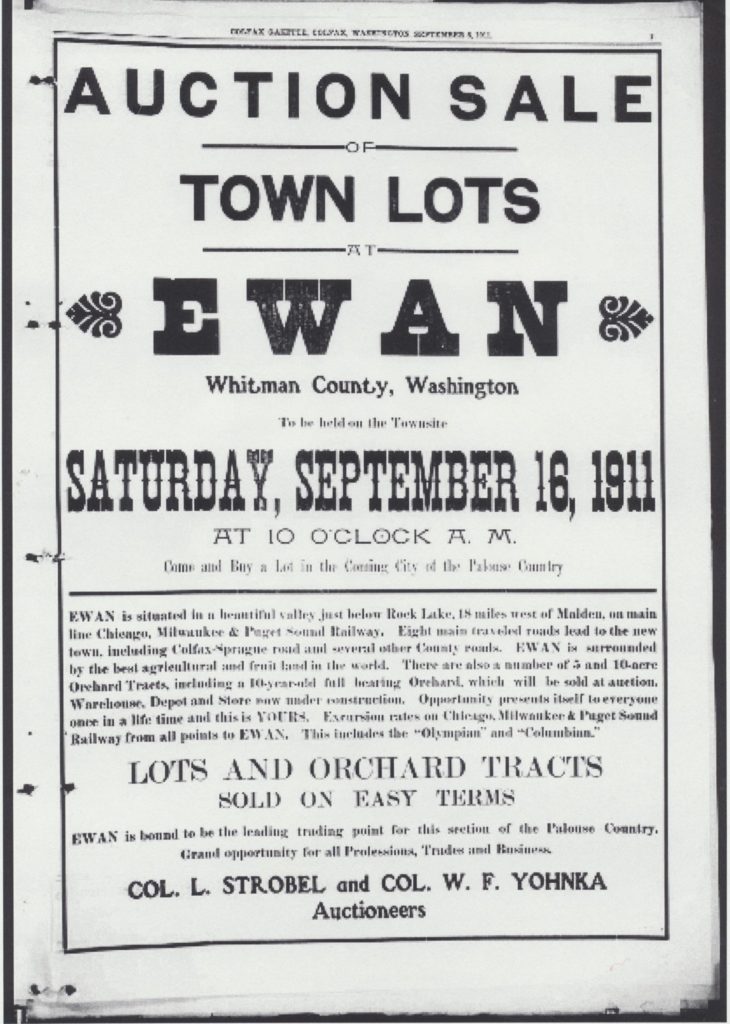 Ewan was about one mile away and closer to the railroad than Rock Lake City. Some of the Rock Lake buildings were moved on skids to the new Ewan community.  This advertisement from the September 8, 1911 edition of the Colfax Gazette newspaper promotes the sale of town and orchard lots in the new community. 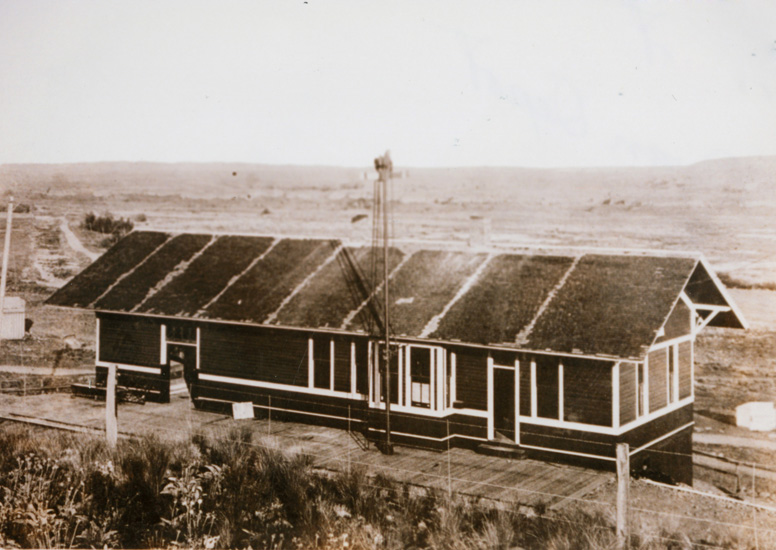 The Ewan depot was a 24’x74′ “Class A” design and was constructed in October 1911. The original agent here was L. G. Graham. He left in March 1913 to become the second agent at Neppel (Moses Lake) replacing Henry L. Johnsrud. The next agent at Ewan was M. J. Campbell. This depot remained open until the 1950’s. 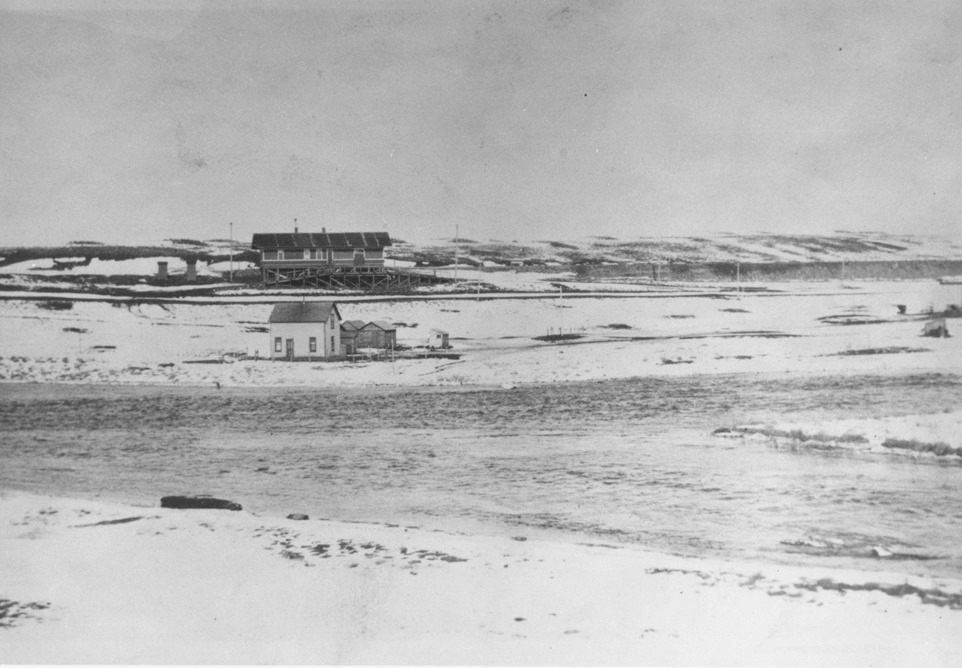 In this photo, the original grade of  the railroad can be seen between the house in the foreground and the rear of the depot in the distance. This photo was taken a few years after the depot’s 1911 construction as evidenced by the staining on the roof. It looks like a galvanized cap was used along the peak of the roof. 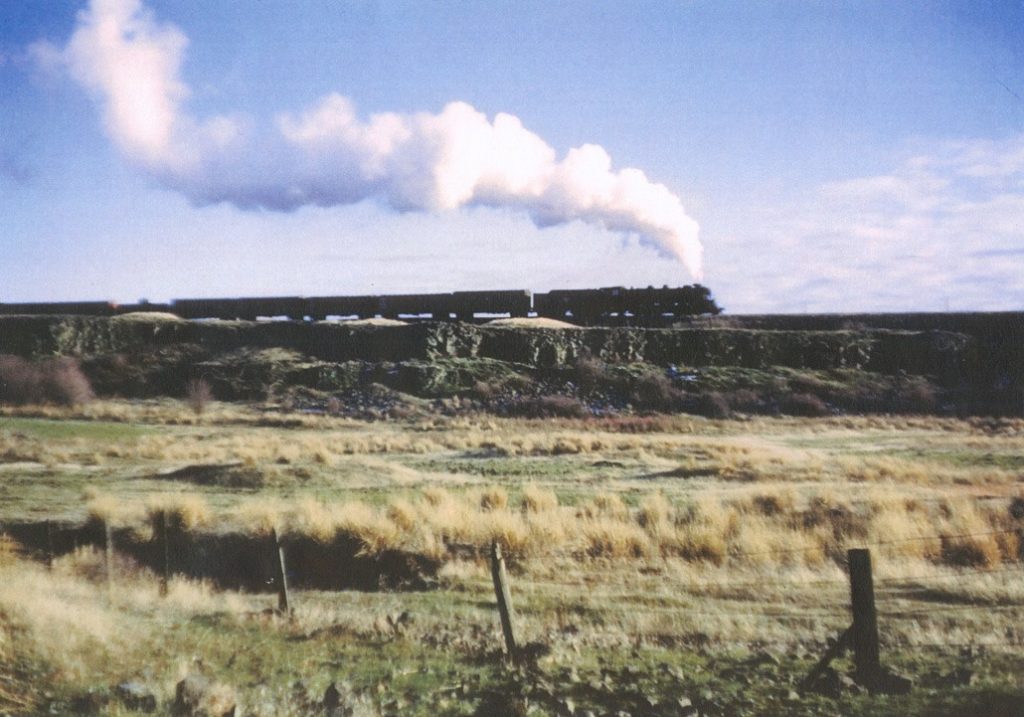 This photo of westbound train #263 was taken in 1950 near Rock Lake, Washington. The location was one mile east of Ewan. 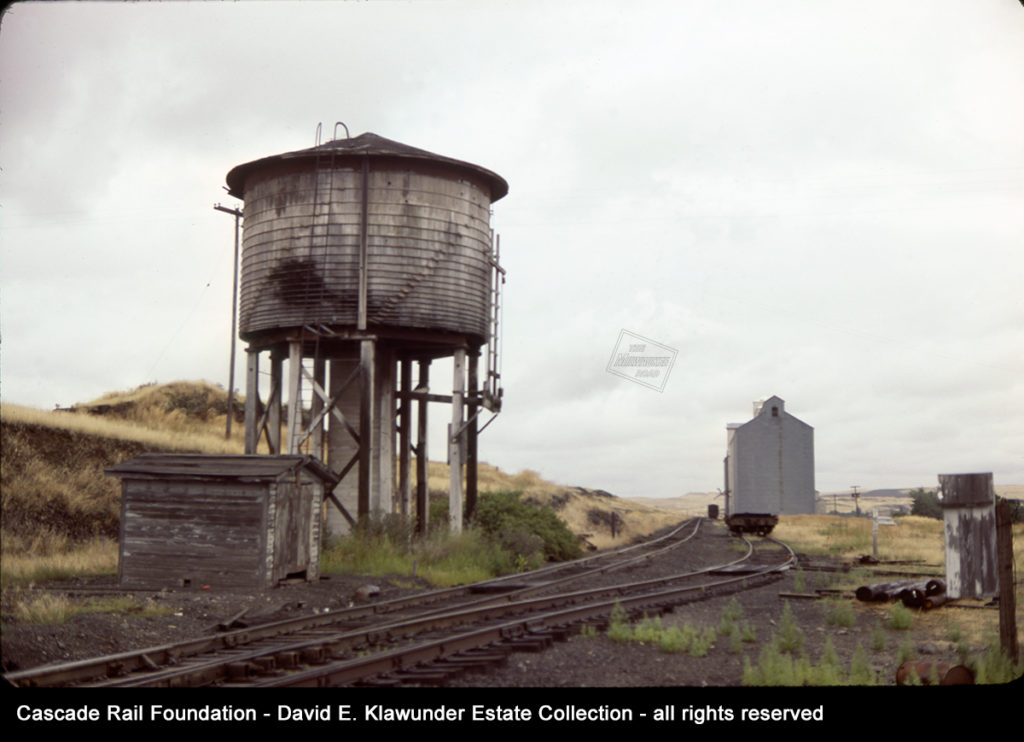 The water tank at Ewan lasted until the shutdown in 1980, mainly because it was the source of drinking water for the town of Ewan. In the early 1980’s, two of the supports had rotted out and were being held together with thick planks scabbed onto the sides. Not long afterwards a strong wind blew the tank over. The Chicago-Milwaukee Corp. was then tasked with building a pipeline to bring water to the town. This view of Ewan, looking east, shows the water tank on August 20, 1978. 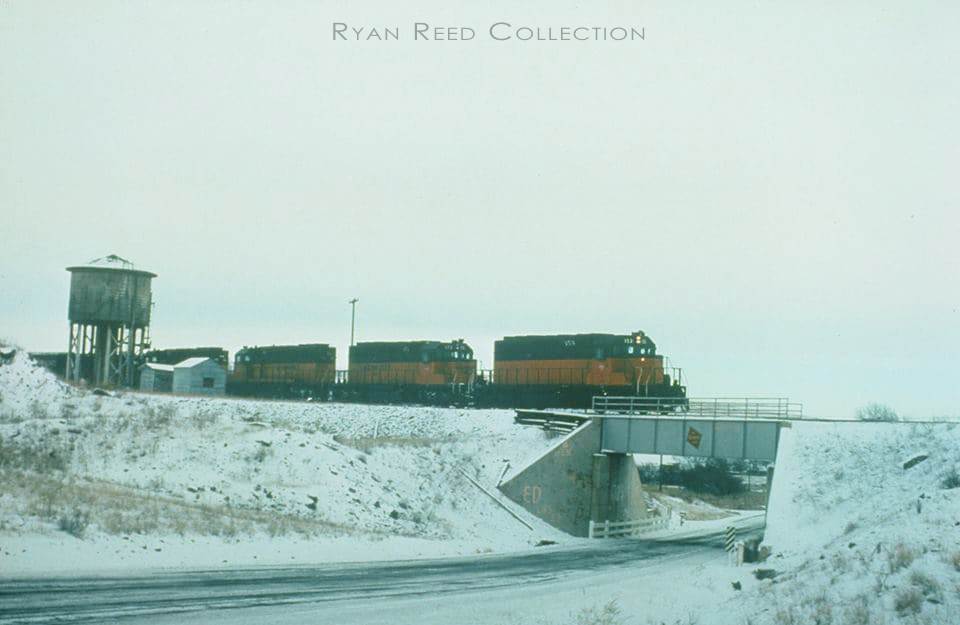 Photo courtesy of Ryan Reed, from his collection. 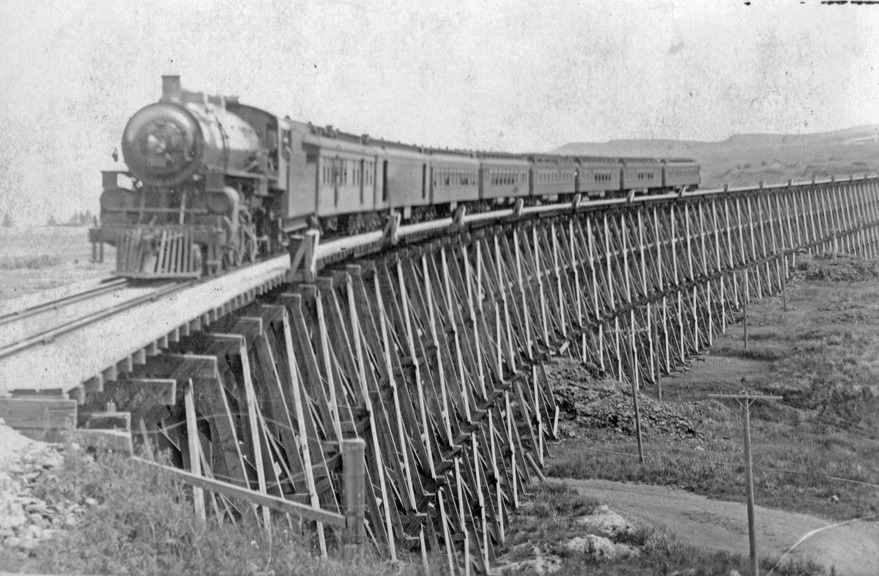 This photo of passenger train No. 15 was taken around 1911-12. The bridge is EE-140, located between Ewan and Lavista. It was an 84-span, 1,329-foot long timber trestle. This bridge was filled during the summer of 1914, replaced with a bridge spanning the Ewan-Rock Lake Road seen below the train. The replacement bridge included a 28-foot concrete abutment, a 25-foot masonry bridge, and a 43-foot concrete abutment .

Trains 27 and 28 that provided local passenger service between Plummer and Marengo via Ewan, Malden, Rosalia and Tekoa were inaugurated with the September 15, 1914 timetable. From that date in 1914, the Olympian and Columbian passenger trains were operated via Spokane between Marengo and Plummer Junction, Idaho. The local trains 27 and 28 were typically handled by gas-electric motor cars, until the trains were abolished sometime in 1930 or early 1931. 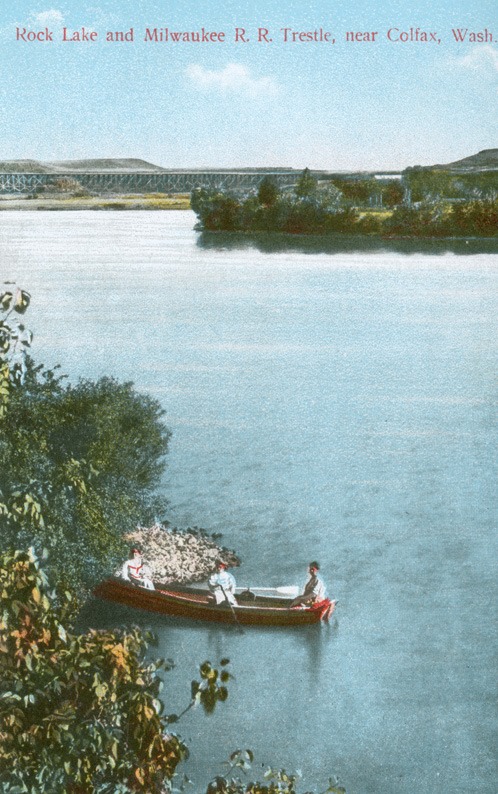 Postcard features some ladies boating on Rock Lake. The Milwaukee Road trestle is in the background. 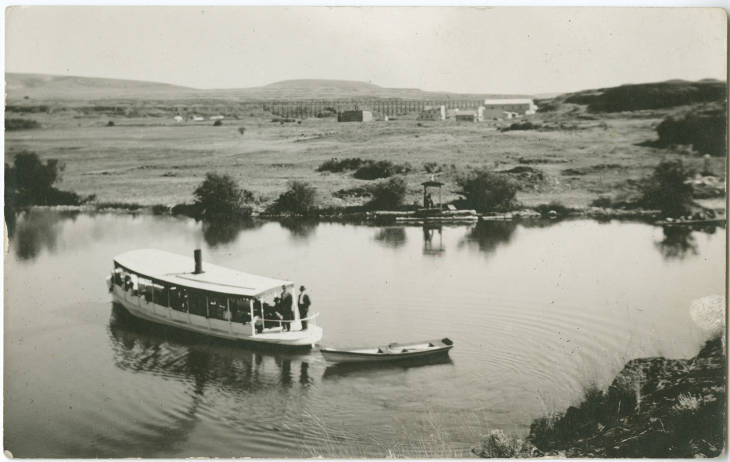 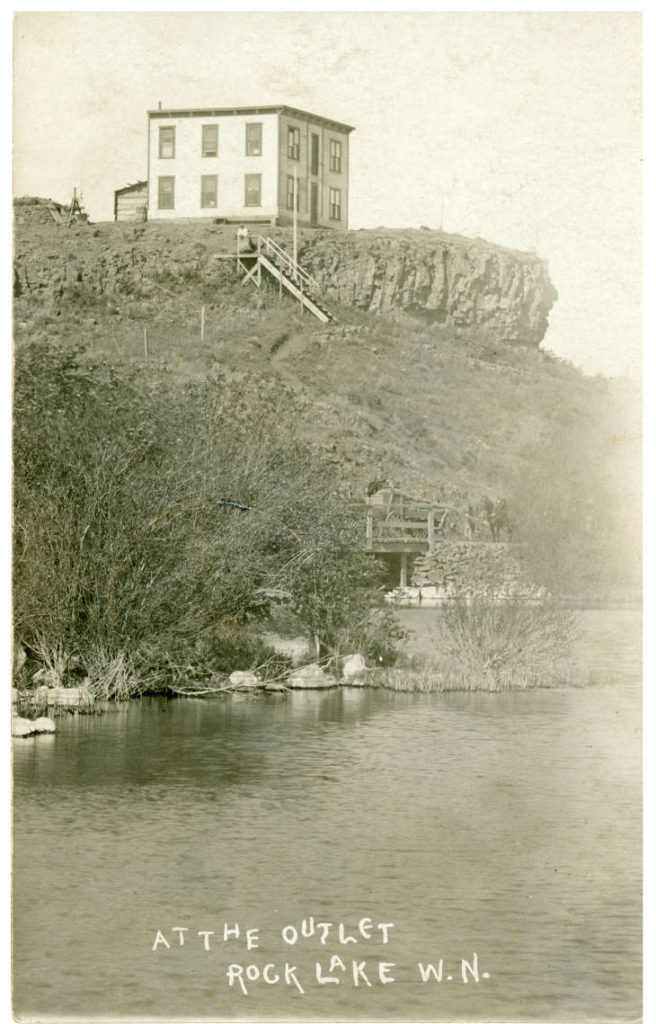 Willis Anson Evans came to Rock Lake, Washington in 1905, platted the town near the lake and started to build a destination full-service resort. He built the Cliff House hotel, where rooms rented for 75 cents a day and Mrs. Evans’ meals were 35 cents each or three for a dollar. The Evans served food to the construction men when the railroad was being built.  Evan’s Cliff House was built high above Rock Creek near the Ewan/Cheney Road at the southwest end of Rock Lake. It was torn down some time between 1920 and 1922.

Tomorrow, the John Wayne Rides will detour around Rock Lake from Ewan to near Hole-in-the Ground, rejoining the right of way near Kenova to end in Malden. While they have to detour, we can enjoy the freedom of virtual travel and explore the whole length of the alluring, dramatic, stunning and foreboding Rock Lake.