Rock Lake is unquestionably one of the most amazing, scenic stretches of our virtual journey. This remote location, with its high volcanic cliffs and a sheer drop down to the water, creates a dramatic setting that gives the the lake its allure. The cliffs continue descending to depths well below the lake’s surface, forming a deep basin carved out by the rapid advances of powerful Ice Age Floods that is filled with murky water. Alas, in this part of our photo essay, trains are missing. This area was a difficult place for photographers to access. Only a few prized photographs of Milwaukee Road trains at Rock Lake are known to exist. Perhaps the scenic setting can make up for that omission?

The John Wayne Pioneer Wagons & Riders detour around the north end of the lake on their cross-state ride. At the northeast end, they descend into a valley and then rise back up. The railroad stays at a relatively level grade, rising ever so slightly as we head east to Idaho.

As we continue our virtual Milwaukee Road journey, we follow the route of the railroad along the length of Rock Lake – travelling over trestles and through two tunnels to its northeast reach. We then join up with Pine Creek,  following and frequently crossing it on our way to Rosalia and beyond. The railroad’s Pine Creek crossings are memorable, as we will see over the next few days of our journey. There is a dramatic shift in the landscape, as we leave the channeled scablands for pine covered hills . 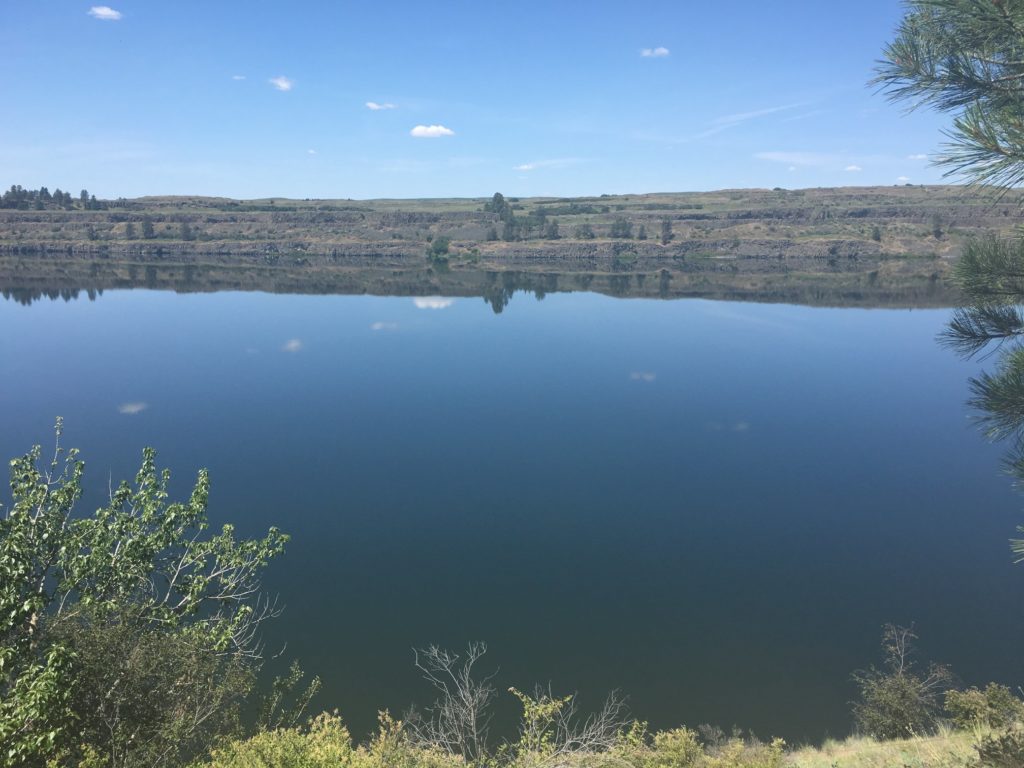 Rock Lake offers a lush green contrast to the brown and beige landscapes of the channeled scablands. This lake was carved out by the Ice Age Floods, caused by the repeated collapse of the Lake Missoula ice dams.

Rock Lake is roughly seven miles long, a mile wide and has an average depth of 170 feet, with its greatest depth estimated to be around 360 feet. The lake has high steep cliffs along all the sides. There is just one public boat launch on the lake, located at the southwest outlet of the lake near Ewan. 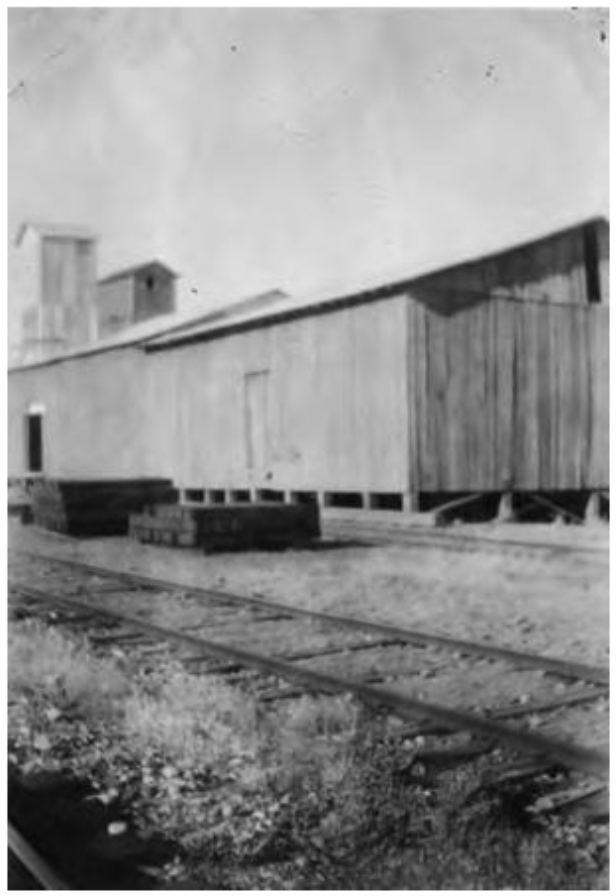 Near the west (southwest) end of Rock Lake, about four miles east of Ewan, you come to the station of Lavista. The Milwaukee built a depot with living quarters here in 1909, but didn’t open it until June 1911. It was used as a night train order office when the new Olympian and Columbian passenger trains were put on. The original depot may have burned down, as an 8’x26′ carbody is listed later as a depot. This photo shows the warehouse and elevator at Lavista in 1929. 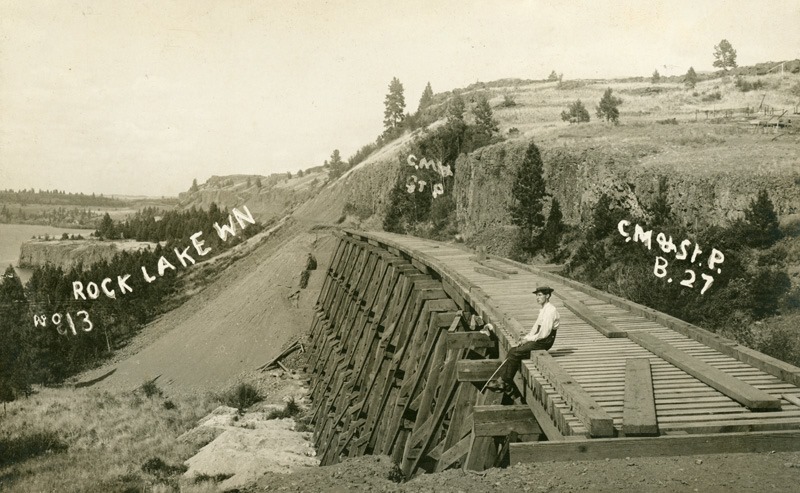 Here is a construction era photograph looking eastward at a nearly completed timber bridge along Rock Lake. This is believed to be bridge EE-138, a 32-span timber trestle, located two miles east of Lavista. It was later filled in, replaced by a 174-foot long 10’x10′ concrete arch culvert. 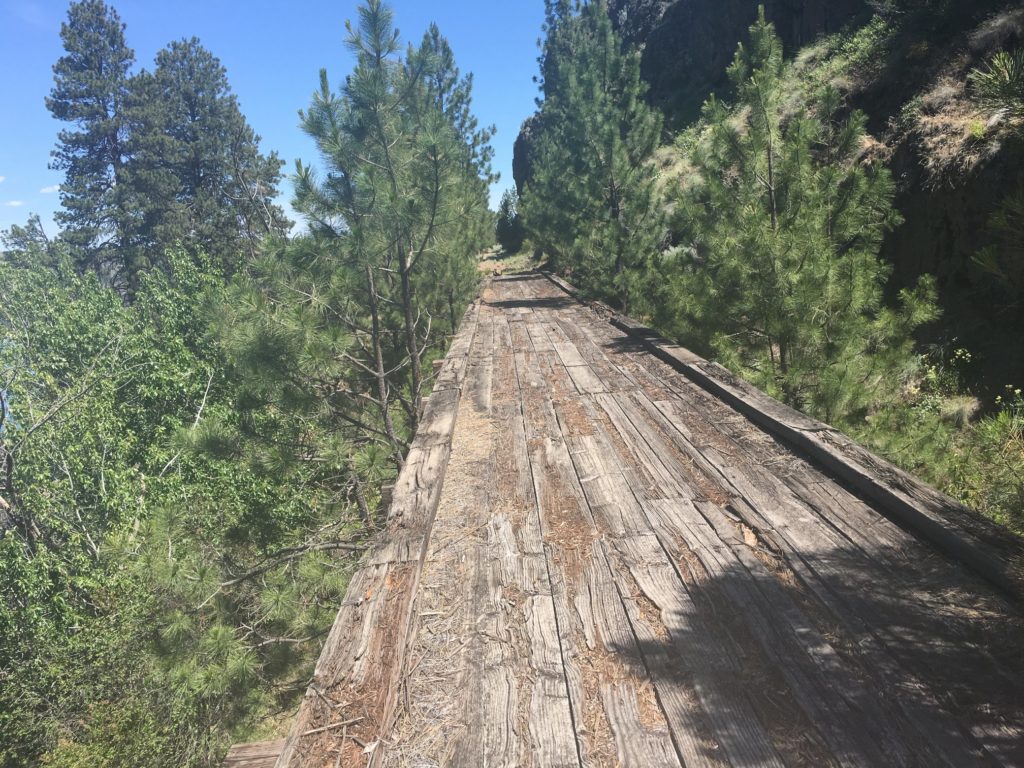 This is bridge EE-136, a 9-span framed wood trestle near the southwest end of Rock Lake. This bridge is closed to public access. It has become overgrown with vegetation and has not received maintenance in recent years. Private property issues have closed off the trail just beyond it. This marks the limits to travel on the trail from Ewan and the southwest. 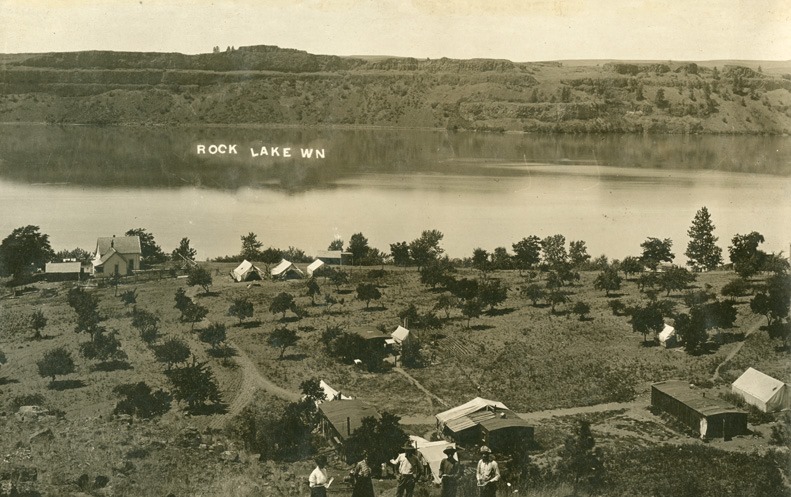 Here is Johnson’s Beach, as seen from the south side of the lake. The lake has high and steep bluffs on all sides, and this little beach site is like a paradise. Orchard trees are planted, and this is a resort-like atmosphere compared to the harsh, rocky sun-dried places traversed getting here. Johnson Beach on Rock Lake is where many of the survey crew camped while building the railroad. The beach was on the Charles Johnson farm. This photo is believed to date from circa 1906. 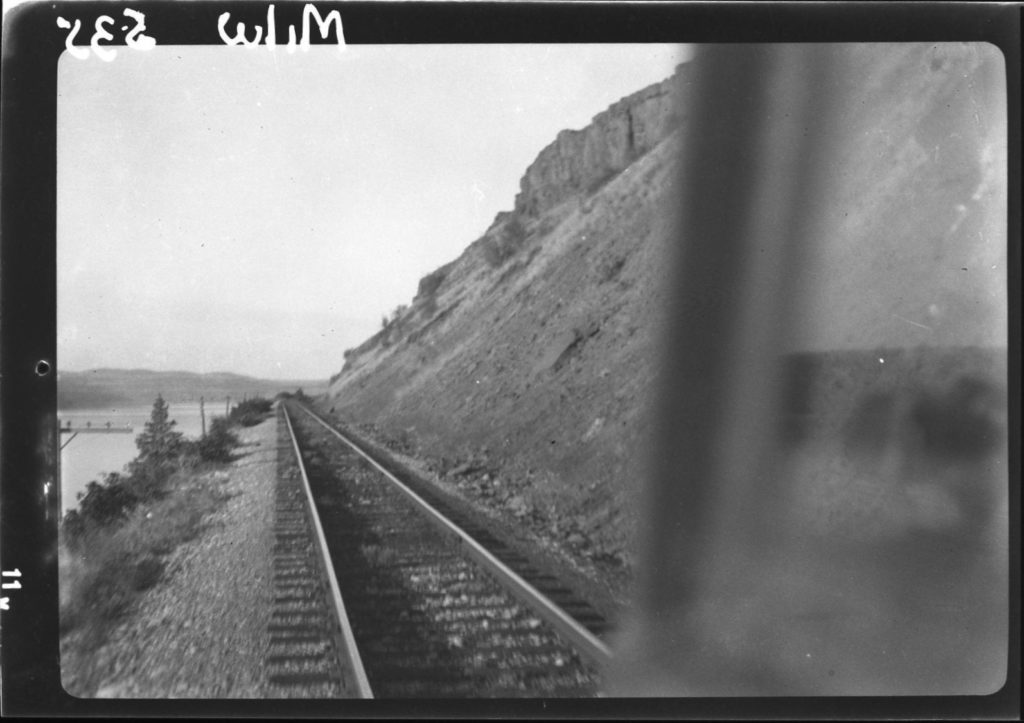 John W. Barriger III took this photo along Rock Lake on his September 1936 inspection tour. There is a stark beauty to this place, hinting at the dramatic conflict between flooding water and volcanic rock. 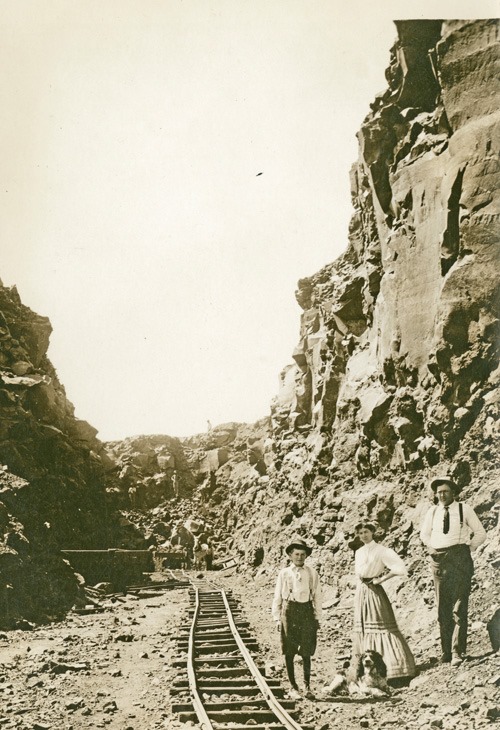 During the construction of the Milwaukee Road, numerous photos are found of local residents, including women wearing dresses and large hats, visiting the work site. Here we see local residents visiting one of the construction sites along Rock Lake, wearing their finery and accompanied by their dog. A narrow gauge track is laid through the cut to haul away rock and spoils while carving out the route. 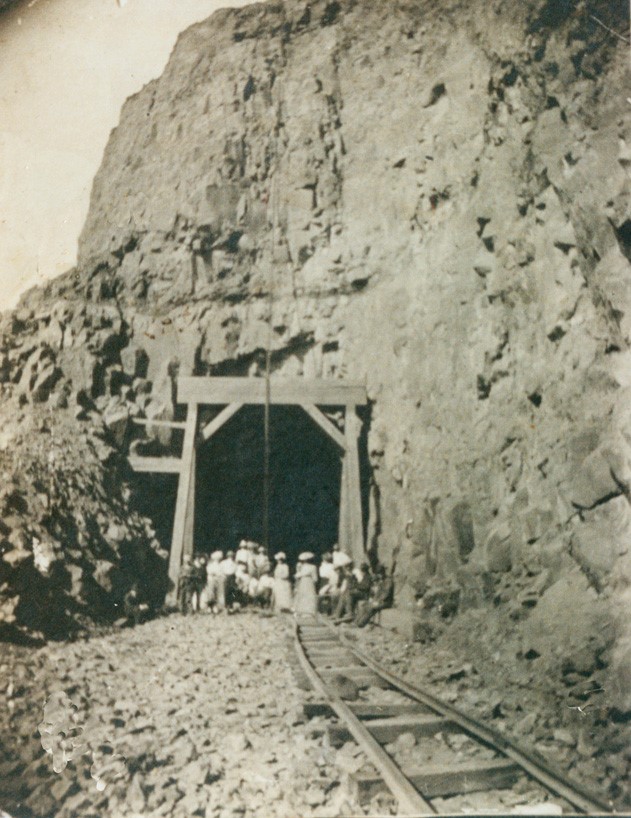 This is Tunnel 44, the first of two tunnels heading east along Rock Lake. The construction work is underway, a narrow gauge construction track is in place for moving the rock and spoils from the tunnel construction. We see another group of locals on an outing to inspect the progress of the railroad workers. 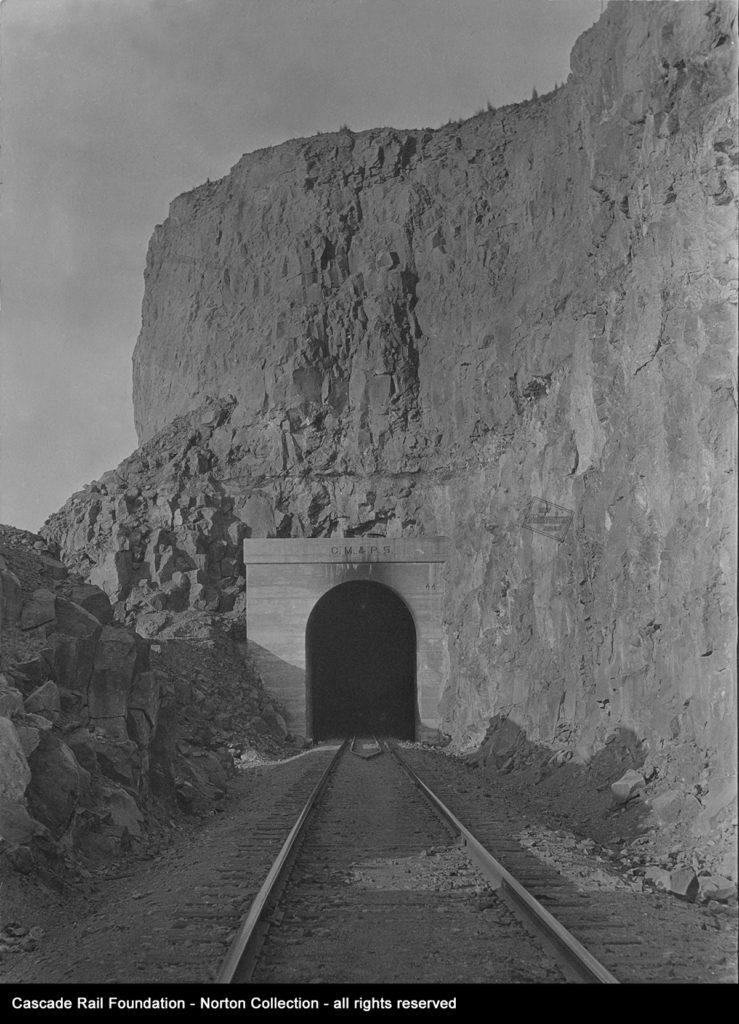 Here is the completed west portal of Tunnel 44. Compare this scene from the earlier construction photo. The concrete portal bears the initials “C.M. & P. S.” for the Chicago, Milwaukee & Puget Sound; the subsidiary of the Chicago, Milwaukee, & St. Paul that constructed the Pacific Coast Extension. This is at the east switch of Rock Lake station (formerly Palisades) looking east. 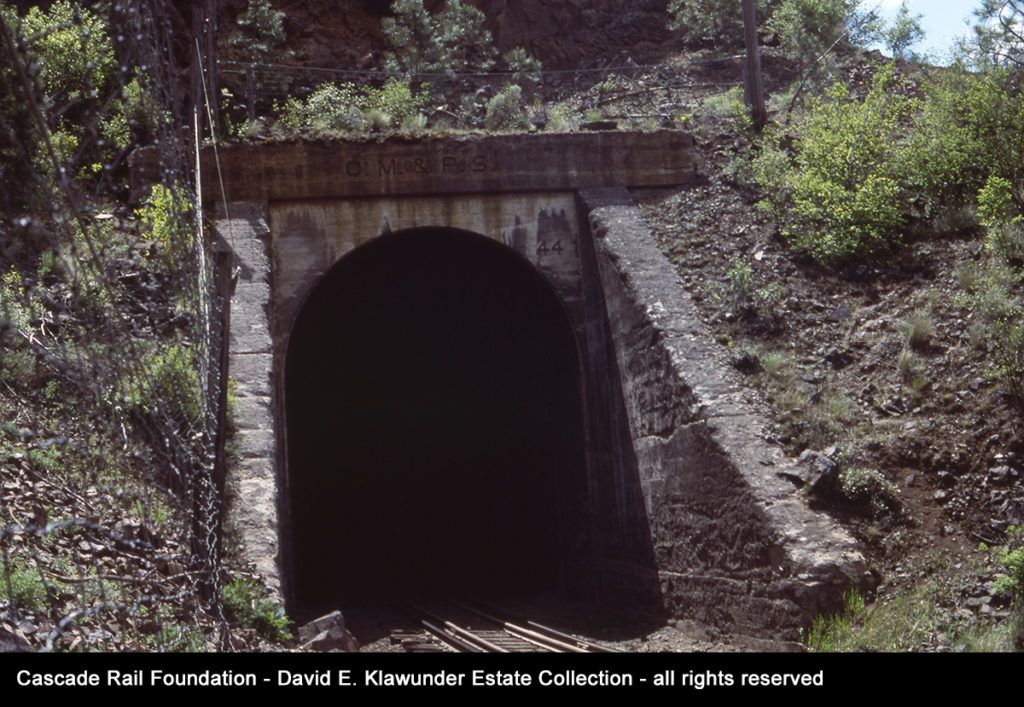 This is the east portal of Tunnel 44, 704 feet from the west portal at the other end, as seen on May 21, 1977. The railroad numbered their tunnels from east to west, Tunnel #1 was in Tunnel City, Wisconsin. Tunnel #2 was in Montana, and they continued to increase as the railroad crossed a number of mountain ranges in its expansion to the west. 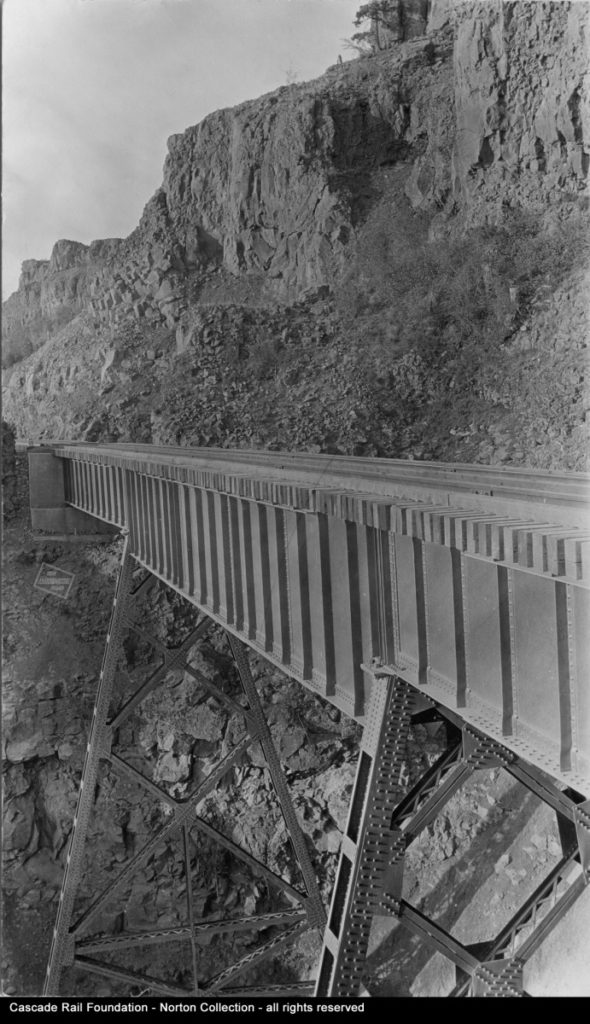 Near the east portal of Tunnel 44  is bridge EE-130. This is a 3-span, 194-foot long steel structure. The bridge highlights the difficulty of building along the steep cliffs surrounding Rock Lake. 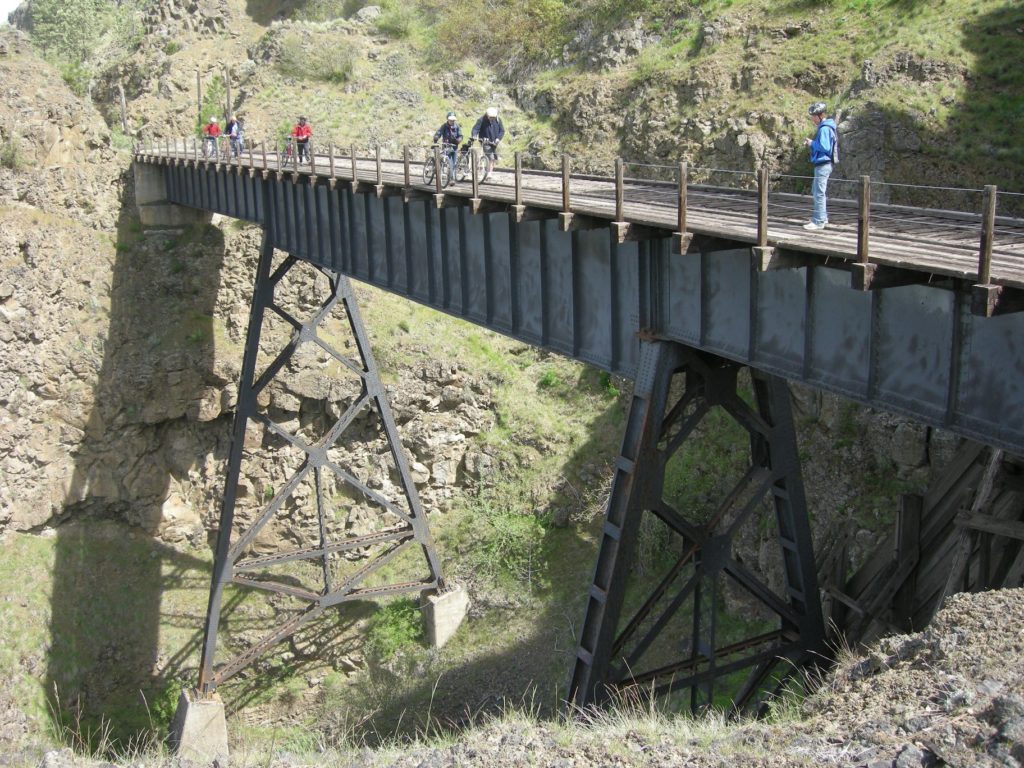 Here is a more recent view looking east at bridge EE-130, taken close to the vantage point of the earlier photo above during an Ice Age Floods bicycle tour in 2010. Bicyclists on the tour were treated to expert commentary by Professor Gene Kiver and Professor Charles Mutchler of Eastern Washington University (Cheney). The tour began at the northeast side at Rock Lake near Hole in the Ground Road and continued beyond the west end of Tunnel 44. 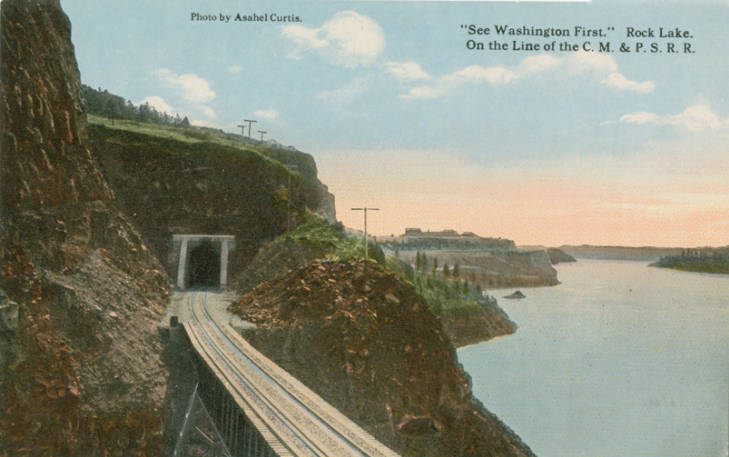 Here is another view of bridge EE-130, looking railroad west (southwest) towards the east portal of Tunnel 44.  The photo was taken by photographer Asahel Curtis and colorized for this souvenir postcard. Curtis was commissioned to photograph Milwaukee Road scenes in the west during the early years of the Pacific Coast Extension, mostly from 1909 into the 1920s. 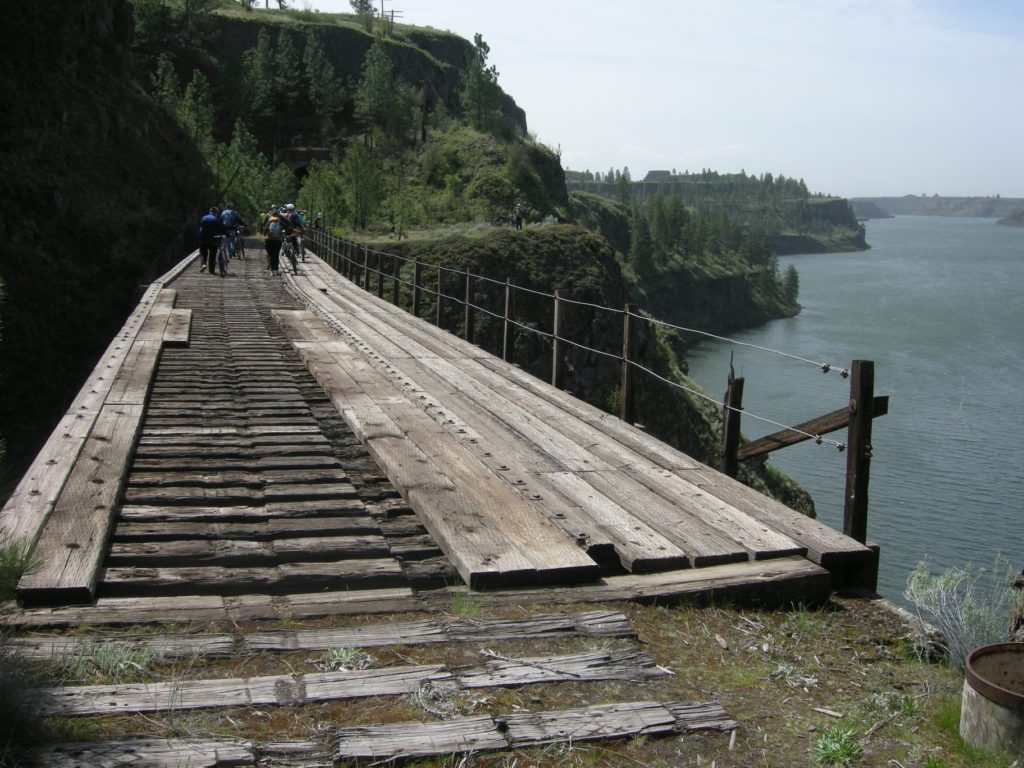 This is a comparable, more recent view of the portal of Tunnel 44 looking west across bridge E-130. It was taken during the Ice Age Floods tour of 2010. 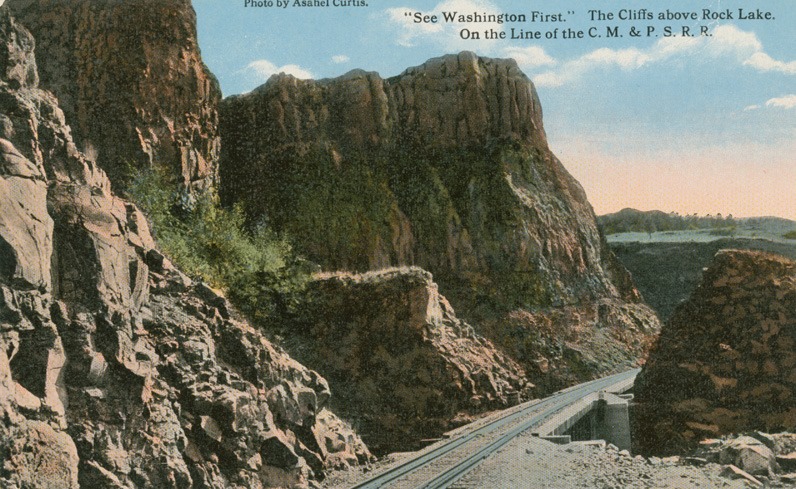 Here is another Asahel Curtis photograph of Rock Lake printed as a colorized postcard. The specific location of this spot is currently unidentified. 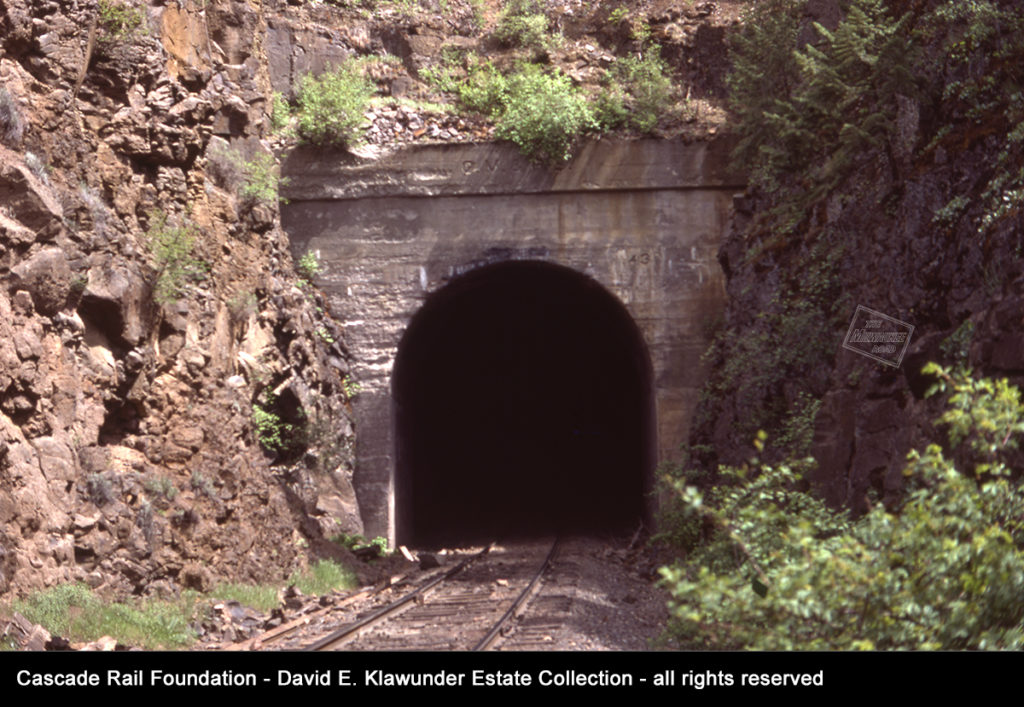 Tunnel 43 is located about a mile east of Tunnel 44. It is 756 feet long, just 52 feet longer than its companion tunnel along Rock Lake. Cast in the concrete of the portal are the initials “CM&PS” above the apex and the number “43” to the right. This photo was taken on May 21, 1977. 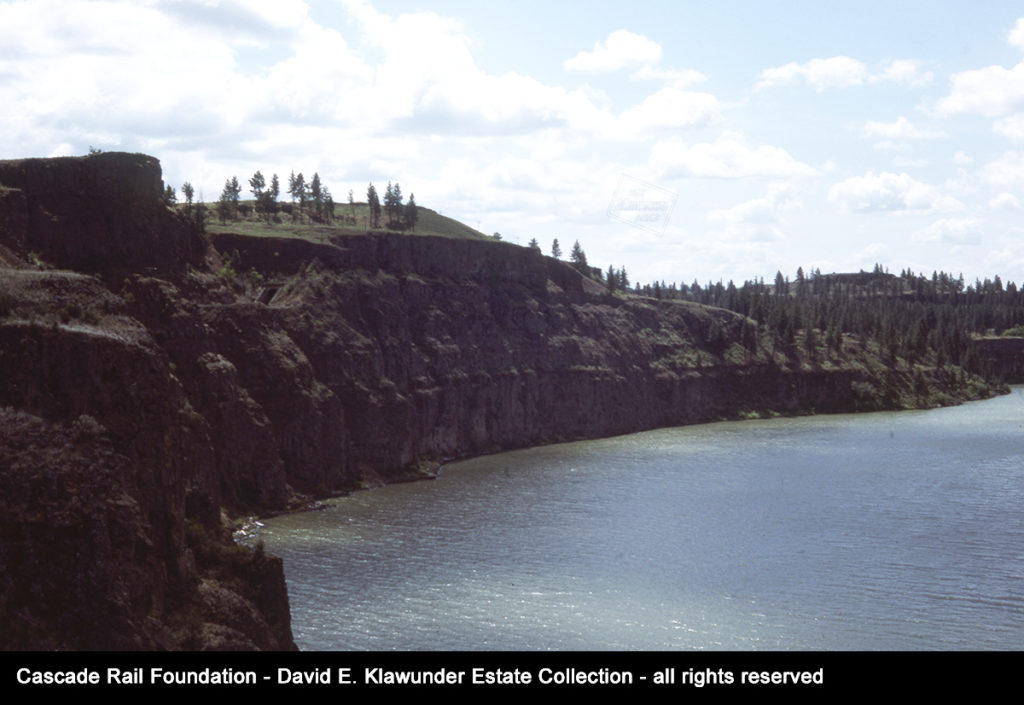 Rock Lake provides stunning views. It was dramatic example of the powerful forces of time; volcanic rock standing up to Ice Age Floods. This scene looks southwest at the lake on May 21, 1977. You can spot the east portal of Tunnel 43 near the left edge of the photo. The railroad crews had to claw and fight the volcanic rock to carve out the route through here. Men and machinery attempted to work their way through the hillsides. 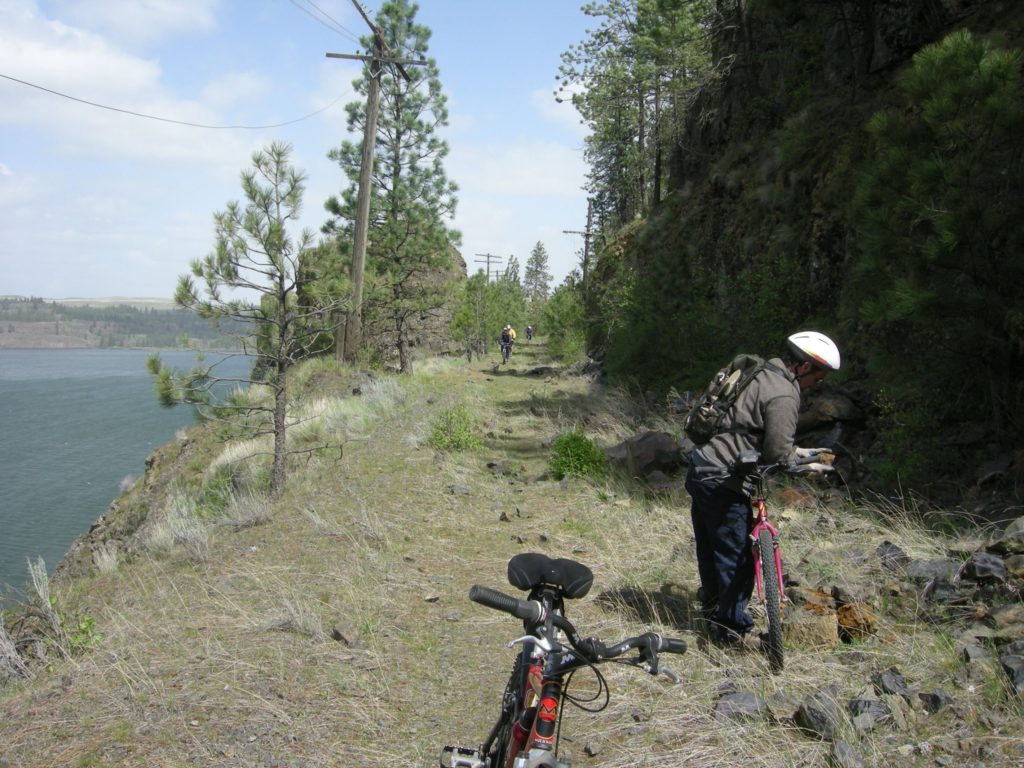 Professor Charles Mutschler of Eastern Washington University shared his knowledge of railroad history during an Ice Age Floods Tour. On April 24, 2010, Dr. Mutschler presented the railroad history while traveling along the Milwaukee Road right of way. Professor Gene Kiver presented insights of the dramatic and cataclysmic geological events during the Ice Age Floods. This guided tour was sponsored by the Ice Age Floods Institute and supported by Eastern Washington University.

Sadly, Charles Mutchler passed away in 2019 in an auto accident. He was known for his passion for history, railroading and his mentorship and friendship. He is missed.

Photograph taken by Kent Sullivan in 2010. 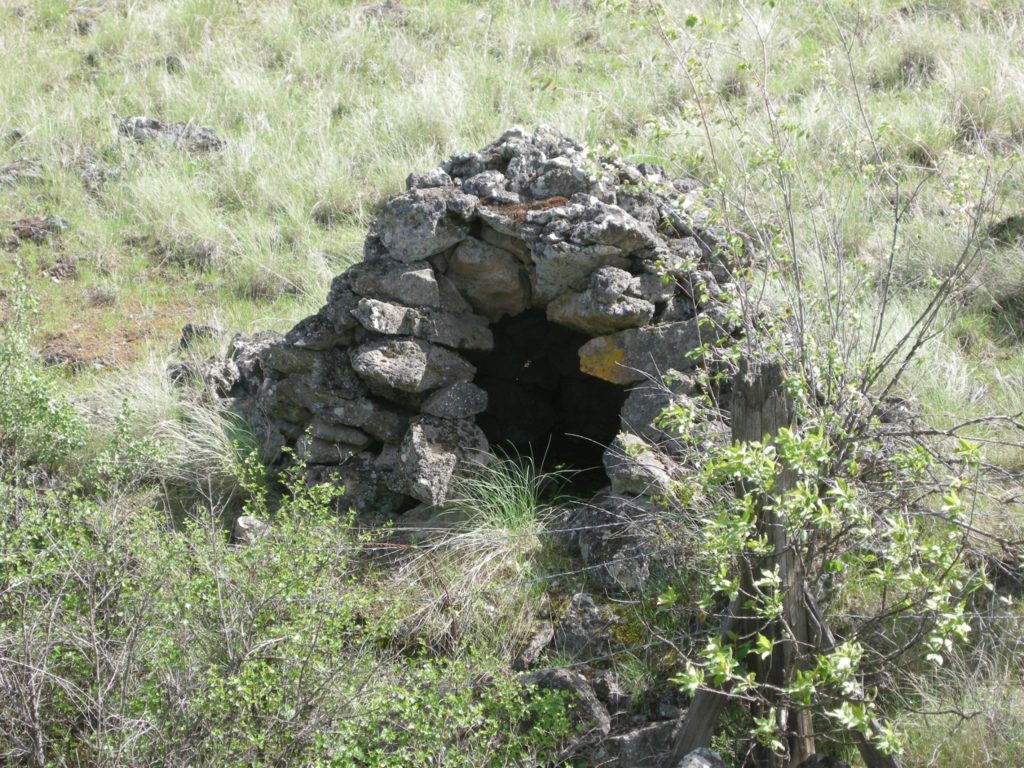 During the 2010 Ice Age Floods and history hike at Rock Lake, this rock oven was pointed out. It was used for baking bread and cooking to feed hungry railroad construction crews. The railroad was completed and in operation through here by 1909. 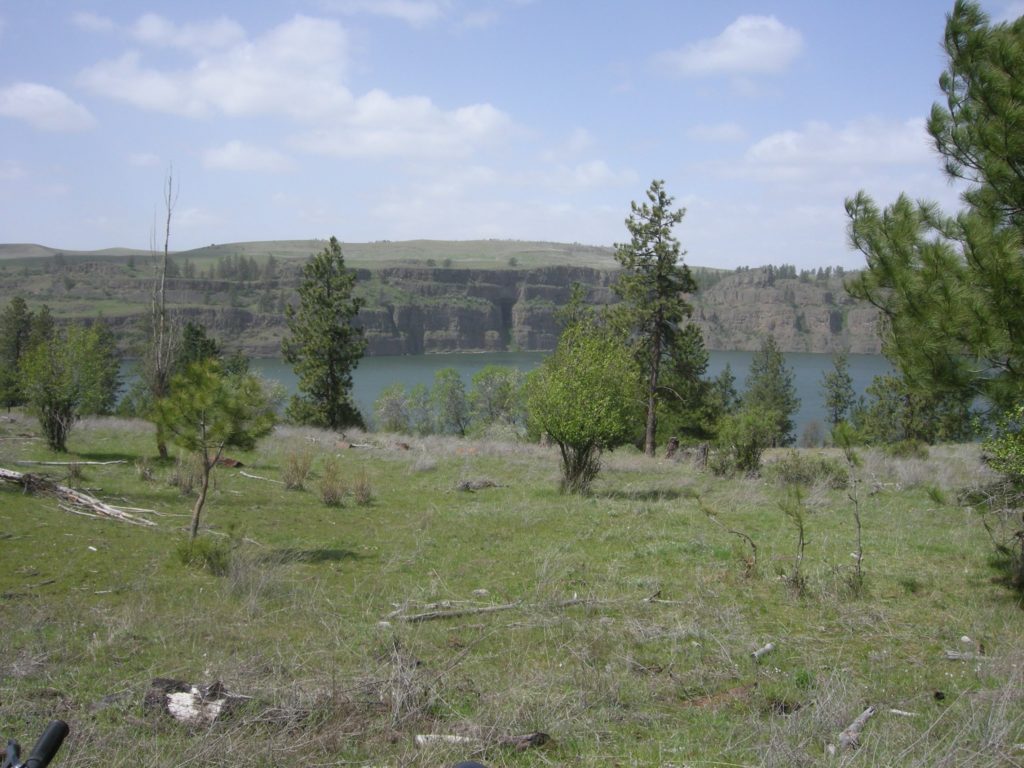 Rock Lake as viewed from the right of way, across a rare patch of flat ground along the lake. The lake itself is a mile wide in most places.

HOLE IN THE GROUND 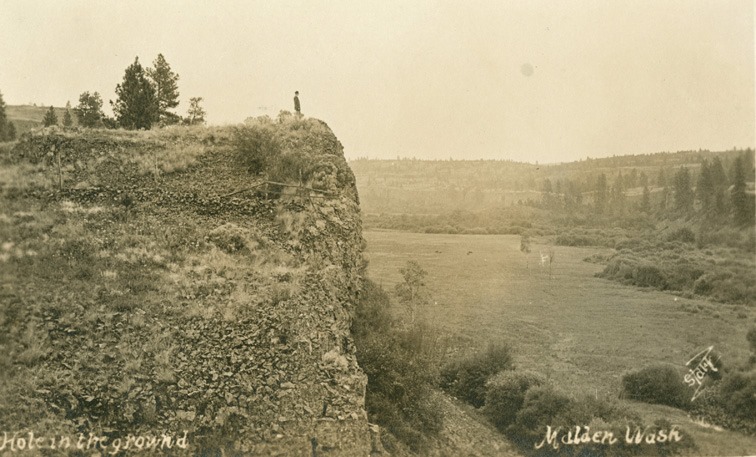 Near the northeast end of Rock Lake the Milwaukee Road passed near a rock feature known as “Hole in the Ground”. 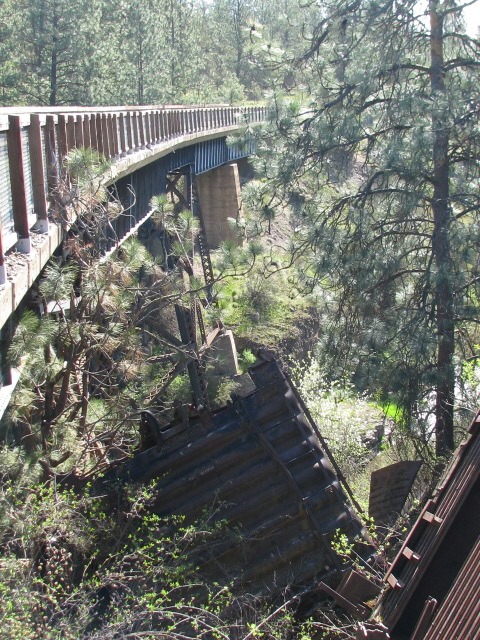 Late in February 1980, just weeks before the last runs of the Milwaukee Road, an eastbound train derailed onto the Pine Creek at bridge EE-122. It scattered rail cars on the deck of the bridge and was a challenge for crews to clean up. Two Milwaukee Road boxcars from this derailment were left behind, wheelsets and brakes removed. These two cars linger behind, a sad reminder of what once was at this almost sacred place. 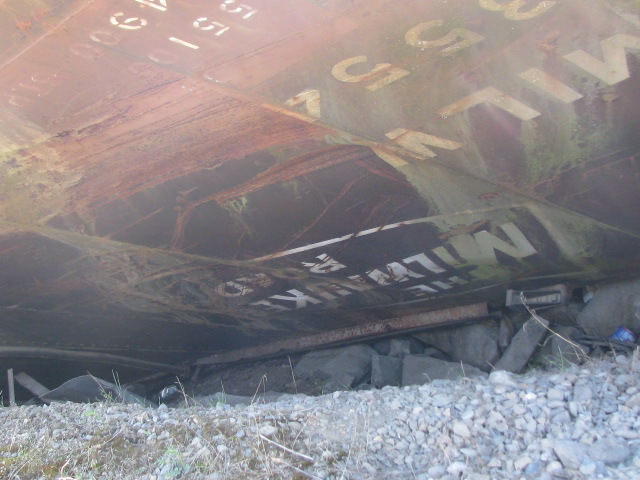 Here is a close up view of one of the two Milwaukee Road boxcars that were cast aside after the derailment and never picked up before abandonment in 1980. The boxcars were built in 1962 and 1967. A poignant message is stenciled on the side of MILW 13554, in very faded paint: “Return to Agent Harlowton”. The instruction for this car’s return to Eastern Montana for reloading went unheeded.

Tomorrow we visit Malden, a railroad town, whose fortunes were closely tied to the Milwaukee Road.