We are leaving the Tekoa depot, just east of the impressive Tekoa Trestle, and continuing through more of the rolling hills that are characteristic of the fertile Palouse. We’ll pass through a tunnel and arrive at Plummer, or Plummer Junction as it was known into the 1960s.  This is the last travel day on our virtual tour, one that began in Cedar Falls on May 19. 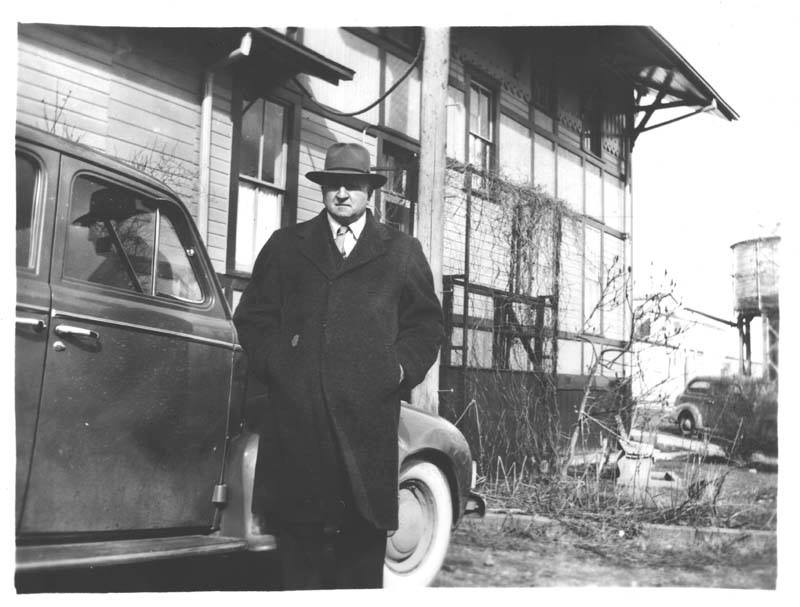 We will start our trip from the Tekoa at the depot and head east  to Plummer Junction in Idaho. Here we see the Tekoa agent behind the depot. The water tower can be seen just off to the right, east of the depot. 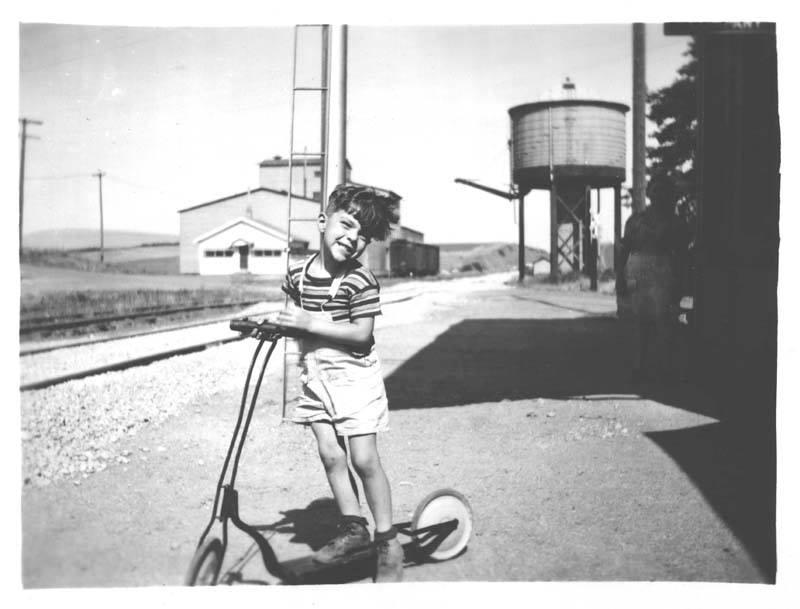 Here we are on depot platform at Tekoa, looking east. The water tower, train order signal, an agricultural warehouse, and a small shed are all visible in the background. The child on the scooter is believed to be a relative of the agent. 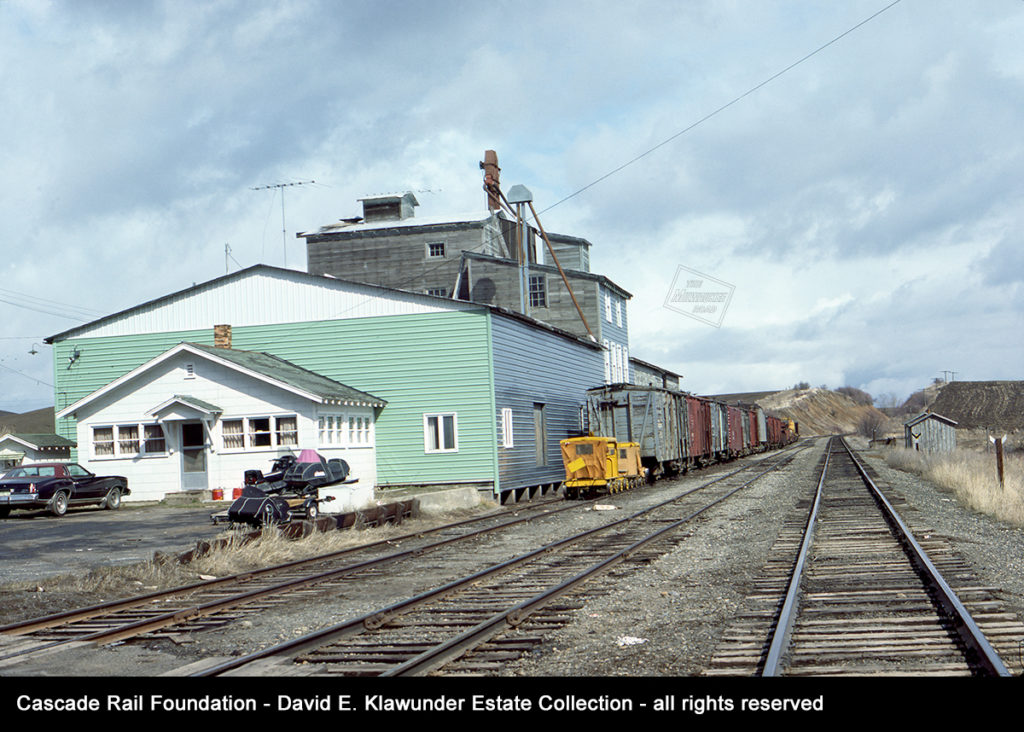 This photo was taken on March 23,1975, near the former site of the Tekoa depot. The depot and water tower were gone by this time, but the warehouse and small shed are still standing. On the spur next to the warehouse there are track motor cars and outfit cars for maintenance of way crews.

By 2018, more changes have occurred. As we look east again from near the depot site, the warehouse is still there, though a bit modified. The railroad is long gone. 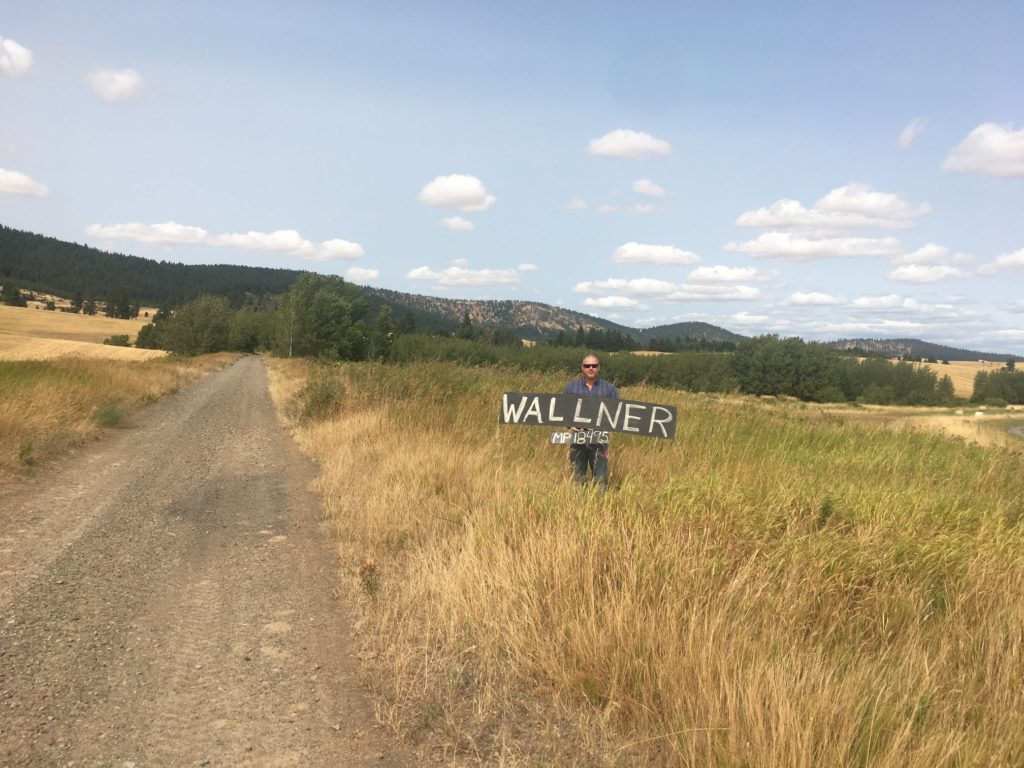 Wallner was the site of a team track spur out in the country east of Tekoa. In this view looking east, Preston Cliburn holds a sign during the station sign project site visit in August 2018. 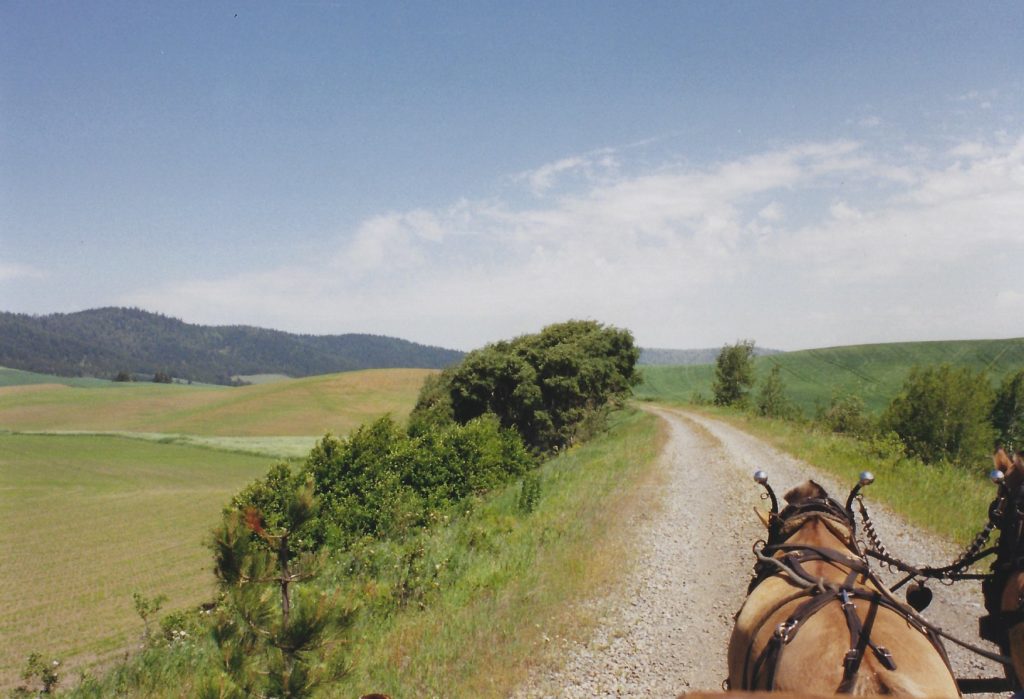 For the John Wayne Riders, Sunday at Tekoa means a hearty breakfast in town and either breaking camp, or taking an optional ride down the trail to Idaho. Howard Berge’s team of Norwegian Fjords is seen here in 2003 plodding along eastward, accustomed to hundreds of miles of this trail. 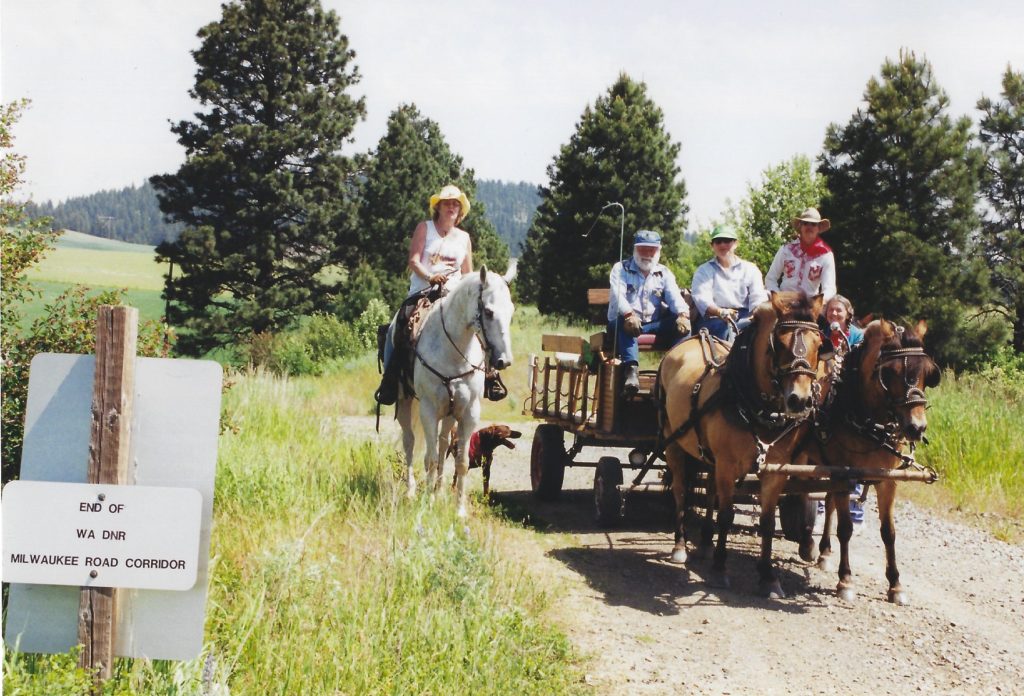 The cross-state ride’s Sunday excursion ends at the Washington-Idaho state line. Pictured left to right, Carol Hart, Howard Berge, an unidentified participant, John Banks, and Judy Westfall below. This was the conclusion to a wonderful 2003 cross-state ride. Soon it will be time to turn around and head back about 5 miles to Tekoa.

Note the sign: “End of WA DNR Milwaukee Road Corridor.” Washington Depart. of Natural Resources at one time managed the trail east of the Columbia River. It was known as the Milwaukee Corridor. State Parks is now the designated as the manager of the trail from Cedar Falls to the Idaho line, with several gaps or detours in between.

After years of a confusing variety of names for the trail – John Wayne Pioneer Trail, Iron Horse State Park and Milwaukee Corridor – the name Palouse to Cascades Trail was designated to identify the entire route, the former main line of the Milwaukee Road.

This is the end of the Palouse to Cascades Trail in Washington State. Currently the right of way in Idaho is privately owned, but there has been some discussion about extending the trail into the state. 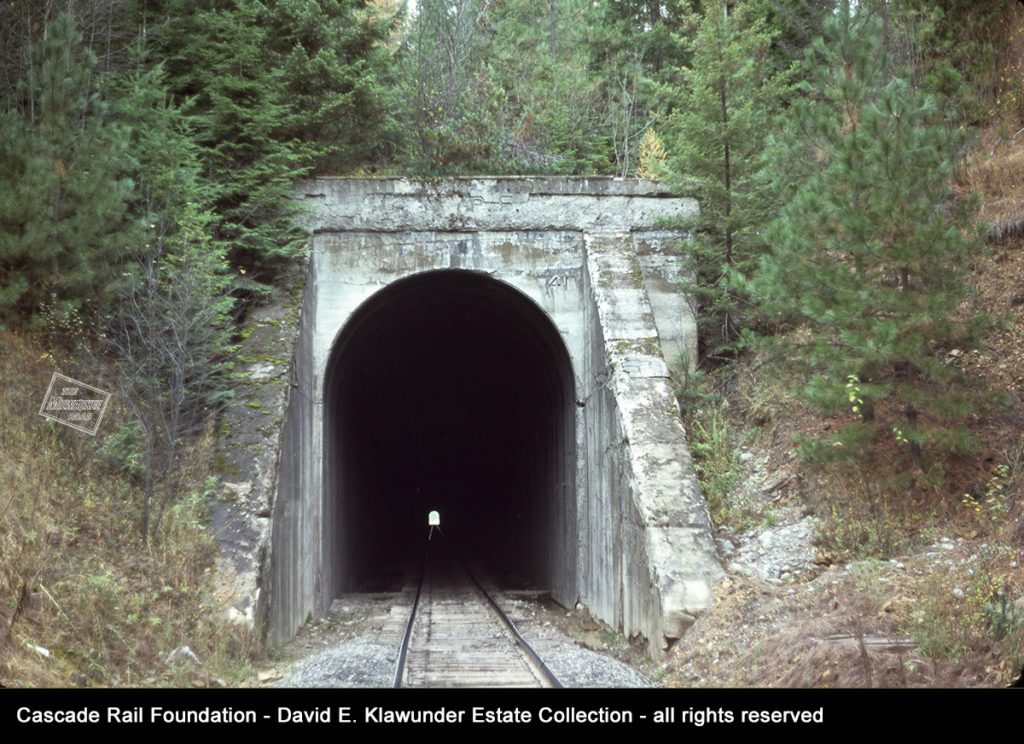 The Watts Tunnel is 2559 feet long. It is also known as the Sorrento Tunnel. The tunnel is located about nie miles east of Tekoa. Above the tunnel, the Union Pacific Railroad line between Wallace to Tekoa crossed the Milwaukee Road. This is near the summit of a steady but gradual grade of roughly a quarter of a percent from Tekoa. East of the tunnel, the grade descends one percent to Plummer. This photo was taken on November 5, 1975. 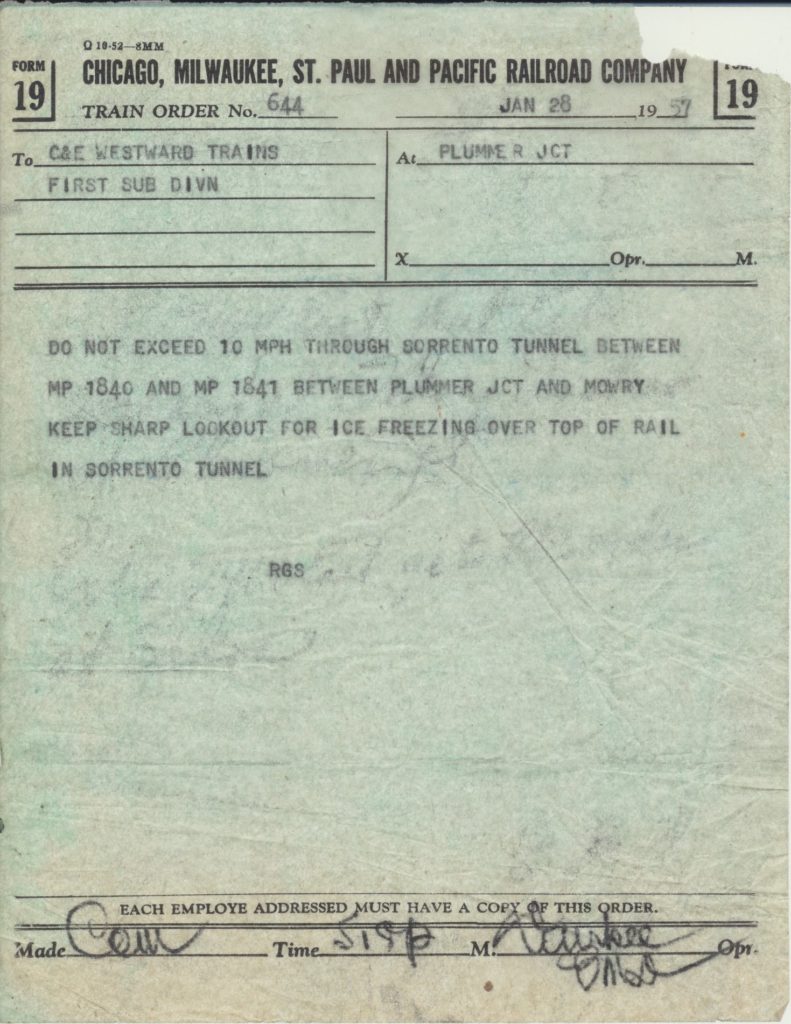 This train order was issued by the Milwaukee Road dispatcher on January 28, 1957 and copied by the operator at Plummer Junction. Addressed to the conductor and engineer (C&E) of westward trains, it warns of the hazards of ice over the rails and a speed restriction in the Sorrento Tunnel.

Courtesy of Allen Miller and his collection. 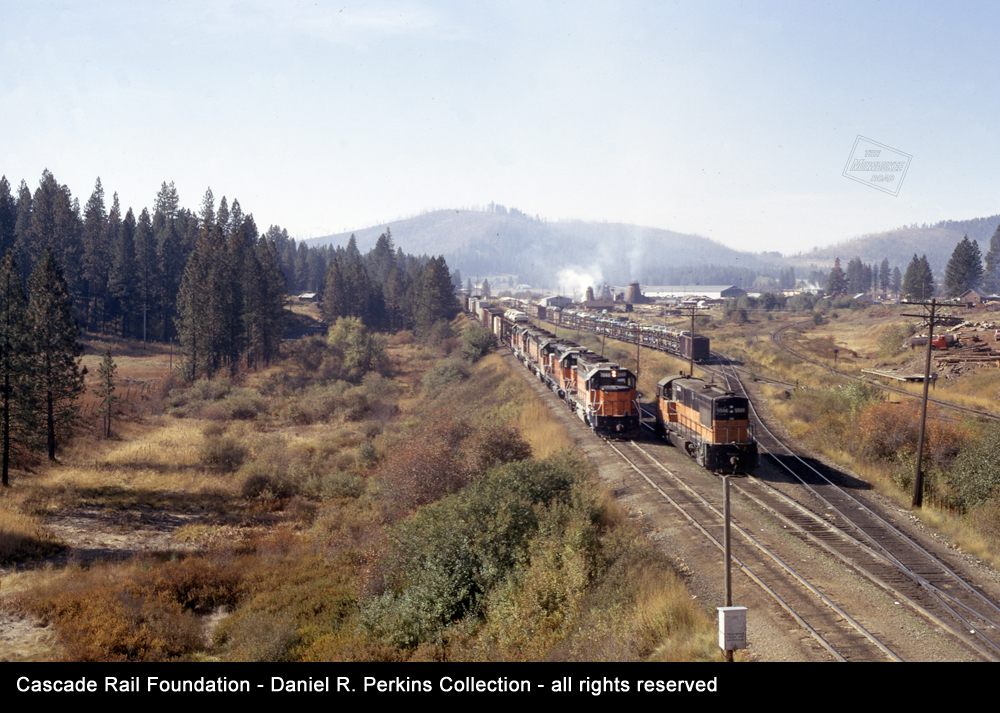 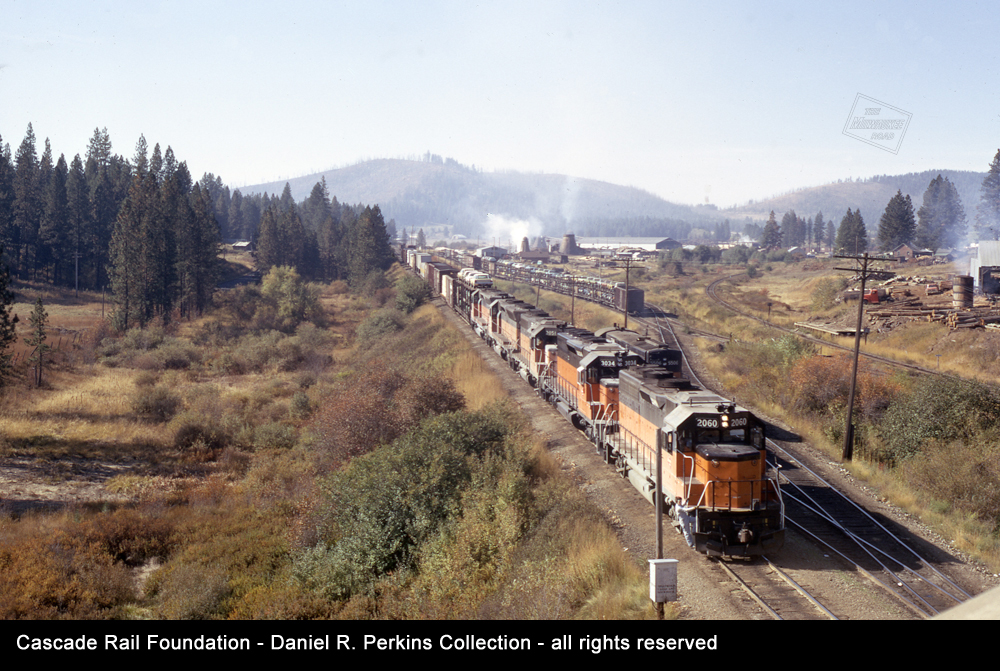 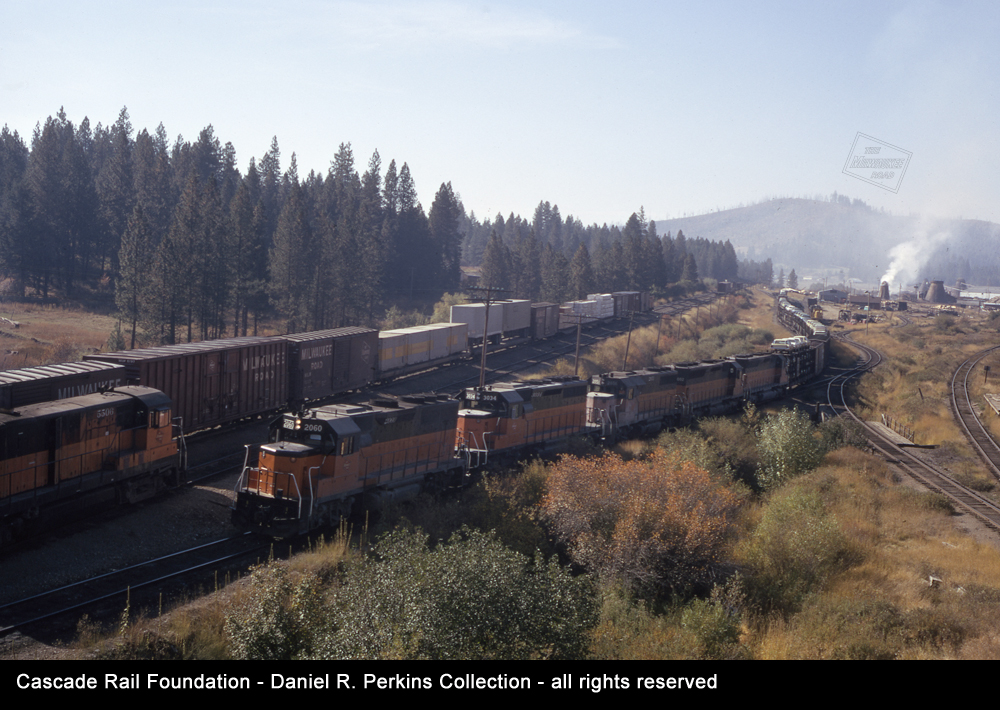 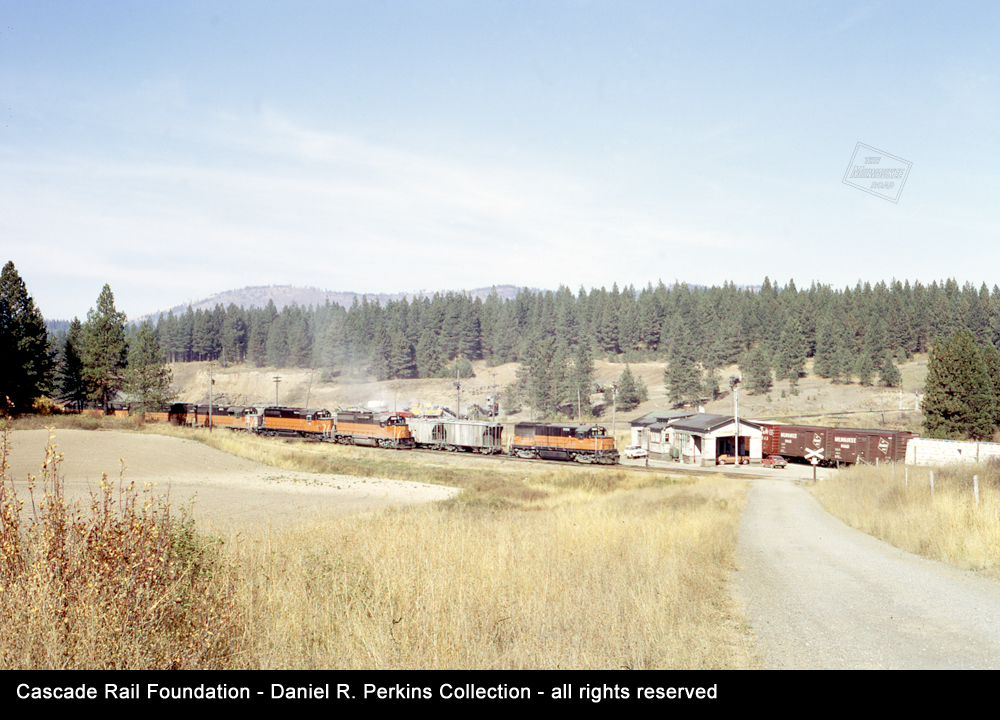 This series of photos documents the action at Plummer on Monday, October 2, 1972. Rob Leachman describes the sequence of movements.

In the first view, train 264 stands on the main line powered by a five-unit Locotrol consist headed by GP40 2060. Immediately to the right of the train is Plummer siding. Looking back towards the lumber mill, the lower tracks were the setout tracks where cars would be set out by main line trains for the East Spokane – Plummer Turn to take, and where cars left by the Turn could be picked up by the main line trains. Note the long string of loaded auto racks (fronted by one box car) destined to Spokane that were set out by westbound main line trains.

By the time photographer Perkins set up for his photos, train 264 had already set out on the siding U30B 5506. 5506 was the third unit in 264’s power consist out of Tacoma and has been set out at Plummer for work train service.

In the second view, train 264 is pulling forward towards the photographer, the head brakeman standing on the pilot steps in preparation for some switching moves.

In the third view, the power for 264 has uncoupled its first two cars (an auto rack of vehicles assembled in California and an SP boxcar, both received in interchange from Southern Pacific at Portland), and has shoved them to a joint with the string of other auto racks for Spokane in the lower yard.

In the fourth view, the East Spokane – Plummer Turn has arrived, powered by a single U25B. The Turn has spotted its west cars (two cement loads from Metaline Falls) on the siding and temporarily left its east cars on the Spokane main behind the depot. The power for 264 is seen throttling up, perhaps backing up to recouple to its train. Momentarily, the Turn’s unit will return to the Spokane main, back up its remaining consist of east cars, and take the other leg of the wye down into the interchange yard. 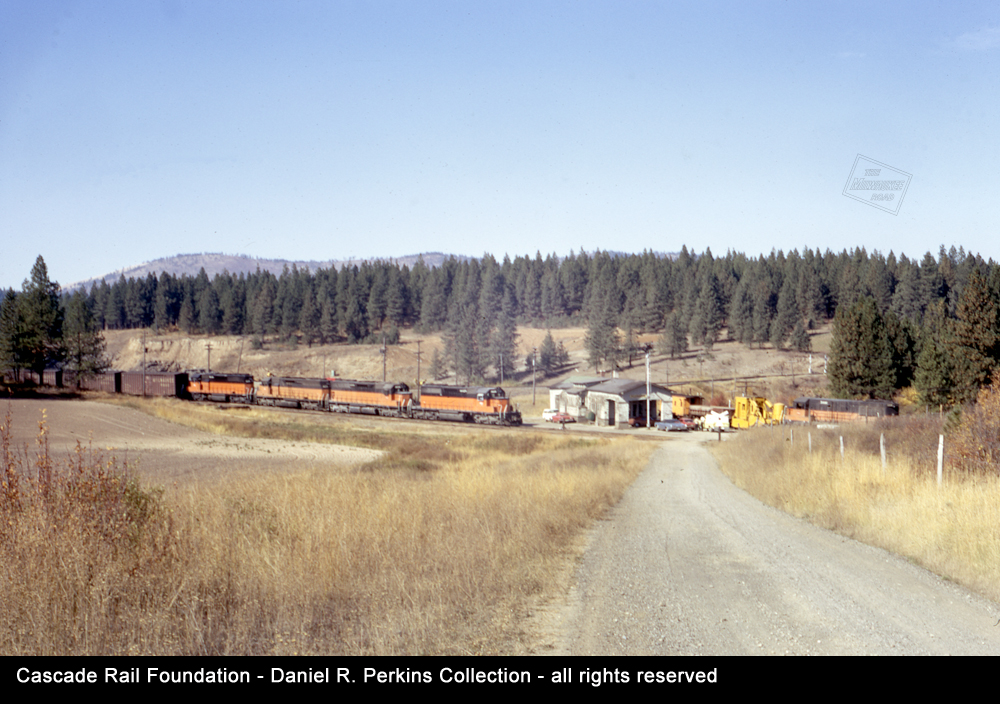 Daniel Perkins returned to Plummer the following day and captured this view. Rob Leachman continues with the story.

In the fifth view, taken on the subsequent day, train 264 passes the Plummer depot, powered by four six-axle units. On the other side of the depot, the work train has come on duty and awaits 264 to pass. Powered by U28B 5506, the work train includes a Jordan Spreader, an air dump ballast car, and a caboose.

Allen Miller drew this map Plummer and Plummer Junction that shows the configuration of the wye, location of water tank, depot and the old U.P. line that went under the legs of the wye. The Plummer Junction depot was located inside the wye off the main line between Malden (west) and St. Maries (east). Trains from Spokane would come in from the east (right) and have the option of going either direction on the main line. The Union Pacific line from Tekoa to Wallace also came through Plummer. 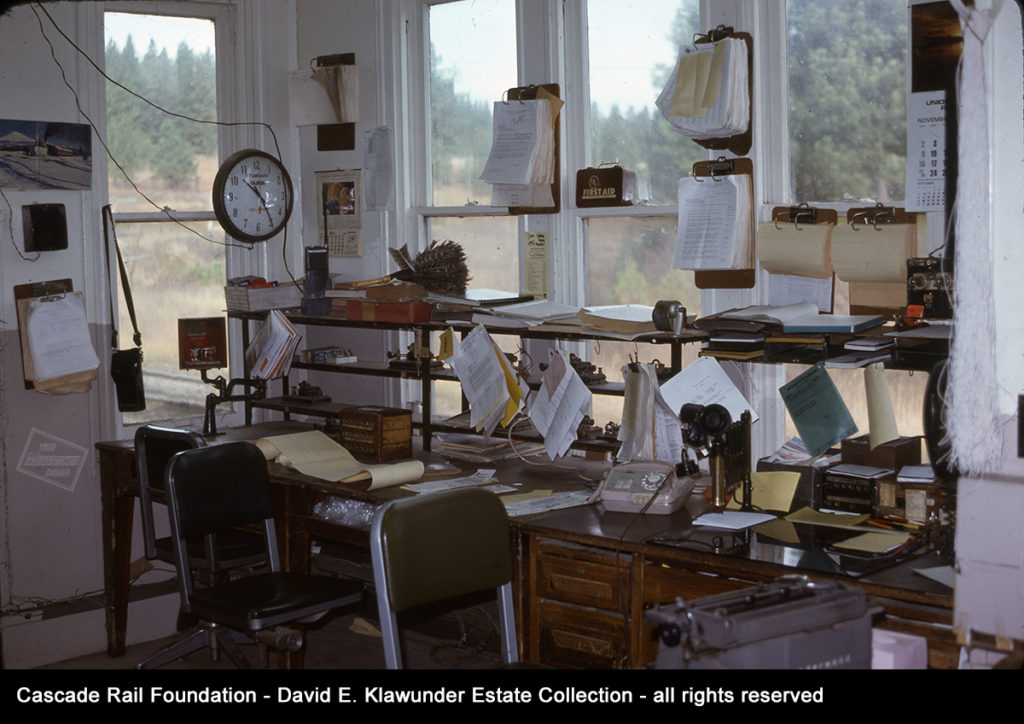 Inside the bay window of the depot at Plummer, we see an example of one of the many communication hubs that once existed in depots along the railroad.

Plummer Junction was a relay office as well as a train order office. In addition to delivering orders to trains, the office also bridged telegraph circuits to pass along messages. In this view of the operator’s desk, you can see the various overlapping forms of railroad communication that existed, even into the 1970s. At the left, what appears to be a portable radio in its case hangs from a nail next to the window. To its right is a telegraph sounder housed inside a wooden resonator on a swing arm stand. Railroad telegraphers using a variation of Morse Code known as “American Morse”. On the desk further to the right is rotary dial telephone (sometimes referred to as the “city phone” which connected to the commercial phone network) and a candlestick phone mouthpiece for the railroad dispatcher’s phone and block phone. Under the desk there likely was a foot pedal for the railroad phone, a “push to talk” button similar to a two-way radio.

Continuing to the right, you can see green train order forms hanging on a hook under the shelf. Hanging at the right edge of the photo are a bunch of train order strings cut to length. The strings were used to tie train orders and other paper work together and fasten them to the hoop or fork employed by the operator to give the orders to the crew members on passing trains. The typewriter was used for copying train orders and well as messages from the dispatcher. On clipboards hanging from and between the windows are the various paperwork of train lists, messages, bulletins, special instructions, job vacancy bulletins, and other documents kept for reference; the paperwork behind moving the trains.

The classic old wooden Milwaukee Road depot at Plummer (renamed from Plummer Junction) was slated to be torn down soon when this photo was taken on November 5, 1975. By the end of February 1976, this depot would be vacant, replaced by a utilitarian brick, box-like train order office nearby. 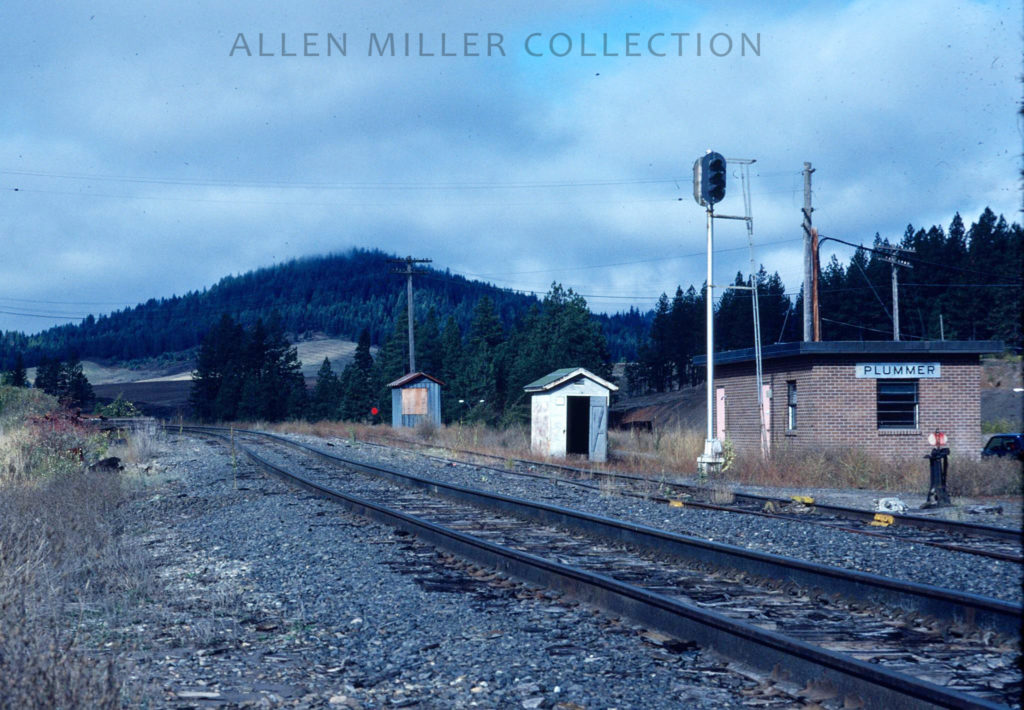 The new brick depot seen here on the right was built in 1976. This was the third Milwaukee Road depot at Plummer. The first depot was probably closer to the platted town, which is where the Union Pacific depot was located. The big rustic depot seen in the previous photos was built in February 1914, when the line to Spokane was constructed. It was known as Plummer Junction until the early 1960s when it became Plummer on Milwaukee Road train orders, but it was still known as Plummer Junction on U.P. train orders.

Narrative information from Allen Miller and photo from his collection. 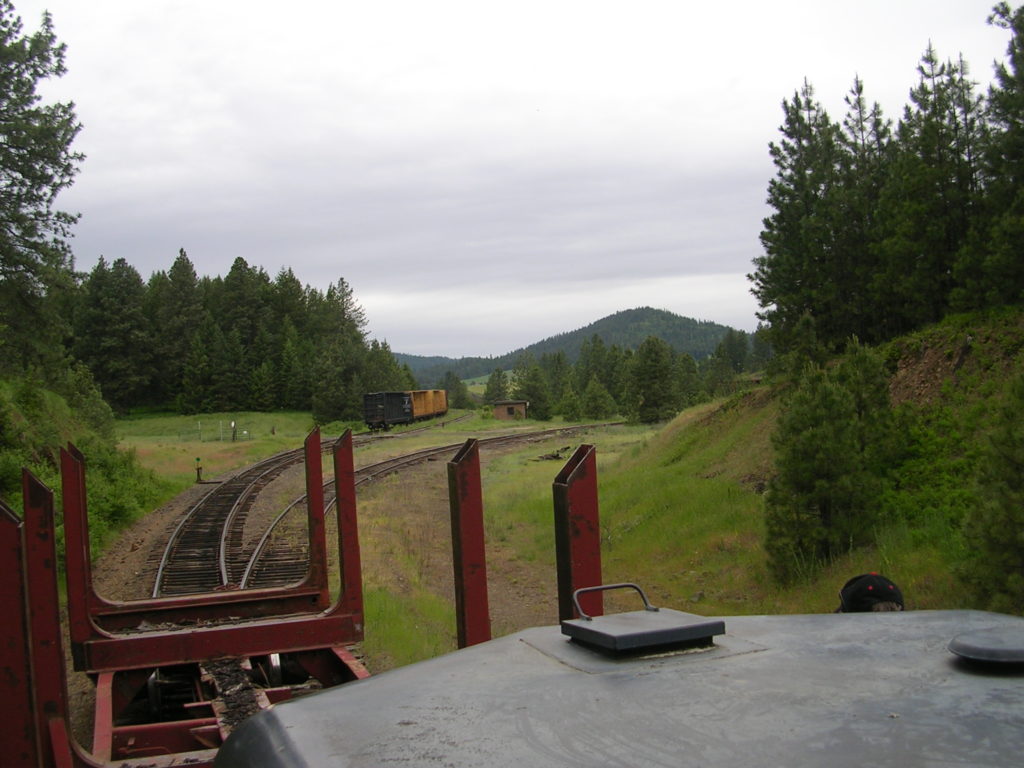 In this 2007 scene, a train on the St Maries River Railroad is heading west into Plummer to interchange cars with the Union Pacific. Straight ahead is the former Milwaukee main line to Malden. To the right, the former Milwaukee line to Spokane, now used by Union Pacific. To the right of the empty cars set out ahead is the abandoned brick train order office that replaced the Plummer depot. That is an empty Milwaukee Road log-carrying flat car ahead of the locomotive. 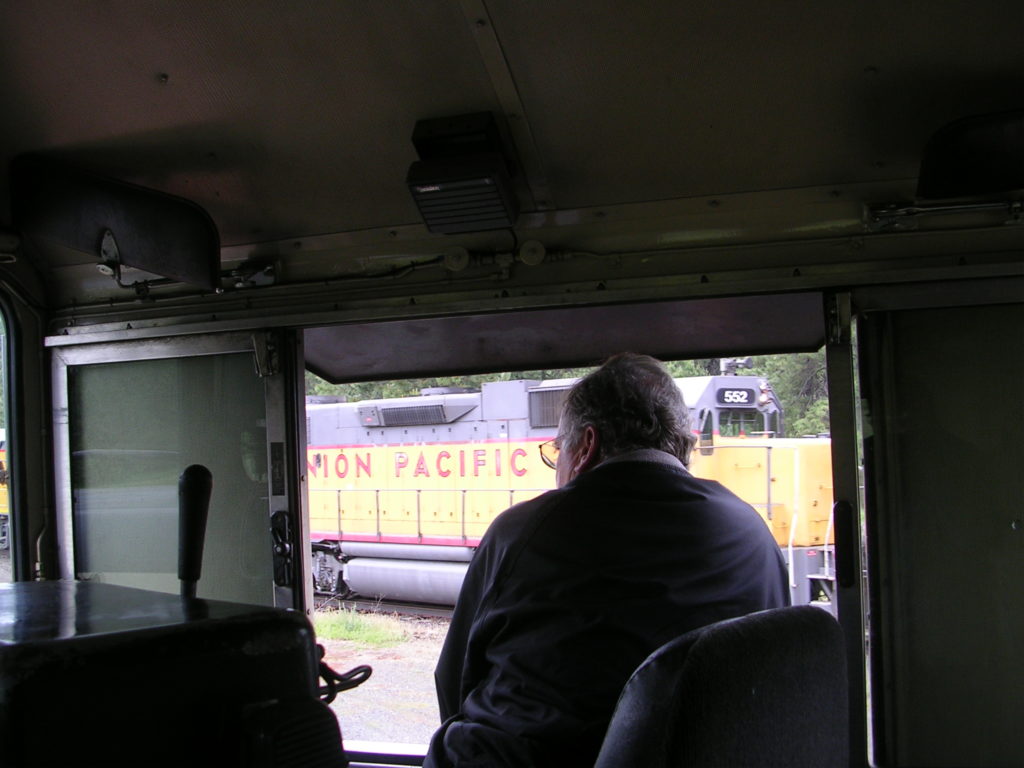 The engineer of the St. Maries River Railroad train watches as he approaches the interchange at Plummer, while a Union Pacific local from Spokane does their own switching. 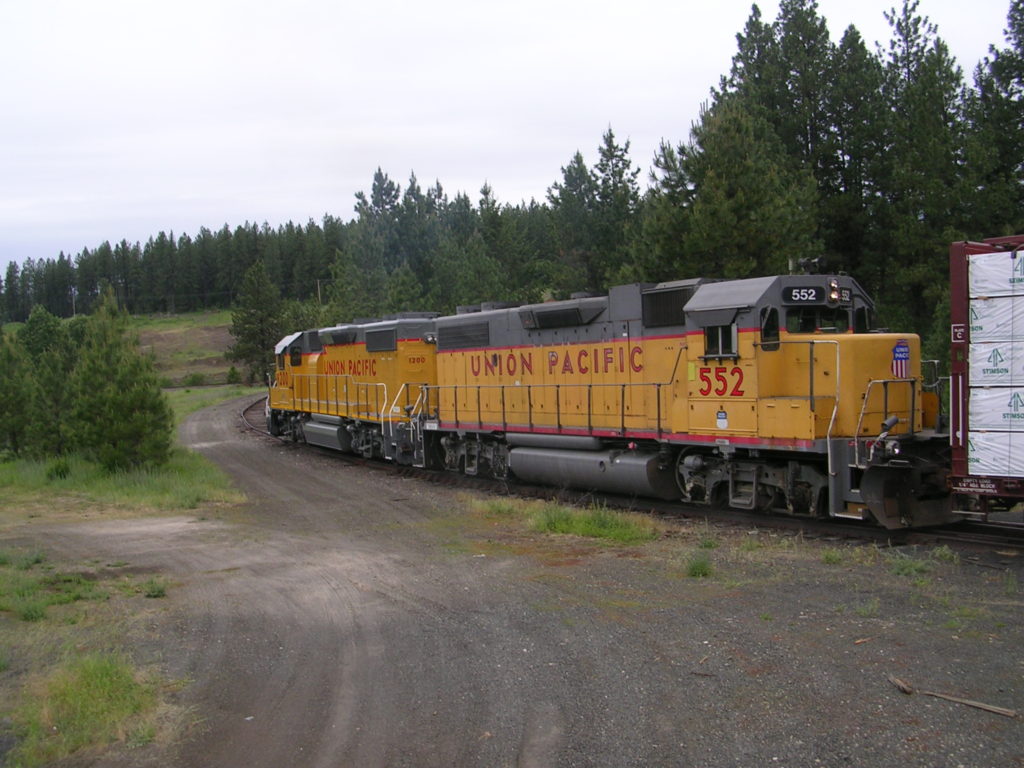 The Union Pacific local with lumber loads on the wye heading to Spokane. 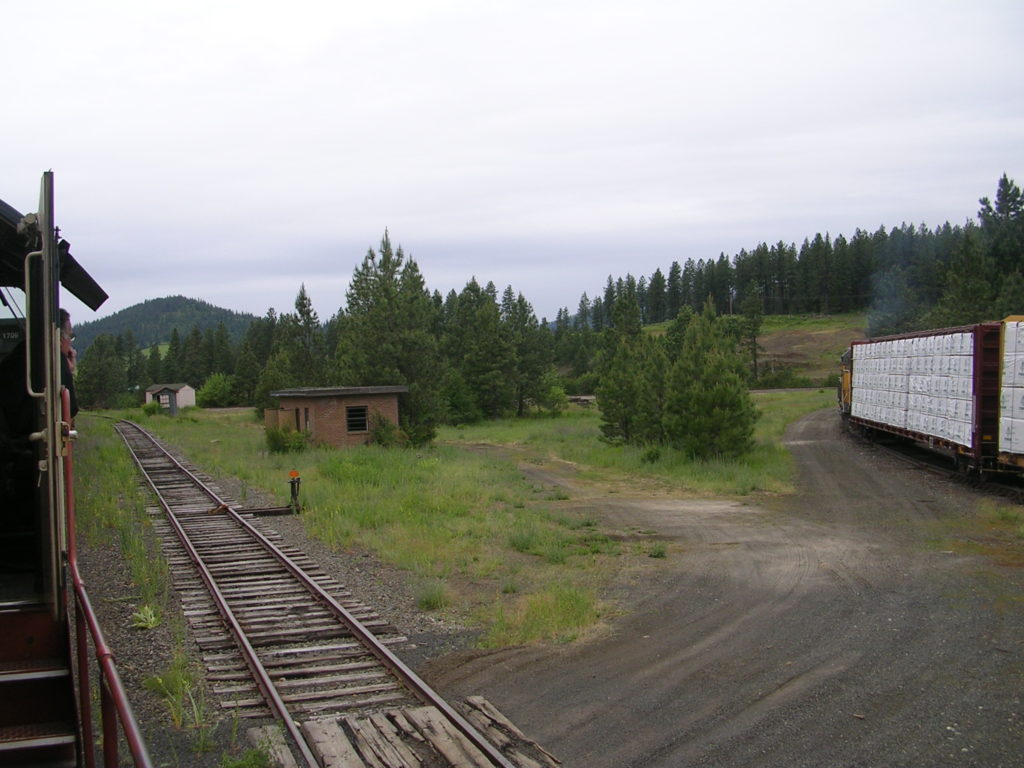 Plummer is just a shadow of itself compared to when the Milwaukee Road ran through mainline freights, as well as the Olympian and Columbian passenger trains via the Spokane line. Still, the railroads here continue to move lumber from the local mills for interchange to the national market.

We’re on the St. Maries Railroad train facing the west, while the Union Pacific turn from Spokane is on the leg of the wye. The vacant and abandoned Milwaukee train order office is no longer a communications center, as train radio has become the primary means of communication.

This 2007 view of Plummer is a scene reminiscent of the earlier Dan Perkins series described by Rob Leachman. The mill at Plummer (towards the right) is served by the Union Pacific. 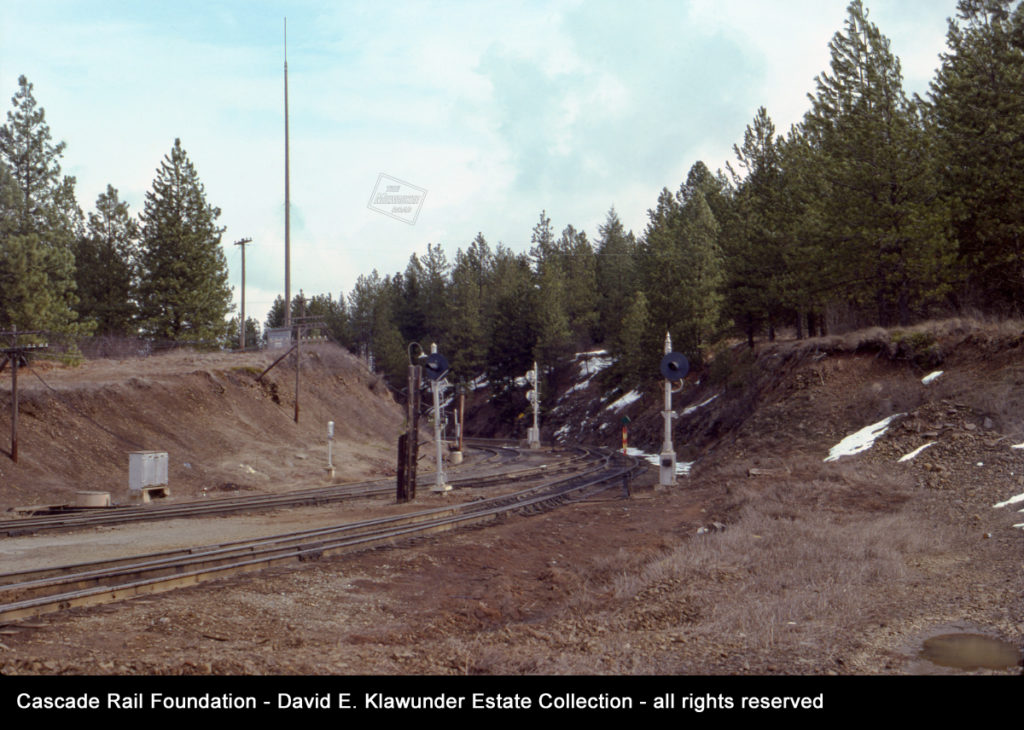 Looking east at Plummer on March 23, 1975, we see the signals for the junction. The Milwaukee Road trains from Spokane came in from the left, the mainline is toward the right.  Beyond Plummer to the east, the Milwaukee Road had block signals in place, ending the “dark territory” we’ve been traveling through since Marengo.

This concludes our virtual tour across the Milwaukee Road. Thank you for traveling with us on our historic journey. 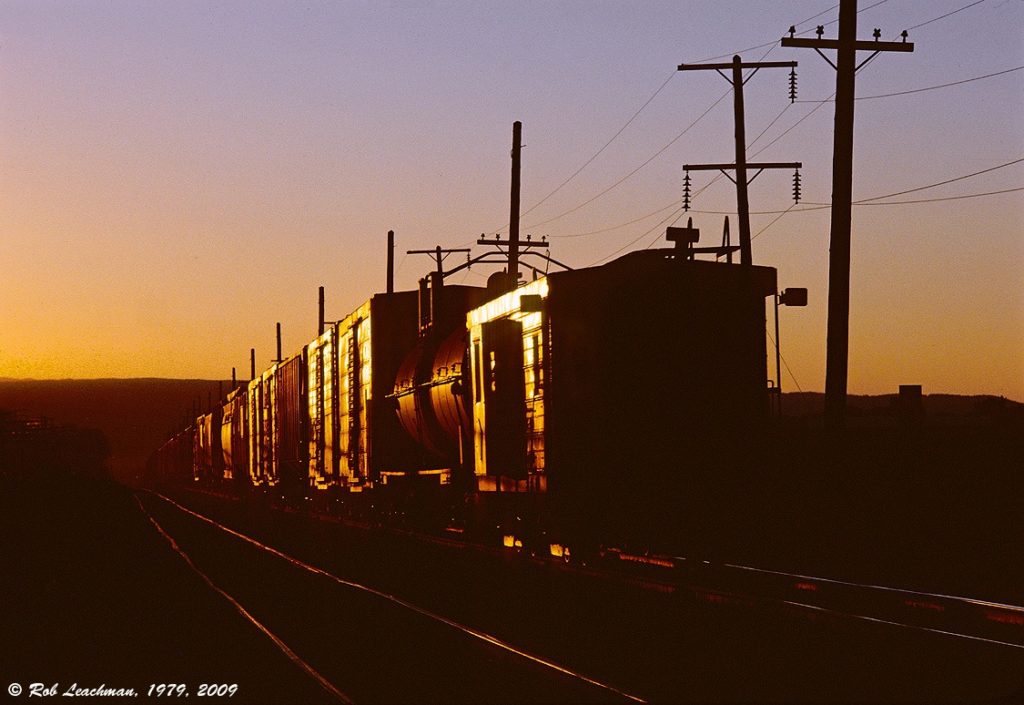