Today we will explore Othello on our virtual tour of the Milwaukee Road. The John Wayne Pioneer Wagons and Riders group detours from the Milwaukee Road at Smyrna on their ride because rail is still in place. They bypass Othello for a rest day at Warden.

Othello was an important Milwaukee Road location. It served as a crew change point, it had a roundhouse, and it was well-known for being the eastern end-point of the Coast Division electrification. The unelectrified stretch, from Othello east to Avery, Idaho was known as “the Gap”.  From 1920 into the early-1970s, Othello was where steam locomotives (and later diesels) would be changed out for electrics to handle westbound trains to Tacoma and Seattle. Eastbound, the electric motors were replaced by steam or diesel. 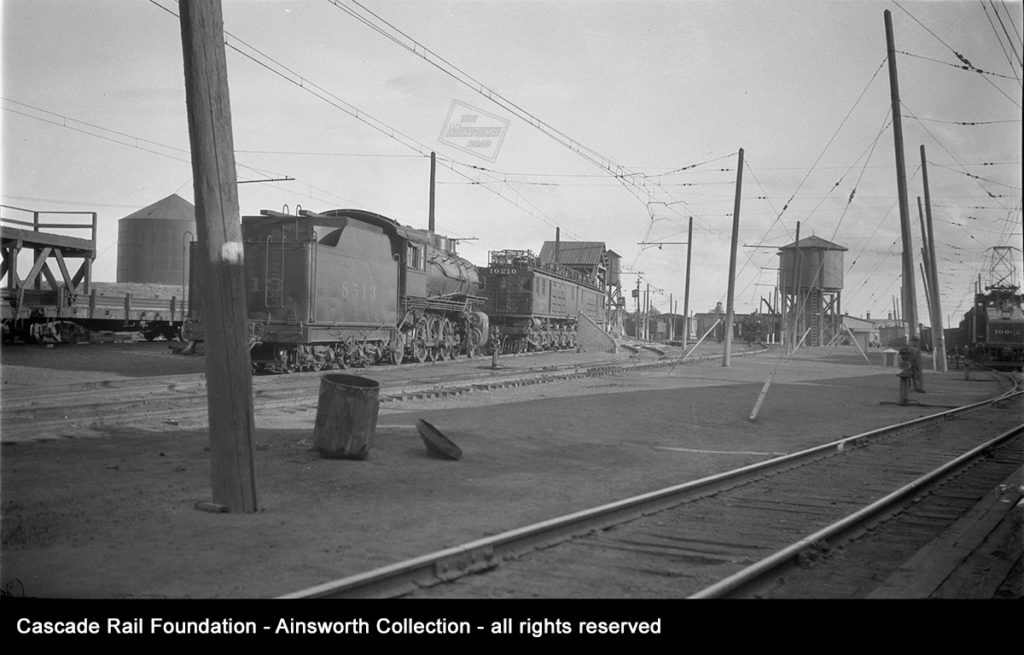 This view, believed to be around 1920, shows the early power for the Coast Division electrification. Steam locomotives from the east and electrics from the west shared the roundhouse and shop tracks. On the extreme right, the electric steeple cab switch motor is a bit of a rarity at Othello. It didn’t stay in Othello very long. Photo by an unknown photographer in the Cascade Rail Foundation Walt Ainsworth collection. Caption information provided by Rob Leachman and Paul Krueger. 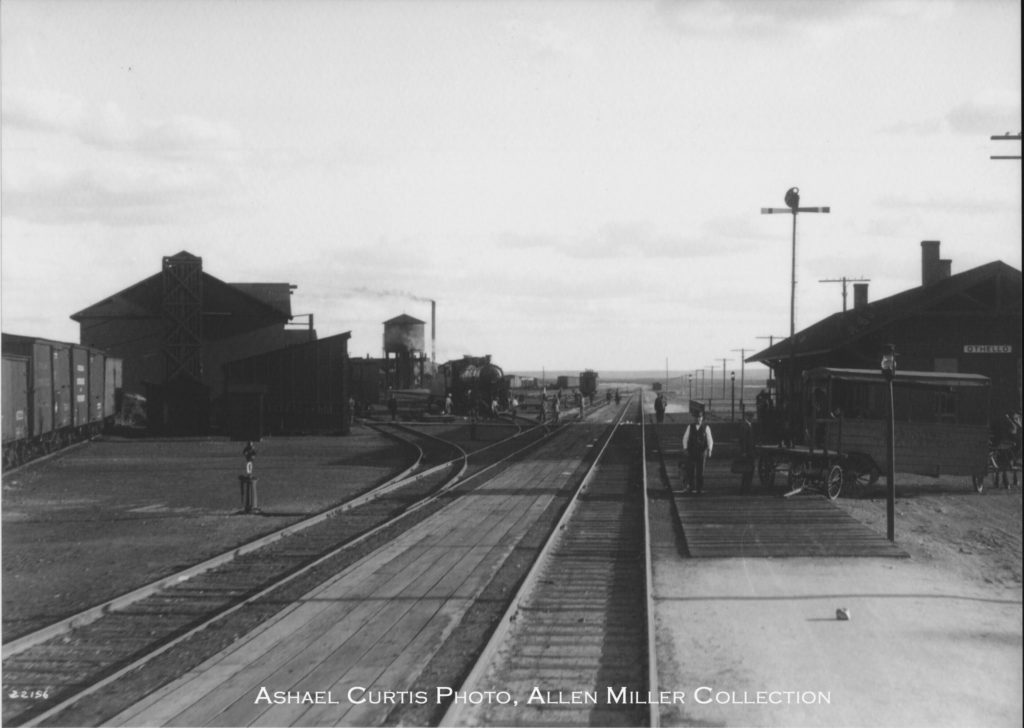 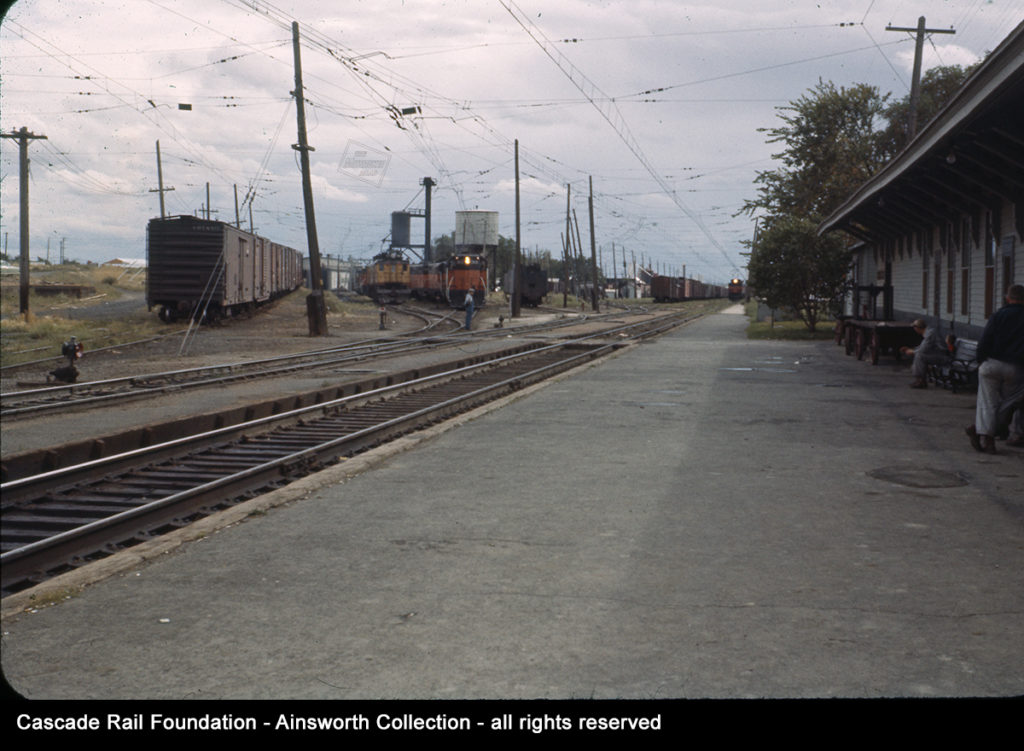 Here is a similar view to the one above from 1910  This photo is undated, but likely from 1958 or early 1959. The depot to the right had a lunchroom to serve crews and passengers. The tracks to the left go to the roundhouse and shop tracks for servicing electric and diesel locomotives.

The headlight on the mainline track on the left heralds the arrival of train from the west. The eastbound freight, led with an electric motor, is coming in for a crew and locomotive change. Just to the right, a team of GP9 diesel locomotives will be the replacement power, to continue the eastbound journey to Avery, Idaho. The train is likely 264, probably running off of its timetable schedule as an extra given the white flags on the replacement diesels. Next to the freight diesels is a yellow-painted semi-streamlined box motor used to power the Olympian Hiawatha. All of this is part of a routine that continued here for many decades. Photo by an unknown photographer in the Cascade Rail Foundation Walt Ainsworth collection. Caption information from Rob Leachman and Ryan Reed. 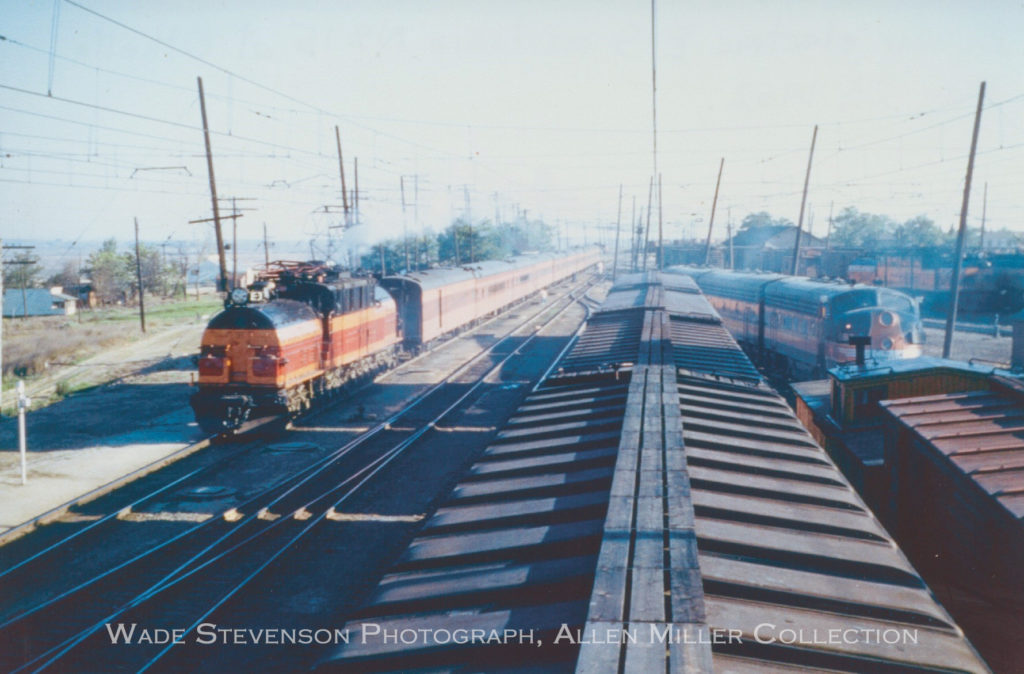 Here we see the Olympian Hiawatha, train #15, the westbound premier passenger train from Chicago on May 23, 1952. It is about to depart the Othello depot with electric bipolar motor E-3. The diesels bringing the train into Othello from the east were removed and placed on a roundhouse or shop track to the right of the scene. The process would be reversed eastbound; electrics replaced by steam or diesel.

This photo by Wade Stevenson. Stevenson was an Othello roundhouse and shop employee, passionate about photographing the Milwaukee Road and other railroads. His status as an employee and semi-officially sanctioned photographer gave him the ability to capture images from normally off limits places, like the top of a boxcar. Photo and caption information courtesy of Allen Miller. 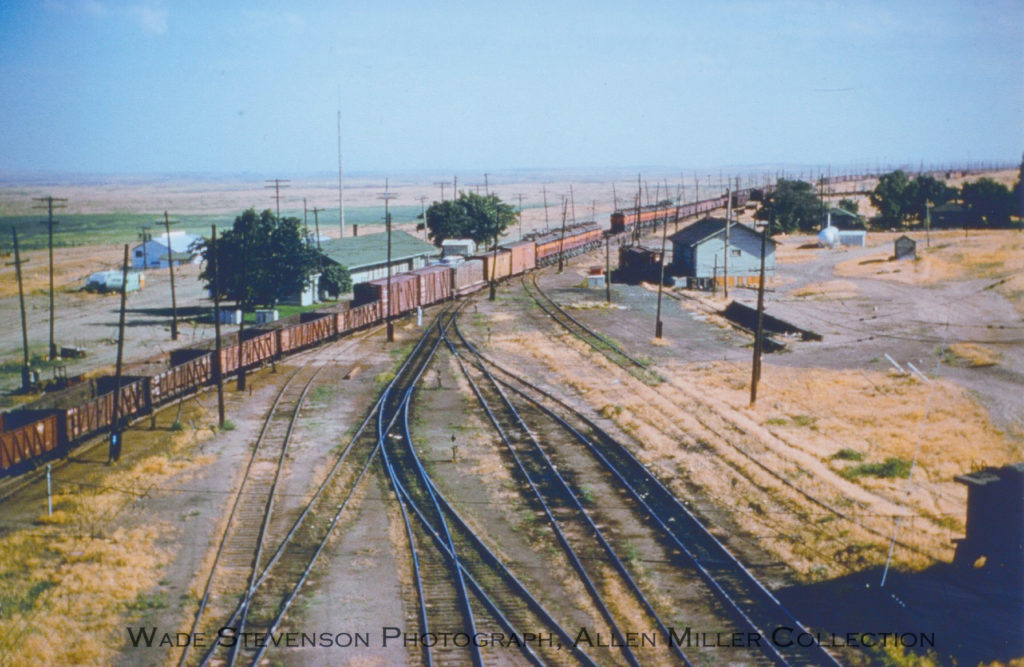 East meets west at Othello with two freight trains meeting in front of the depot. The train closest to the photographer is likely heading into the East Yard, built in 1958. The train seen approaching the camera, already has its electric motors on to carry west into the electrified zone. Wade Stevenson photograph, courtesy of
Allen Miller. 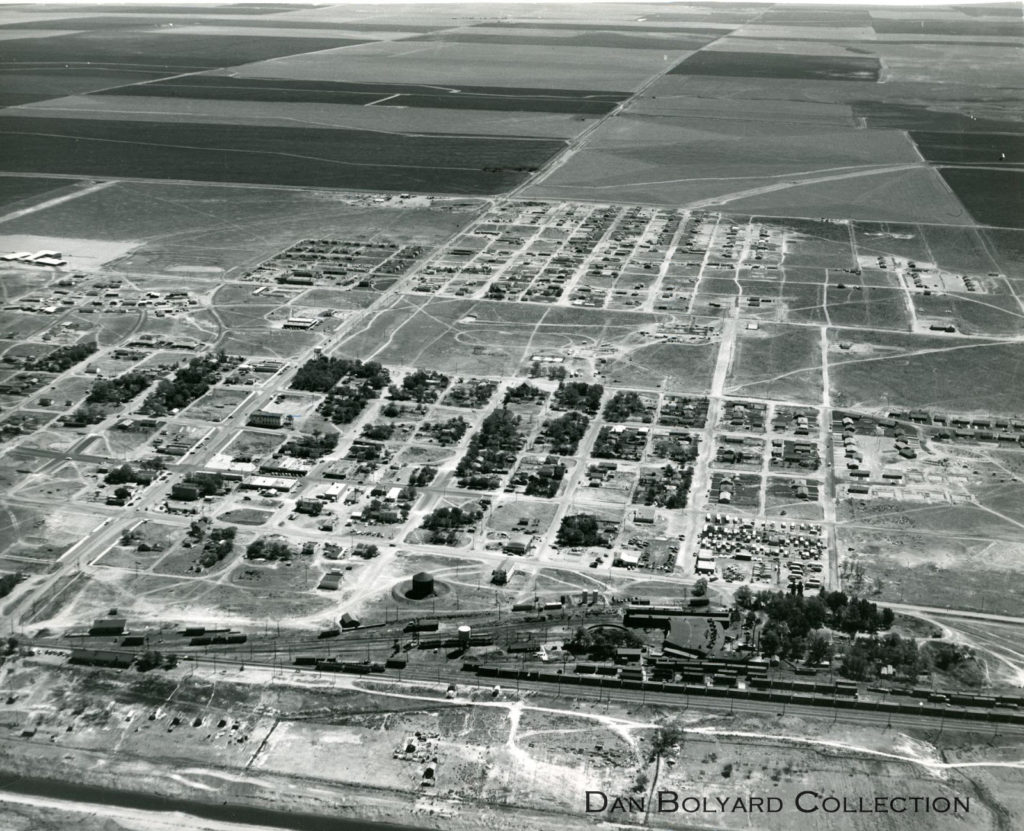 Here is an undated aerial view of Othello shows shows a portion of the Milwaukee Roads operations in the community. This is looking nearly due east, but the railroad orientation here is railroad east to the left and west to the right. To the left is the depot, with the main line as the lower tracks. The roundhouse and servicing tracks are above the main line tracks in this view, with a turntable and various maintenance, supply and support buildings. The Milwaukee had freight yards both east and west of this photo, which are not pictured. The photo is thought to date from 1955, which would predate the construction of the east yard in 1958.

Othello’s main street is the wide street to the left of the depot, and it extends straight into the countryside at the top the edge of the photo.

Photo by an unidentified photographer, courtesy of Dan Bolyard.

Engine 367 leads an eastbound freight out of Othello past the depot. The refrigerator cars at the head end serve to highlight the importance of the perishable traffic that moved out of Othello and Warden. These rich agricultural communities within the Columbia Basin irrigation project would originate traffic for the Milwaukee Road. Even today, perishable traffic moves on former Milwaukee rails from this area, now handled by short line railroads. Photo by an unknown photographer in the Cascade Rail Foundation Walt Ainsworth collection. 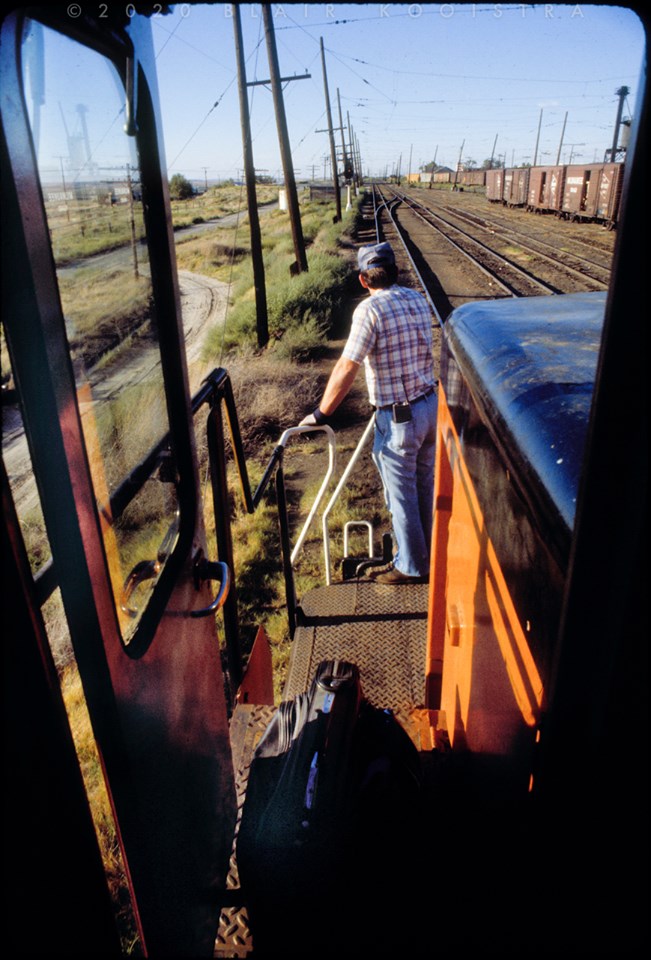 Arriving at Othello on eastbound freight train #200, brakeman George Katalanich prepares to get off the train as it pulls down the mainline for the crew change. Blair Kooistra took this photo on September 8, 1979. Photo used with permission.

Milwaukee Road 156, Milwaukee Road’s bicentennial unit, is departing Othello on its way west in June 1976. Here the train westbound is about to enter a sweeping curve, leaving the Othello yards and heading into the countryside towards Taunton. At this point the route will be due west leaving Othello. In Othello itself, the railroad had a relatively north-south orientation. This is another Wade Stevenson photograph courtesy of Allen Miller.

The 156 was a photographer’s favorite in its bicentennial colors. It is the same locomotive pictured at Renslow two years later on day six of this tour. Unlike the power consist seen earlier in the tour, this colorful locomotive is the lead unit in this view and provides a proud tribute to America’s 200th Birthday. 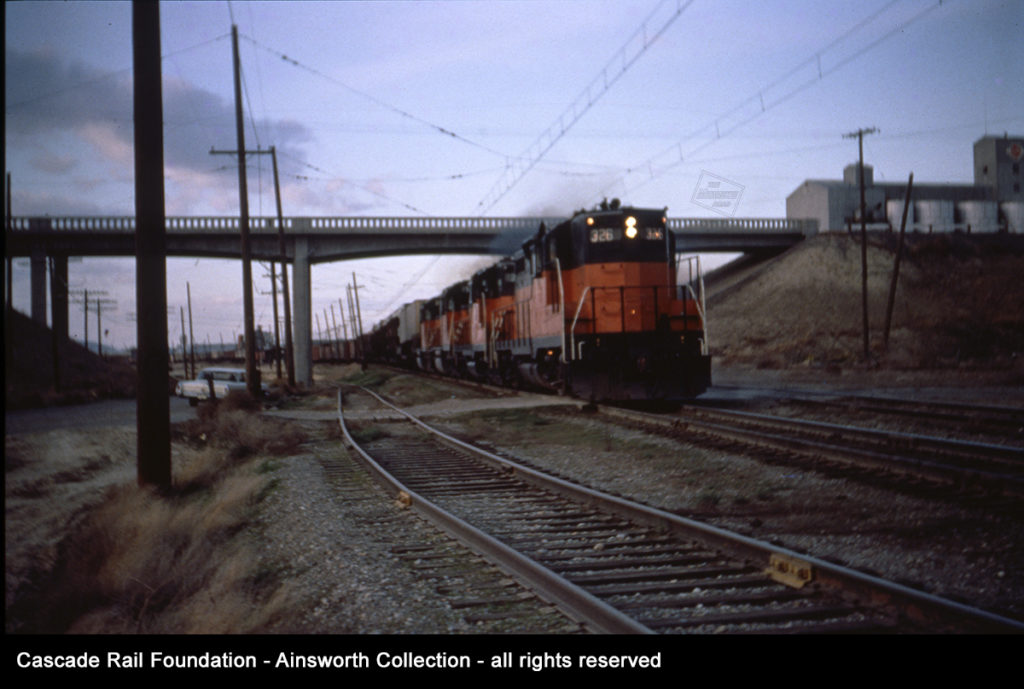 Engine 326 leads train 261 west out of Othello under Highway 26 in April 1965. In those early years of its operation, schedule of train 261 was fast enough to make an 8  p.m. arrival at Seattle, just 55 1/2 hours from Bensenville, IL outside Chicago. Photo by an unknown photographer in the Cascade Rail Foundation Walt Ainsworth collection. Caption information from Rob Leachman. 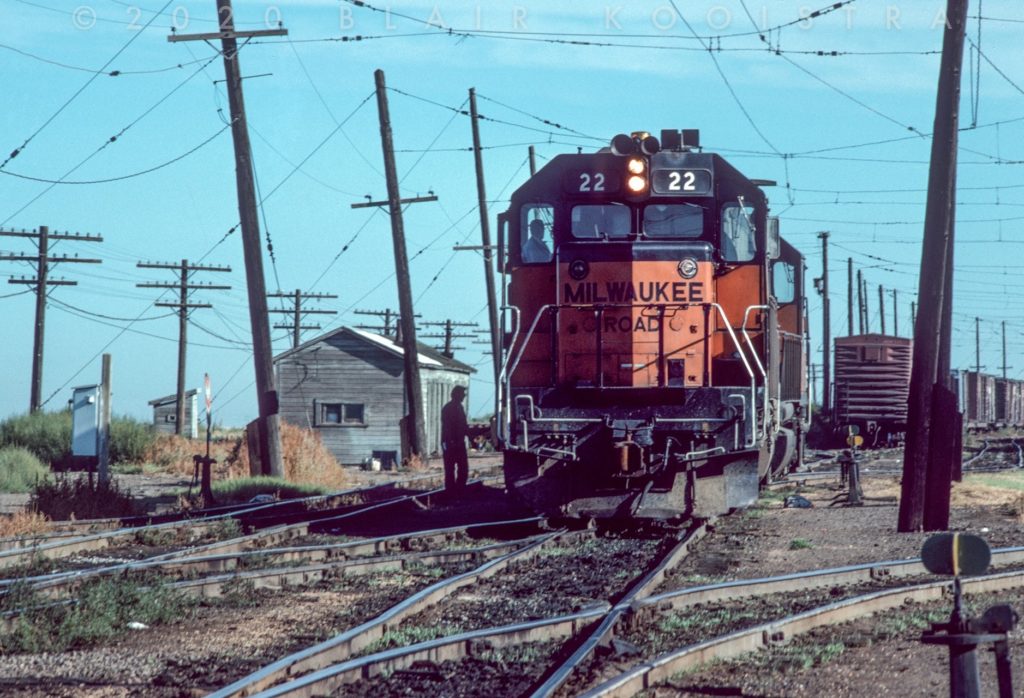 A crew is switching the east yard at Othello in August 1978. The remnants of the catenary and overhead wire system of the electrification, gone for several years, still lingers. The Milwaukee Road tracks would continue to deteriorate, and less than two years later this scene would be a memory. The Milwaukee Road would be gone in March 1980. Blair Kooistra photograph, used with permission. 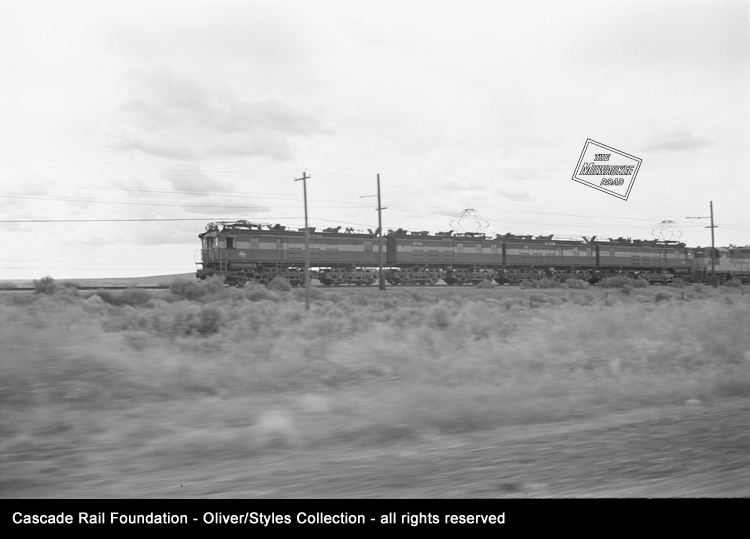 After touring the Milwaukee Road from Cedar Falls to Othello, we take one last parting shot of Milwaukee Road’s venerable Coast Division electrification. It was dedicated with fanfare and headlines on March 5, 1920 and it served its owner well. It faded into neglect and oblivion as its was phased out unceremoniously in 1972 in Washington. In this view motor E25, an EF-5 boxcab set, runs at speed outside Othello as it works with a GP9 diesel to get the traffic moving. Photo by an unidentified photographer in the Cascade Rail Foundation Gary Oliver collection. 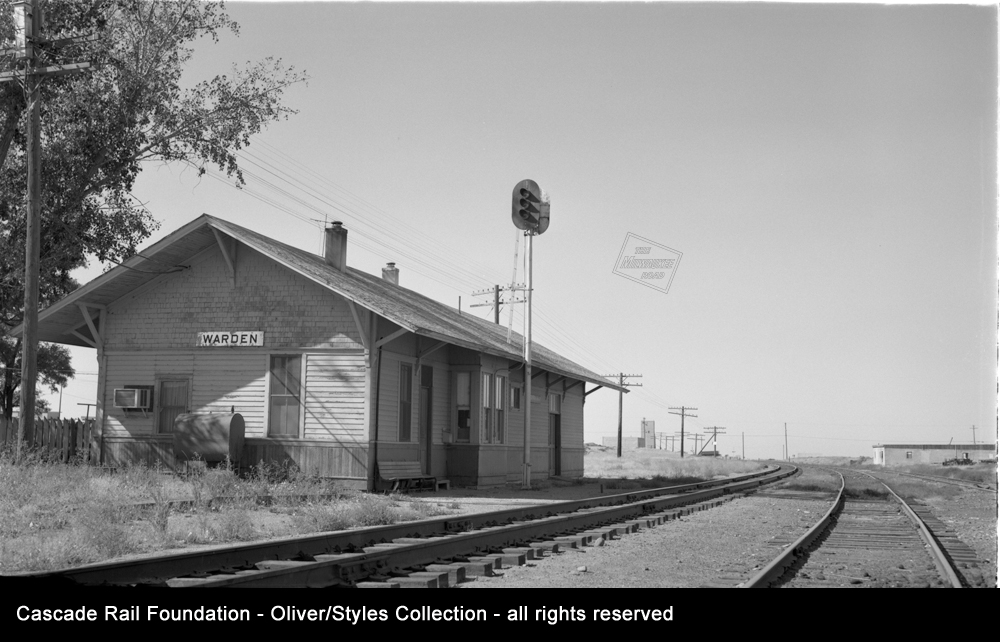 After Othello, we head into Warden as the first section of our trip across the unelectrified “Gap”. Warden is nearly 13 miles east of Othello and the end of our daily journey. Warden was a junction to the Moses Lake and Marcellus Branches, the latter serving a string of tiny communities, mostly just grain elevators. This depot was moved into town and now serves as a community museum. Photo taken in September 1975, probably by Stan Styles. Photo in the Cascade Rail Foundation Gary Oliver collection.

At Warden, we rejoin the John Wayne Riders on their cross-state ride after their rest day. Tomorrow our virtual Coast Division tour takes us into from Warden to Lind, into the Channeled Scablands.