Another anonymous donor has stepped forward with an exciting fundraising challenge that helps both the 5057 Project and the overall development of the South Cle Elum Rail Yard Interpretive Center!

The Cascade Rail Foundation Capital Fund is dedicated to supporting major capital improvements at the South Cle Elum Rail Yard Interpretive Center, such as the purchase of Substation Operator Bungalow #1, the rehabilitation of the Substation, and other similar projects that are part of the Strategic Plan for developing the Interpretive Center. 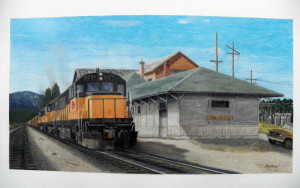 Gary Pember brought by the nearly-completed picture of the 5057 in Cle Elum for a sneak peak.  He has titled it “Dead Freight East” and it depicts Cle Elum as it was in 1979.  We’re very fortunate that Gary has chosen to share his artistic talent with us. Everyone who donates at least $505.70 (through either a single donation or multiple donations) to the project will receive a print of this artwork as a thank you!  Here is a photo:

We now have a signed purchase agreement for the 5057 with Feather River Rail Society and have made the first payment of $10,000 toward the $25,000 purchase price of the locomotive.  We need to raise the remainder by March 1, 2013.