We have a multiple phase plan to acquire, cosmetically restore, and display the 5057 in the South Cle Elum Rail Yard Historic District.

The first phase of our project was to acquire the 5057 from the Feather River Rail Society (Western Pacific Railroad Museum) in Portola, CA.

The purchase price was $25,000 and included some spare parts, most notably a traction motor to replace the bad one on the locomotive. 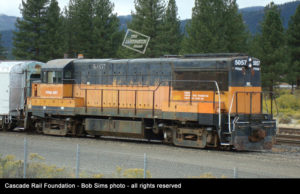 The second phase of the project was moving the 5057 from Portola, CA to the Pend Oreille Valley Railroad (POVA) shop in Usk, WA. We can’t do the cosmetic restoration work in the South Cle Elum Rail Yard, so we are paying the staff at POVA to do the work for us. 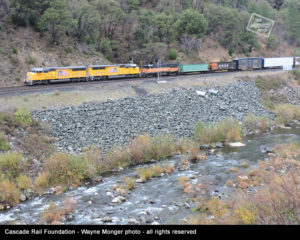 With the assistance of the Feather River Rail Society, our volunteers were able to get the brakes on the 5057 working and complete the other work we needed to do so it could be shipped to Usk by rail. 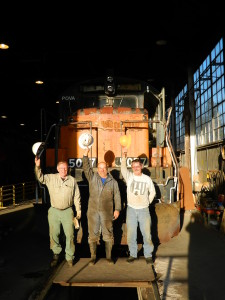 Moving the 5057 to Usk cost about $3,500. It would have cost much more, but BNSF donated its portion of the transportation charges.

Phase 3: Cosmetically Restoring the 5057 – IN PROGRESS

The cosmetic restoration of the 5057 has two distinct, major tasks. The first is to prepare the locomotive to be painted. This includes addressing the rusted out metal (mostly on the cab), replacing broken latches on the hood doors, replacing missing parts, and other things. We plan to have them replace the bad traction motor as well. The second major task is to repaint the locomotive with high quality coatings. 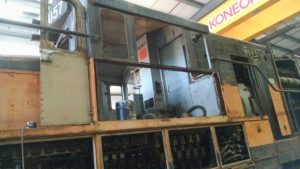 Sheet metal replacement on the cab. (Photo courtesy of POVA)

Before the 5057 can be moved to the South Cle Elum Rail Yard, we need to prepare a place for it to be displayed. A section of track will need to be relaid in the rail yard for the locomotive. We also plan to build a fenced shelter to protect the 5057.

We plan to work with State Parks to finalize the location where the 5057 will be displayed in early 2018 so we can start working on building the track. Our intention is to eventually construct a climate-controlled exhibit hall to display the 5057. With that in mind, we want to locate the initial display site so the 5057 could be rolled into the planned exhibit hall once it is completed. 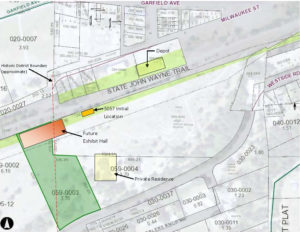 This is the most expensive aspect of the project. We plan to move the 5057 on its own wheels again to get it as close as we can to the South Cle Elum Rail Yard. From there, the locomotive will need to be lifted with cranes and placed on a special truck designed for extremely heavy loads. The 5057 weighs about 250,000 pounds intact. We can reduce the weight some by separating the body of the locomotive from its trucks for the move and reassembling it in the Rail Yard.

Based on estimates we got at the beginning of the project, we think the final move will cost between $60,000 and $100,000.  Unlike other aspects of the project, this is not a cost we can breakdown into smaller expenditures.