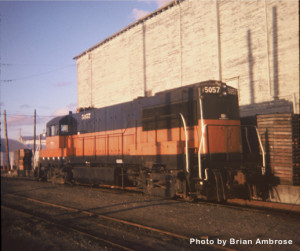 The 5057 is seen leading a train out of Tacoma in January 1980, three months before the Milwaukee Road abandoned the Pacific Coast Extension. Photo by Brian Ambrose.

The 5057 was one of 12 General Electric U25B locomotives purchased by the Milwaukee Road in 1965.  They were initially assigned to the railroad’s most important freight trains between Chicago and Tacoma.  Within a few years they were reassigned to trains at the east end of the system, until the Milwaukee Road decided to base their General Electric locomotives in Tacoma in 1971.  During the 1970s, the 5057 and the rest of the U25Bs were commonly seen on trains on throughout Washington. The 5057 itself helped pull trains from Tacoma on the mainline through South Cle Elum during this period, as well as trains to Bellingham, WA and Portland, OR. 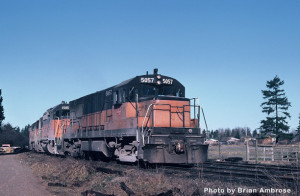 When the Milwaukee Road abandoned Washington in 1980, the 5057 helped pull one of the last trains eastward.  Of the locomotives that pulled the last three trains out of the state, only the 5057 and fellow U25B 5056 are still intact.  The others have been scrapped or substantially reconfigured. The 5056 is preserved at Illinois Railway Museum in Union, IL.

You can read more about the 5057 at the Western Pacific Railroad Museum web site.

This site uses Akismet to reduce spam. Learn how your comment data is processed.