Some our most stalwart volunteers retired from their work with Cascade Rail Foundation this year.  If you’ve visited the depot in South Cle Elum, you’ve probably met them.

Lorna and Fulton Toub have been volunteering at depot since 2008.  The Toubs had a big impact from the start, receiving our Volunteer of the Year award the first year they were with us.  They’ve been opening the depot to visitors on weekends and helping out behind the scenes with a variety of tasks.

Lorna and Fulton Toub at the 2008 CRF Annual Picnic

Our President, Bruce Reason, retired late this year. He has been on our Board of Directors since March 2006 and has served as President since January 2008. In addition to having a leadership role at Cascade Rail Foundation, Bruce took on a myriad of tasks around the depot and the rail yard. Among these, he has been opening the depot to visitors when the Toubs have not been available.  Like the Toubs, Bruce had an immediate impact on our organization and also received our Volunteer of the Year award the first year he was with us (2006). 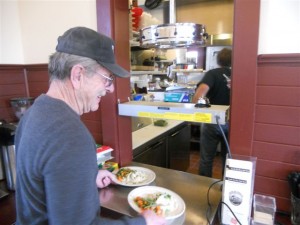 The contributions of the Toubs and Bruce will be greatly missed.

Brian Lee is our new President, and Mark Borleske replaces Brian as our Vice President.