Volunteer of the Year Announced – September 2011

At the annual volunteer/community picnic this month, Cascade Rail Foundation (CRF) announced that the Volunteer of the Year is Paul Krueger.  Paul has been on the CRF Board of Directors since 2004 and serves as the Secretary. 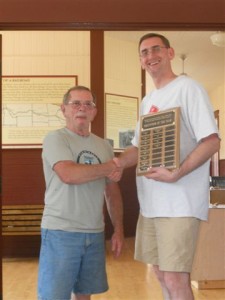 Bruce Reason (left), CRF President, congratulates Paul Krueger for being selected as Volunteer of the Year

In September 2010, CRF became a member of the newly established Pacific Northwest Railroad Archive (PNRA) in Burien, WA.  Leasing space at PNRA provides CRF with an expanded capacity for storing archival collections in a facility beyond the scope of what CRF could accomplish by itself.   By joining with the other railroad history organizations at PNRA, CRF will make the history of the Milwaukee Road much more accessible to the public.

Paul was instrumental in CRF joining PNRA.  He now serves as the CRF representative on the PNRA Board of Directors and also coordinates the monthly CRF volunteer work parties at PNRA.   Volunteers have inventoried more than 60 boxes of records in the past year. In addition, Paul led the effort to secure an $18,500 grant for PNRA this year that will support digitizing thousands of dispatcher train sheets at PNRA, including many in the collections of CRF. With Paul’s leadership this past year, CRF has made great progress toward realizing the potential of its archival collections.

While Paul is the recipient of the Volunteer of the Year award this year, his accomplishments this past year did not occur in a vacuum.  They build upon the contributions of those who helped get CRF into a financial position where it could afford to support an archival collection, those who have entrusted CRF with archival material, and those who are contributing time to organize, document, and digitize the CRF collections.  CRF thanks all of its partners in preserving the history of the Milwaukee Road in Washington.  THANK YOU!