Cascade Rail Foundation was pleased to host the participants in the Mountains to Sound Greenway Trust 20th Anniversary Trek.  Trekkers started arriving at South Cle Elum early in the afternoon on Sunday, July 3 after spending the night in the Ellensburg area. 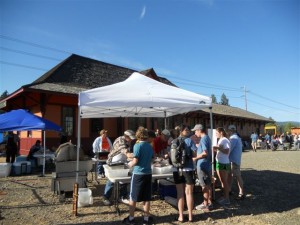 A gathering of roughly 120 trekkers and 60-80 others from the community were at the site for music and food. Music for the evening was performed by two local bands, The Blast Ended Skrewts and Mr. E Band. Food was available from both Glondo’s Sausage and Cascade Rail Foundation.

After camping overnight in the rail yard the trekkers were up early, starting breakfast at 6:30 AM on July 4th with complimentary coffee for all provided by CRF.