Engineer Gene Lawson made his final departure on Friday, November 21.   He was 87.  Gene is survived by his wife Vera, three children, and five grandchildren.

Gene came from a Milwaukee Road family.  His father Lloyd and mother Blanche met while they were both working for the railroad to help build the electrification system in Washington.  Lloyd later worked as a substation operator in Taunton and Kittitas, WA.  Growing up along the tracks, Gene knew he wanted to work for the railroad.  After a tour in the Navy, he started with the Milwaukee Road on August 15, 1950 as a fireman with seniority between Cle Elum, WA and Avery, ID.  In 1957, Gene promoted to engineer.  During his career working for the Milwaukee Road, he frequently worked between Othello and Cle Elum.  Gene spent time as an engineer on the helper engines based in Beverly, WA, and also worked the branch to Hanford from Beverly.   Aside from running the Olympian Hiawatha, his favorite job was running the electric locomotives. 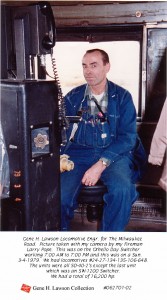 At the end of Milwaukee Road operations in Washington, Gene was the engineer on the third to last train leaving Tacoma, bringing it from Cedar Falls to Cle Elum.  His last trip into Cle Elum was documented by author Blair Kooistra in his September 1980 Trains Magazine article “How the Milwaukee Road packed up and went home from the West”.  Milwaukee Road 5057, now owned by Cascade Rail Foundation and being restored for display in South Cle Elum, was one of the locomotives on that train.  Gene was the last engineer to bring it into Cle Elum.

Gene has been a special friend to Cascade Rail Foundation from the very beginning of our work.  He frequently attended events at the depot in South Cle Elum, inspiring volunteers and guests with his stories.  You can see interviews of Gene and his wife Vera from our 2011 Milwaukee Road Employees Luncheon on our YouTube site.

We should all be so fortunate to love our jobs as much as Gene loved being an engineer for the Milwaukee Road.  We will greatly miss hearing his tales and anecdotes from his time working for the railroad.

A full obituary can be found at www.steward-williams.com.

If you wish to make a memorial donation to the 5057 Project through our web site, please email us using the address on the PayPal receipt to let us know your wishes.